Just about to step out into a new wilderness for me, namely the 21st century road.

I had a very productive year in 2021 health wise with a huge loss of weight and the reversal of my type 2 diabetes, this years challenge though is to continue that good work and keep the weight off!
I like mucking about off road but I've also always enjoyed road riding (ps I'm one of the polite ones who believe in riding sensibly, defensively and at all times I try to consider other road users and will always acknowledge any other rider!)

The road is obviously convenient if you wanna pop out of a lunch time for a quick spin etc but near the end of last year I thought I should step it up a notch and join a local club just to see if I could hack it.
Contrary to popular belief my local club was on the whole very friendly, but we had a bit of a miss-communication over what we regard as a "RetroMod". My idea of using a steel 80's Claud that's been re-spaced to accommodate a predominately 2005 DuraAce 2x10sp group-set didn't line up with their idea of a frame from the naughties with a group from 2015+
Although they were all very nice, some did feel the need to suggest I joined a Vintage club and it wasn't long into the ride that I was unceremoniously "dropped". Never mind, it was what I had expected.
The next gang I tried was a local FaceBook "FLAB" group (Fat lad/lass At the Back) their Strava averages on their social rides were a lot closer to mine (14-15mph over 30 miles) and they also promise to never leave anyone behind, so I signed up.
What a relief, I've met a great bunch of people, some a little younger, some a little older and none seemed to care a jot about my bike & I kept up with them easily.

So Peachy, why the plastic fantastic? Well I still want to push myself and attend some faster/longer rides, so to do that I wondered if I should have a go at a more modern bike. Obviously I'm going to look at a Claud first, and although by far the majority of the Claud range from the turn of the millennium have pretty much all been shockingly low end fare but at mid-range prices, one has always stood out and that was the full carbon Torino.
Someone at Falcon had the idea of re-introducing a proper top of the range bike, and took the Torino name from the late 60's Campagnolo Record equipped Holdsworth Claud range topper.
In 2005 the "Mk1" in 3K Carbon had a more traditional geometry, but in 2009 the 12K Carbon "Mk2"arrived looking a lot more sexy and was initially introduced with the very respectable 2x10sp Shimano 105, but of course, the predictable happened and pretty soon the group got down graded to the decidedly average 9sp Tiagra.
Why it was never introduced with a full Campagnolo group is beyond me.

A comfortable ride with decent frame and kit. Tiagra groupset and budget WH500 wheels do the job, but the bike could easily take an upgrade

Claud Butler is a famous old British name now associated with budget bikes. But what’s this? Only a lightweight carbon fibre road bike sporting Claud’s signature in an Ernesto Colnago-like flourish. Okay, it’s from the Far East, not Butler’s original London, but we think Claud would have been happy.
It certainly looks the part, with bold graphics, and even the wheels boasting logos on the semi-deep rims. The kit is quite modest, coming with Shimano’s nine-speed Tiagra groupset and budget WH500 wheels.
We put these through some pretty serious testing though, not just tackling post-winter potholes but also bouncing them along some rough canal towpaths to see if we could knock them out of kilter – we couldn’t. And it wasn’t a bone-jarringly hard ride, the carbon frame and fork and 27.2mm seatpost taking the sting out and keeping teeth intact.
The Torino probably isn’t one for the dedicated competitive rider, its wheelset being a little heavy. But it doesn’t have the extended head tube that some comfort-orientated bikes are specced with, so you could use it for the occasional time trial or triathlon with a set of clip-on tri bars.
The Tiagra kit doesn’t have the cachet or the looks of 105 but its non-concealed cables contribute to a very light shifting action. The compact 50/34T chainset and 11-25T cassette provide a good gear range, and if you want more help on the hills you could go up to a 27T sprocket. Ritchey supply a decent bar, stem, seatpost and saddle, adding to comfort.
Handling is reassuring rather than lightning quick but the bike corners confidently and deals with rapid changes of direction through traffic well. While it’s not super-quick on climbs there are no problems on descents. This isn’t an out-and-out racing snake but it manages to be more than the sum of its parts. It’s a very enjoyable ride, well set up for long-distance leisure and fitness riding.

That line "but the bike could easily take an upgrade" of course had me thinking, so I had a hunt around and found one in amazingly good condition, cheep as chips on FaceBook Marketplace, only an hour & half down the road. Another un-required Covid-lock down reject, I offered an even lower price and the deal was done. With a 22" seat tube it's possibly a little short for me (sizes in old money were 20-3/4", 22", 23-1/4". I'll probably keep one eye open and an ear to the ground for the slightly larger version, but for now I'm going to give this a go.
Plans for an upgrade, well initially I'm thinking of trying out the 2015 Campag Super Record group I've just removed from my lads Colnago (its getting a face-lift) and see how much difference that makes. As it currently weighs in at 20lbs 8oz I think a few choice swap-outs of bars/stem/seatpost/saddle and of course the full group and wheels should make a difference 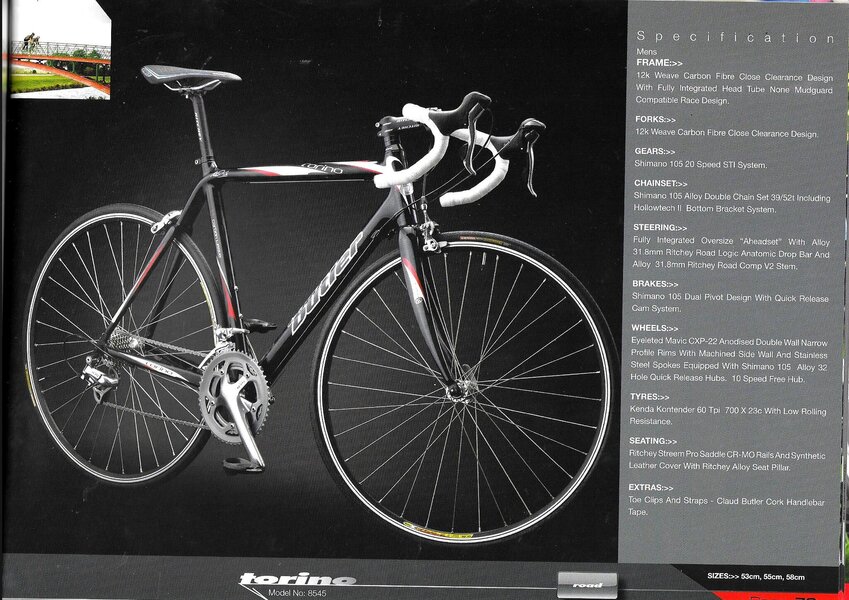 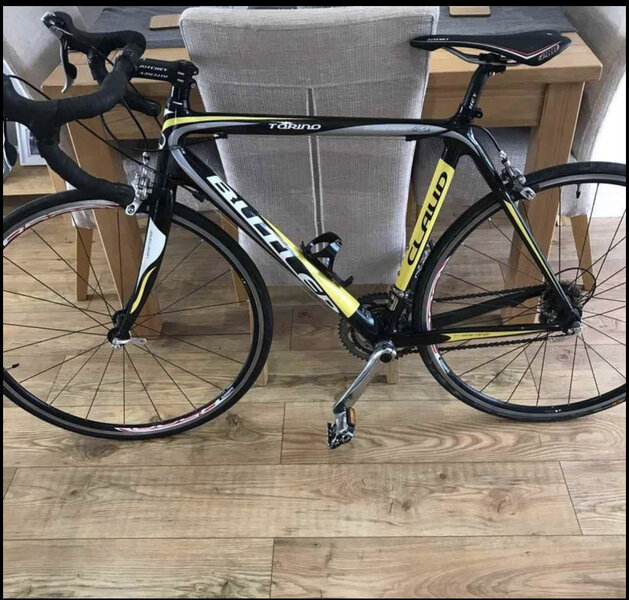 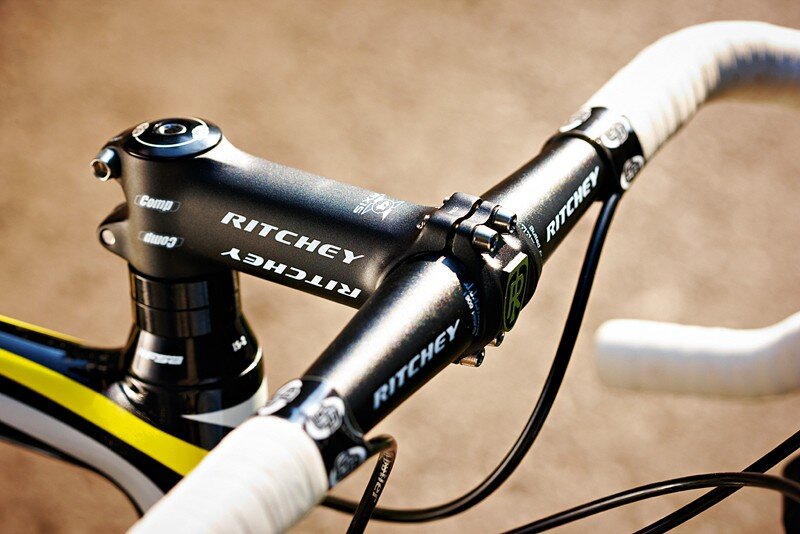 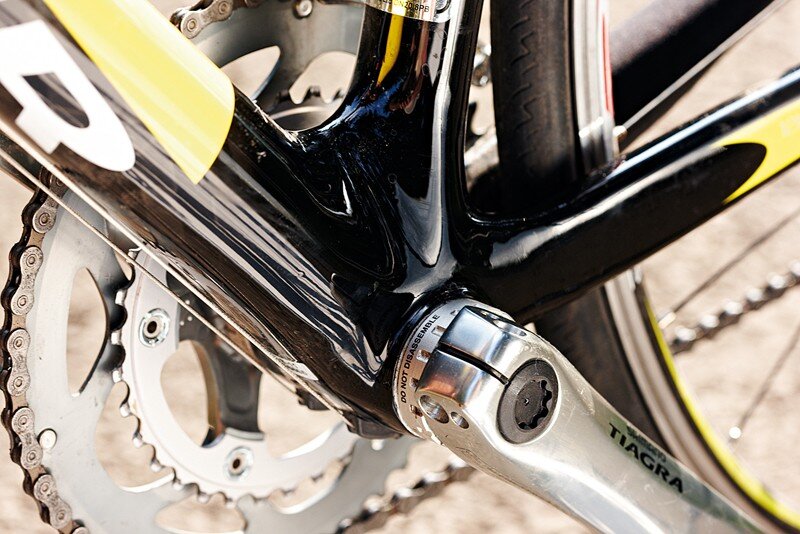 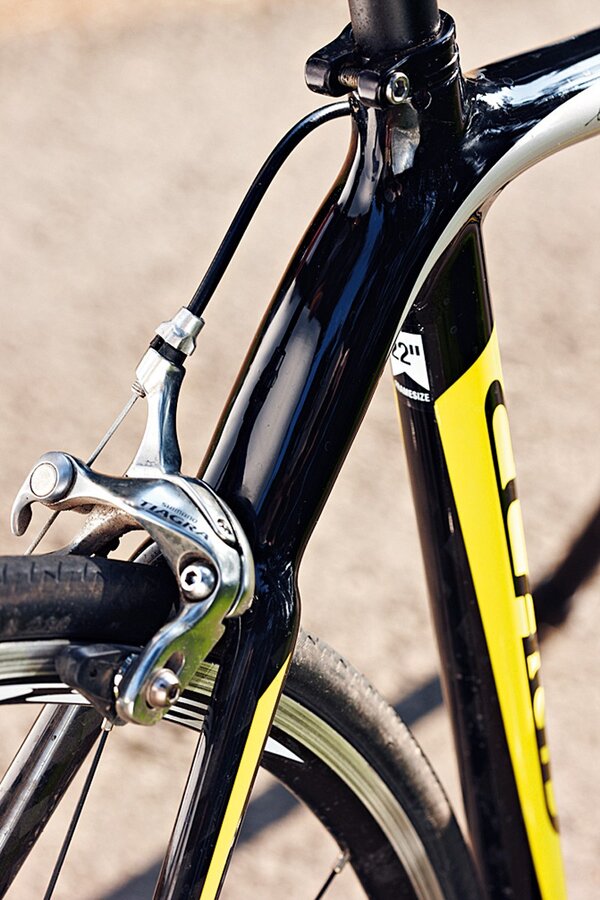 What the heckfire is going on here? Shadows and reflections (the new electronic album from LGF) make it look very odd 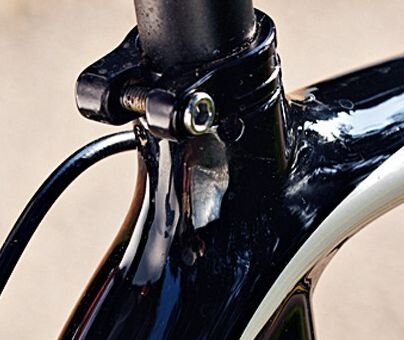 Tiagra is so-so, the rear mechs can be a bit bendy even from new

legrandefromage said:
Tiagra is so-so, the rear mechs can be a bit bendy even from new

Good tyres make a hell of a difference to the ride before going mad on parts
Click to expand...

Tyres are all I’ve ordered so far, a pair of Vittoria Rubino Pro. Cheap and cheerful. Everything else will be from my stock or off of other bikes in the Peachy stable.
More expensive tyres might be purchased if I get converted.
I did take it out for a quick climb this lunchtime and easily improved on my best time, but it does make that weird hollow plastic sound when fast rolling down hill. I’m not sure if I’ll ever get completely used to it. 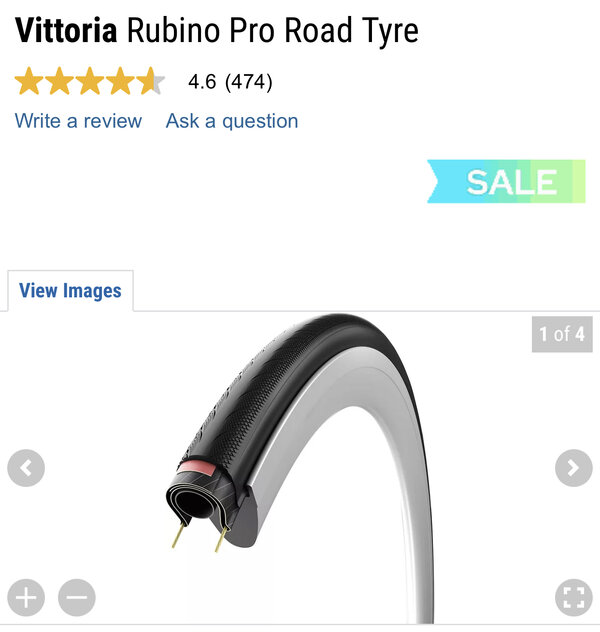 If you find the rubinos don't ride so well, try the vittoria open pave, they are fairly cheap nowadays but ride quite nicely.

Now then, I’ve got my hands on a 2009 Strada, basicly exactly the same frame just different graphics so me & the lad @JimBobBurt are going to clean them up, do a little light paint repair and dress them in lashings of Campagnolo. Which group will depend a lot on how much I get for FSX forks I’m trying to sell

But for now I’ve got plenty to do tidying up the Strada’s forks. 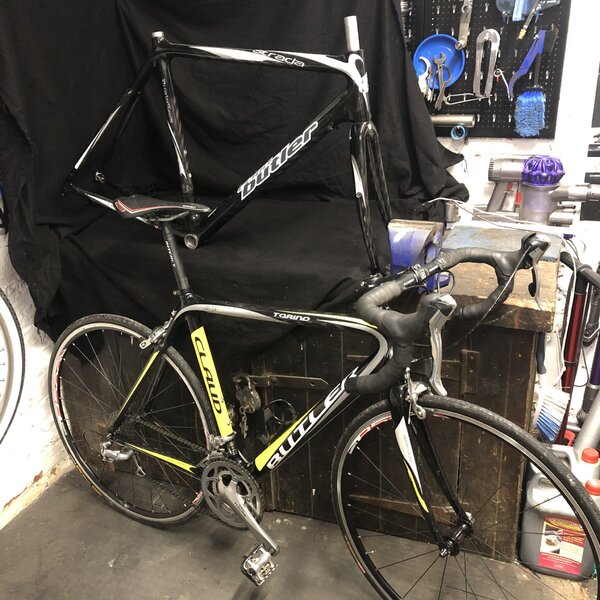 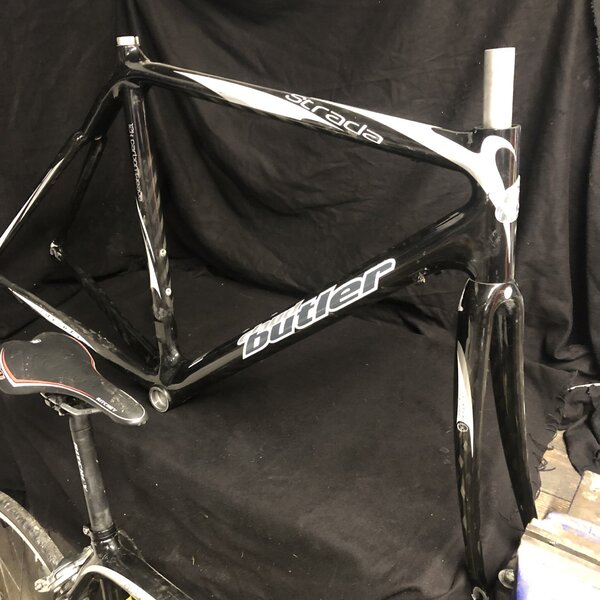 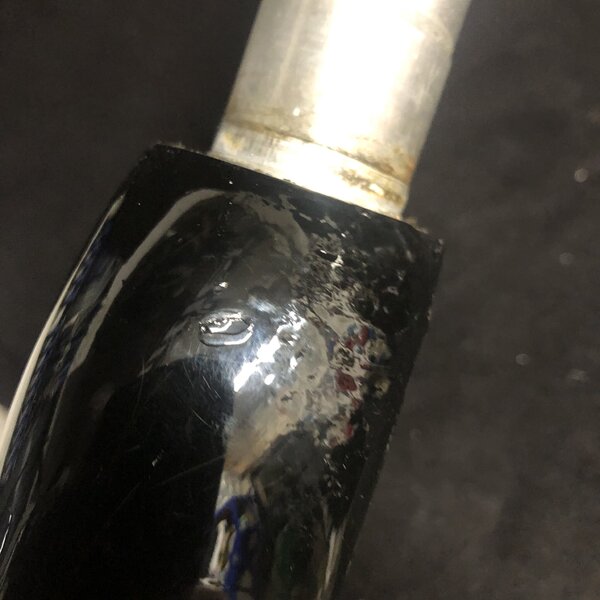 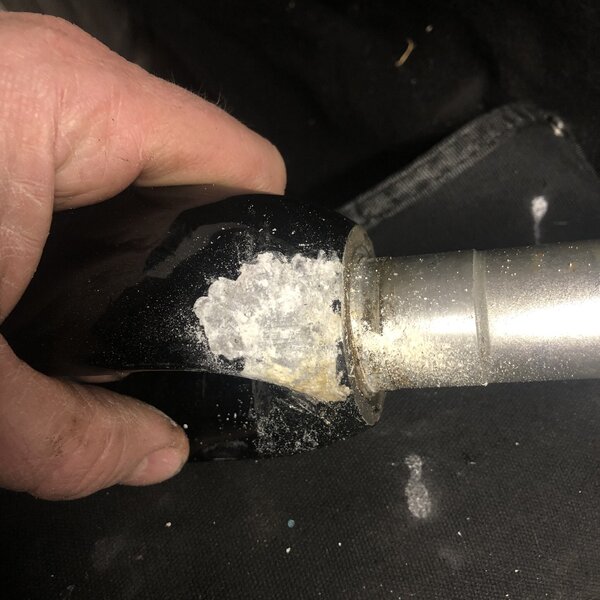 Is the aim to go back to the local group or stick with the flab?

Deep dish carbon rims also make quite a noise should you try them.

JoeH said:
Is the aim to go back to the local group or stick with the flab?

Deep dish carbon rims also make quite a noise should you try them.
Click to expand...

Bit of both, I’m happy on my steel beauties riding around with the FLaB gang and the lad doesn’t mind but it’s an easy social group of various sizes and the age group is predominantly 45+.
He’s almost 15 & wants to ride with a younger/faster group. So I’m doing this to help him till he’s happy going on his own with the “racing club”
J

Rocky Mountain Fan
Was the Strada an open mould frame?
Cannot see they had the means to design a frame from scratch.

How does it ride?

Reminds me of Ribble's early bikes.

Jamesbike said:
Was the Strada an open mould frame?
Cannot see they had the means to design a frame from scratch.

How does it ride?

Reminds me of Ribble's early bikes.
Click to expand...

Not sure how it was moulded but it’s quite tidy, the ride is very comfortable, almost but not quite like riding a steel. Climbing and acceleration was fast but I must admit down hill at speed was a little un-nerving, it felt floaty. But then I’m more used to a heavier steel bike.
You must log in or register to reply here.