Hi Guys,
Finally got around to working on a bike that I initially thought was a Benotto 3000 team bike - except on close inspection its not a Benotto, its a Moser. When I picked it up it was a repainted frame with Benotto decals and a benotto chrome fork and panto stem - when stripping it down further inspection showed that the fork number does not match the frame, so forget that. I also have a mid`80`s Benotto 3000 that used to belong to pro rider Rossolino Manca (who rode for 7-Eleven in 1987), so was able to directly inspect both frames side by side.

I`ve posted about this frame briefly before, but here`s what I know:

1. It was a team frame made by Ugo De Rosa (who personally made the pro team bikes for Benotto and Moser) - had a confirmation email from De Rosa that it was made by Ugo but no further information available.
2. It was repainted - some original metalic blue just about remained on the BB threads.
3. The frame is numbered "4" and "MAZ" - the riders reference for Leonardo Mazzantini.
4. The frame is handmade by De Rosa using his bespoke sand cast lugs - the De Rosa guide shows lugs and BB as being late 1970`s - frame is fitted for recessed allen bolt brake bridge so would make it 1979 onwards.
5. The frame has been fitted with braze on front derallieur hanger - not what you would expect to see - bare metal strip down shows the brazing to be far more clumsy than the rest of brazing (which is a masterclass as you would expect). Safe to assume the braze on derralieur was fitted when repainted later in life.
6. When compared with pics of Mosers `79 Paris Roubais Moser its the same apart from the brake bridge (Francesco Mosers had the earlier) bolt type - of note, the chainstay profiles are the same as the Moser bike (a little diamonding but nothing like the Benotto 3000 diamond profile).
7. Leonardo Mazzantini rode a Blue metalic Ugo De Rosa made Moser for Sanson 1980 - I`m 99% sure its that frame.

Stripped frame next to Benotto 3000: 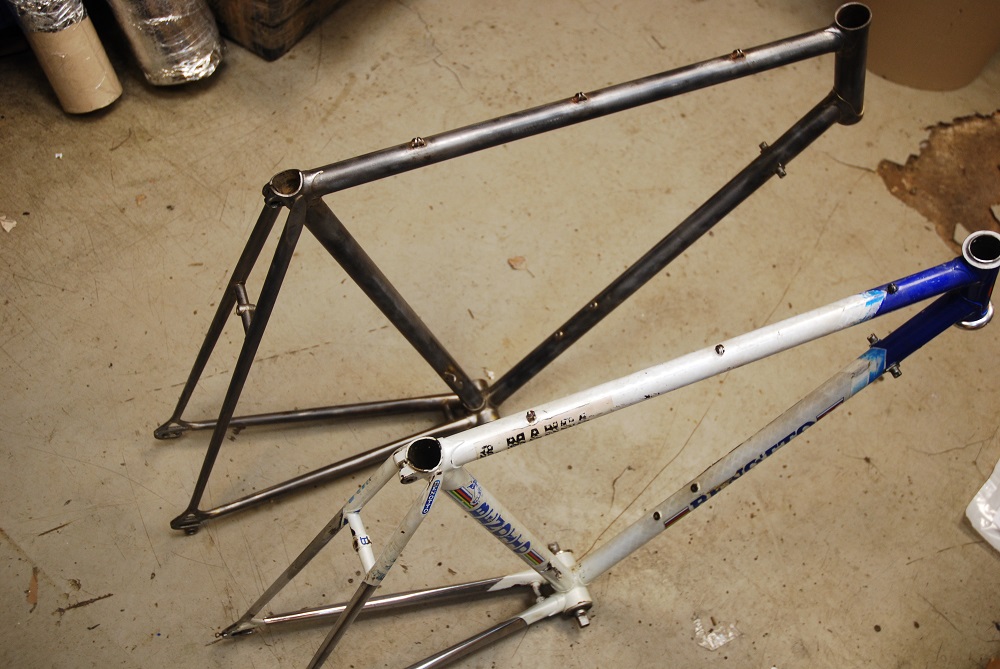 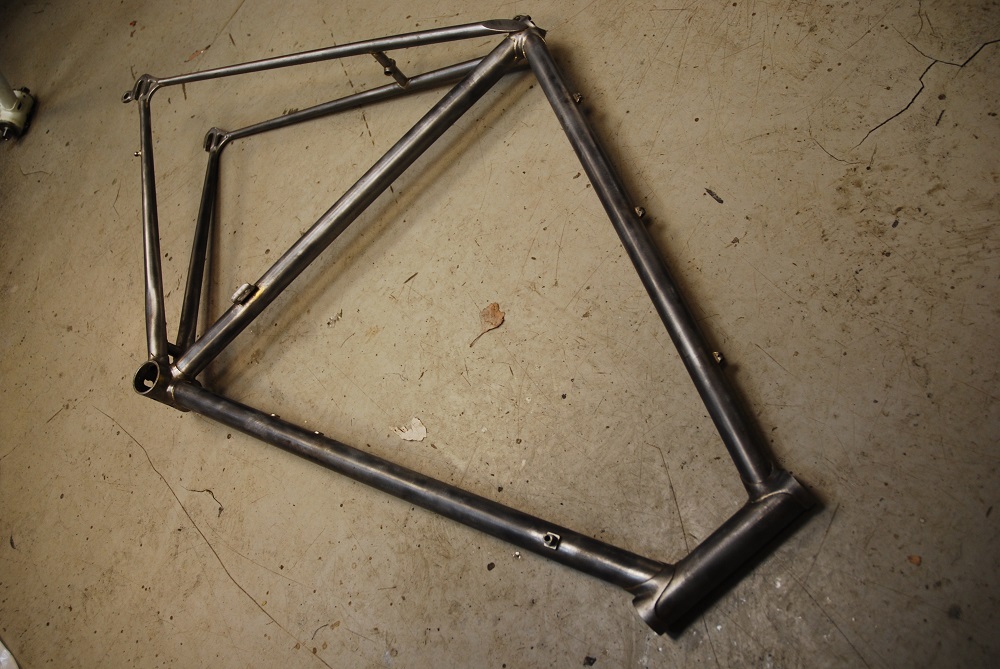 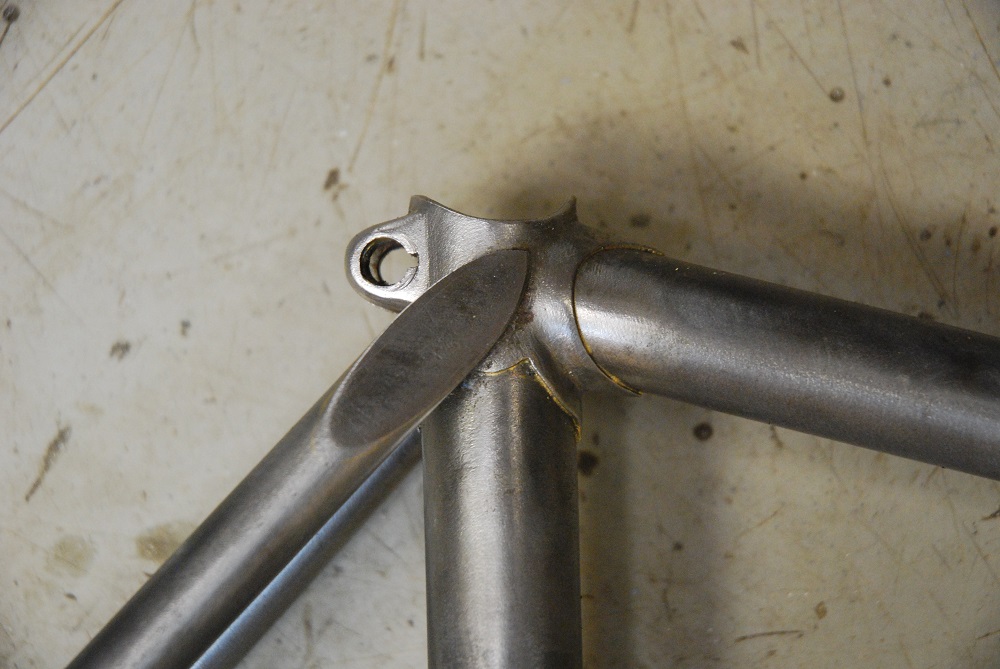 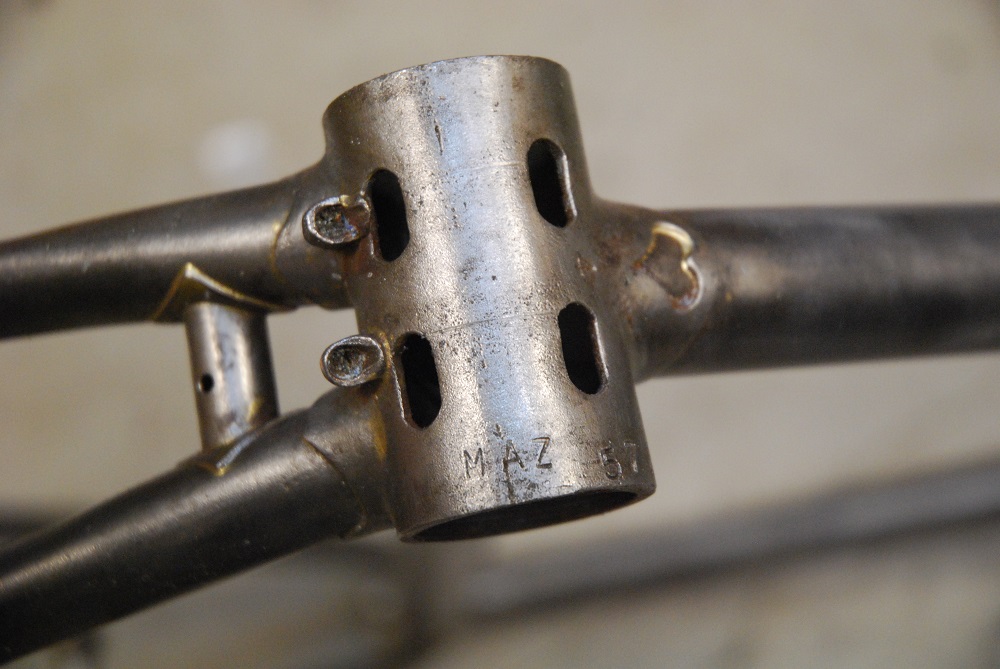 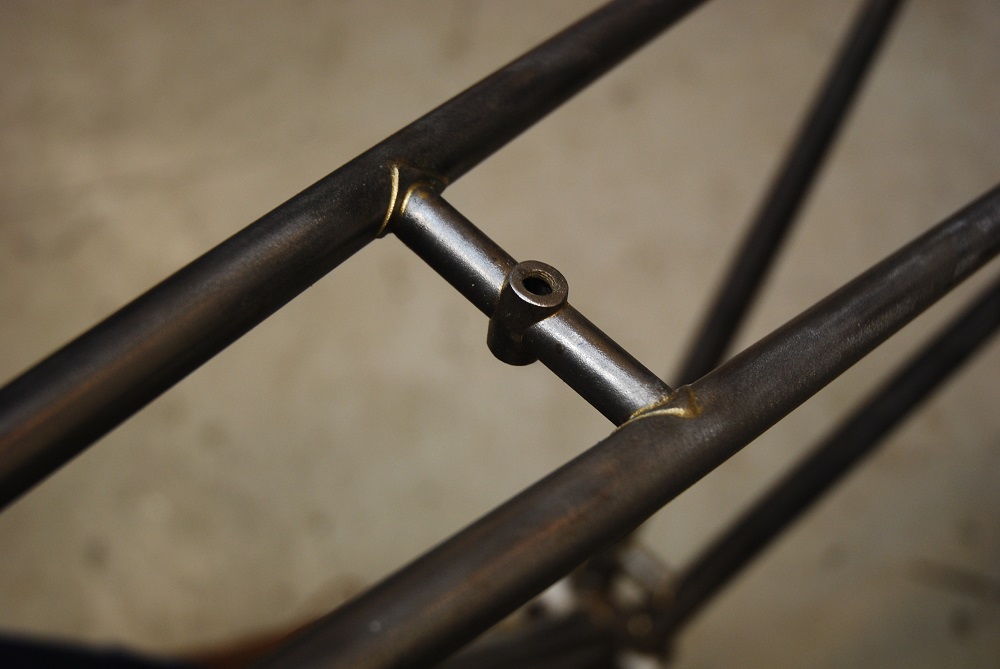 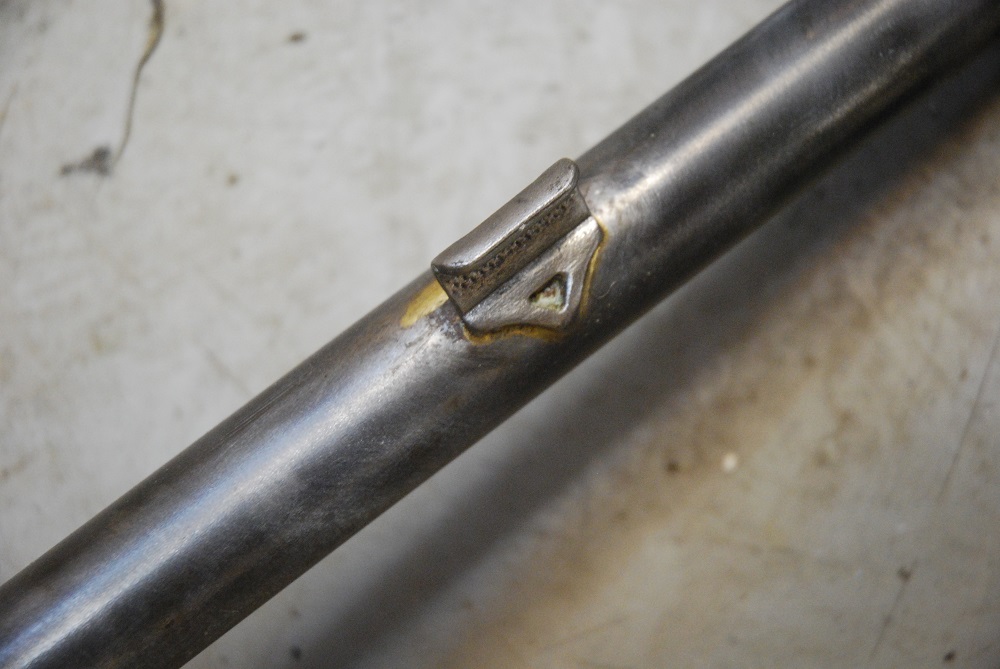 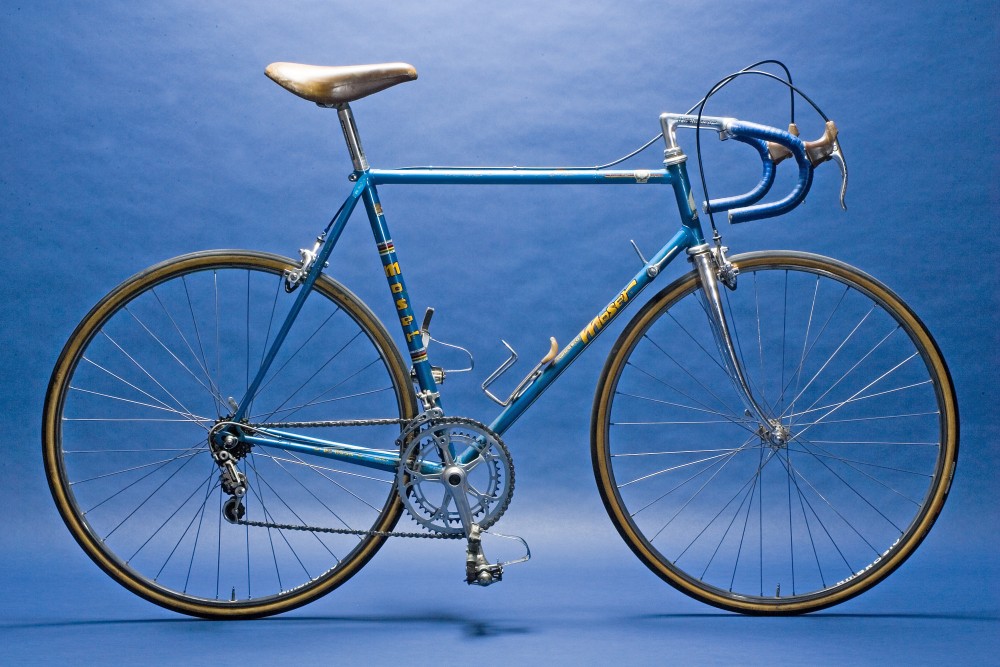 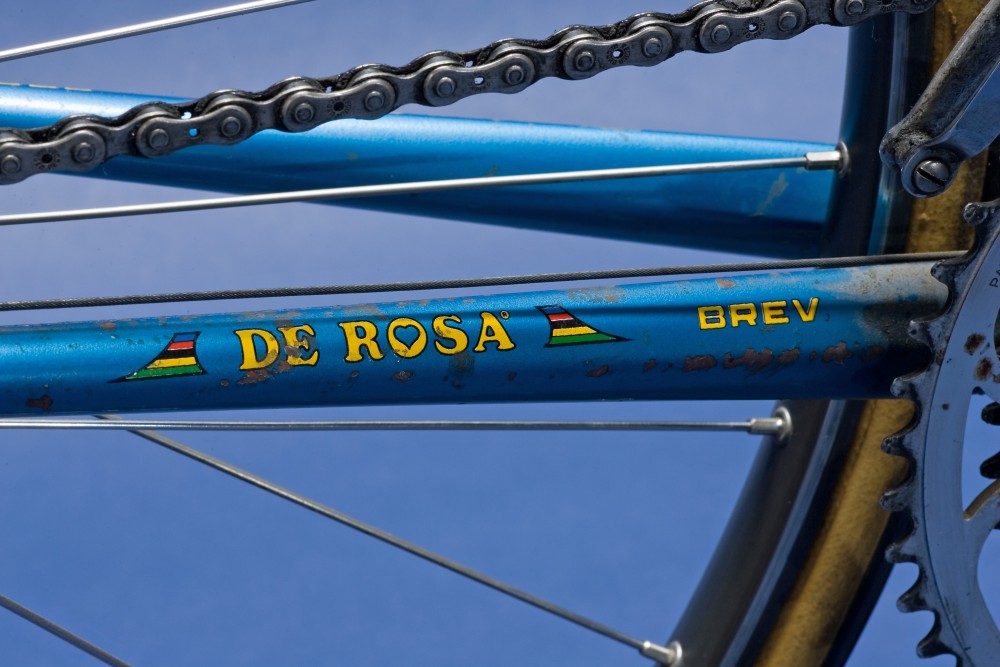 Plan is to fully restore it back to its original colour and set up - full super record spec plus Moser parts.

Was probably going to keep the brazed on front derailieur but have been advised on another forum its best to heat and remove it - also, anyone have any idea what the paint code or nearest car colour is to the Moser blue - maybe Porsche Cayman Blue?

I had a couple of Moser 'team' frames in the mid-late 80s. One was fully chromed and lacquered with a clear blue tint - looked fantastic when the sun caught it, one of my club mates reckoned he could see me at about a mile on sunny days. The lacquer was more brittle than a brittle thing, after a couple of months riding there wasn't a lot left on the bottom of the down tube, only ever saw one other frame with that finish and that one had an engraved head tube. Like a lot of the Moser 'team' frames knocking around at that time both of my frames were what I considered to be seconds having the dropouts filed to allow the wheels to track correctly - one had the right rear filed and the other had one of the front dropouts enlarged. If I'd owned both at the same time I could have swapped the forks over to ease my OCD but I sold one to fund the purchase of the second. Didn't stop Moser being one of my heroes (a close second behind Giovanni Battaglin) - I've still got what used to be an autographed poster framed and hanging in my house, unfortunately years of sunlight have faded the signature to be almost invisible.

Nice bike. Any idea of the frame angles? The head tube angle appears quite steep as the stem is pointing downwards slightly. I've always tended to assume that stems have a 73' angle so that they are level on the 'average' frame.
R

Not sure of the head angle, I`ll have to check - should have mentioned chainstays are set for 6 speed 126mm. Frames being painted as we speak.

Found a pic of the headtube angle - main pic made it look very upright, just a quirk of the pic, this one is clearer: 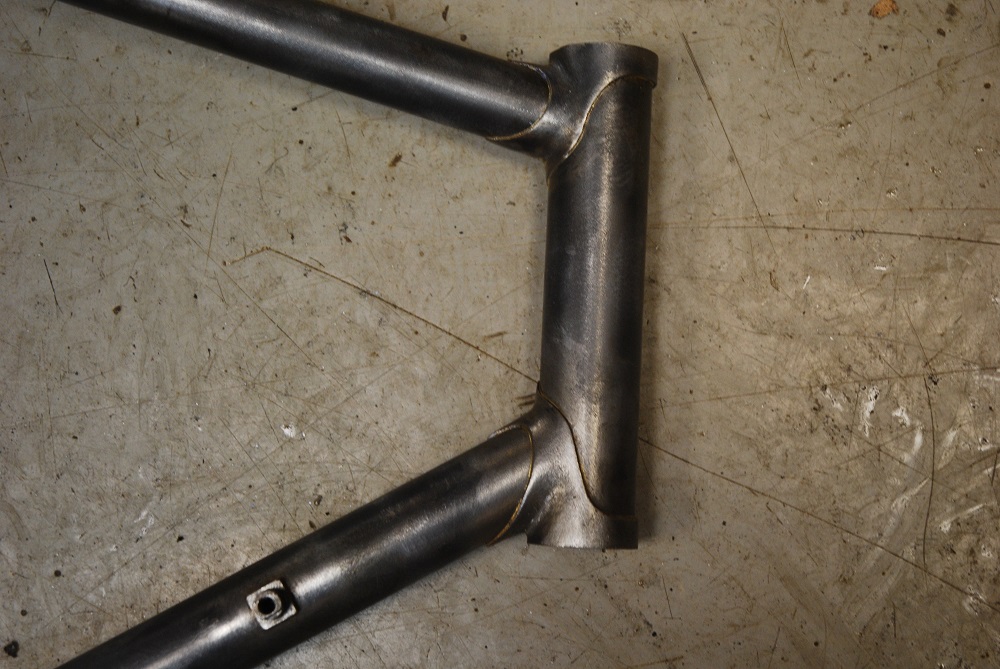 Looking forward to seeing this built up. I've been trying to get hold of an Ugo built frame for a while now, to my eye is that 57/58cm?
R

Yep, really looking forward to seeing how it rides - had the offending front derralieur mount removed and its currently being painted - full build details following soon...

The Moser is now finished, waiting on some better weather to put it through its paces.

Bare metal strip down showed a clumsy braze on front deraileur mount had been added so was carefully removed, then the the whole thing repainted to match the Sanson `79/`80 blue Moser scheme. Frame size is kind of 56 ish medium, but quite streched out with a long reach.


Parts wise, super record throughout coupled with some really neat 126mm Campag Titanium hubs with 26 spoke straight pull flattened spokes with what look like Wolber magnesium rims, can`t be sure but they are really light.


Weight wise, I figured I should take a few details with this being a hand made Ugo frame:


The build was really easy - should point out that rear wheel required no centering at all, just set the adjusters even and spot on first go, everything just went on easy. Too wet and cold here in the UK to ride for a few weeks so it will be a shakedown on the turbo to check the fittings and bed the pads in, only thing I have noted is that the panto 125mm stem is not the stiffest in the world, even when coupled with 38cm bars. 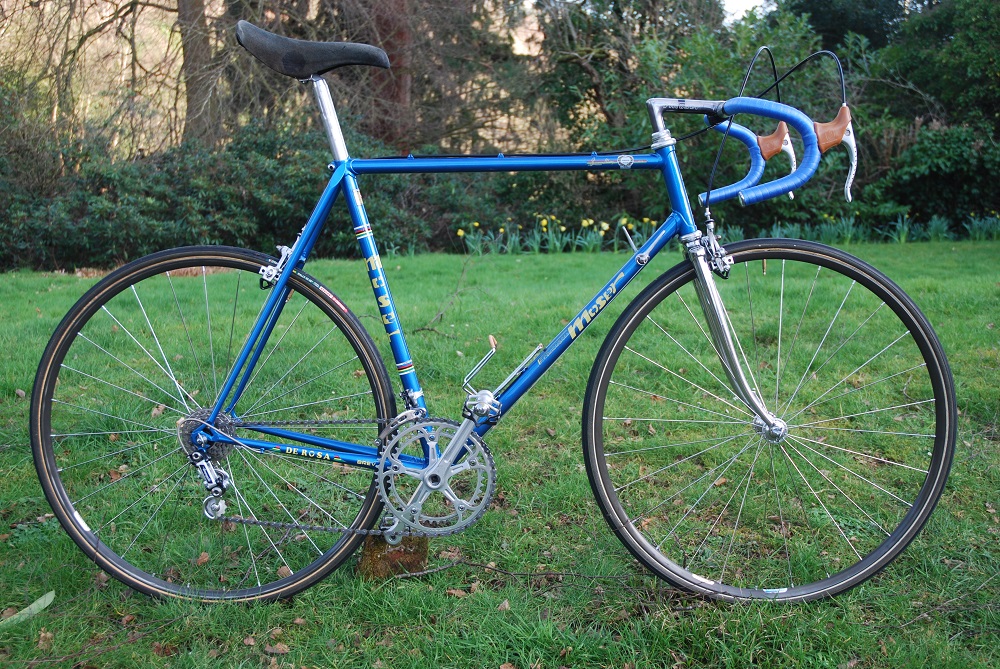 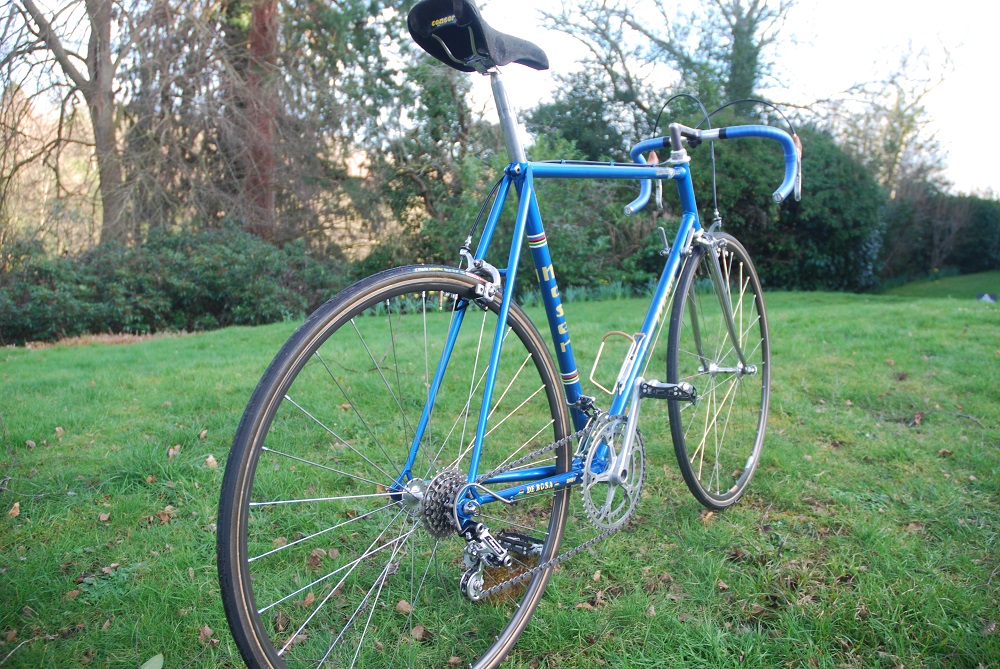 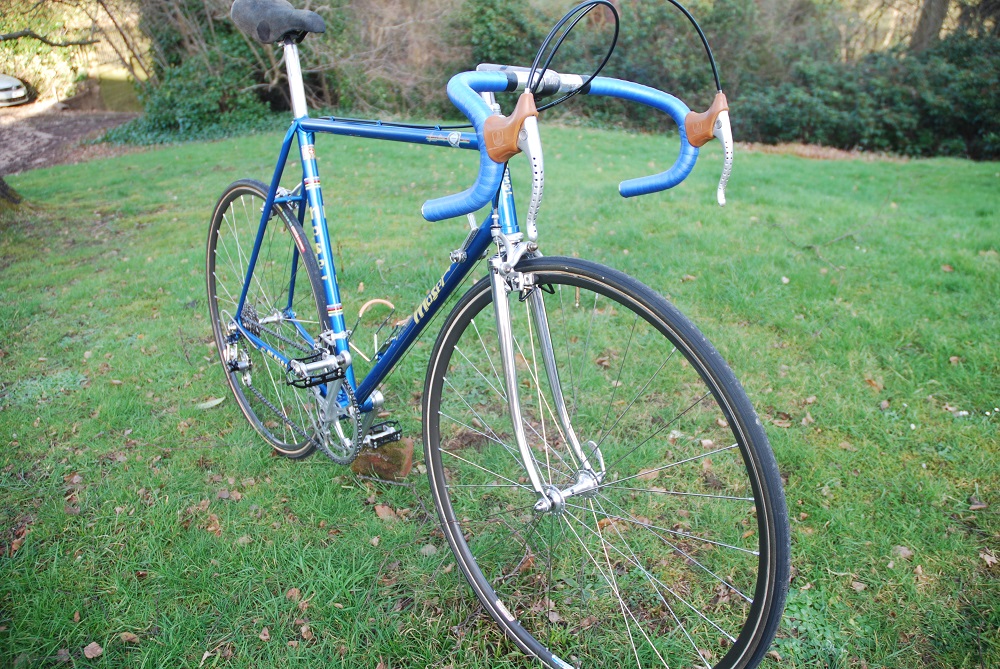 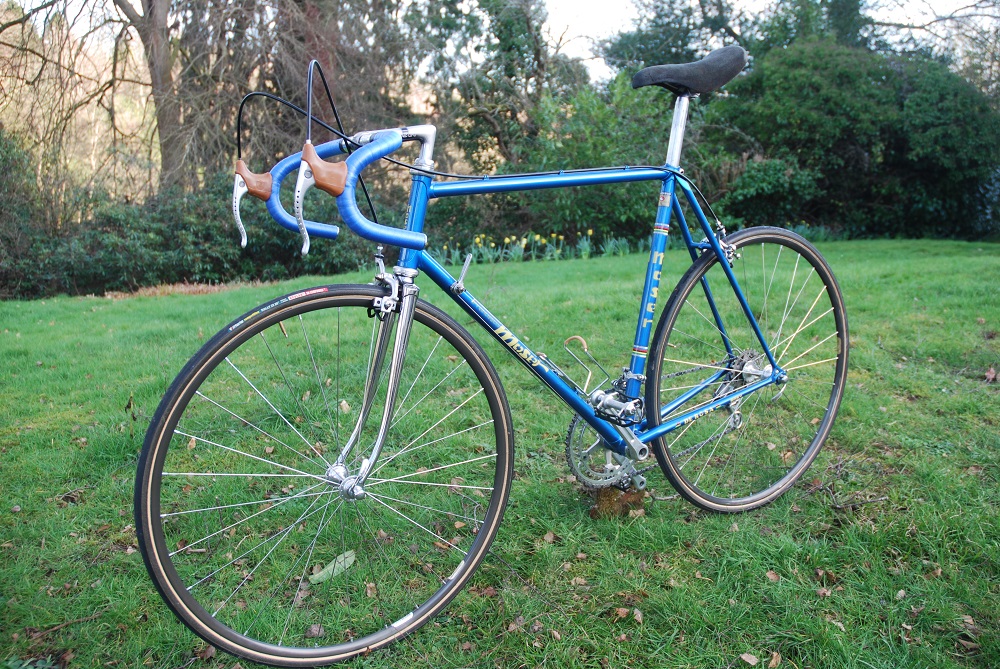 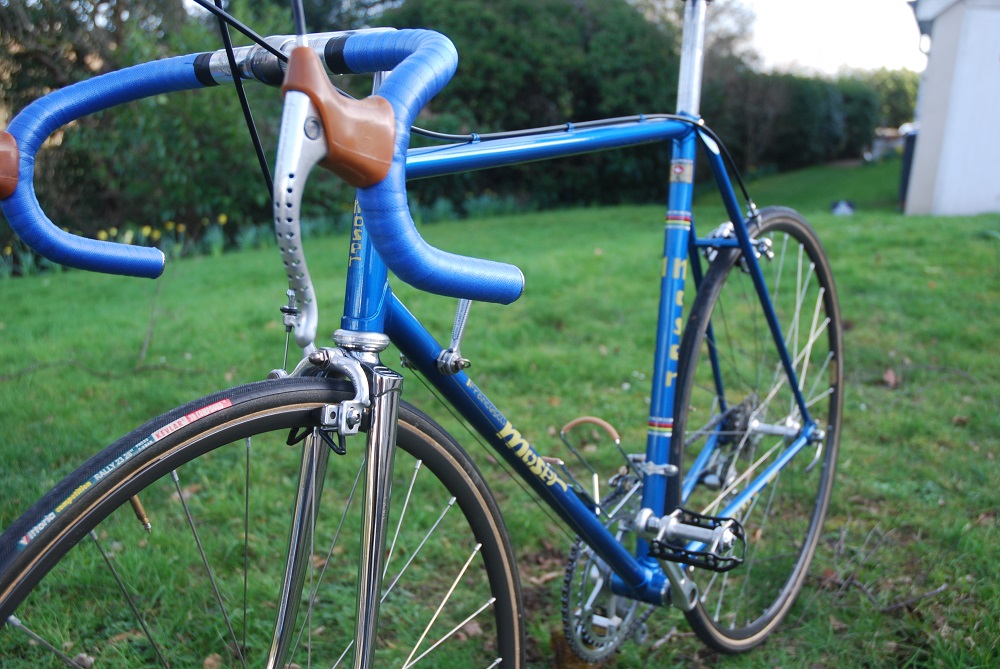 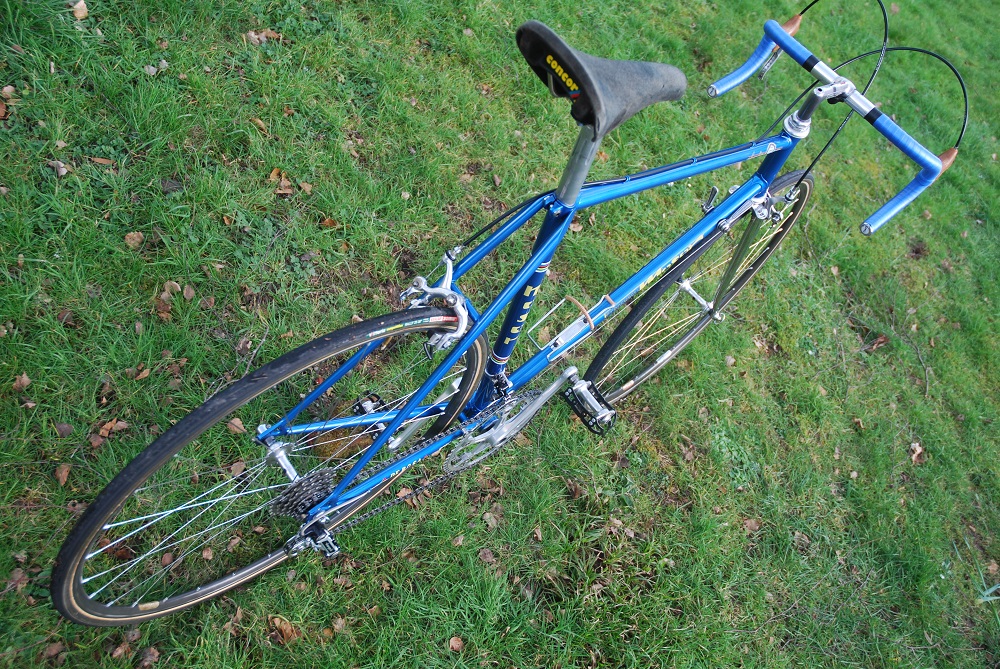 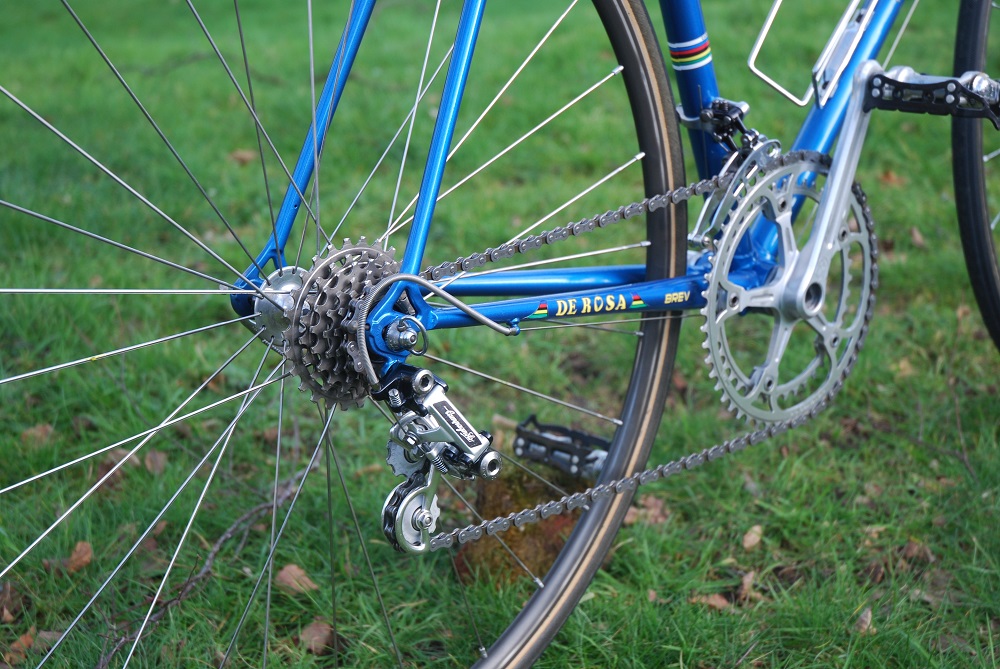 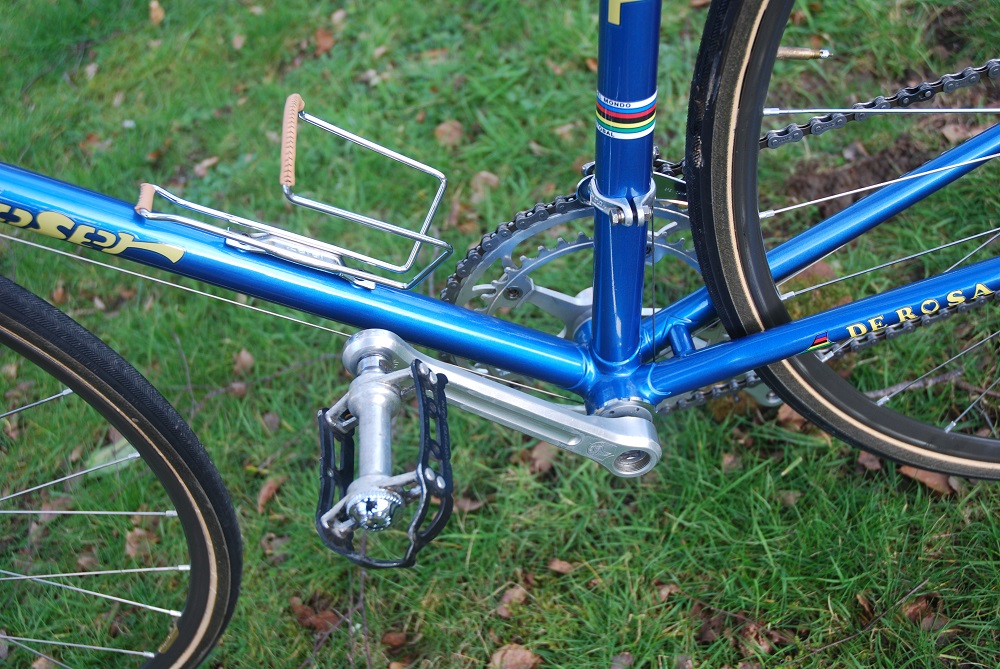 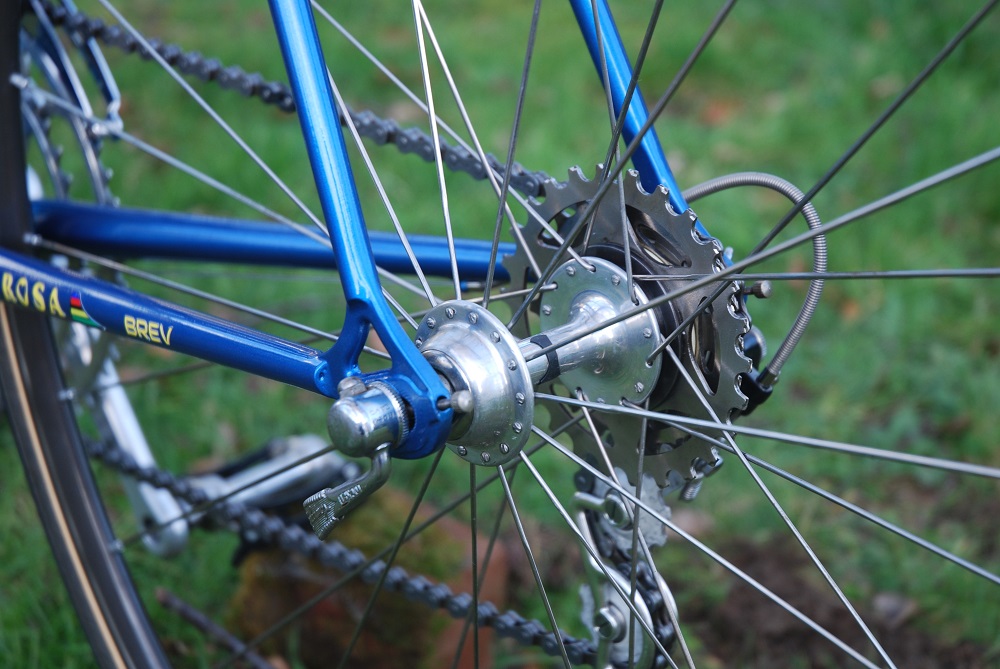 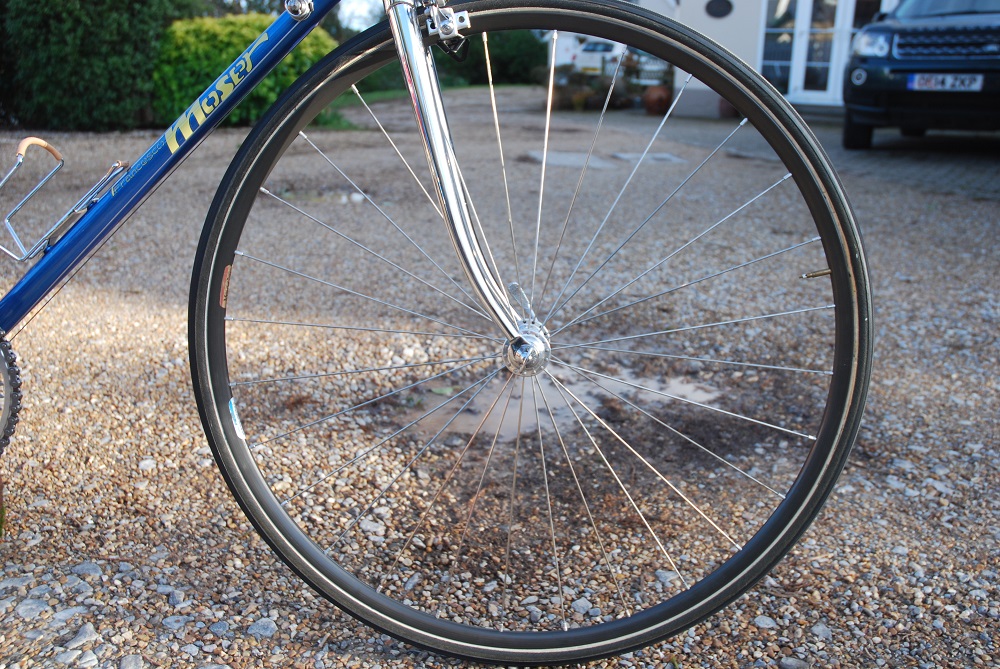 rBoTM Triple Crown
rBotM Winner
That's lovely, I'd be very proud of that.

I've got a lesser Moser of a similar age that I really must do something with.

Nice... but don't forget those crank bolts..
You must log in or register to reply here.