Picked this up at the weekend - carboot sale - Marin Bear Valley - 40 notes - completely original and pretty much unused.

There's a guy who is at the carboot that I go to occasionally who obviously has a deal with the local tip as he always has loads of BSOs in varying states of repair.....of all the times I've seen him I've never spotted anything worth buying - until Sunday.

I haggled him down to £40 - it was clear under the muck and cobwebs that it hadn't had much use. My original intention was to buy it and part it out, keeping some of the original Marin bits for use on some of my projects, but it's so original and in such good nick that I just can't do it. All the Marin lite kit is present....the saddle/seatpost/tyres/bottle cage and even the original pedals and foam grips. It even has the crap plastic spoke protector on the rear wheel - and it isn't cracked!

It was the first proper mountain bike that I owned, and is probably in better nick than the 1 yr old example I bought in '94 from Madgetts in Diss, so it also has huge nostalgic value for me....all the more reason to keep it complete.

So Sunday afternoon was spent in the garden, in the sunshine, stripping the bike down to its component parts and thoroughly cleaning, de-greasing, re-greasing, removing rust from bolt heads/spokes etc.....the only bits to get thrown away were the bar end plugs as they were really scuffed up.

I am more than a little jealous though

plenty of bike for 40 bucks!

if it's your size use it mate, i would.

seatpost. back in 2000 i bought (new) a bv and when put in my mates boot he lowered the seatpost zig-zag style, all the way down! instead of simply removing from frame. the result was same as yours but stood out more,being black. :roll:

if it's your size use it mate, i would.

seatpost. back in 2000 i bought (new) a bv and when put in my mates boot he lowered the seatpost zig-zag style, all the way down! instead of simply removing from frame. the result was same as yours but stood out more,being black. :roll:

Yeah - seat post is a bit annoying - looks like it's only been zig-zagged once, but the scratches are quite deep. Will probably have a go at removing these next.

Just need to attack the rusty spokes on the front wheel, a couple of small tears in the seat and possibly the top tube decal (if I can get a good match for the silver) as there are some scratches along the "Bear Valley" text, and she'll be absolutely mint.

Bike is an 18" so is a little small for me - although I can get away with using a longer seatpost.

Will upload some "after" shots when I've got the last little bits sorted out....

Very tidy '93. Always liked the look of the Exage crank as well

Great find! Looking forward to the tidy up.

Should scrub up a treat...

Will look forward to seeing this all shiny...

Been going through a bit of a life laundry with the bike collection and all the bits that I've accumulated over the years....also been through all my project threads too to see where I'd left them all.

Looks like I'd never actually updated this with an "after" pic..... 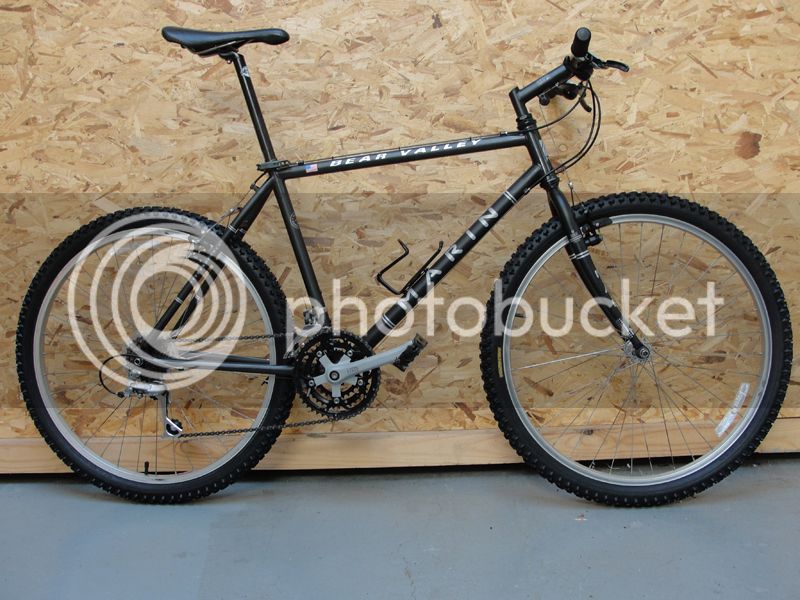 Used this bike a couple of times since the big clean - with a tall seatpost I can just about get away with it, but it has spent a lot of time tucked away in the man-cave.

Toyed with the idea of selling it a few times but can't bear ( ) to part with it - it's the bike that I had as a teenager - in the same size too, and in almost immaculate condition. Should hold onto this one......
You must log in or register to reply here.

GT Karakoram 1998 - I started a build by mistake