However, since my first bike was (a lovely) "New" Elswick Hopper (circa 196, in Metallic Turquiose & Candy-Apple Red....

Bought a lovely (expensive at the time) Claud Butler - a 'Hammer LX' which I still have & love dearly.

Now, fast forward to 2022 & the urge to buy another bike (or two), is fuelled by latterday Health/Fitness/Fuel-Prices.

So, I saw an advert, last weekend, for this "British Eagle Boss Equipe" - Looked nice & was only a laughable £30.00

Back when the advert was posted, it just said "Two Claud Butler Bikes", no mention of it's true-name !!!!

Being utterly clueless about bikes, I had to do night-time detective work, via the internet, dividing & filtering.....

Eventually, perseverance paid-off - Sadly, via a "Stolen Bike" forum/site - Found a "near identical model", so.....

I've joined THIS forum, in the (vain?), hope of maybe finding out some more about it, plus, any advice, etc.

First things first - I'd like to accurately 'date it', if that's remotely possible ?

Everything works just fine on it, it seems well looked-after - Brakes are fine, plenty of 'meat' left, etc.

Besides, it came with another (better) bike - Another Claud Butler - Again, fine condition, just £30.00

In time, I'd really like to give them (both) higher-raised "flat bars", more to suit my sheer size & height.

Am unsure of the 'Headstock' sizes (steering column?), due to my uber-lame knowledge of pushbikes

Would sure LOVE to raise-up the handlebar heights (front stock), as I'm now in my very early sixties

Anyone have ANY remote idea of it's actual age AND what size headstock 'stem raiser' size(s) I might need ?

Primarily, I'd like to know it's "date" of manufacture & maybe even where it was made ?

Photograph No.1 is of the one seen on the 'Stolen Bikes' site, which helped me to I.D the make/type/name

Photograph No.2 , by chance, is one that I saw over on E-Bay UK last weekend - "New Old Stock" (defunct shop)

Photograph No.3 , well, that's the one I've just bought - P.S. ; Photo' is from the Gumtree site, where I saw it from


I did notice that the front-forks on mine ARE DARK BLUE, rather than the other TWO - (which are White only)

Figured that it might help, when trying to accurately date it ?

Appreciate ANY help - Especially regards to the Handlebar 'conversion' I'd like to attempt, at some later-date. 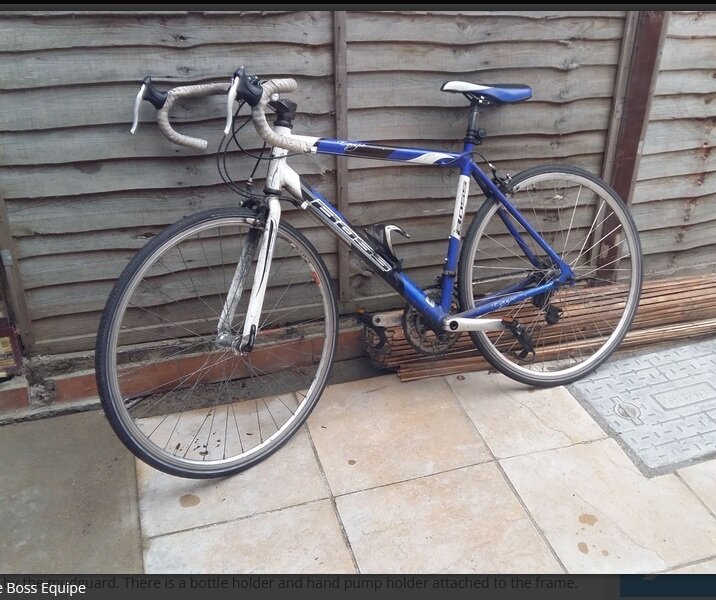 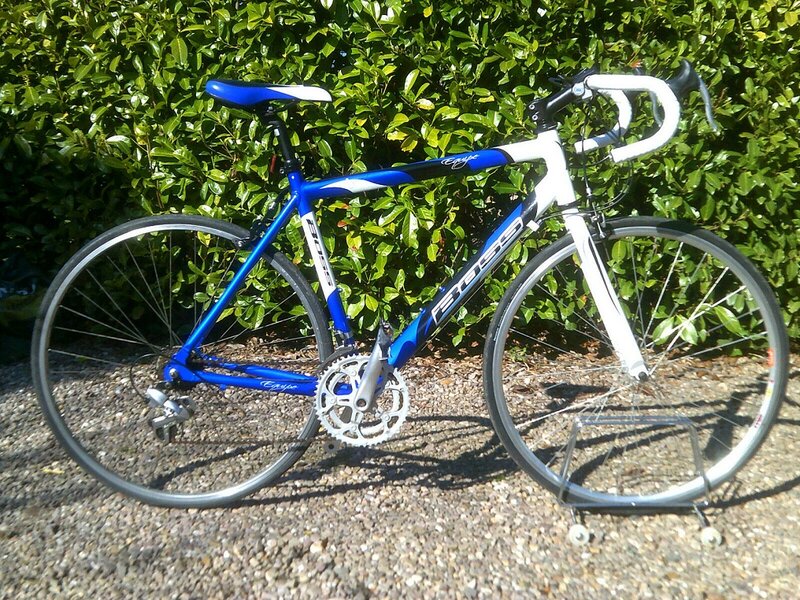 Above is the bike (for sale), seen this week, over on E-Bay U.K - (New/Old Stock from a defunct Bricks n' Mortar shop) 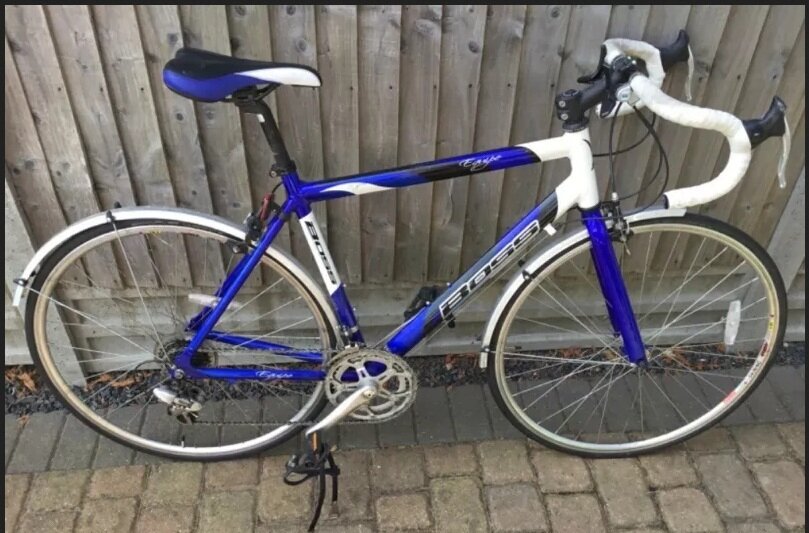 Hello and welcome and all that

legrandefromage said:
Hello and welcome and all that

Many thanks for your swift reply - Fromage - It's much appreciated !

I stand corrected, whatever - This is where my (embarrassing) extreme lack of 'bike knowledge' kicks in.

Show me ANY cycling/pushbike & you might as well be asking me to describe the sand-content composition of Jupiter !


Was rather hoping that I could "have a go" (have a crack), at fitting any handlebar conversion(s) myself.

I'm no mechanic by any stretch (mechanically-challenged here !)

But I did manage (safely & successfully), to "do" the more 'dangerous' (if wrong) handlebar conversion on my "baby-bike" (GS500-E) below 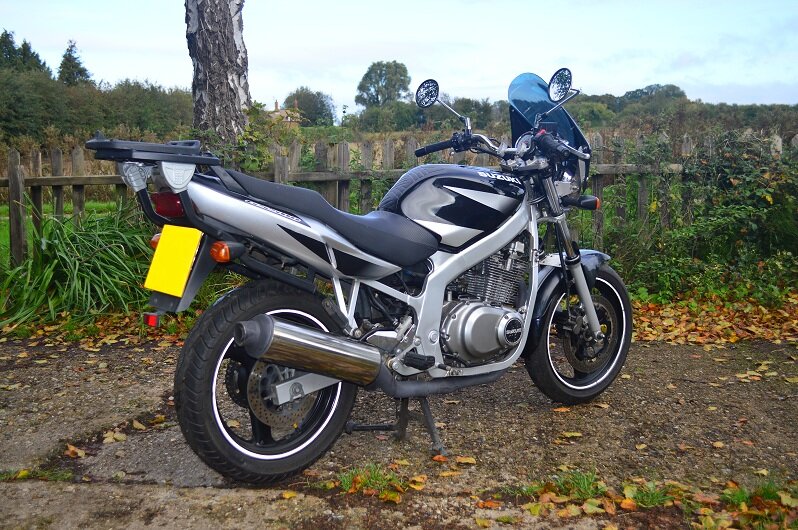 Yup The Big Cheese as usual is quite correct, the British Eagle is certainly post 2000. Any photos of the Claud?
H

Peachy! said:
Yup The Big Cheese as usual is quite correct, British Eagle is certainly post 2000.
Click to expand...

Peachy! said:
Any photos of the Claud?
Click to expand...

Yes mate & please accept my apologies for the delay in replying

As I noted by the 'blurb' under your Avatar, you're clearly a Claud Butler fan, no ?


Due to the (wretched) rough-weather we've had these last few days (Artic), I've been hibernating.

Getting over a nasty cold/flu-virus thing, that was at it's height over the last 2-days....


I mention this, because, until further-notice, the ONLY shot I have, is the one that Katy took !

Katy is the lady from whom I bought these TWO bikes (for just £55.00 the pair)

Obviously it's the 'sale' website (mobile-phone) photograph she took, so it ain't much kop.

But it's certainly good-enough to illustrate what it is & what I've bought, for, say £28.00

Am prob' over-estimating the worth of the Blue/White "Boss Equipe", but hey, whatever....

(I'll take ANY permutation of this, because at that daft price, I wuz happy enough)


The Claud Butler ('Criterion') runs real sweet, no-issues & nothing needs "doing to it"

Overall 'a nice enough bike' that, to be fair, I wuz a li'l bit underwhelmed with, to kick-off with

Two days later (when the weather allowed), I got it out of the garage again & cleaned it up - (mud-off)

That's when I became impressed with the quality of the welding, etc - (M/cyclist, here)

First night I got them home, I went looking-up to SEE "if" I could I.D either bike, via internet.

I found an online review for the 'Claud Butler Criterion', dated circa 2009/2010 - Helping date the bike.

It explained that the bike was just £330 when 'New'

It also explained that THIS model, absolutely WAS "The Runt of the Litter"


Still makes it ELEVEN years newer than my other (beloved) Claud Butler, a "Hammer LX" (MTB), from 1998

I bought the latter brand-new, back in summer 1998, to help me recuperate from a nasty injury (& invasive-surgery)


Interestingly, the latter ("Hammer LX"), has "Handbuilt In England" (Lincs ?), crafted on the side-bar, rather proudly

So, begs the question for an unknowledgeable cycle/nerd "newb" like me....

Where would THIS Claud Butler Criterion ('runt of the litter'), have been built in it's time - China ?

Meantime, here's the (currently) "Lone" photograph of it, until further notice..... 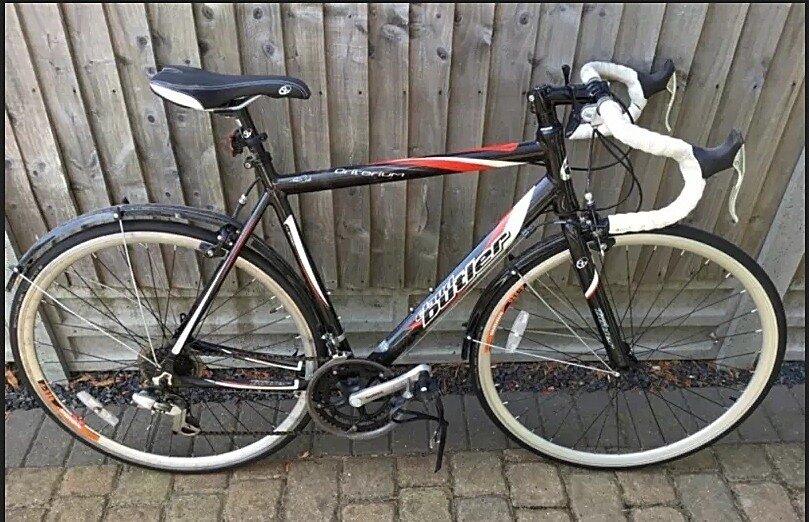 Now then @Hornchurch admin @Jamiedyer will probably move this over to https://www.retrobike.co.uk/forums/2000➡️-road-bikes.93/
Your Claud and also your British Eagle would have both come under the Falcon umbrella of Companies, the British eagle in Peterborough I think and the Claud coming out of Brigg in North Lincolnshire/Humberside.
Brigg Clauds started importing aluminium frames from the far east in 1993 and by 1998 all actual frame production ceased. they were still built up in Brigg up until the big sell-off a few years back (2018 maybe?) Now "Tandem Group" own Dawes, Claud & Eagle.

As for your Hammer LX from 1998, I've never seen or heard of. I've only seen the "Argos" type specials from 2000+, either the "CBR Hammer" or the "CRX Hammer" both of which were very much bellow bottom of the range and certainly wouldn't have been graced with LX so I look forward to seeing yours.
H

Peachy! said:
Now then @Hornchurch admin @Jamiedyer will probably move this over to https://www.retrobike.co.uk/forums/2000

-road-bikes.93/
Your Claud and also your British Eagle would have both come under the Falcon umbrella of Companies, the British eagle in Peterborough I think and the Claud coming out of Brigg in North Lincolnshire/Humberside.
Brigg Clauds started importing aluminium frames from the far east in 1993 and by 1998 all actual frame production ceased. they were still built up in Brigg up until the big sell-off a few years back (2018 maybe?) Now "Tandem Group" own Dawes, Claud & Eagle.
Click to expand...

Sounds terrible, me claiming that I wuz 'clueless' (well, at least, I was, posting my entry here)


I was going intially by what I'd been told by my mate Andy in Suffolk, who'd said.....

"it's certainly nice, if dated in style" (He cont'd by saying...) "I'd say looking at the equipment styles,


Well, me being like a Gazillion times clueless (as to it's age), I posted it there, to hopefully pin-point it more accurately.

Now, with yourself & 'Fromage' nudging me over (gently) & telling me that it's "21st Century" might sound more encouraging

I'd agree with Andy from Suffolk that the paint-scheme DOES look dated, but I'd also say 'not embarrassing'

I went out to the Garage earlier (to get other stuff) & it caught my eye, favourably today.

Perhaps worth saying that, in my opinion, it looks FAR better 'in the flesh', than it ever does in the photo's.


Would still LOVE for someone to 'pin it down to an individual year', "if" remotely possible ?


Many, many thanks indeed Peachy (within your 2nd-Paragraph), for giving me some 'backdrop' on the 'Falcon umbrella'

I've heard the brand-name 'Falcon' over the years, but hitherto, knew nothing really about them.


Glad you mentioned "Brigg" (in Lincolnshire), as I know for cert' that MY Claud Butler "Hammer LX" was made there.


Keeping you on tenterhooks here (laughs) & trust me mate, I "will" be showing you the "Hammer LX" too - (Ahhh, you tease Hawny, you tease !)

Just that this post here (this one), is long-enough already, so I'll have the pix you need (& some info'), by this weekend

Cheers lads & I look forward to posting it here, around the weekend - "Hawny".
.

Just checked through my catalogues. The Claud Criterium is from 2008
H

Peachy! said:
Just checked through my catalogues. The Claud Criterium is from 2008
Click to expand...

Yeah, I'd already figured that the Claud Butler ('Criterium'), would be FAR easier to date, rather than the 'Boss Equipe'

The 'Criterium' surprisingly still had a road-test article on it & it's still viewable today....

Whilst I find catalogues interesting, they're not always an indicator as to what's available in those shops at any given time.

However, my 1978 model had (clearly) languished "in the showroom" - Am guessing that the dealer WAS charging "waaay too much" (?)

Anyways, back then, U.K registrations ran from 1st August to 31st July the following year.


Now, catalogues aside, another question

On my Claud Butler "Hammer LX" that I've yet to show you, it has THIS badge, panel & claim.

Now I don't know as to 'why' they're shouting the odds about it - (perhaps you can explain), but it says this.....


Begs the question (to the clueless amongst us - namely, ME !) = W.T.F does all that nonsense mean ?

What segregates it from being ANY different between a cheap supermarket cycle, or a Halford's pushbike ?

Why were the manufacturers 'shouting the odds' about it ? - Here's a photo' of the badge on the downtube (taken in 2013)

It actually WAS taken 'the correct way up'. But, am guessing that despite I've lowered it to 1018pixels, site wants it seen sideways ! 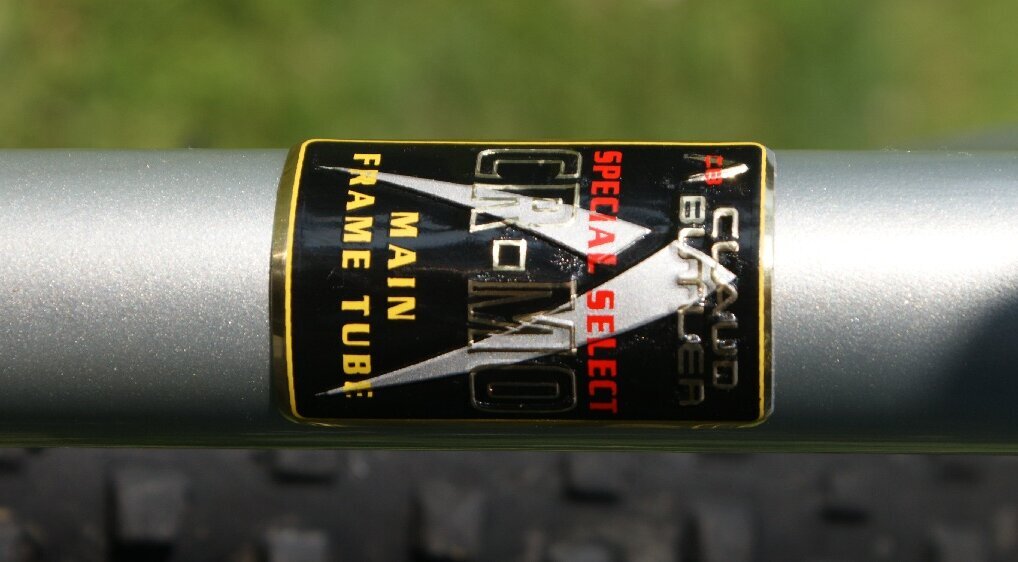 legrandefromage said:
Hello and welcome and all that

I took your sage advice & 'genned-up' on what to buy & as to what I needed, headstock-wise.

After some deliberation, I chose to purchase a GOOD strong alloy stem-riser, that went up to 70-degrees - (raise)

I kept the original handlebar-layout as such (for now), rather than go 'full-on' flat-bars straightaway

Have always been of the 'If it ain't broke, don't fix it' mentality - plus found myself liking the 'raised drop-bars' more than I realised

Much more tolerable & FAR less stress on my 6ft-2in (overweight) frame AND of course, my wrists !!!!!

Prices of cycling components seem to shooting-up, day by day.

Luckily, Flea-bay has a whole bunch-ton (note the Americanism !), of sellers competing with & against one-another....

Am surprised as to just how well-made some of these components really are !

The ones I bought came with additional Allan-keys AND spacers - (not that I needed them, anyways)

Honestly - It really was a 'pi$$-easy' fix & I done both bikes in a relaxed-spell, in just one hour alone, being careful too.

Change of both pedals AND bar-angles totally transformed BOTH bikes & made them (both), utterly more useable.

I dread to think what ANY bike-shop would've charged, for both components AND fitment-charges ?

More satisfaction, doing it myself anyways & helps me get to know the bike better - So far, no cable-changes, either.

I shall stick some additional photo's in, from time to time, documenting the changes AND change of area.

Thanks for your advice anyhow, what with me being 'a newb' to any form of cycling-conversions AND previously, unknowledgable too.

.
You must log in or register to reply here.