Any American Eagle info out there?

Ive got what looks like an early 90s American Eagle(by Concorde)Big Bear.Its seems to be a half decent frame with Ritchey stamped dropouts with no rack eyelets,although there is no designation sticker I think its a Tange butted frame.Im taking off all the modern cack and older mix and going for an M732 build.Info on these earlier American Eagles is practically non existent(even the company know nothing of the older bikes) I even resorted to emailing Brentjens if he had any info on them and he only knew of his mid 90s alloy team bike.Anyone here ever owned one or have catalogue pics etc?

Hi, you're fully right, American Eagle isn't well documented at all. I do have only limited information, but I'm happy to help.

First of all, are you sure that your Bike is an early 90s build?
American Eagle was introduced by the Dutch company Veltec-Rentmeeste in 1993.
The road cycling brand Concorde was used as co-brand to didn't start as unknown.

A bit of history is on their current webpage

americaneagle.online
in the "our history" "read more" section, but be carefully it's a lot of marketing blahblah, California, blahblah...

The first American Eagle Bikes, at least the ones introduced in Germany, had been 1994, at this time all models had been called "Stratos" just with a different number at the end, from 403 to 703. 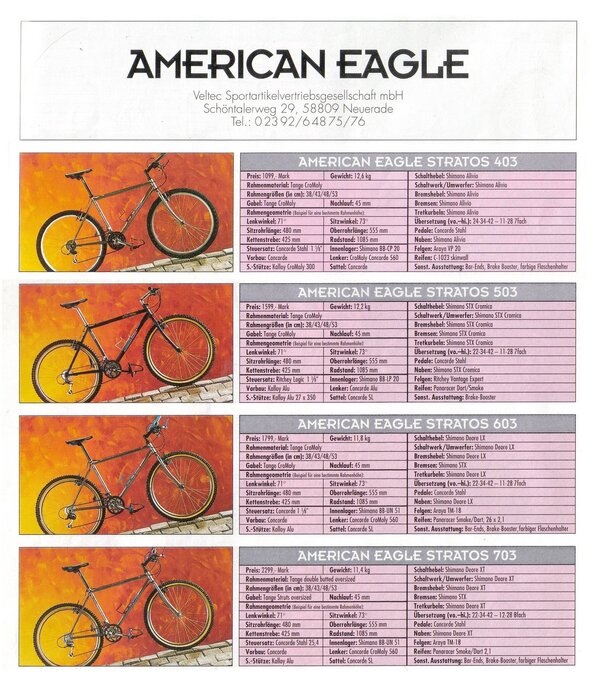 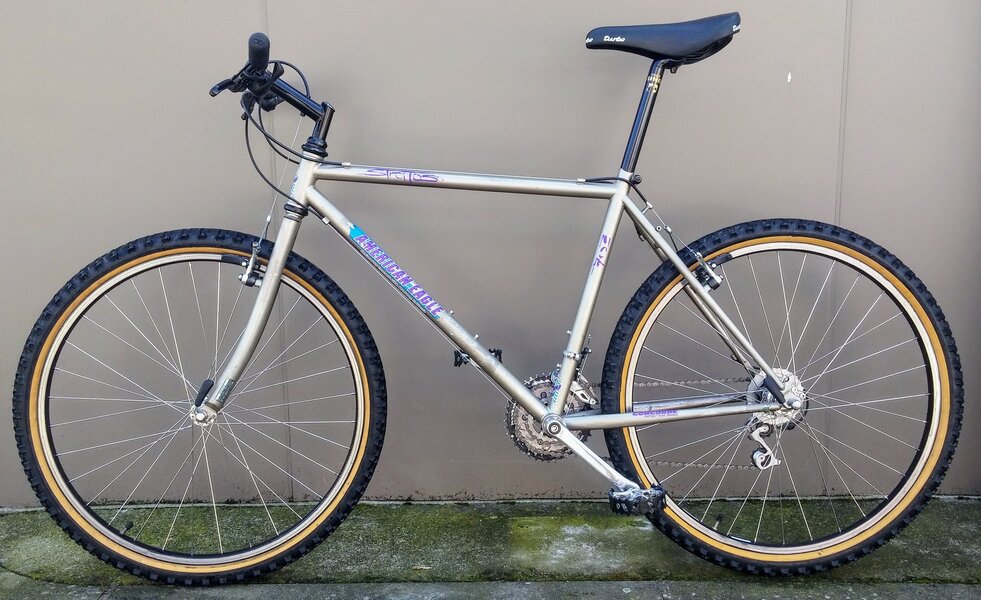 Later line ups had names like Durango, Vail or Big Bear had been introduced and the race team has been sponsored.

Here's an Ad from 1995 with model portfolio 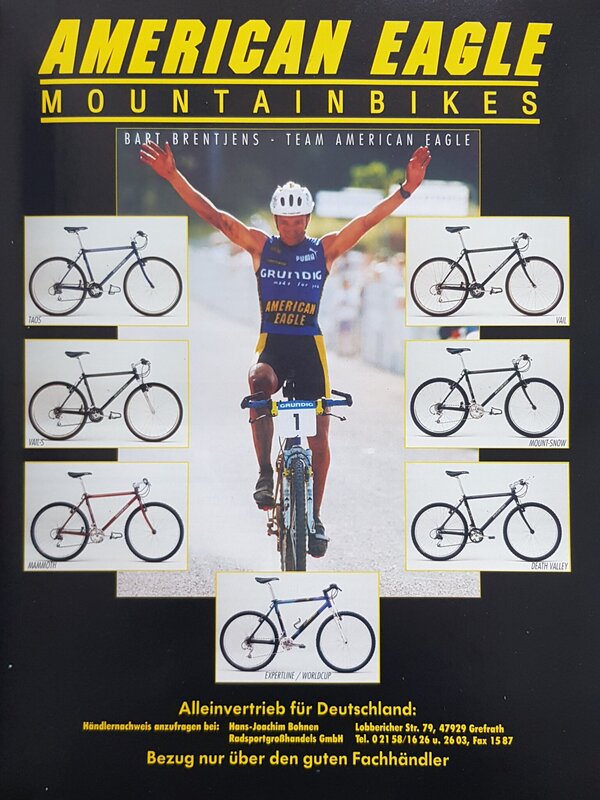 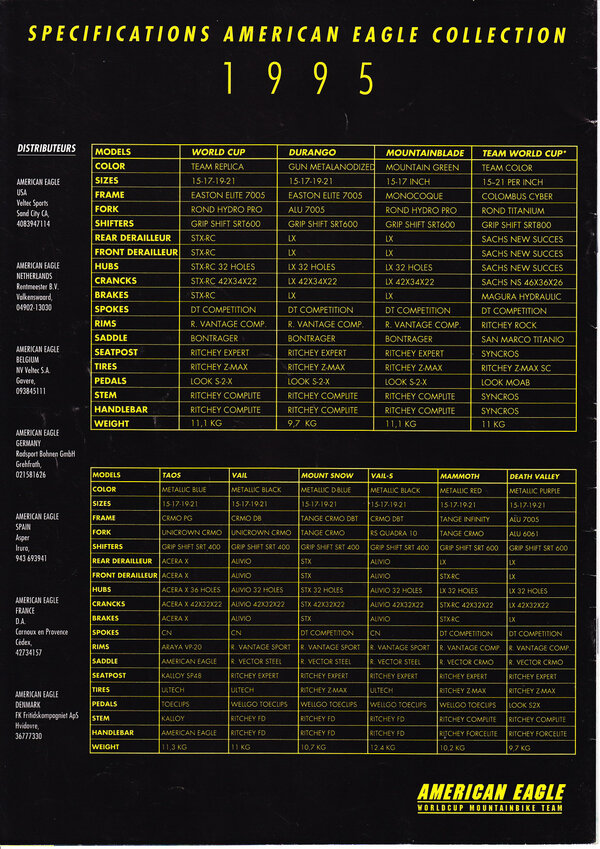 and picture from the race team 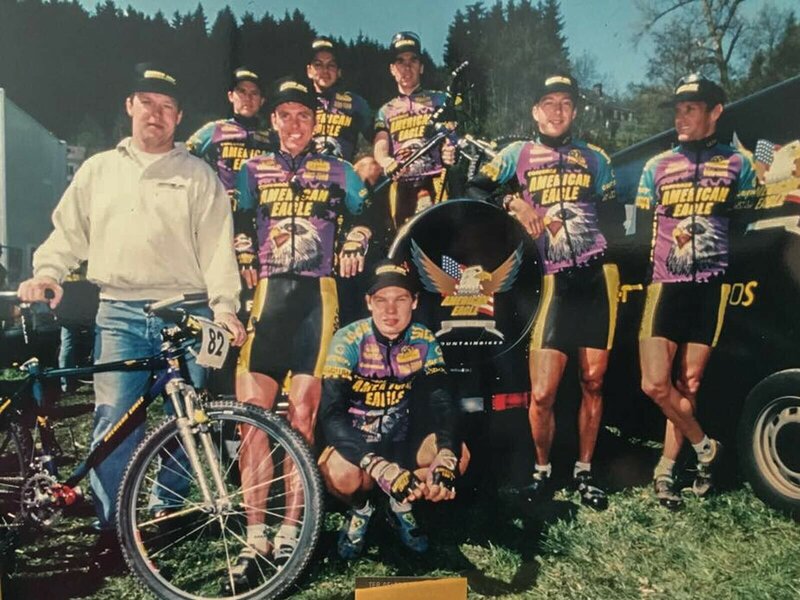 From what i do know, they didn't miss any opportunity to leave an "american" bike style impression, but this was all just fake to polish the image.
The company was led out of the Netherlands and Bikes had been produced in Taiwan.
Bart Brentjens Atlanta winning bike 1996 was BTW build by Markus Storck. 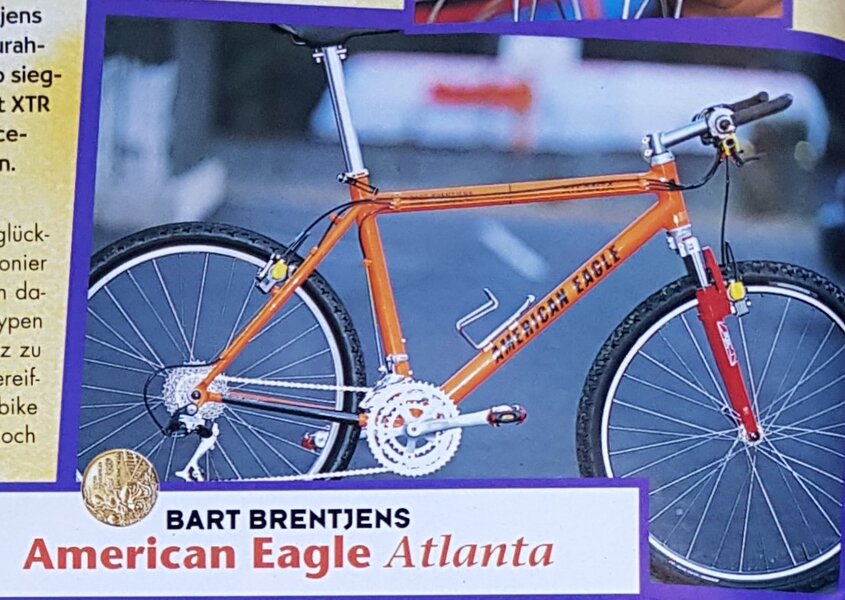 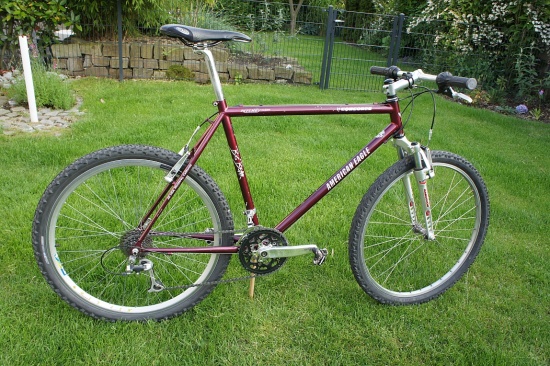 fotos.rennrad-news.de
That's a late 1995 one

I do have a Concorde. I think they introduced the American Eagle brand because Concorde was a brand with good rocognition among road cyclists, but not so much with mountainbikers. Both Concorde and American Eagle were carried by Veltec-Rentmeester from the Netherlands. The Concorde road frames were sourced from Belgium and Italy. Mountainbikes most likely far east. Maybe very early Concorde MTB-frames are an exception.

Agree, especially as majority of bikes till roughly 1997 had been with Tange CroMo Frame in good quality and nice Shimano and Ritchey parts.
Also paint jobs had been nice and clean but also durable.
Last edited: Sep 21, 2021
6

joglo said:
is your Big Bear looking like this one?

66 triumph daytona said:
Yes thats my one.
Click to expand...

just updated the picture in post #5, to give you also some more details about used components.

I personally would build it roughly time correct, with mainly polished / silver parts, but don't mind off original spec.

Looking forward to see pictures somewhere in the forum from your bike.
You must log in or register to reply here.