5 years work written up in 5 nights, so you can binge watch it Netflix style:

The time has finally come to attempt to put this build thread up before they are 2 a penny ! I’ve been putting it off for at least 5 years, as it still isn’t quite perfect. But I have come to realise they are never quite done and the suspense of wondering what might happen next in others build threads is part of the entertainment. In my defence, it is now 2 bikes in 1 !!

The backstory starts with my childhood bedroom in the depths of sleepy West Wales, circa the mid 1990s, when I redecorated the room ‘tropical lime‘ as a teenager and decided to cover the ceiling with MTB posters ‘inherited’ from my older brothers copies of MBUK & MTB-Pro. (He’d gone to uni) The most indelible pictures from which for me, were often the JMC ones, be that the cover shots, coaster wheelies or just the general look. Then one day, MBUK did a free copy of DIRT which put him at icon status, the rest is history as you all well know.

Having then slowly learnt all the JMC/Dirt tricks across my adolescence and used it to whooo all the village girls, the final thing, all be it 25 years late, was to acquire the blood red bike ! (Doing it on a purple Saracen wasn’t quite the same, even if it did have smoke & darts, a club roost riser on it, whilst I wore a chrome Troy Lee peak !)

The good news is, I’ve kept a dedicated photo album on the phone of almost every build step/purchase/cleanup, which now has 387 photos, 1 video and an excel spreadsheet of the parts, costs and place of origin. So you can now sit back and binge watch in true Netflix style, a 5 year build thread, in 5 nights or so, if you so wish…

Ps- I reserve the right to retro edit lots of words as I fancy and use some artistic license when retelling the story. Not to the extent of Amber Heard, but more like Downton Abbey !!!

@martyn855 for the original replica build spec and the sale I missed out on circa Aug 2016. (Yes I’ve been pondering it for that long)
@Spudly for buying that replica bike and continuing to make it even more accurate with supporting info and great pics.
@Neil. For buying the actual original JMC bike in auction for a high enough price (£5,314) to put all the rest of us off and thus think we can build our own for a fraction of the price, or not as the case may be !
@pw_pw_la for encouraging interesting build threads generally and a can do attitude, all be that fuelled by the California sunshine !
Last edited: Jul 15, 2022

The trailer for tonights episode: The tropical lime teenage room with gallery ceiling circa 1994/95 ish 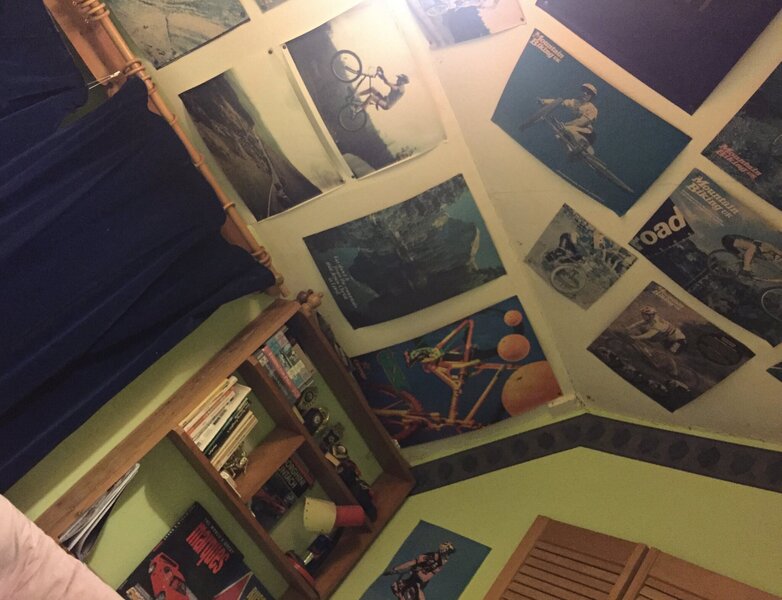 I’m so glad this is finally here mate.

Can’t wait to see it…

Looking forward to this
E

I posted here to get update

I want to try tell the build, errors and all within reason and illustrate as best I can, the various incarnations it went through till I ended up with what I really wanted. That is to say, time in life is generally short and to have the time or money needed is equally shorter, so I’m a fan of also acquiring a ‘that’ll do for now part’ from eBay so you can ride the thing, untill a better or more accurate one eventually turns up.

So don’t laugh too hard at some of the early set ups. But I think they are important to show how hard it can be sometimes, to eventually get to what you want. The build would be either of the 2 JMC bikes on my teenage bedroom wall, depending on which key parts popped up first…

The full face Cap D’Ail race bike below, I originally thought was a hard tail, but closer and obvious inspection tells you it was one of the earlier 1994 FSR, pre the dirt movie, taken in late May of 1994 during his first year sponsored by them.

And this was Martyn’s original for sale thread spec list that helped make me feel it was possible in the first instance: 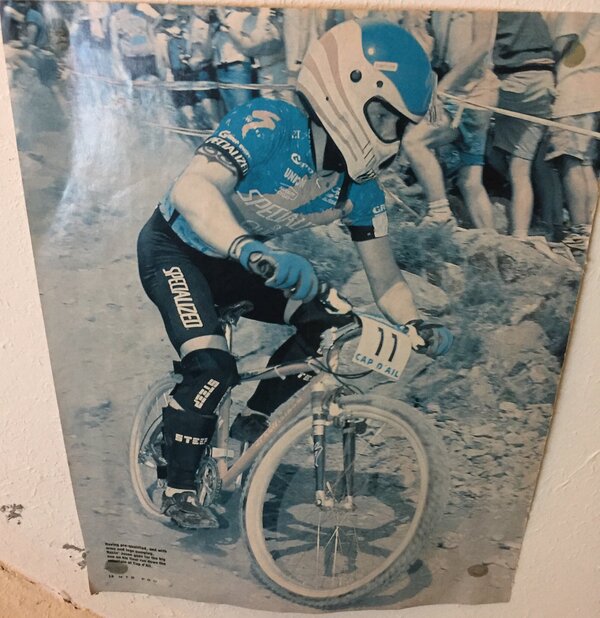 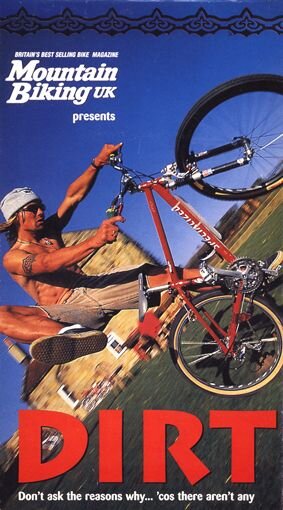 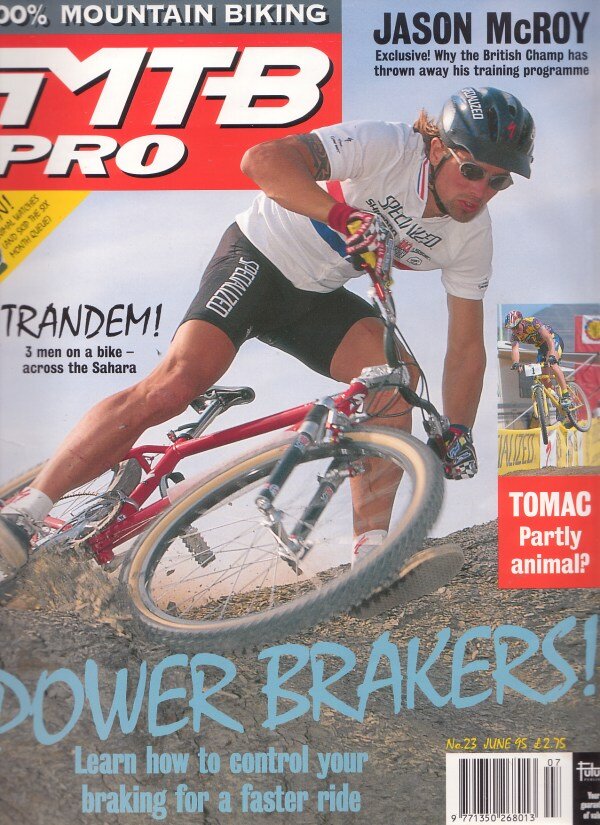 Whilst I’d been browsing for years, the eBay search really started in ernest circa Feb 2018 and the first parts started to come in 4 months later, most of which were all ‘lookalikes’ but that was all that was popping up at non-crazy prices to me at the time. Although some how I justified the essential green shark tooth grip rubber at NOS money, £20 !

Generaly what I’m trying to illustrate is things were a right mess and slightly embarrassing, but it seemed like that or nothing at the time. The plain Pace RC36 forks got stickered up as faux FSX and I had a little more than a Red frame with a black carbon fork, but it felt like the start of something that seemed worth pursuing.

An original FSX fork now seemed essential, but it took 8 months for one to pop up and it was attached to a red M2XX, all at a very reasonable price due to collection only from Essex. I bought the whole bike for around £275, swapped over the Azonic parts and triple traps that I had since picked up and felt like I was starting to make less embarrassing progress. The M2XX was a 1997 frame, only a couple of years out I figured !!

I felt really proud having the real FSX fork and it set me off on a better path of trying to get the real parts from now on. Or at least the real parts as best I knew them at the time from zooming in on photos and so on. 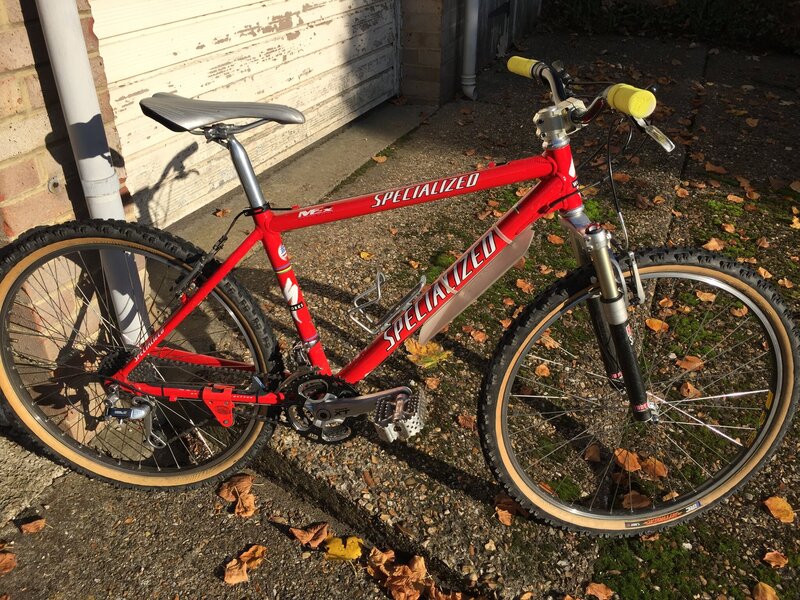 No sooner than the dust had settled on the above and 1 month later, the correct ‘1995 TEAM M2 S-works frame‘ came up for sale in Inverness, Scotland. Complete with its original seat post, titanium seat collar and titanium stem, 1 original owner from new. I hadn’t seen one at all prior and I’ve only seen 2 in the 5 years since, both of which were the same 17inch size or bigger than this one, so this was a key part in year 1. With a ‘make offer’ I snapped it up within the day it was listed for a reasonable price I think. I know the frame size wasn’t quite the same as the 15inch JMC original, but it would be good for me at 6’ and I already had a 16inch Zaskar that the misses uses, which when I ride with a short stem is impossibly cramped and difficult to wheelie. My knees almost hit the handle bars ! But it was another step in the right direction compared to my fumblings to date.

Everything got swapped over again for a second time in quick succession and all the unwanted old stuff sold off again. Most of which made a profit and resulted in the FSX fork costing me £75 ! 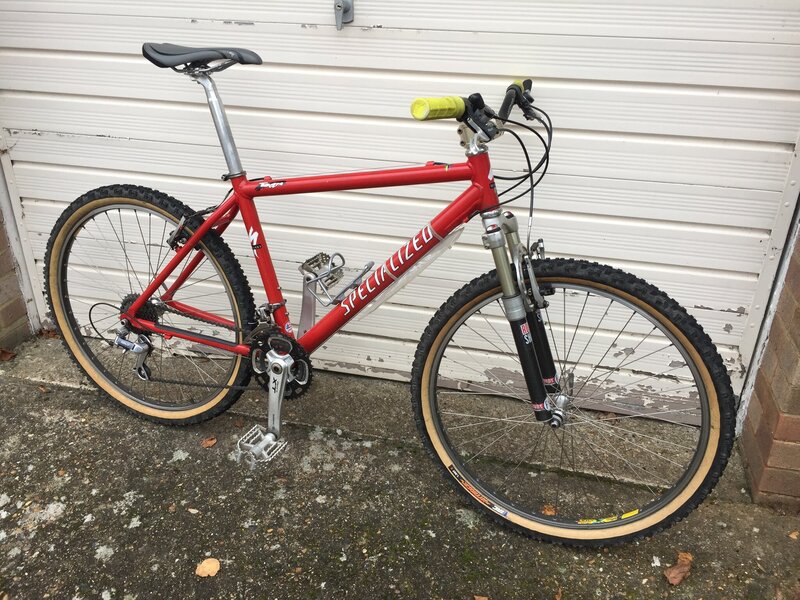 what next for year 2. The beginning of the hard part really. The details. The bits that make it just right. I assumed at least…

Hard part no1 that eluded me for far too long we’re the Onza Ules yellow grips and the grey Specialized Prolong saddle. I made do with adjusting some yellow deathgrips to accommodate the shark bites on the sleeve, whilst still being lock-ons Knowing that the cockpit was gonna be on and off like a tarts dress in the months ahead until it was right. The same grey saddle that Martyn had went on as it was just £15 new. (Once I’d unstitched the red GT label off it!!) 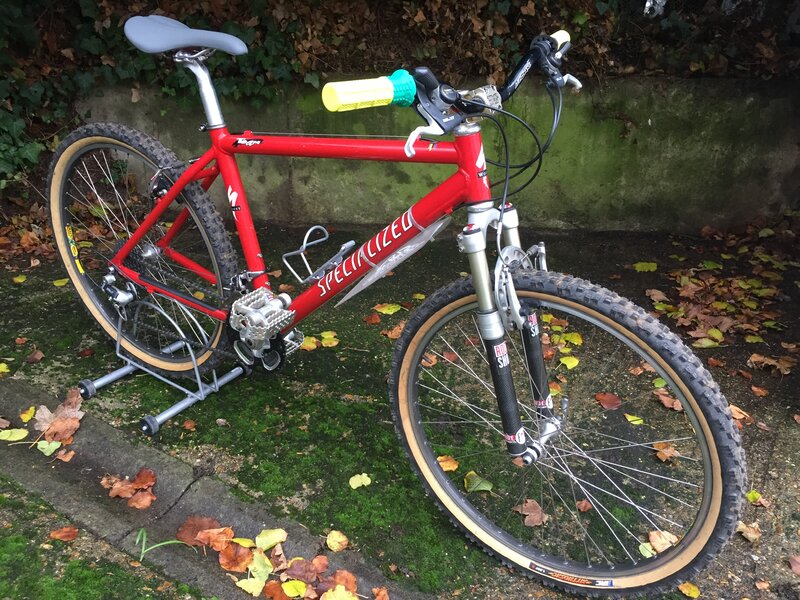