br0qn said:
Beginning to wonder if I should take something less precious and use it as a commuter and keep the Marin build true to form or if something like a riser bar/box stem would just totally ruin things.
Click to expand...

Provided you not sawing bits off the frame.....what harm you actually doing?!

If somebody don't like it, they can change it when its theirs!

Provided you not sawing bits off the frame.....what harm you actually doing?!

If somebody don't like it, they can change it when its theirs!

Thanks, I appreciate that. Just read your new thread too which is sobering I'm sure for some.

I'm mostly concerned with whether or not I can make this marin fit. I found a bike I couldn't pass up which has a top tube about an inch shorter than the marin and it's pushing it.

Anyway, build paused as I return home, maybe get some time to focus on clockwork or merlin
V

That's much too pretty for a DD IMHO, I trashed by '95 S-Works 'hopper commuting, wished I'd just used a crap bike.

This bike is begging for short bmx stems, nice risers and a fat happy man to ride it into the sunset

Much has changed in a short time.

I had a stack of parts all planned for this but another bike came 'round that better resonates. I didn't mean for it to, it just....happened.

So this past weekend was planned build weekend. But I didn't get far... 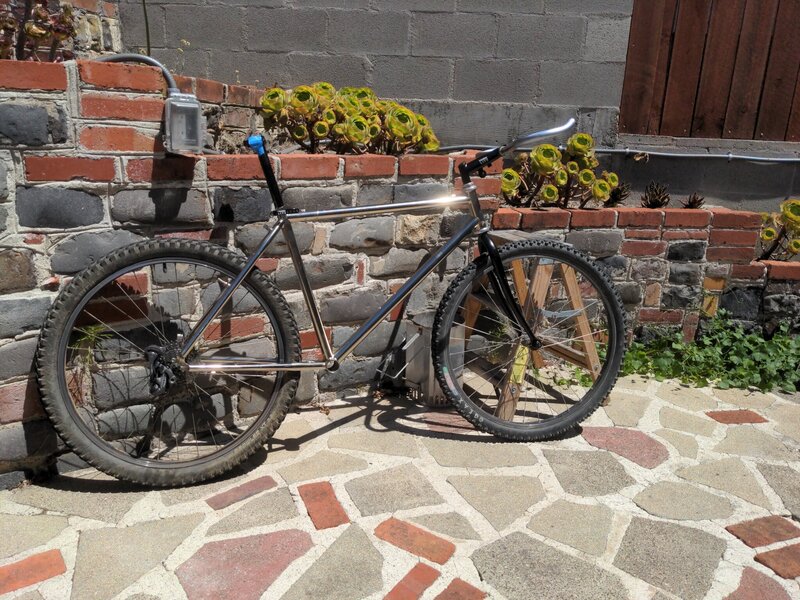 that other bike got all the attention.

I paid more than I ought to have for the frame so I have an idea to use the stripped parts from the other bike, throw them on the Marin and build it up as a commuter and probably list it for sale locally to try and break even.

But it's soooo nice. I wouldn't even consider letting it go if it was the 15.5"

If anyone here thinks they might want to save it from commuter status, I'm sure we could work something out. May make a thread in the classifieds.
Last edited: Tuesday at 18:10
You must log in or register to reply here.

Klein MC1 Attitude- the bike that bit me first