This poor neglected and abused Super 8 had been for sale on FB market place for a couple of months with the price gradually dropping. It eventually got to a price I just couldn’t say no to.

Lowlights;
14” and as such is way too small for me to ride
Just look at it
Ruined paint
Dreadful stickers
White RF bar and stem (as tatty as the rest of it)
Worn anodising on the stanchions
Wrong shock and mount mean it sits soo low and too slack, and the shock rubs the top tube at a standstill
semi slick XC rear tyre

Looking forward to getting started. I’m not exactly sure what to do with it, I’m thinking black with custom decals in a red-orange fade to match the forks, but millenial SCs we’re known for their lairy citrus hues so I may just go nuts.

Spec wise I’m not too precious about keeping this one period. I may swap the fork for A spare set of 151s I have because I’ve got a Boxxer-mount Hope 6-pot with nowhere to go at the moment - but I think these x-verts suit it. A 24” rear would feel appropriate as well, but i like the matching set of 321s.


I collected yesterday but haven’t had a chance to inspect it properly yet so here’s the advert photo; 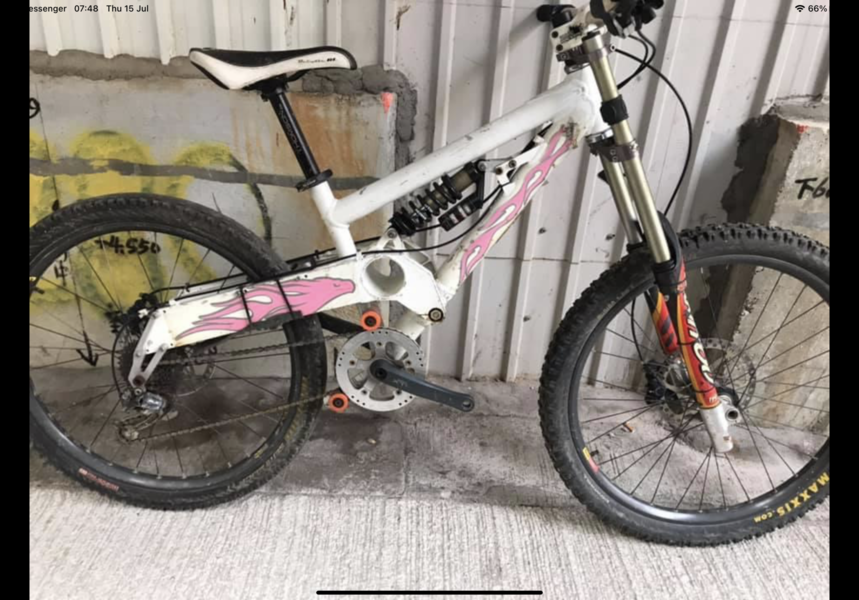 Love these, interested to see what you do with it. What's going on with the shock mount, looks like it's either got a bolt missing or has been made so that shock clears the frame?

Couple of pics of a similar project I did, it's been moved on now though. Lairy colours would be great!

Wow you did a great job of it!

The shock mount is very odd - no bold missing, it’s a CNCd triangular shaped block bolted in three places. I presume like you say, done to make the shock fit. I’m going to play around and see if it can mount in a different orientation to pull the shock away from the top tube. Not perfect but it’ll at least be rideable.

That'll be a great project. You'll find it tricky to get any spares for the frame. Is it complete? Those shock mounts are like rocking horse

For the mount, cant be bothered hanging about hoping one might turn up - I’m going to have one machined. Someone on Vintage DH Bikes FB group very kindly measured his and did a basic drawing for it. I’m going to modify slightly, rather than having a slot going all the way through, I’m going to have it drilled through but then bisected by the large circular hole top to bottom. The way the original works, as far as I can tell, the two mount bolts only take force in one direction each. By closing the holes I think it’ll share the load between the two (if this explanation is terrible I’ll do a diagram). I’ll then have it sprayed as part of the respray rather than leave it bare metal. The plan is to head over to Fiverr and have someone draw it up properly in CAD and then send it for CNCing.

On the subject of respray, I’ve almost finished the line work to start putting together a few options.

I was thinking of matching with the forks; Black with red inside the swing arm and ’coke can hole’ and red / orange decals, but when I mocked it up I hated it.

I’m going to mock up Audi Nardo Grey in place of the black and see how that looks. Once I’ve got a couple of options I’ll share here. Ideally I’d paint it myself but for some reason spray paint is really difficult to find here in Hong Kong - I’m used to being able to walk into an auto store and have whatever colour I want mixed up in cans!

Wheels-wise, I may already have a solution. My San Andreas has Sun Rhyno Lite double walls. Also available in 24”, so I may look to put the 321s on the San An and use a matching pair of Suns on this.

I had a bit of an inspection last night. The shock is the right size, so that’s good, just needs the straight mount. Forks-wise I’ve enquired with a company in New Zealand in the hope they can supply a service / seal kit.

It’s been a while since it has been taken apart - anything I went near with a spanner or Allen key had that rancid oil / old dirt smell.

This weekend I’ll clean it and get the stickers removed, and probably dismantle it so it’s ready for shot-blasting.

It was clearly a good purchase - I’ve already had offers for the frame, forks, cranks and MRP that would pay recoup what I paid several times over - but she’s not for sale.

Sounds like you've got the skills to pay the bills. Keen to see how this one turns out!
B 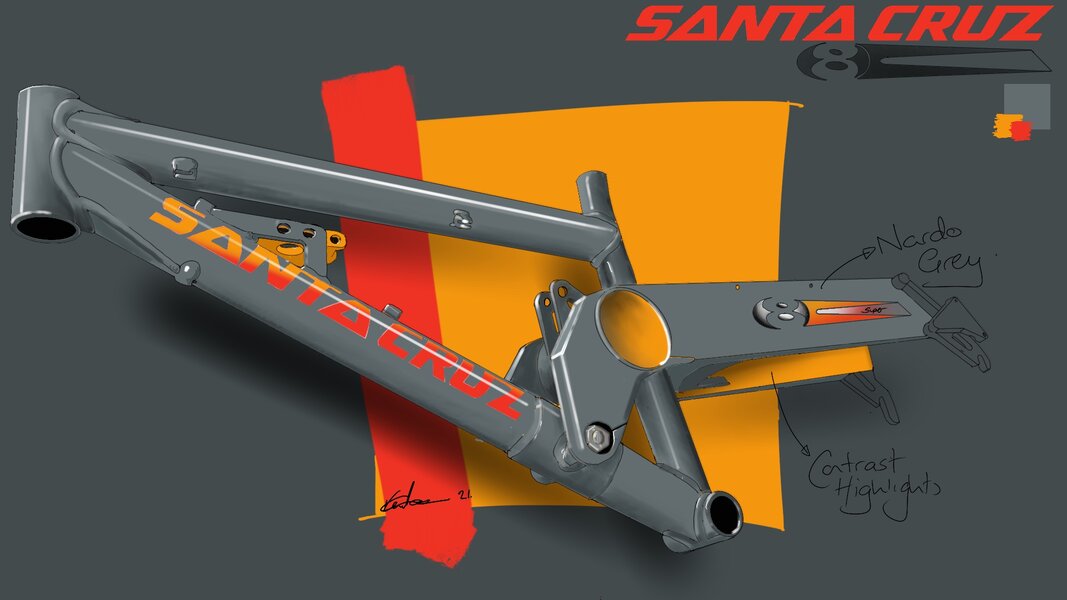 I like the Nardo Grey, not too keen on the decal colour though, but thats always going to be subjective.
W

My early Bullit had a similar mount, you were supposed to be able to slide it back and forth to adjust. Apparently nobody actually tested that as it would just slam back to the slacker position the first time you went over a bump.

They replaced them with mounts that didn't have the slot at some point. I got a warranty front triangle and they sent me the newer mount as well.
You must log in or register to reply here.