About time I started a thread on this one as sort of know where I'm going with it...This bike was not on "The List" (I nearly have all the bikes on "The List" bar a very early San Andreas Mountain Cycle but it may take some finding)

Anyway Boxxer gave a heads up that he had spotted one in The Edinburgh Bike Station, a bike charity. Having seen Spud's intriguing and unusual bike and the fact a week later I was off to Edinburgh for 5 days on a conference I thought it would be rude not to pop in and take a look, so I arrived on the Wednesday night and immediately got the bus up to the shop (Edinburgh public transport is amazing, especially as I live in the wilds of north Yorkshire where a bus a day is a luxury). The Bike Station is crammed with parts and bikes and also has an amazingly kitted out workshop that can be hired and they also do bike maintenance courses also..definitely my kind of place....anyway the Porsche was not an early bike like Spud's but a later one using an LX groupset and not the Sachs Neos of the first generation. The wonderful Votec fork is the air version though not the early elastomer one. When new the bike looked like this... 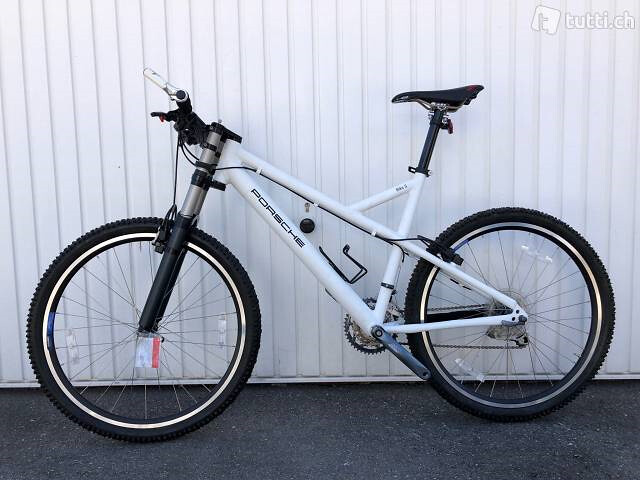 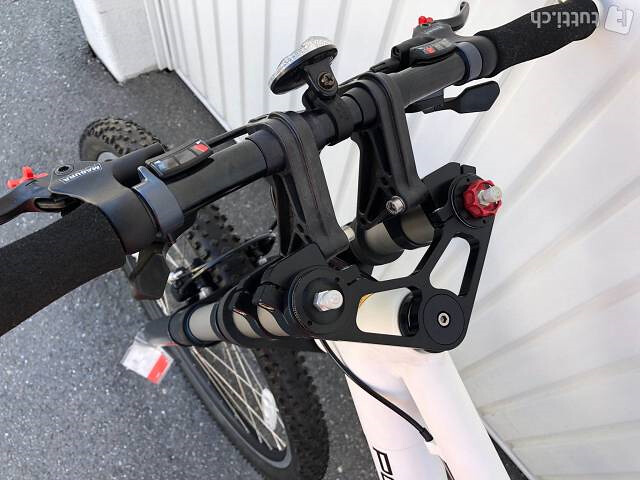 These photo's were taken from a swiss advert for NOS one. I think the white looks a bit bland compared to the wonderful Porsche Guards Red. My bike was considerably more used and very dirty. Also the later Bike S had some big issues with the bar clamps which were originally alloy but for some unknown reason were replaced with thermoplastic which had a tendency to fail so Votec (the manufacturers ) recalled as many bikes as they could and replaced them with the alloy one's. My bike (as well as the one above still had the thermoplastic clamps). I was keen but the price was way too high (fine if it was a Gen 1 in good condition), the manager wasn't in until the next morning but as my conference didn't start until the afternoon I said I would pop in next morning.
So back to my Premier Inn and a quick message to Mr Spud who gave me all the info I needed and so next day I went back and spoke to the manager Steve (a very nice chap of my vintage and a fan of Retro Kona's), anyway I explained the problems with the Porsche cockpit (It is fixable but at a cost) and how I didn't want any of the LX stuff on the bike, just the frame forks and Magura's and he could sell the LX groupset complete for a reasonable sum. I offered to strip the bike there and then and if they had a bike box I would pack it and arrange courier collection. Steve agreed my price (I tried to be fair on both of us as the money they get goes on bike related projects). So I was let loose on their Park Tool Wall (always a joy) and was even given a Park Tool Apron!! Stripped the bike and this is what's left. 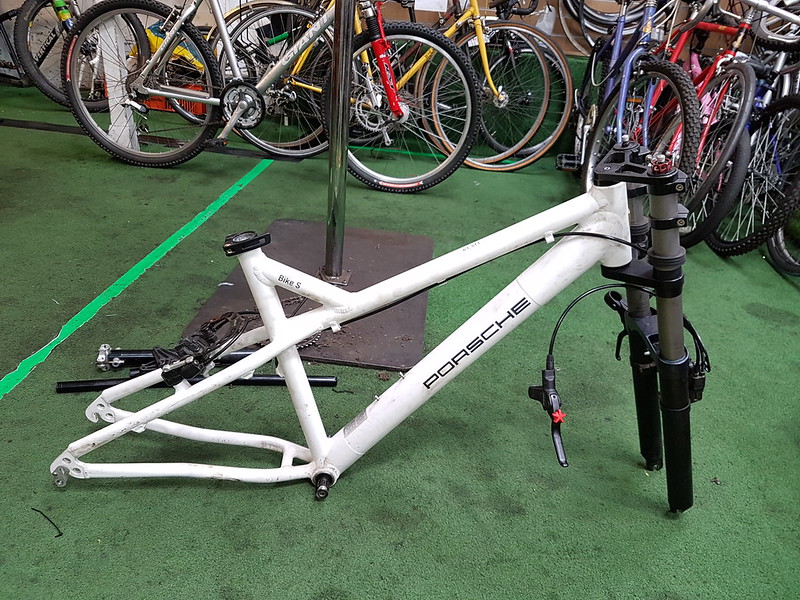 A bit dirty and down trodden BUT I have a plan...Think Porsche Martini Racing and you'll be on the right lines...well I'll leave it there for tonight as I do like to ramble on but I do love a good bike story :roll:

I wouldn’t swap my all elastomer forks but by all accounts you’ve got by far and away the best ones,

Looks like a great starting point, given the condition you’ve scope to go in a Myriad of directions and the Martini sounds intriguing given the high standards of your builds.

A good thread to keep us all entertained over the cold months ! The Martini colour scheme will be a great addition to plain white. Hopefully you’ll go with Pearlescent white with the Martini colourways

Oy....I'm working on it. It is down from the garage hanger at the moment , just have reached an impass with tyre choice. Would like some non tanwall grey or white tyres but the only thing avaliable are 1.95 Kenda's and need 2.1's really...any idea's?

Right then as Mr Spud "U" Like has been badgering me here's the next instalment. 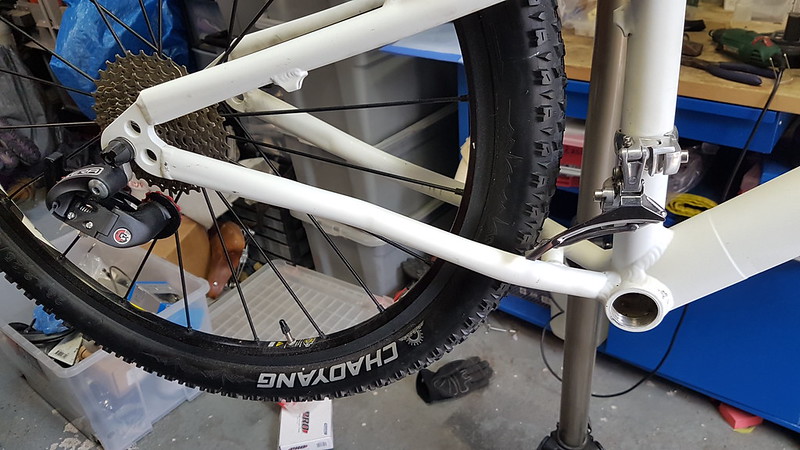 Groupset wise I am trying to replicate the earlier Bike S by using Sachs components. In 1998-9 Sachs were bought out by Sram (I think principley for Sachs grip shifts as they were superior to the early Sram versions). Sram then produced Sachs style grips and derailleurs under the D.I.R.T and Attack labels.

I have a Nos Sachs Centera rear derailleur but front mech wise the equivalent derailleur was never made for the large seat tube. I have a Neos mech that is shown in the picture but I am not sure it matches. I could use a Sram X5 front mech which is the same as the Sachs Centera but does not have the all important Sachs logo on it

I have to agree this is probably the first bike ever that looks far better wearing black walled tyres, so much so amber / skin walls would be plain wrong

Also liking your choice of wheels


Front mech - that earlier silver one looks out of place and also have to agree it needs to go in favour for something black.... but what !

Yeah, I agree with you spud on all counts. It will be my first retro without amber walls, I have been looking at Schwalbe Rapid Robs with the white stripe.
Mech wise I may get an X5 and see how it looks

If you're looking for German black tyres, how about Continental Survival Pro or Explorer Pro?

G
Which bike to buy
2