I got my first MTB on my 13th birthday - a 1993 Univega Rover T2.5. Univega were not a particularly well known brand in the UK at the time, but developed something of a following I suppose. It was an entry level model but compared to the similarly-priced Halfords-based dross of the era (I forget whether it was the Activator 1 or 2 at the time) it was clearly a 'real' MTB and I was sold on the one in the local shop which had a really smart smoked chrome finish and rapidfire shifters. It was also way lighter than anything else I'd tried. I had it for a few years until the only original part left was literally the frame itself. It took a proper beating over about 3 years and I eventually swapped it for a Rockhopper which I never felt anything like the same affection for.

By chance I saw a Univega on ebay lately, not exactly the same the frame, but very close - a couple of years more recent and a better spec, but in exactly the same smoked chrome finish. My size, cost next to nothing including postage, so I couldn't resist and suddenly had ended up with a project that I really don't need. Now it's arrived, in decent nick overall, and I have to figure out what to do with it! It's currently my only retrobike and I'd really love to actually use it for something, but the only space I have is somewhere between my brilliant modern road bike and modern MTB. I always hear that gravel bikes are 'like 90s MTBs with drop bars' so I think I'm going to put that to the test with a drop bar conversion. Either as a gravel bike or a kind of tourer/for rides with the kids etc. I've got a good selection of parts left over to donate to it that I never got around to selling: a SRAM 2 x 10 drivetrain, a set of 1st gen ceramic Crossmaxes doing nothing, Avid Mag V-brakes, carbon drop bars, Charge saddle, and that should get me most of the way there!

I've started the disassembly as I can't wait to get cracking on this one! I wanted to get to the old bottom bracket out as this is the most likely sticking point (literally) on a 25 year old bike. Drive side was no problem, non-drive side stuck pretty tight. However I took my time, let plenty of oil seep into the threads, spent the waiting time bodging a bolt-on assembly for the tool to secure tight to the splines, and with a couple of wholehearted blows of the mallet (the kind you just can't do with carbon frames...) it was on its way!

The next priorities are going to be: getting a 28.6 front mech to work with top pull cable routing, 34/50T modern double crankset (hoping it clears the chainstays...) and SRAM STIs, finding some 1" headset spacers, finding a black 26.0 seatpost.

Should be a nice project, you seem to have some nice parts to go on it! I always found Univegas rode really nicely, underrated brand IMO.
You shouldn’t have too much difficulty finding the remaining parts you need. You could try using the mtb front mech, I found sometimes it does work despite the pull ratio difference etc. If not then a road front mech (with shim if needed) should do the job.

Fully disassembled this morning, weighed the frameset for reference and I've put on some of the parts just to I can check the geometry is going to work. It definitely is! Photos of how the outline of the bike will look below.

Currently has Panaracer Pasela 32mm on it but I may go with something fatter/knobblier in the end - I have a set of Kenda Klimax 345gs that would be pretty good for it.

I'm pretty pleased with the weight: frame with 1" headset fitted is 2280g, fork is 1075g. This one is going to be a lightweight build in the end!

Next I need some spacers for the BB - the chainring just about clears the chainstay but the crank arm doesn't. I'm going to have to get hold of black 1" stem spacers too, then probably a black seatpost though the 26.0 size is a pain in terms of decent options. Also waiting on some travel agents to arrive before I sort out the brakes.

Not far off now! It's all up and running, I've had a quick test up and down the street and the geometry's perfect after using a shorter stem and flipping it. Just a few more bits I want to replace: a black seatpost when something suitable in 26.0 shows up, black 1" stem spacers to replace the silver ones, matching red QRs and maybe some chainring bolts... 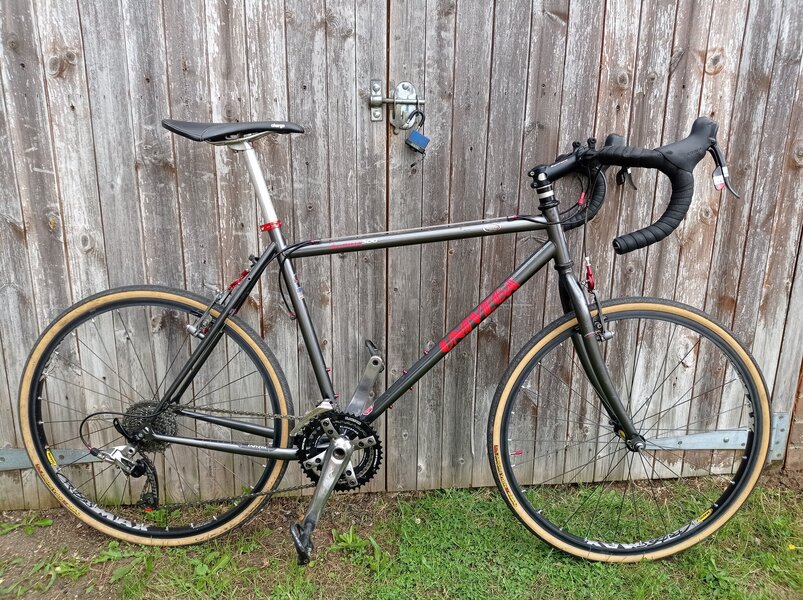 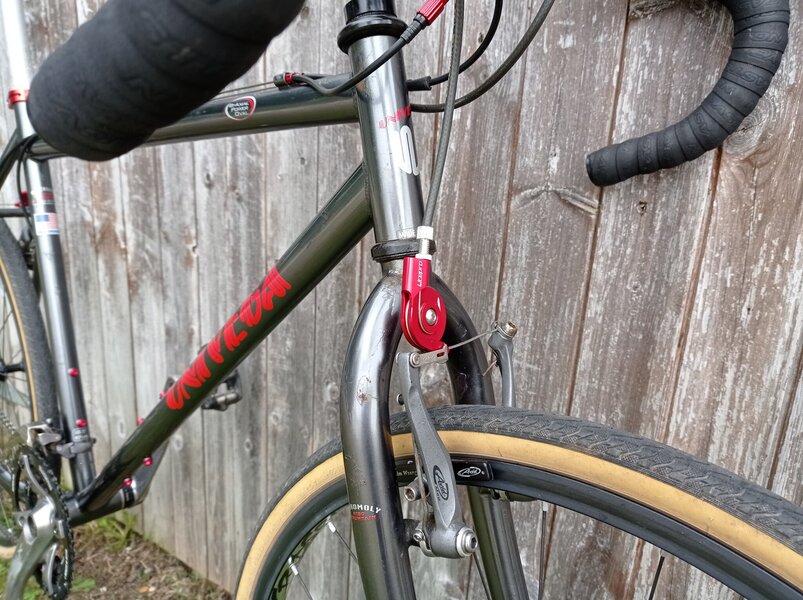 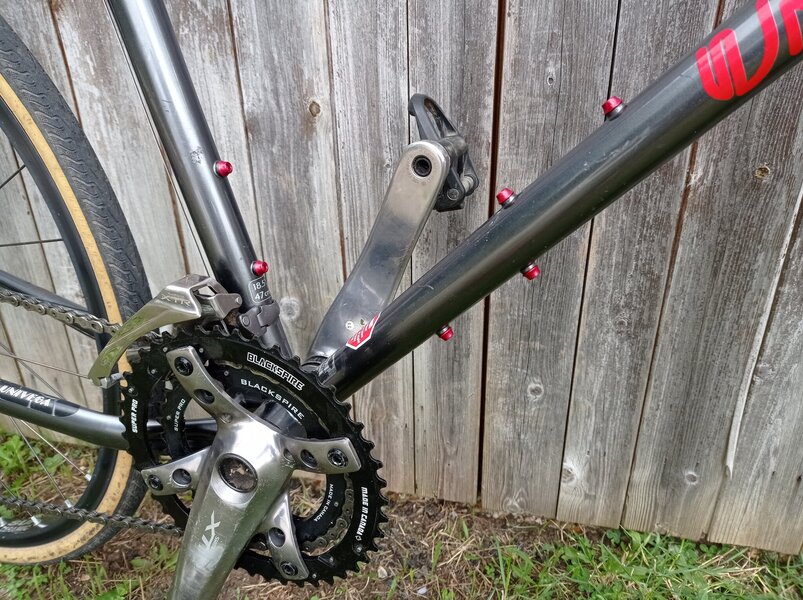 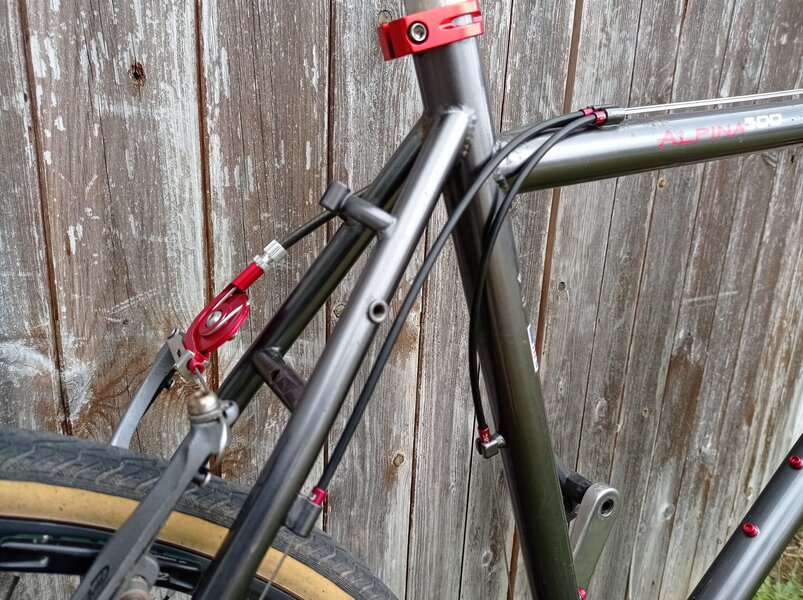 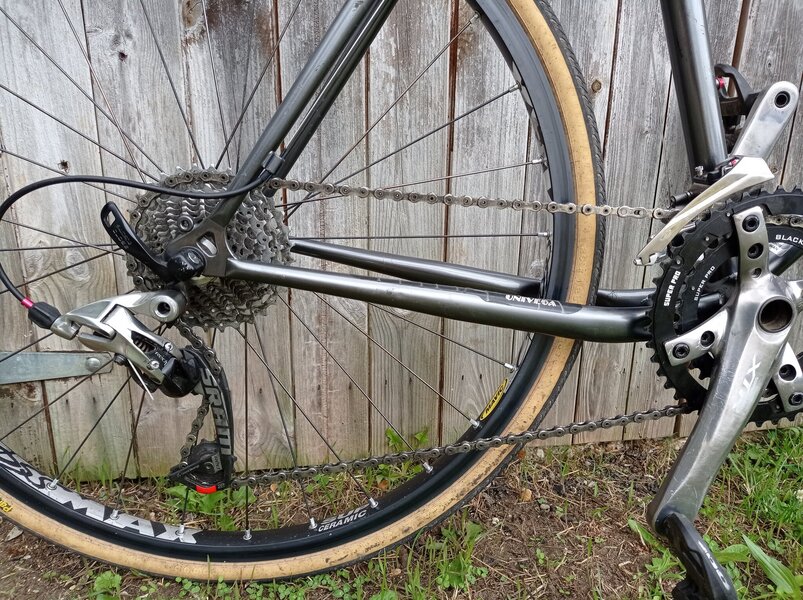