This beauty popped up on Gumtree local to me, I owe a beer and a huge thank you to @XTSTIMAN for posting a link on the forum. I contacted the seller and collected the bike yesterday morning. With a Hot & Explosif already in the stable I have always liked the idea of a Kilauea so am pleased to of grabbed this, just a Caldera to find now .

The bike was advertised with little details other than it being listed as a 19'' Kona, although this would be too big for me I figured it was local and cheap enough so would be worth saving. Upon arrival I was pleasantly surprised to find its actually an 18'' so is perfect size wise. The decals had been removed by the previous owner but it was clear to see it was a Kilauea. I gave the bike a quick check over together with checking the seat post wasn't seized, everything was good so a deal was done and off I went with a newly acquired 96 Kilauea.

So the bike has most of its original parts together with a kick stand and a rack, the seatpost and saddle had been changed as had the grips and chain/cassette but aside from this i believe everything else to be original from new. First job was to remove the kick stand and rack and then strip the bike down... 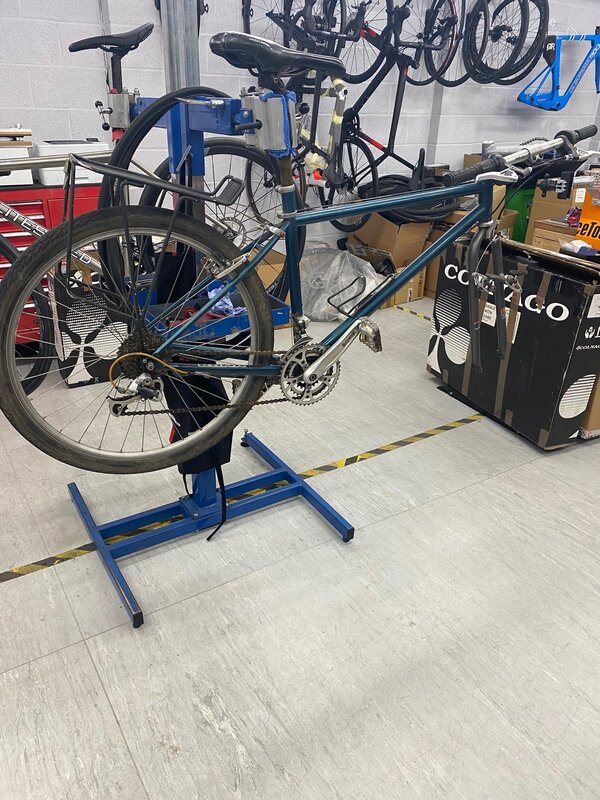 With everything stripped off the next step was to clean all the parts up and see what was salvageable/re-usable. The Easton Race Light bar cleaned up lovely as did most of the components, I took the time to strip the Curve chainset down completely and clean it, the rings/spider/arms all came up great. The headset was also stripped down and thoroughly cleaned and should go back together nicely. One of the brake levers is missing the bolt/pivot so a cable tie has been used in the past to hold it together, I'm confident I can fashion up a bolt and washer and salvage the lever. Whilst the gripshift works its not my bag so will replace with some standard shifters I have floating around. The cassette tidied up well so will likely be re-used with a new chain as the existing one has rust in various places. 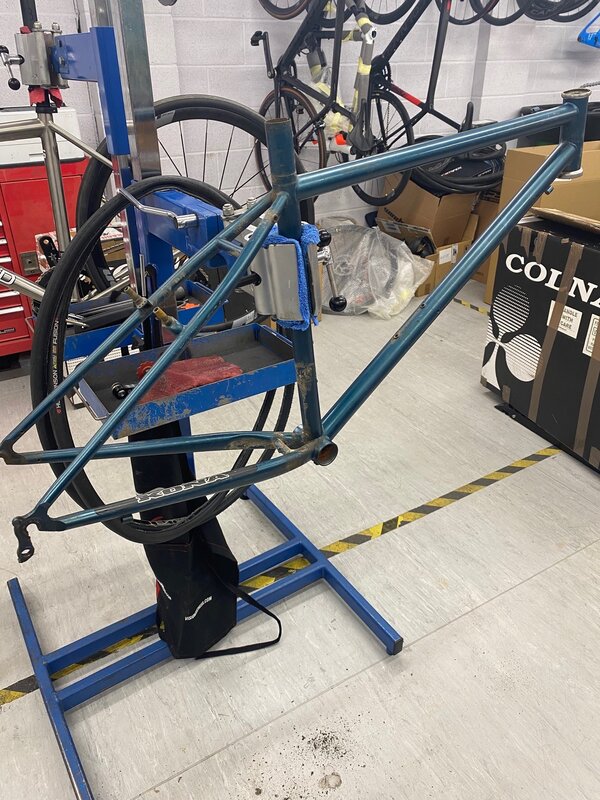 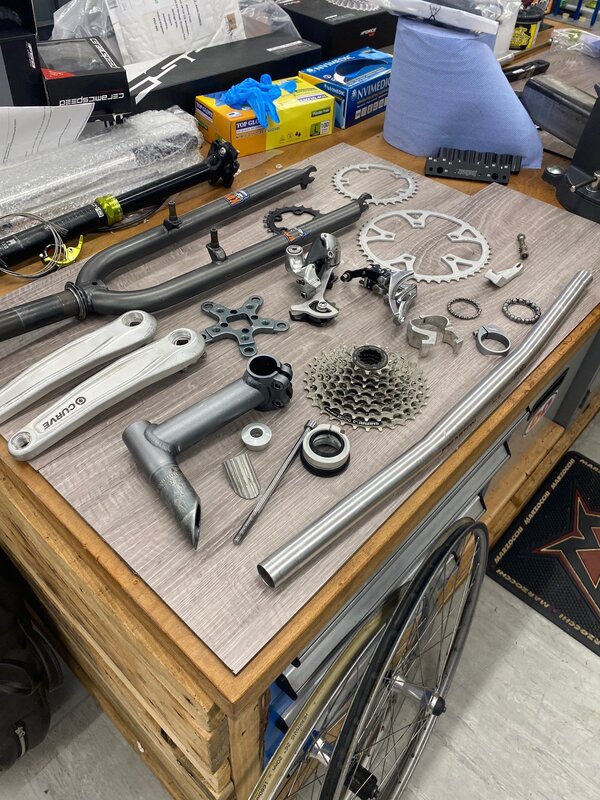 Onto cleaning up the frame & forks.. The frame is super straight with only minor paint damage from the kick stand and general chips/scuffs as expected from use/age but overall the paint is in good condition and should polish up well. There is a fair amount of residue from the decals so this will need to be removed as I plan to get some new decals from Gil. 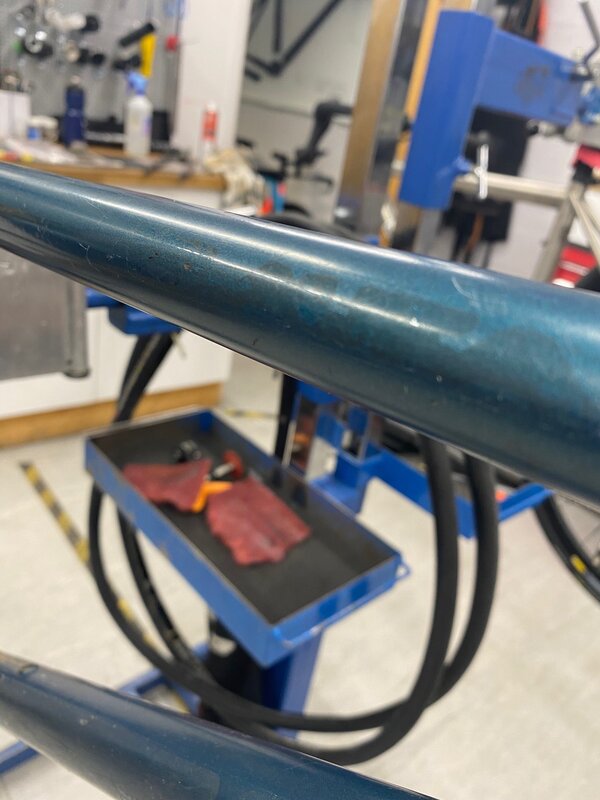 The images don't do the colour any justice at all, its a much more vibrant blue to the naked eye. The wheels cleaned up nicely but the rims are quite worn, I have the original wheels from my Lava Dome but they need a freehub body so I think I can make good one set out of the two and then put the originals back on the LD and swop the x517's onto the Kilauea. It shouldn't need many parts to get it back up & running so hopefully will be a quick re-build. 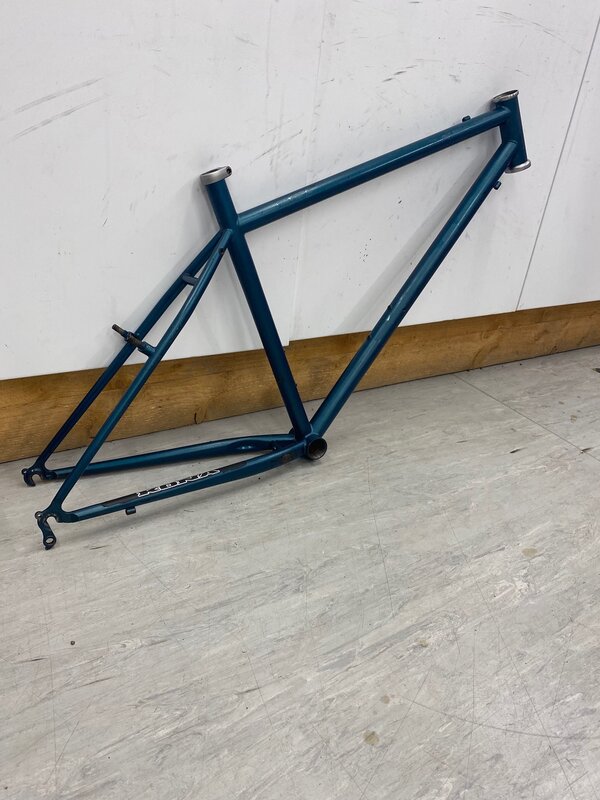 That's it for now, if anyone wants the tyres, rack, kick stand, grip-shifters, saddle and post let me know.

'96 Kilauea, one of only 2 bikes i ever bought new, 18" too, always wanted the 17" version they bought out later as the sizes were different to older Kona's. Great bike, though i swapped it for a Pro-flex 856 with a friend the next year as couldn't resist the shineyness
P

mk one said:
'96 Kilauea, one of only 2 bikes i ever bought new, 18" too, always wanted the 17" version they bought out later as the sizes were different to older Kona's. Great bike, though i swapped it for a Pro-flex 856 with a friend the next year as couldn't resist the shineyness
Click to expand...

that's kool, still have the pro-flex?

No unfortunately, though it did survive through years of abuse until sold a few years back.
F

I also bought a '96 Kila new, but i was working in an LBS at the time, so we got them at 50% of RRP. Easily one of my top 3 bikes owned. Sold it for more that it cost, and replaced it with a Muni Mula, which was far more inferior :-(
You must log in or register to reply here.