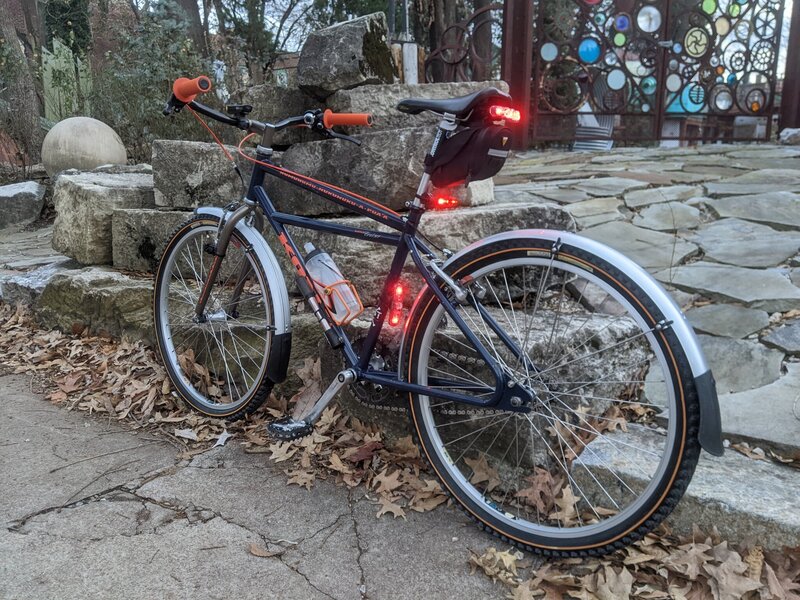 I picked this up in 2019, not even a week after I spent the most I ever spent on a bike before buying this 1995 Kapu. I could not pass up an opportunity to buy another 1995 Kona, though, and this time, it was a cruiser! I had just gotten home from work, sat down on my couch, and opened my phone to browse Craigslist. Up popped a notification that a Kona had been posted for sale, so I went and saw a posting for this: 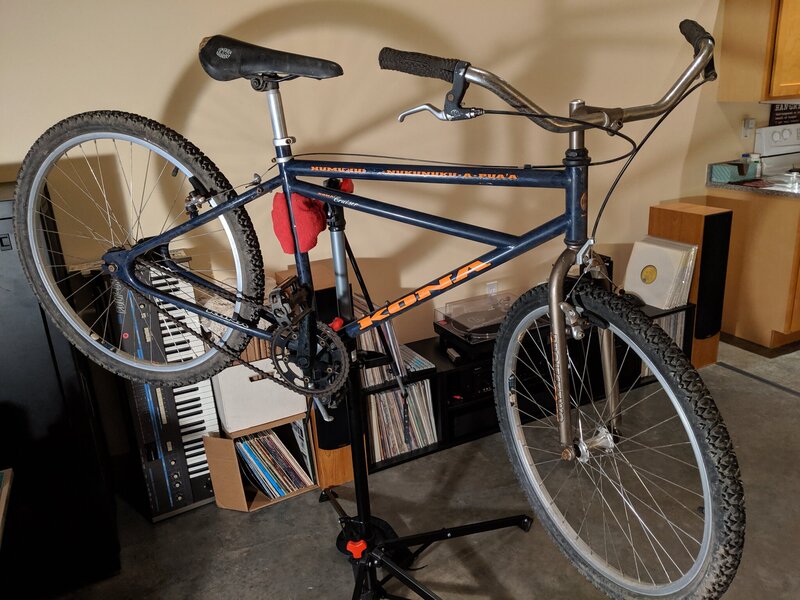 I bought it off some guy in East Alton, IL, who was selling all kinds of kids bikes. He let this go for $75, and I barely was able to ride it around the block. I didn't care though, because he didn't know what he had. It was all original, down to the tires. Most of the parts were shot though, so I got rid of the brakeset, seatpost, saddle (cut the leather off first), headset, BB, handlebar, grips, and pedals. 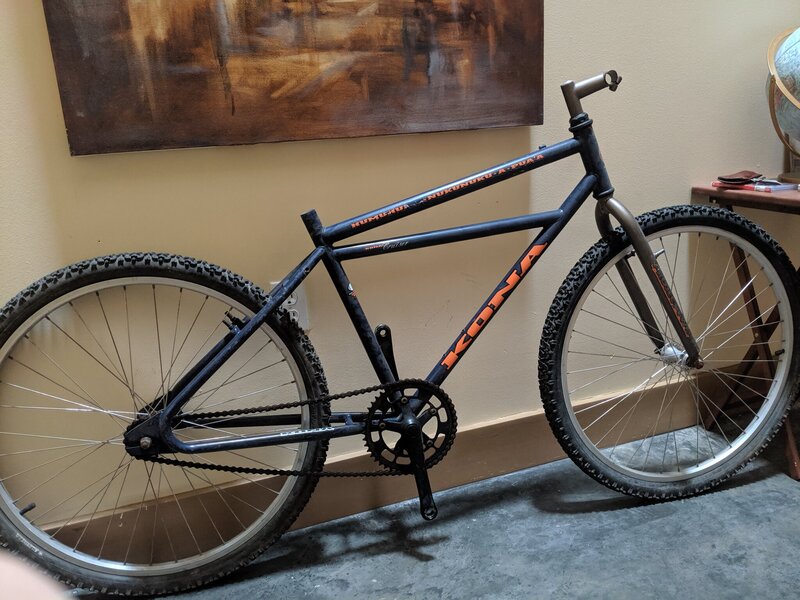 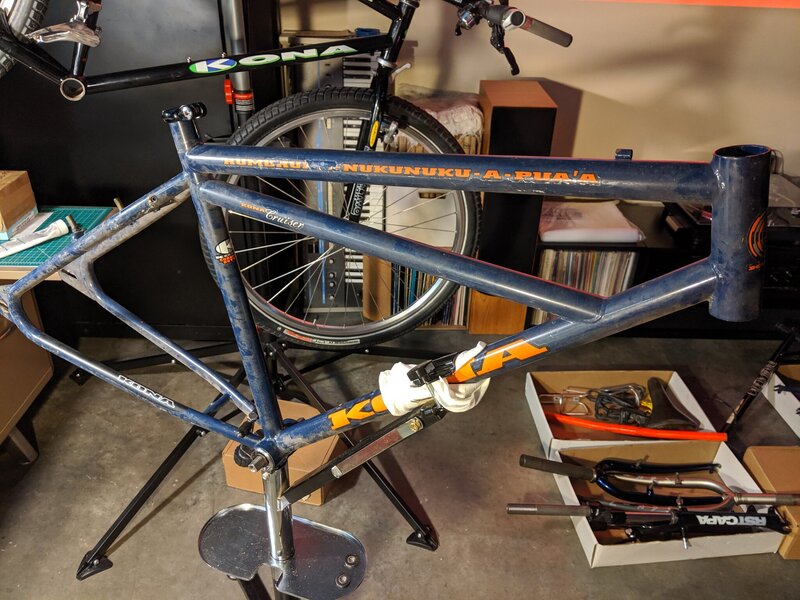 I sat on the bike for over a year before I finished it. Guen, the adorable black furball seen here perched on top of the unfinished frame, died unexpectedly early in 2021, and I lost all motivation to work on bikes. 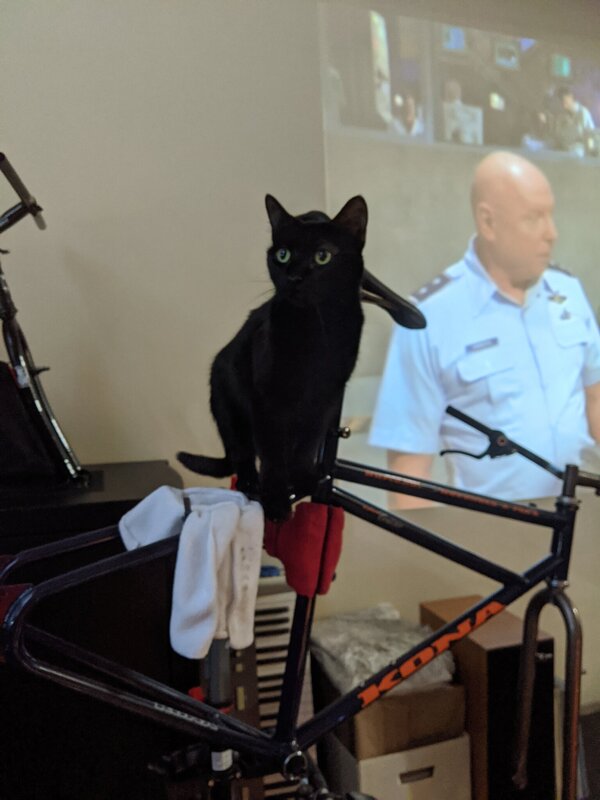 I ended up using the binder, front canti hanger, and dog collar on my 1992 Cinder Cone, and used that black binder for this Humu. I found some cheap swept back bars, and decided now was the time to finally use my stashed Dia Compe Dog Leg levers. As soon as I saw these on eBay years ago, I knew I had to keep them for a cruiser build one day. I also had some NOS World Class V Dapters, so I paired them with some M739 V Brakes that I accidentally cleaned too much, and now have a cool patina finish. The stopping power is insane. 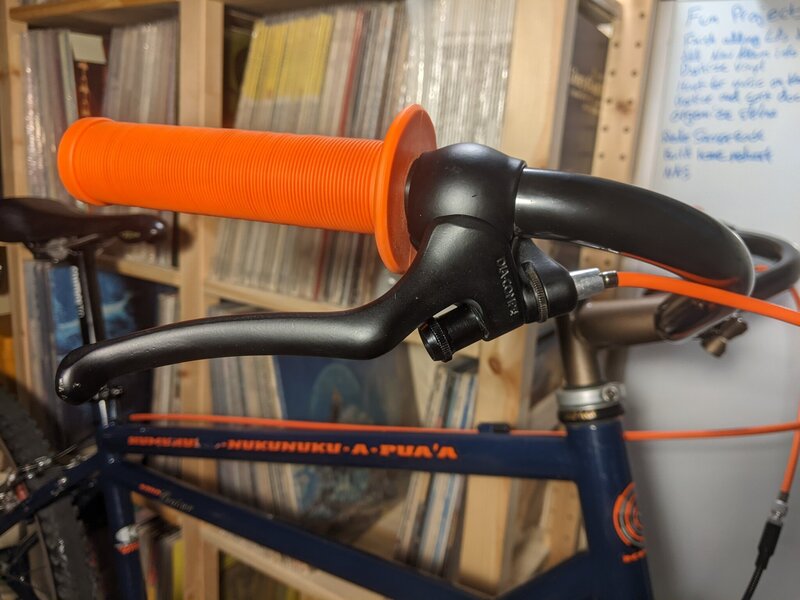 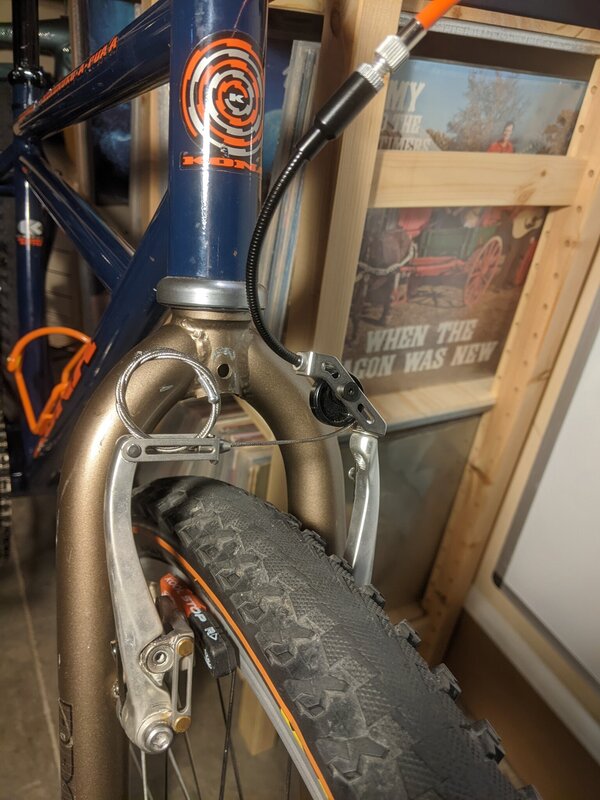 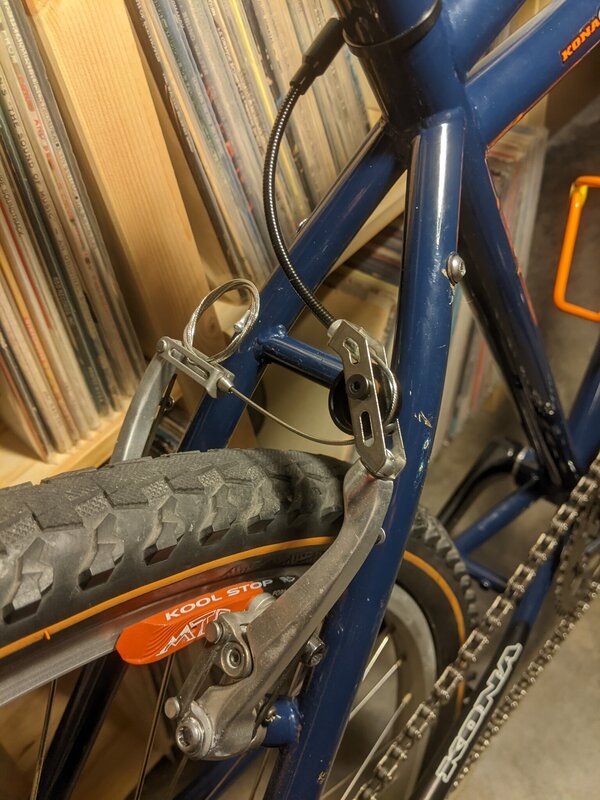 Here it is on one of the shake down rides around the block: 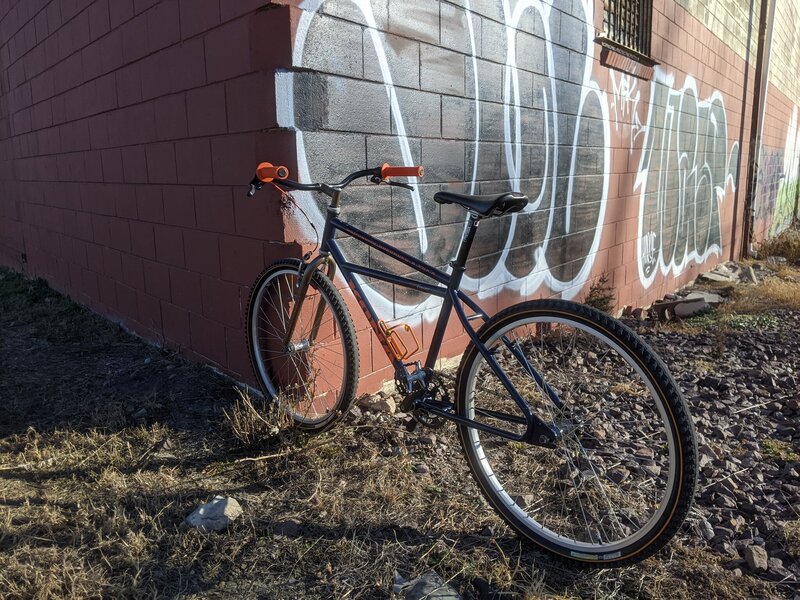 After thrashing it around Forest Park a few times, I dialed in the adjustments, swapped the original crank arms for some M730 175mm which gave me all kinds of power, and a ControlTech suspension post to soak up bumps. It's riding on some of my favorite tires, and what I used to commute and explore with for two years, Maxxis WormDrive, with orange sidewall stripes! 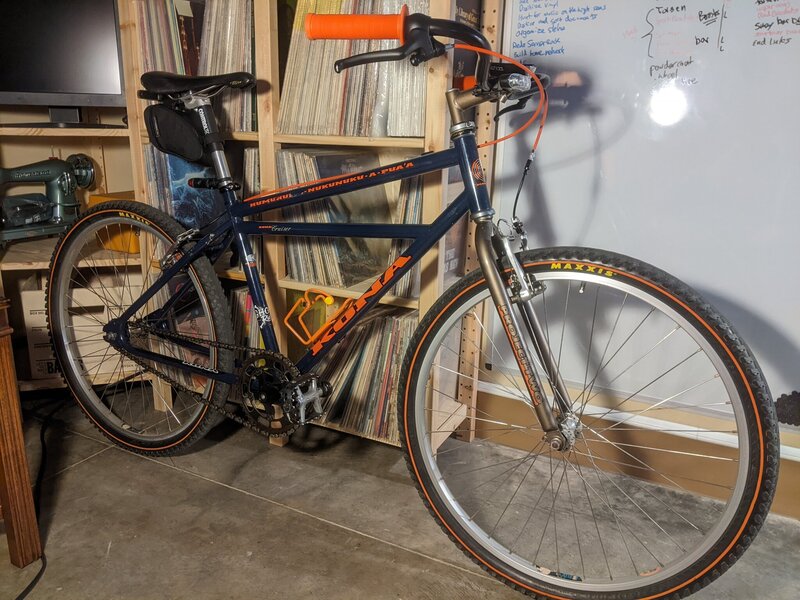 I also fitted fenders and some accessories, and rode more miles on this bike than all the rest in my collection combined in the last two years. I can't get enough of it, it's so comfortable, and I feel like I can go anywhere on it, and ride for hours. I don't really want to change much with how it's set up, besides adding a different front light mount, and adding some on frame storage. I'd like to utilize the space in between the two top tubes, and in between the rear fender and the seat tube. I haven't found anything that fits quite right, so I will likely end up making my own out of some Timbuk2 Single Speed Collection bags. That will require me making some patterns, and harvesting material from disassembled bags, but I think it's worth it for this bike.

I do have some cool and blingy parts to find to add that extra little bit to the build:

Awww, thank you! It's been nearly a year since she died. She was not even 3 years old.

Speaking of cats, this weekend, I tackled this little project. I recently got a Cat Eye Volt 800 for pretty cheap, after waiting a few months for one to show up on eBay. I wanted this light specifically, because of the swappable battery ( I like to keep spares for late night rides), and the HyperConstant setting (eliminates the need for a Rapid 3 flasher mounted up front). I also wanted to use this Cat Eye fork mount shown here: 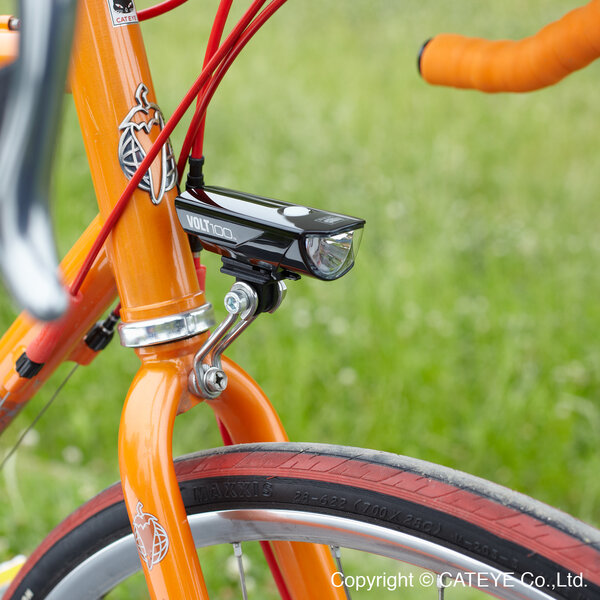 I didn't want to attach it to my fork though. Instead, I intended to replace the handlebar clamp bolt with a longer one, and attaching the mount underneath and upside down, pointing it up.

The original bolt, like most BMX stem clamp bolts, was M8 with an 11mm wide head, and about 20mm long. I needed one that was at least 35mm long, but every bolt I could find had 13mm wide head. This would interfere with the stem, so I decided to make my own 11mm wide bolt. I bought 5 of these bolts from McMaster Carr:

I don't have machine tools, so I had to do this with the bolt chucked into my hand drill, while I filed away with hand files, and ground away with aluminum oxide discs in my Dremel. Once the bolt was at about 11.2mm, it fit nicely with a little bit of wiggle room, so I stopped there. I also had to embiggen the bent steel inner radius of the Cat Eye mount to fit an 8mm bolt.

Here's the the new, untouched bolt on the left and the original on the right. I did not get a photo of the reworked bolt. 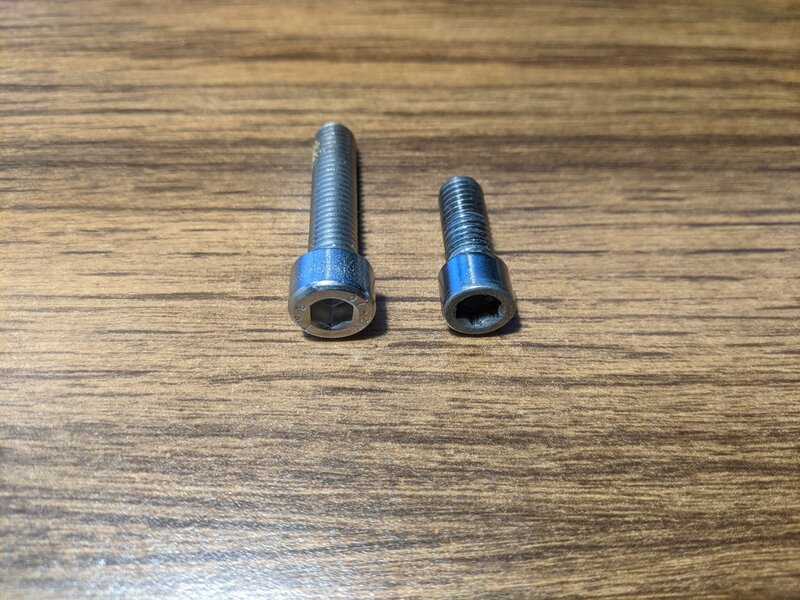 Here it is installed with a very small washer under the bolt head, a regular nut (Nylock already on the bolt) and two black washers, to add contrast. 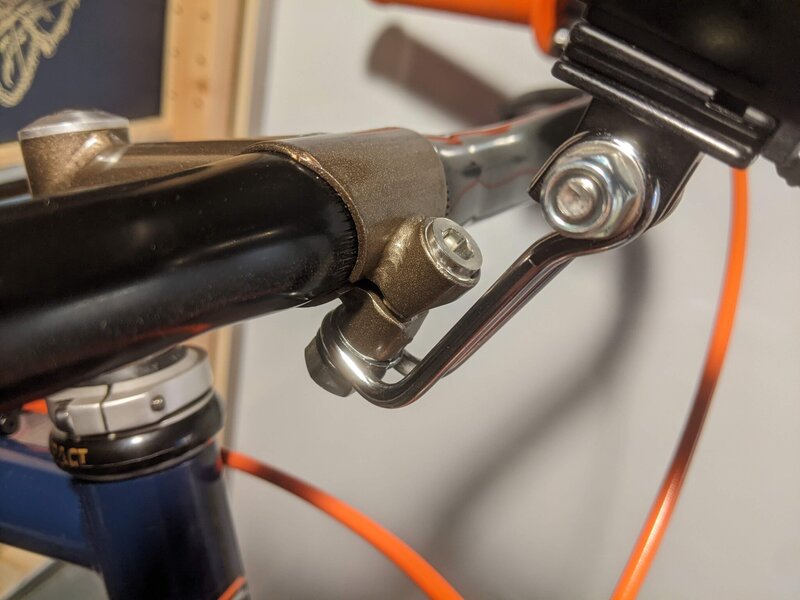 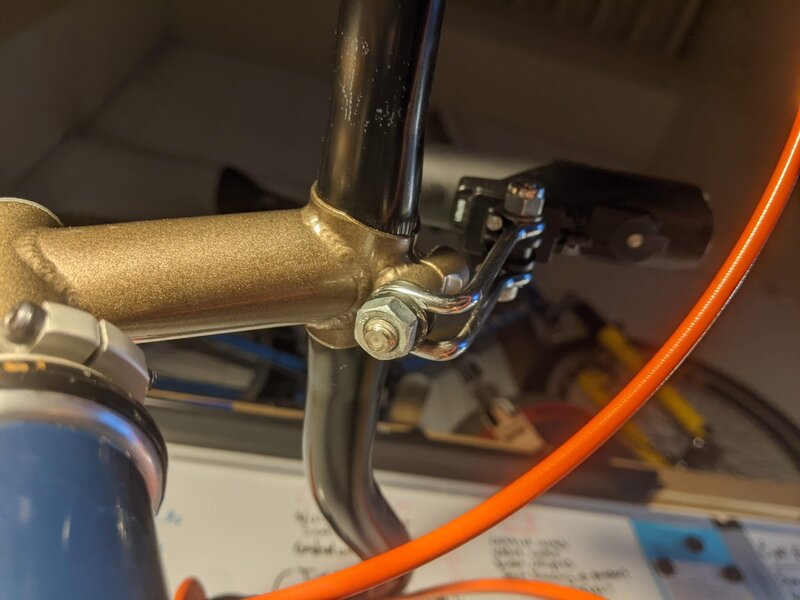 And here is the light attached, centered, and angled properly. It really cleans up the front end. 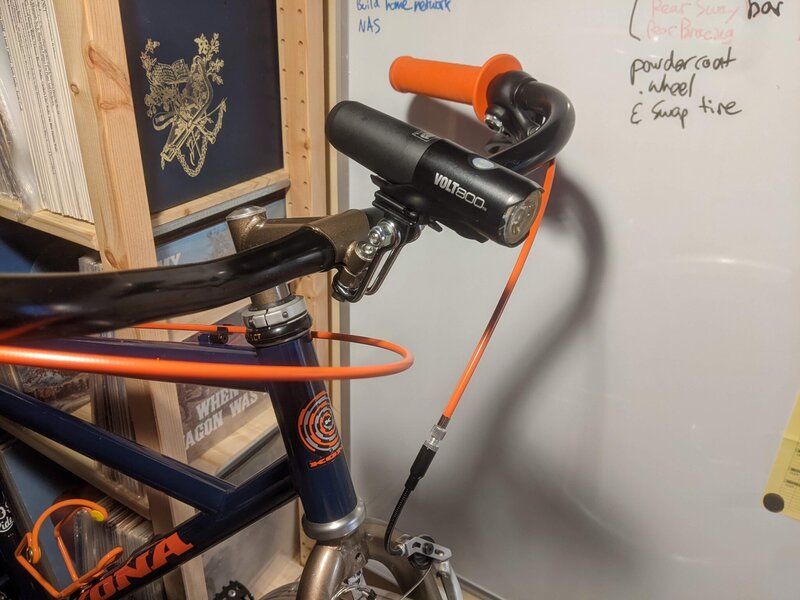 The light is very sturdy now, and I don't have to think about it anymore. I plan on getting an orange Cat Eye Padrone wireless cycling computer before I ride the tread off these tires this summer. I think it will fit nicely wrapped around the stem snugged all the way up, with the front part barely tucked under the light. We will see, and once I do, I'll post those photos here.

Humus are fantastic (and under-rated) bikes.

And I previously had a 2005 Humu-Deluxe (26er, the only year with disc brakes). It now lives with a local friend, and I still do any wrenching on it.

And I previously had a 2005 Humu-Deluxe (26er, the only year with disc brakes). It now lives with a local friend, and I still do any wrenching on it.
Click to expand...

Care to share opinions and/or preferences regarding the different versions?

Kona Fan
I took some photos on my ride today to show off some progress. I added both a front Sunlite rack, and also a rear Topeak rack, both with light mounts. 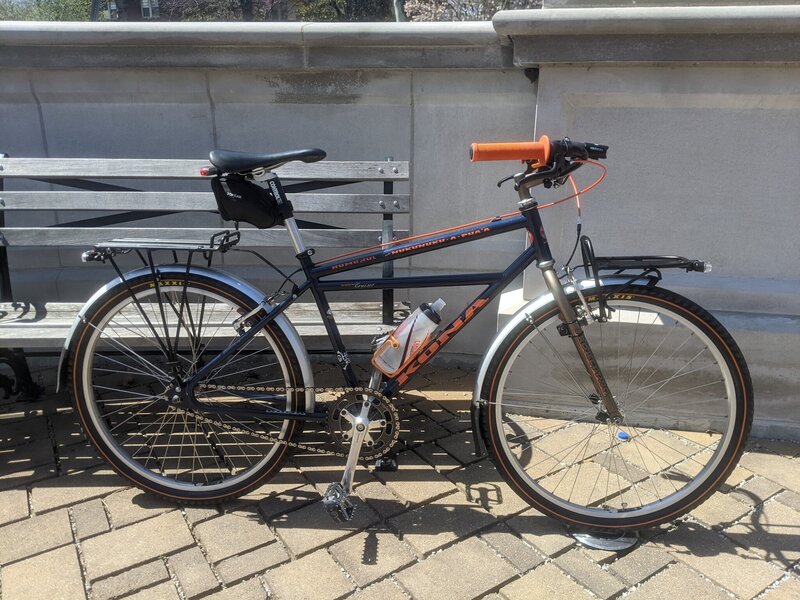 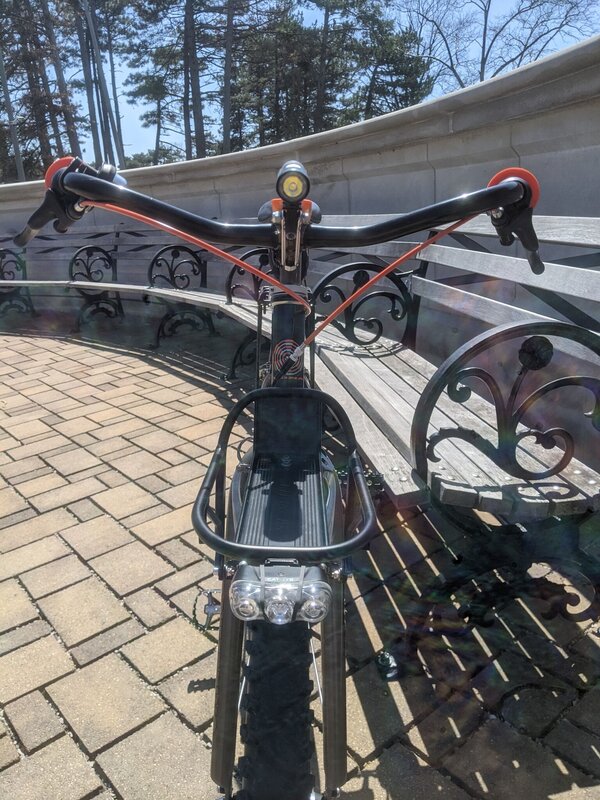 I also mounted a Cateye Padrone cycling computer to the stem. 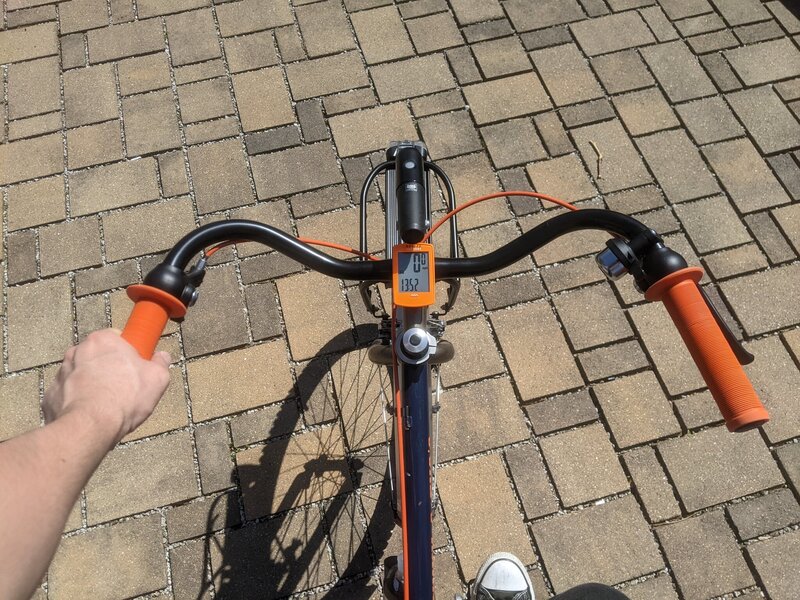 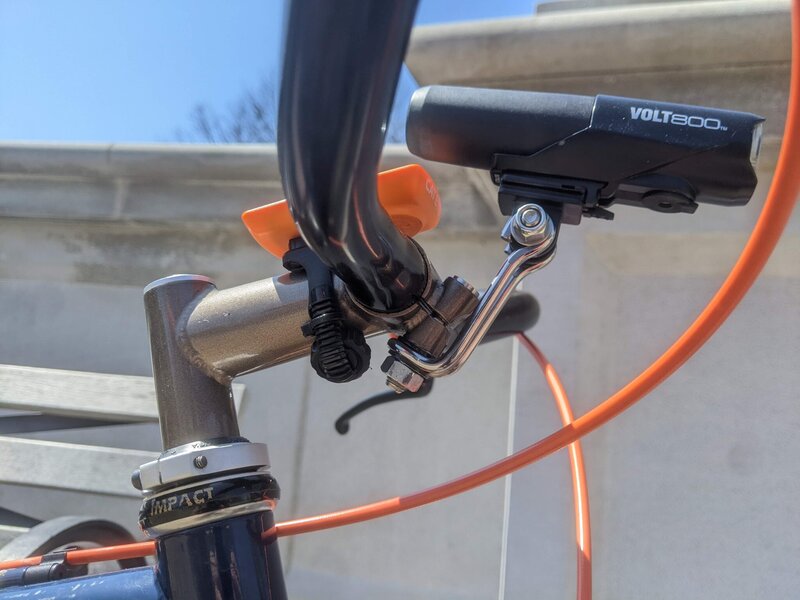 Lastly, I upgraded the front hub with a QR axle and ControlTech Ti QR bolt. 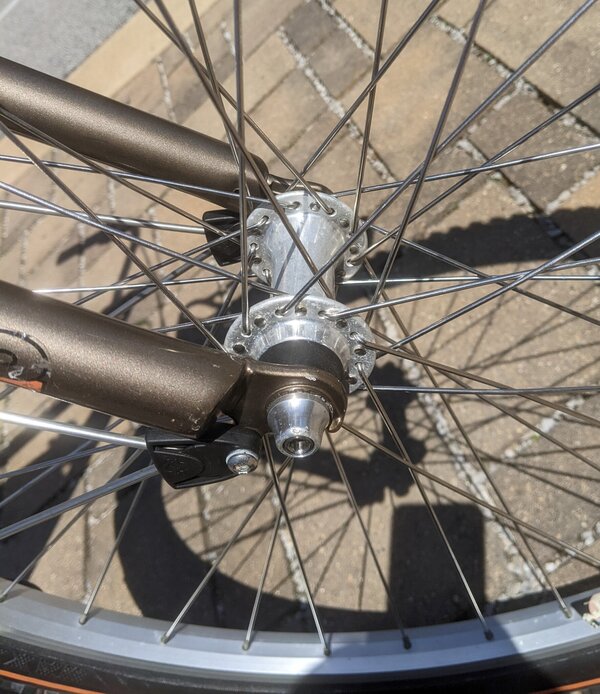 Here are some better photos of the brake setup. This shows the patina on the M739 calipers a bit better. I think I might be the only one running this combo on a bicycle in the world. I've never seen these paired before. 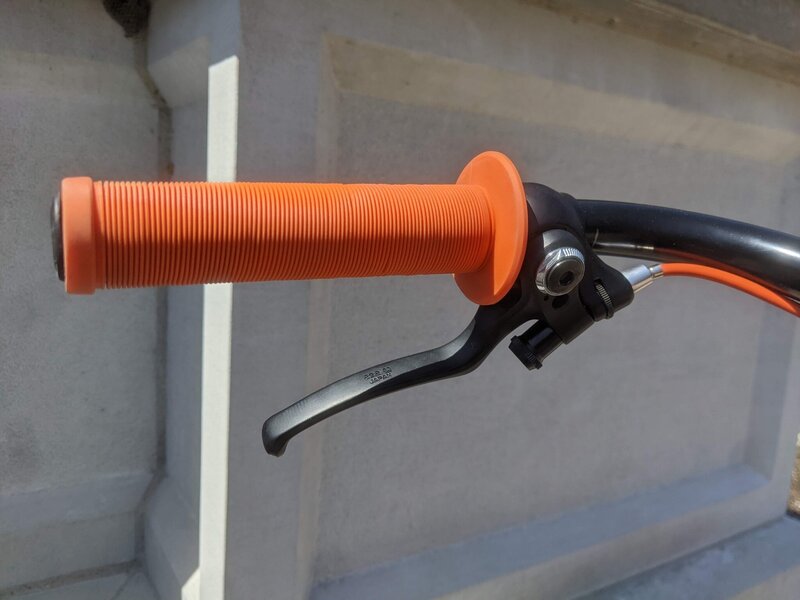 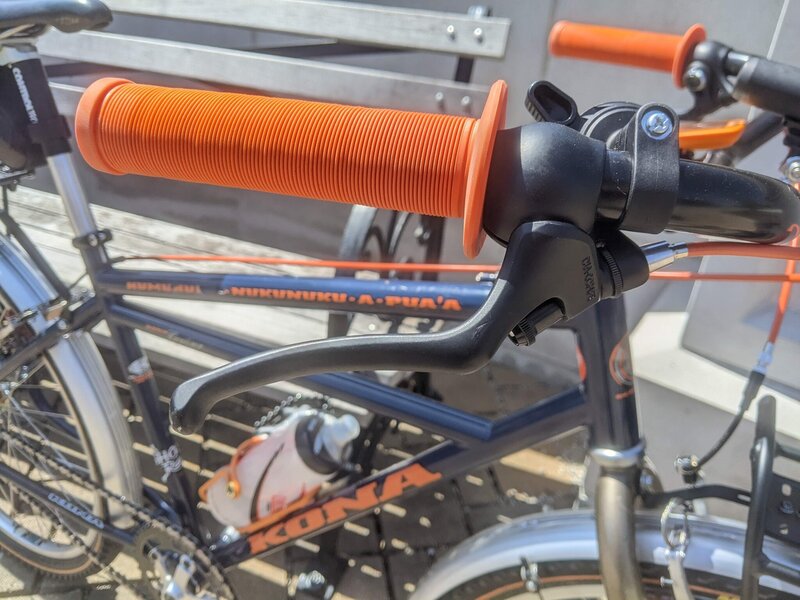 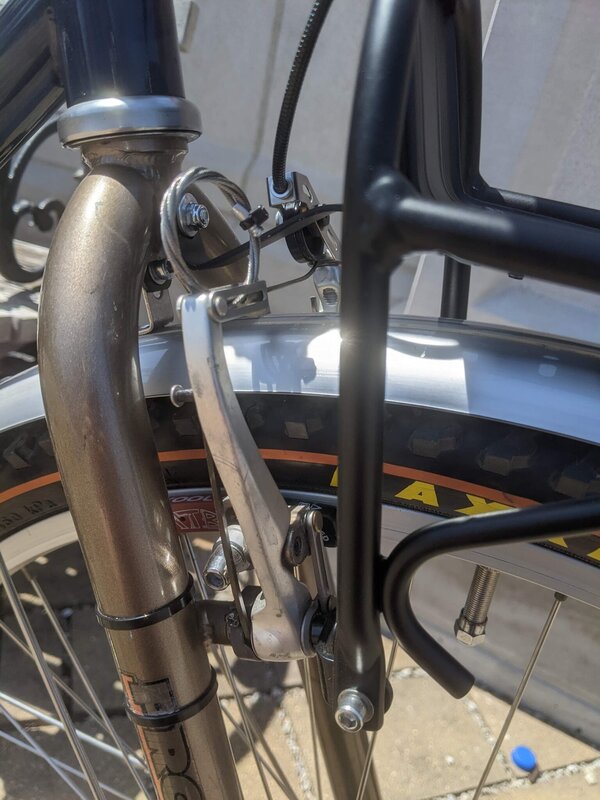 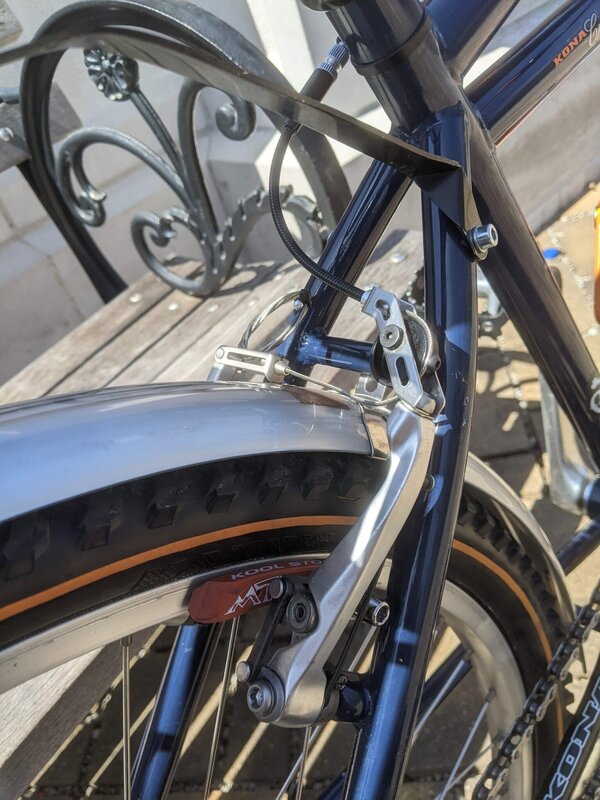 Here's a photo showing the patina and rust that I'm cultivating on the rear hub. When it gets to the desired orange color, I'm going to neutralize it and clear coat it, leaving it permanently patina'd. 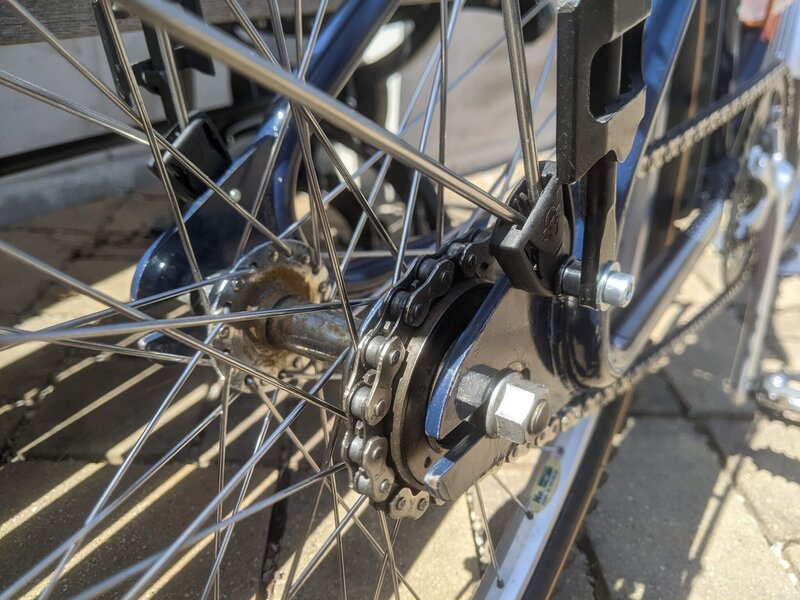 Kona Fan
Here's some bonus photos. First up is the bike fully loaded and damn near 50lbs. I have 10.5lbs of lock and chain up front, and a bunch of snacks in the new old stock Topeak original Quick Track trunk bag in the back (I guess it's no longer new lol) I also carried tools and spare tubes for that night group ride a few weeks ago. 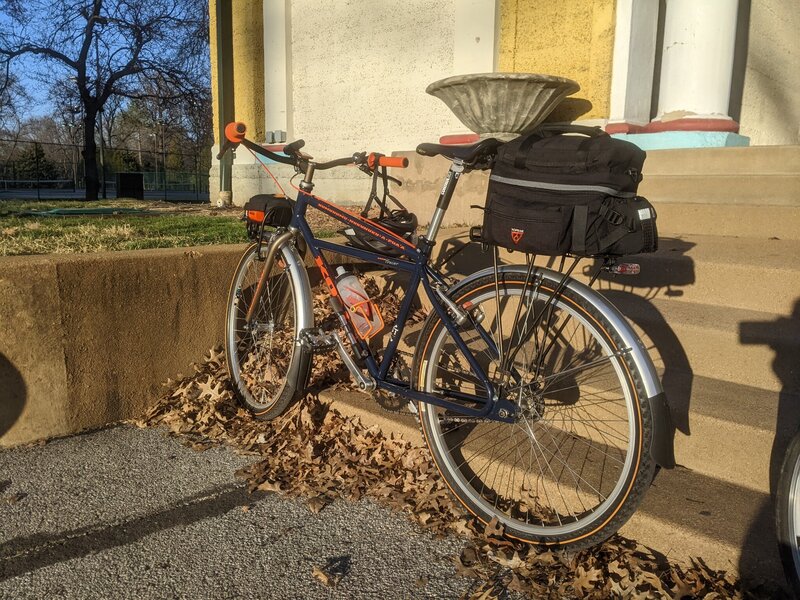 Close up shot of my fave tires, the Maxxis WormDrive. I eventually want to fit a Major Jake or Jake the Snake with a 700c set of these that I have stashed away. Some day... 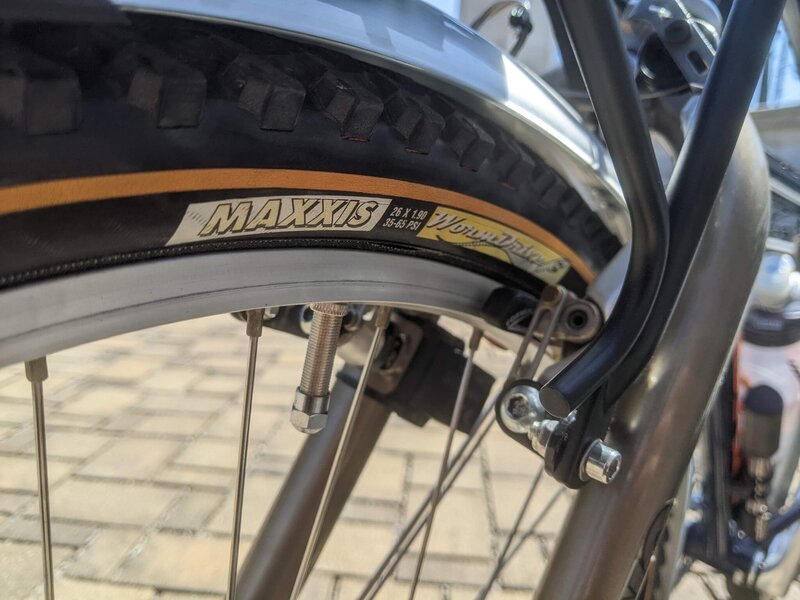 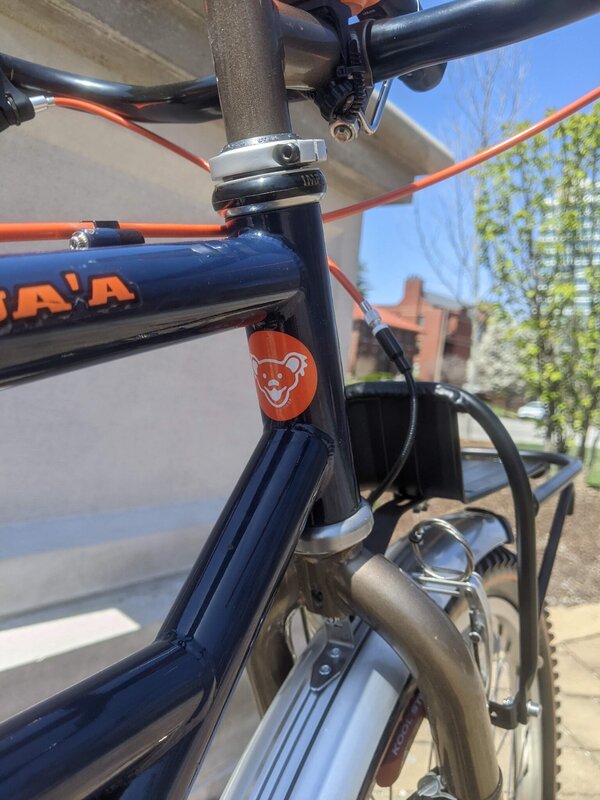 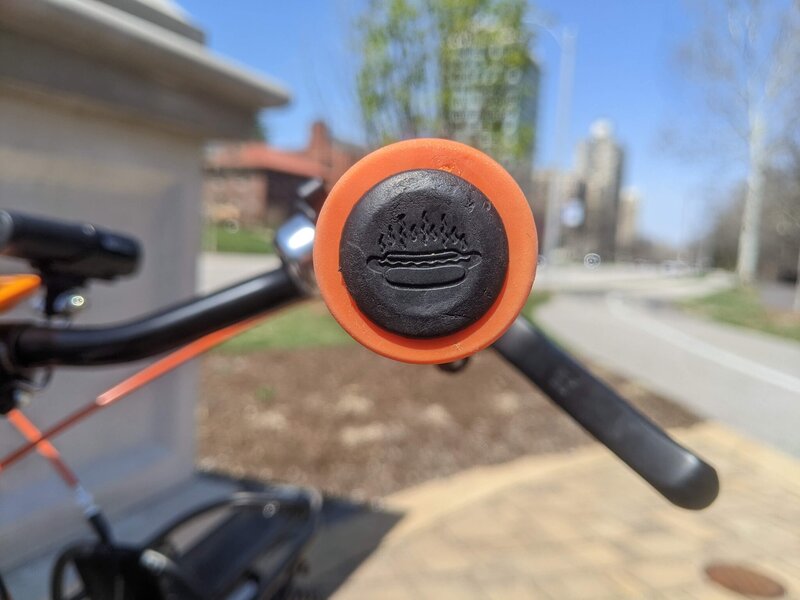 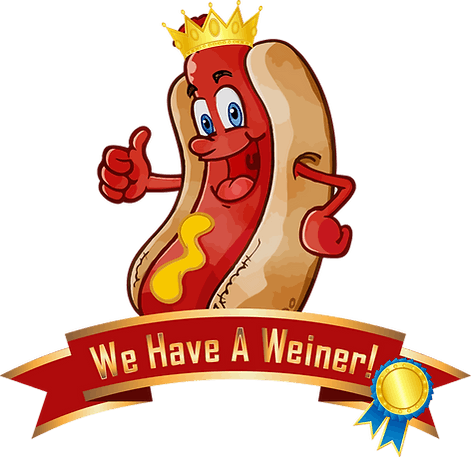