Please note that this is very much a work in progress, so don't expect too much... yet... This is a 'potter along and enjoy it' build, whereas my Zaskar was a 'I need to ride again' build.

Anyway. So, first off, here's what she was like back in the day. Note the original (horrible) suspension forks that had about an inch of travel and snapped under the crown (both legs together) while riding, about six months after buying the thing new. Hence the later shots have Mag 21s, that eventually migrated to my Zaskar (in fact, if you check the pics on the Zaskar thread you'll see that the large majority of the parts migrated frames).

Note that the wheels in the 'current' pictures are off the Zaskar and aren't staying (just wanted to sit on the thing again after all these years!) Seat clamp Q/R also isn't staying. Undecided on the rear mech; might keep the LX as that's what I always used to ride (with an XT up front). Large majority of the finishing gear is original - bars, stem, grips, etc. Am also planning on digging out the original pedals and toe straps in the near future (although think I totalled one toe strap in the crash). Alivio cranks are going though - need the LX of the same era again (still have my originals, but on the wife's bike now and daren't nab them back )

Also going to stay with Onza HO up front and cantis on the back, for two reasons: 1) that's what I used to ride it like (could never afford the full set) and 2) I've heard 'orrible stories about HOs cracking under heavy braking and fancy a reliable set of stoppers on at least one end of the bike.

By the way... I know a lot of these are race pictures... but I was never actually any good. Just the only time anyone was around to take pictures of me.

Nice. Looks similar to my kili. 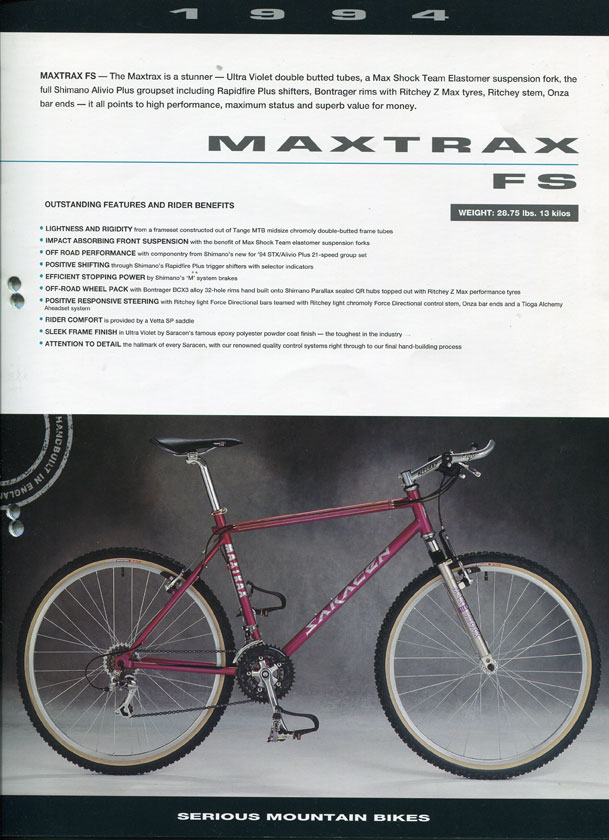 Thanks. Helps with my fading memory although fairly mine sure came with the Ritchey saddle on it now rather than that fancy flite wannabe.

Think I used to have a catalgoue just like that somewhere but no-idea where it is now - was good to see it again, so thanks.

Always loved this era Saracen purple though - one of the main reasons I bought the bike BITD.
You must log in or register to reply here.