I just got a 1994 Marin Eldridge Grade from a friend's family's basement. It was clearly ridden a fair bit, some parts have been replaced (upgraded seat and handlebars, commuter tires). But I'm not certain if it is supposed to be 7 or 8 speeds on the rear cassette.

The current drivetrain and shifters seem to conflict and may not be original (or I'm missing something). Current setup:
Cassette: 8 speed Shimano.
Rear hub: Shimano FH-M565 which is for an 8 speed
Shifters: Shimano LX ST-M563 seem to be 7 speed - they only shift to 7 positions (6 clicks) even after cleaning (per RJ the Bike Guy's video). The shifter "window" is missing so I don't know if it showed 7 or 8 positions. I opened it up during cleaning and find only 7 detents in the shift plate (the bit the pawls click into to keep their position as you shift). Looks like the 8 speed version was ST-M565 but I have M563 which I think is a 7 speed version. Bicyclebluebook lists it specs as 3 x 8,

Plan:
Getting it ready to ride depends on whether the hub will take a 11 speed cassette (which is why I want to know if it is a 7 or 8 speed originally). I'll put on new cables, housing, tires and tubes (after at least 15 years sitting in a basement), then:
I'll probably give up on the original shifter and convert to 1x11:
* Sensah CRX shifter,
* Sensah SRX derailleur,
* KMC 11 speed chain,
* Cheap 38t crankset,
* Sunrace 11 speed 11-46t cassette,
* Tektro canti pull brake levers … or grind the shifter bit off the original rear brake (and convert the front brake into a bell holder).
Overall conversion cost is $100 for the crankset, shifter, derailleur and a 11 speed chain. Cassette (could sell for $50) and Tektro brake levers (paid $10) from my parts bin.

Bike as I received it: 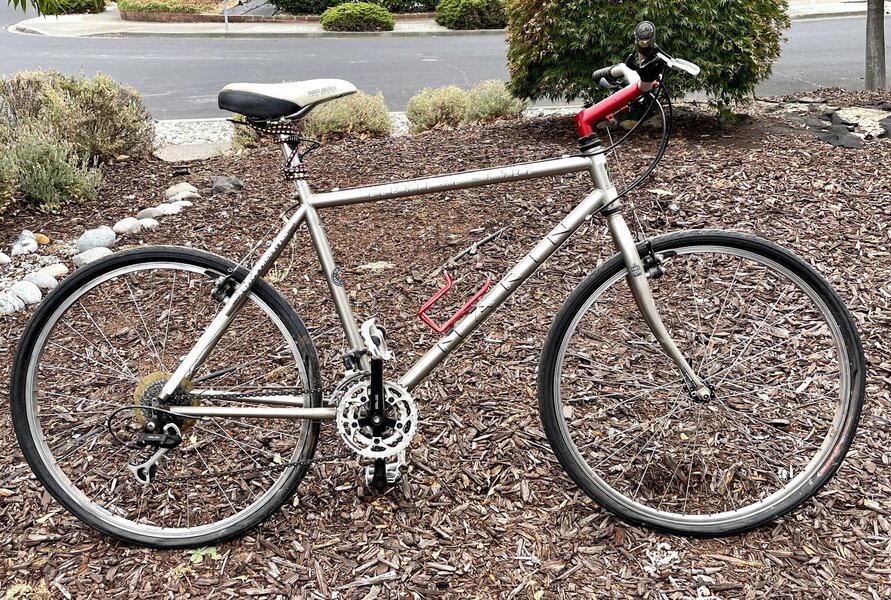 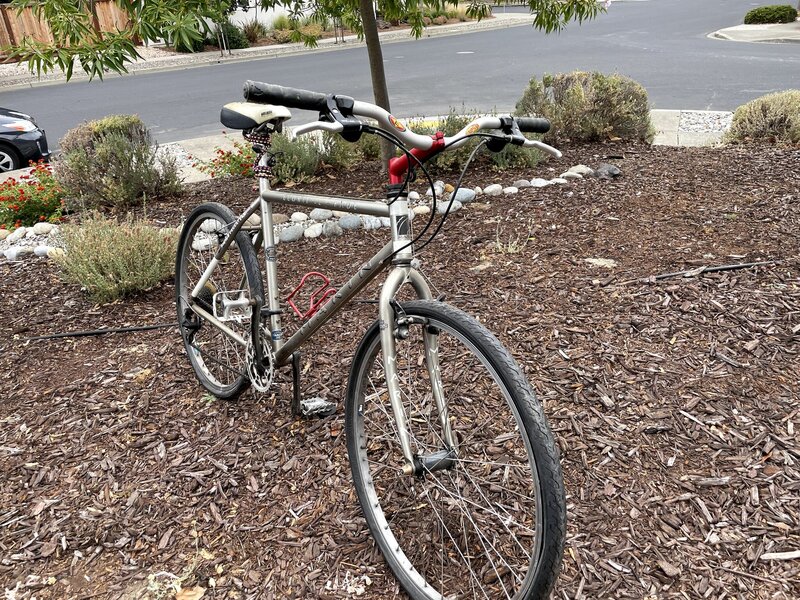 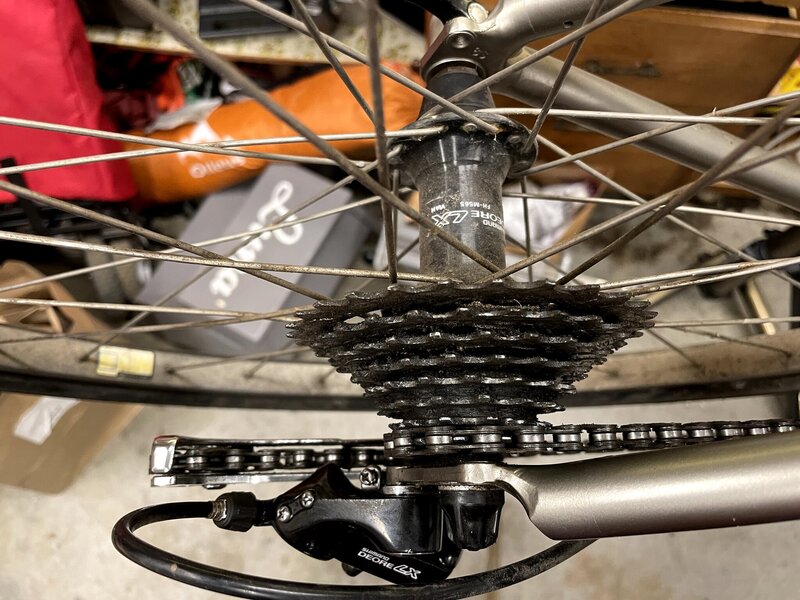 Shifter guts (ST-M563) - cleaned with WD40, some parktool grease (since removed) then tri-flo for lube. The spring over the short and wide pawl had fallen off which was the main problem with the shifter not working, shown here back in place: 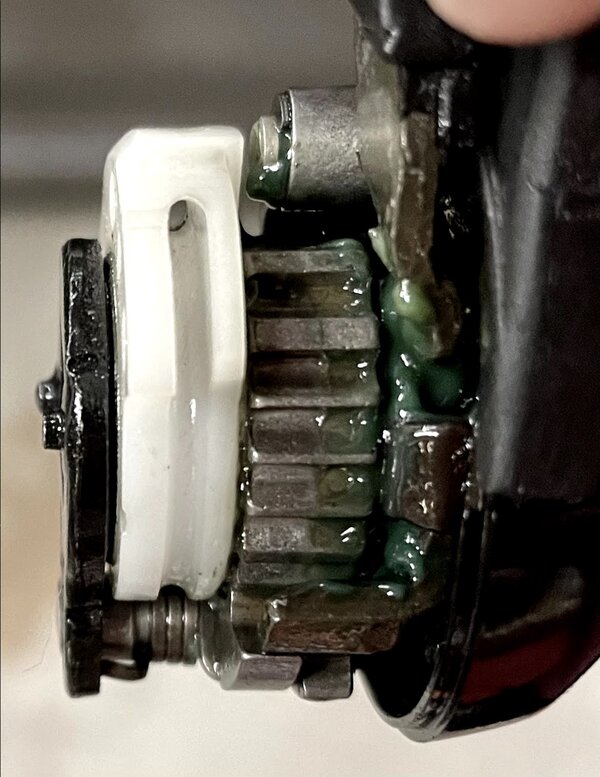 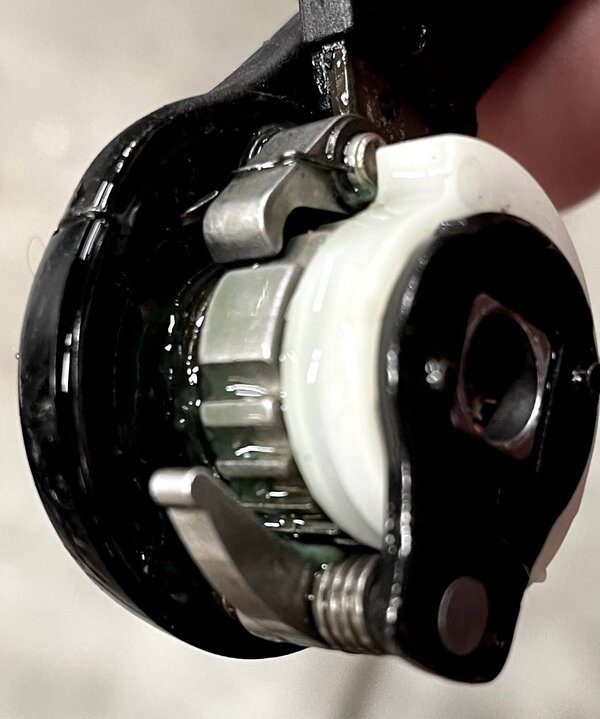 Well, the shifters are 7 speed:

Thanks, it’s nice to know I wasn’t crazy (at least about this) and the repair worked but it’s not the right shifter for the cassette.
I can’t imagine why someone would have mixed these 7 and 8 speed components so similar but not quite right. The rear hub is certainly for 8 speed (FH-M565) and had an 8 speed cassette. Bonkers.

I went ahead and ordered the Sensah replacement drivetrain and shifter.
Tonight I:
Trued the rear wheel
Removed the current crankset and BB (UN-51 in 68x107mm size - I’ll will see if it’ll work with a 68x110mm I have around),
Removed front and rear derailers, and cassette.
Next I’ll:
Remove the brake/shifter levers and replace with Tektro long or short pull levers (they work for both pulls if you put the cable end in a different position)
Find some replacement tires (Billy Bonkers or Fat Frank’s or Big Apples, something 26 x 2.0-2.4”)
Replace the canti brake pads.
Then it’ll be ready for the new drivetrain and should be a nice ride!
You must log in or register to reply here.

M
For Sale 1995 Marin Eldridge Grade 19” - most of a bike there, great Spring project for the taller gent :)