Lo and behold, I lost another bike to thieves during the early ‘90s , my Marin Indian Fire Trail as recreated here viewtopic.php?f=6&t=388648. But that loss of course meant a gap had to be filled...

In early ‘93, a local bike shop in Maidenhead was putting together a team, and a few mates and I had managed to convince the owner that we should be a part of it. We’d been racing more and more, and were getting pretty good, now racing our Mountain Bikes at a national level in both Youth and Junior categories, so supplementing our habit with bikes/frames/parts, and draping us in the shops garish colours and logos didn’t represent too much of a risk for the owner. Team FAT Tracks was born! 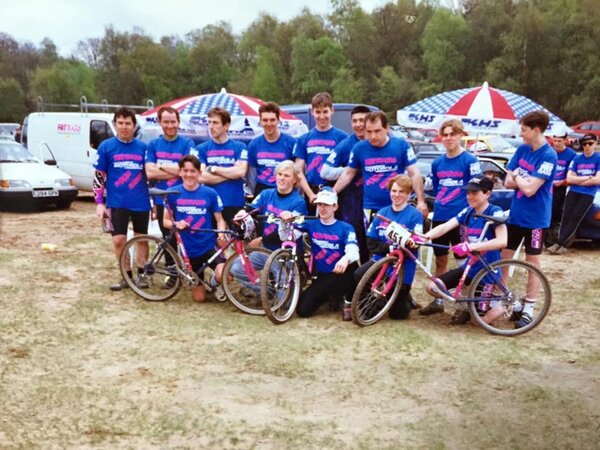 Team colours were blue and pink in support of the main bike brand being sold by the shop at the time - KHS. Besides, this was the early 90’s after all so bright colours were all the rage!

I had some decent results behind me plus following the loss of my Marin I needed a new bike, so I was handed a brand new £1300 KHS Montana Team to compete on, on a use now pay later kind of basis! Full XTR and a great steel frame! I couldn’t have been happier! 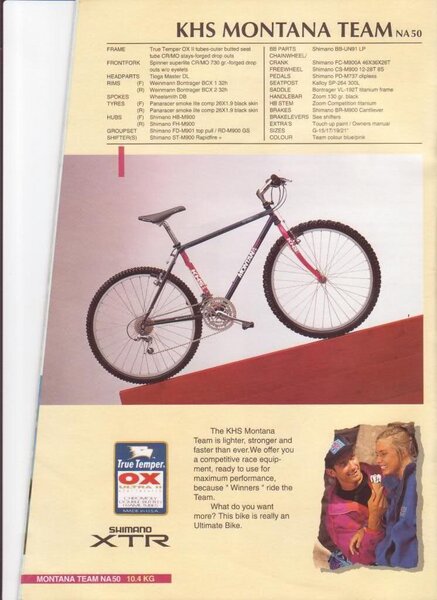 Although the team had existed since late ‘92 the team grew and started out in a bit of a rush at the beginning of the ‘93 season, and for a handful of races we were racing in branded T-shirts rather than proper cycling tops, but as the year went on we got more kit;
• Branded BEANBAG jerseys & shorts
• Branded Camelbak covers
• Branded hats
• Car stickers galore and even flags and gazebos for the car parks/camp sites
We looked as professional as any other shop based team out there. 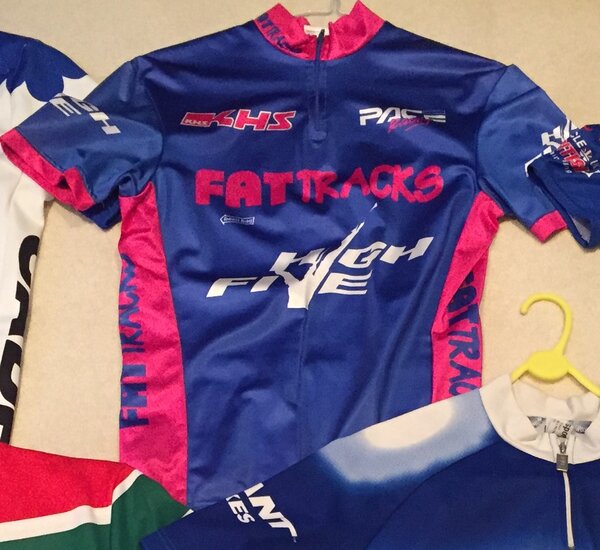 My first memory of racing the bike was at the first national race of the year, where I managed to put in a last minute dash for the line to take the win, but ultimately had to settle for 2nd place. Bizarrely I can still remember the feel of the concrete tracks beneath the tyres from that race on that bike... 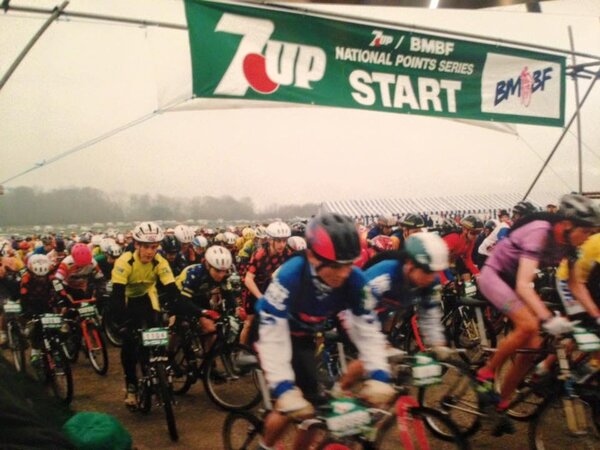 Pretty chuffed with the result as it was quite unexpected (certainly took the winner by surprise! ), and it was clear that the KHS and I worked well together. I don’t remember much more about the national series season, or whether I did all the races (as I could only do those that funds (and by that I mean parents funds!) permitted). I wasn’t at the top of the age group, so unless I performed well I was likely beaten by ‘bigger boys’ , however I managed to finish the series in 5th overall, which is not bad considering race reports in MBUK suggest 2nd in Rd 1 , 3rd in Rd 2 , but not a publish worthy position in Rds 3, 4 & 5

What I do recall however was that when the National Championships came around that year - held at The Malverns site no less, I found myself in a fortunate position when it came to the rules...
It turned out that to be eligible to race in the Youth (Under 16s) category, you couldn’t be any older than 15 by a certain date in the year - mid way through the year apparently, and what that meant was that pretty much all of the ‘bigger boys’ were ruled out and had to move up to Junior...
This meant that I was elevated much closer to the top of the field, with most of those leading the series moved to the next class up. I may even have been the effective top ranking rider in the field as a result. Game on!

Me, my folks and my mates and their folks spent the week at the Malverns before the event as a sort of holiday, seeing as it was August school holidays and all. This helped us get used to the place, and we enjoyed messing about before the course was set out, then got some practice in when it was set up. 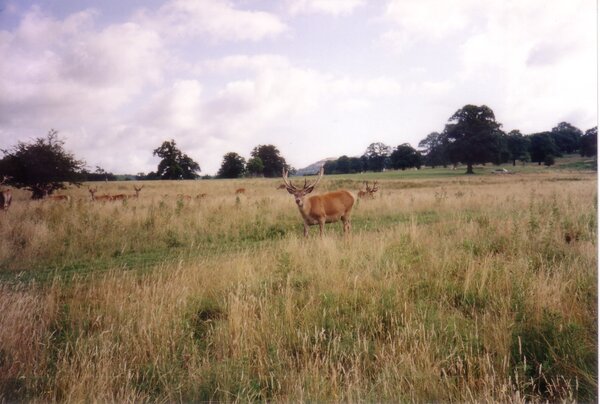 Race day in August 1993 was epic, hundreds of riders, thousands of spectators (maybe?) - a great atmosphere!

Despite getting a bit tangled up at the start, by the time we entered the muddy woods section I’d taken the lead, and I didn’t look back! I gave it everything I had - to the point of throwing up on the final downhill!, and must have had a crash at some point judging by pics from the race of a bloodied knee, but I came home with the win! National Champion!

Here’s me and the bike in race trim, with RC35s, Umma Gumma tyres, X-Lite bar ends Specialized saddle bag. I still have most of what you see in this pic... 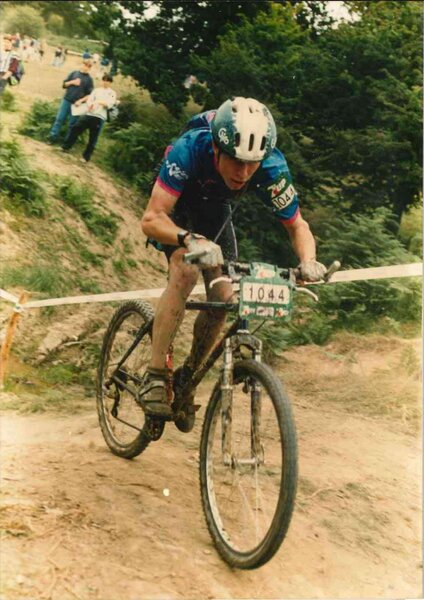 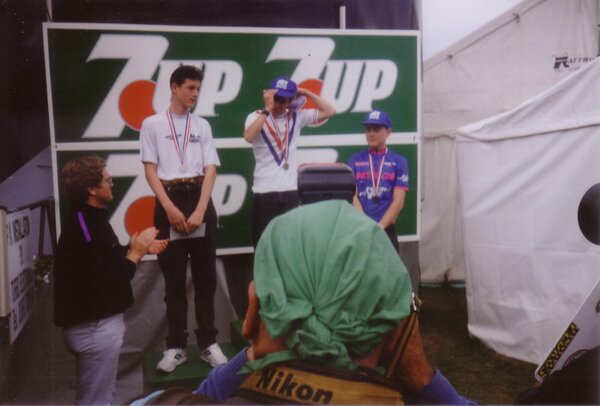 I’m the skinny one in the middle , and that’s Elliot Baxter (L) and my team mate James Allaway (R) either side of me.

Back to the bike....it was faultless then and it has been with me ever since. The bike became mine on the back of the years use (discounted price paid to the team manager by my folks).

As time moves on so do bikes, so the KHS was retired from regular race duty by the next years bikes. But it became a donor when needed, giving up the majority of its parts over the years - but never being sold on. It saw occasional race duty when I was between sponsors, racing out of season or waiting for the next bike to arrive. In 1995 most of its group set went down the mountain attached to my Giant Cadex at the World Downhill Championship in Germany!

The KHS still gets used to this day, but only for very light use. For a long period of time it was a mix of parts just assembled to keep it running, but some original parts remain even after all these years. 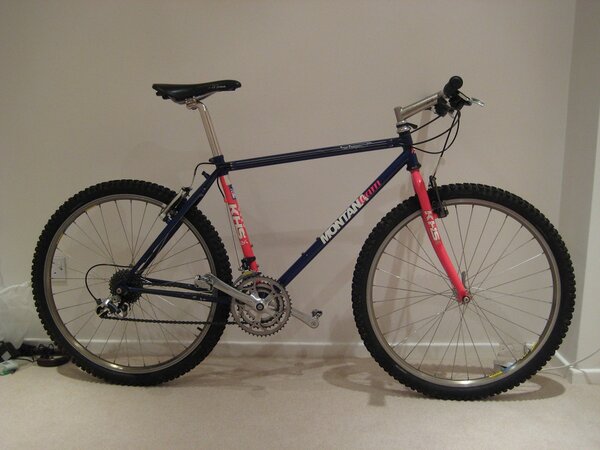 It’s always been on my mind that the KHS was in need of some TLC, so I figured the right thing to do at least was to remove any parts that don’t belong, and replace with factory spec if possible. Then I decided to commit to a full factory rebuild (or as close to it as I could ascertain from spec information available).

The remaining original parts I had to start with were:
• Frame & Forks
• Seatpost
• Cranks
• Hubs
Everything else has been worn out, binned or maybe sold over the years (most likely worn out!).

Parts were sourced and a full strip down took place. 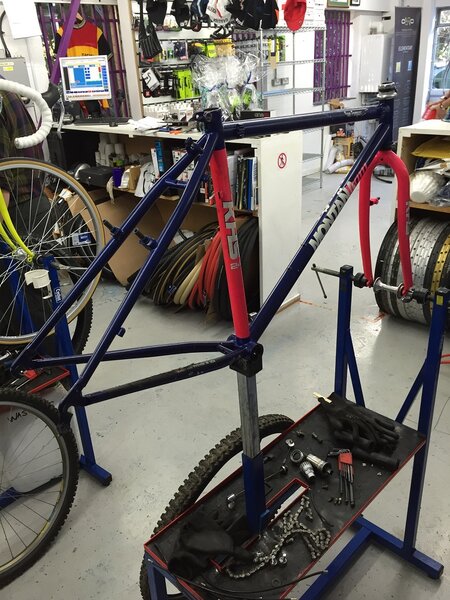 Patina has been retained with original paint throughout, and I’m pleased to report very little fading of the pink as it’s not sat outside in the sun more than necessary. 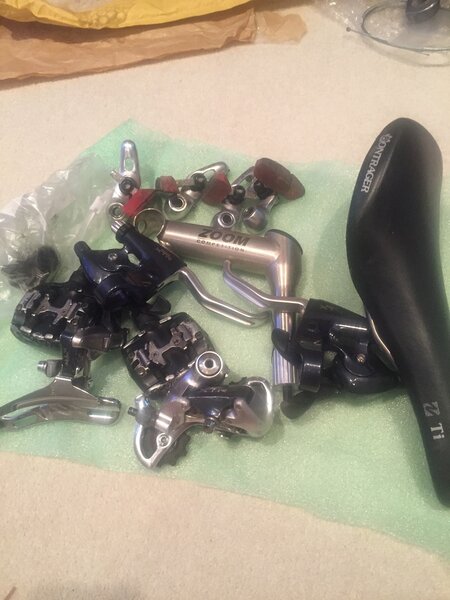 Nonetheless all parts were tracked down in the end, those above being the hardest to find as expected, the rims coming from the States - one NOS :shock: , the saddle an absolute bargain on eBay, the bars via Retrobike as someone was breaking a bike up, and the headset appeared like a beacon on a bike jumble table at Icon-o-classic - which was the icing on the cake of my brief visit to look at other people’s gorgeous old bikes!

New wheels have been built using the bikes original hubs - they are heavily worn but are soldiering on. Similarly I’ve stuck with the original cranks - but the lacquer is breaking up so they look pretty ugly. If this was going to be a garage queen I’d consider finding some in better condition, but the bike gets ridden so there seems little point in the expense.

No courtesy car available? No problem 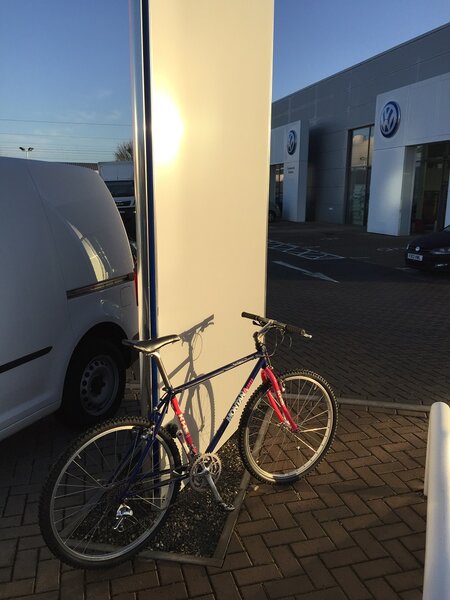 Pulling the bike back together has been a labour of love, and if anything wasn’t quite as I wanted it then I waited until it was. The tyres for instance - the brochure says they should be black wall Smoke Lite Compes front and rear, and when I realised I’d only found a pair of regular black wall Smokes it bothered me so I kept up the search for a pair of Compes - and found some... 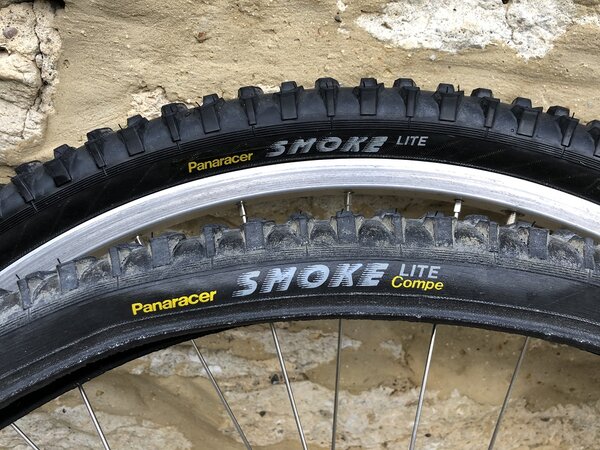 I do still have a nagging feeling about the stem - the hole in the front of the clamp is off centre and it bugs me! :| 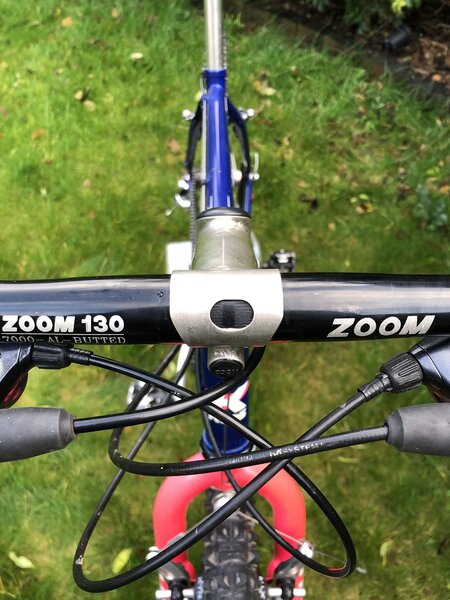 I also have a set of RC-35s set aside in need of a refurb, and I’d like to fit them at some point to replicate the Championship winning spec...

One job to do next time I service it is to change all the cable outers for grey XTR type (got plenty so not sure why I haven’t I done it yet).
Last edited: May 4, 2021

So here she is, my forever bike . I think I may actually have to be buried with this one... 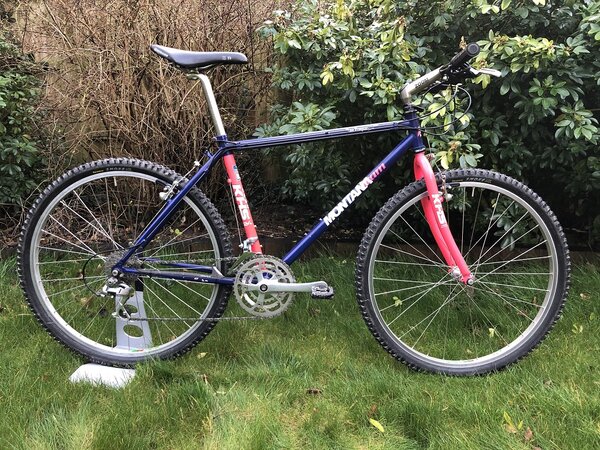 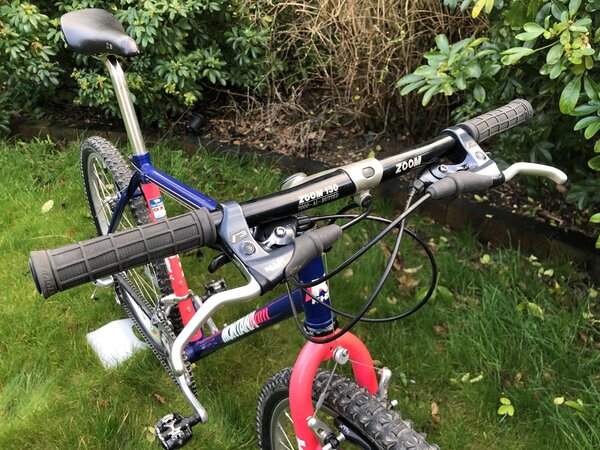 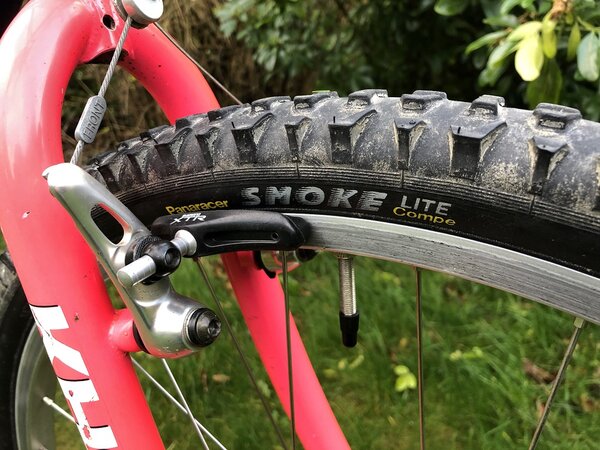 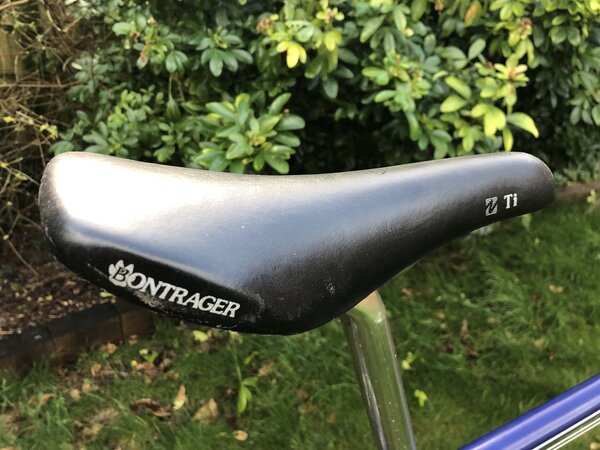 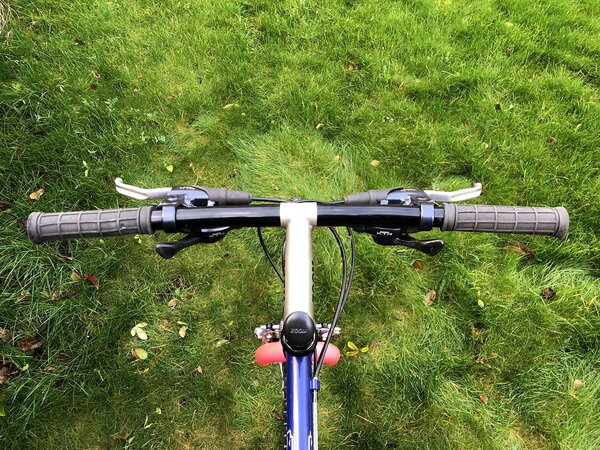 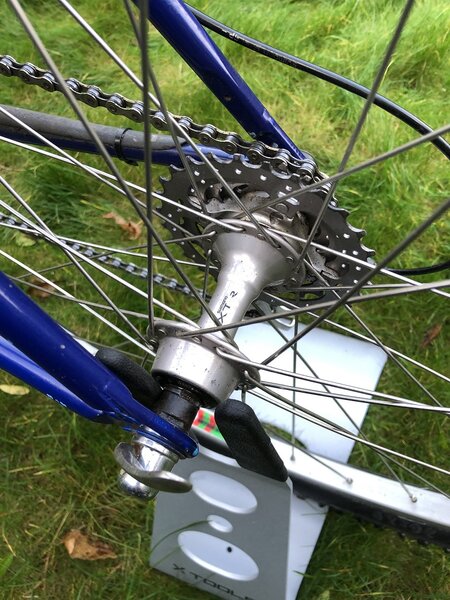 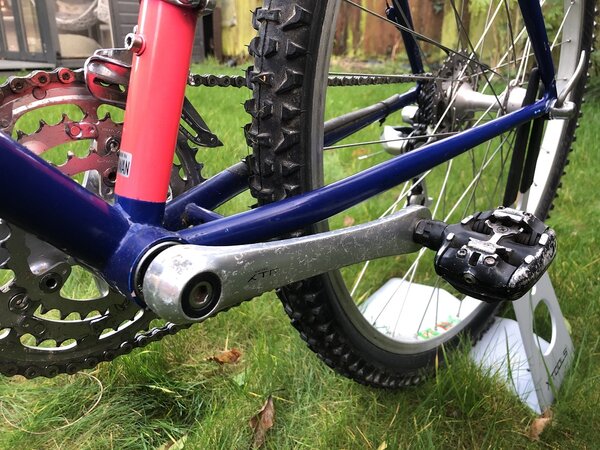 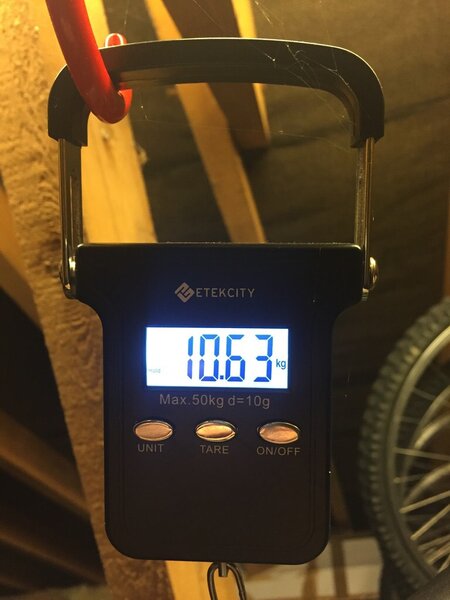 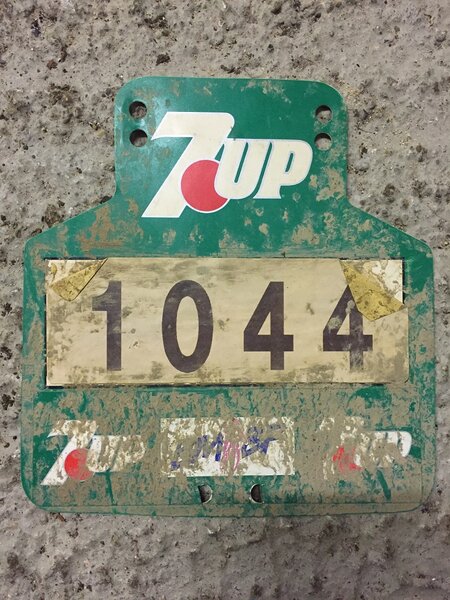 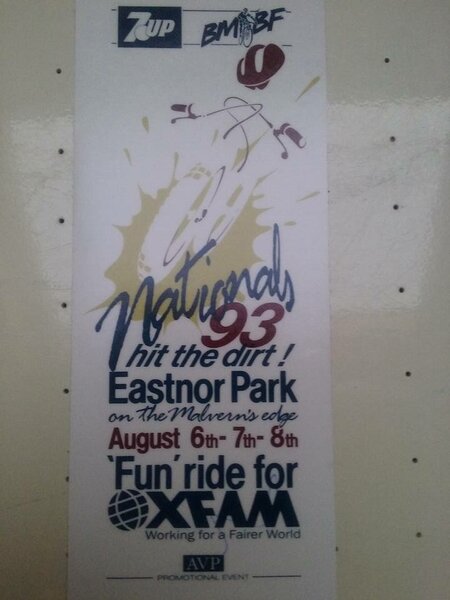 Oh and if the parts start to disintegrate further, then I’m prepared with a spare groupset :shock: 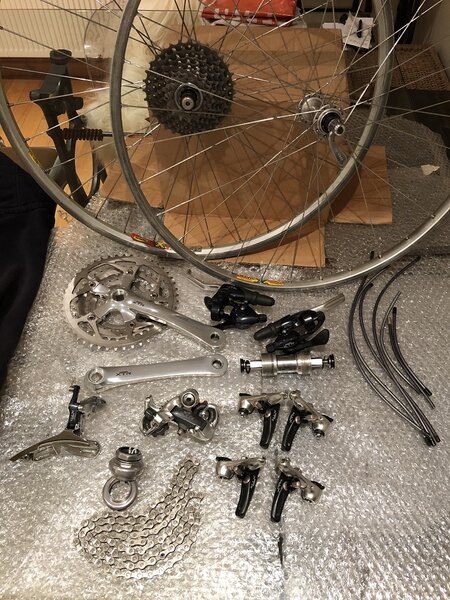 Super cool, always had a soft spot the these. It would be great to see it in race winning trim with the RC35’s as well.

I can see where you’re coming from with the stem though... how did they get that cutout so off centre :shock:

Top marks for the parts harvesting by the way. Special mention for the bontrager grips though - they’re hens teeth to source it seems


mynchiboy":517uaf1f said:
Super cool, always had a soft spot the these. It would be great to see it in race winning trim with the RC35’s as well.

I can see where you’re coming from with the stem though... how did they get that cutout so off centre :shock:

Top marks for the parts harvesting by the way. Special mention for the bontrager grips though - they’re hens teeth to source it seems
Click to expand...

Funnily enough I didn’t have to source the grips as they’ve been fitted for years. But if I had needed to find new ones, they are the one part that remains a mystery on the catalogue spec as not mentioned :?:

Great thread this one and the pink/blue KHS was always super cool.

Orange 🍊 Fan
What a brilliant thread. Great looking bike, and Kit. Reminds me a bit of the Italian Lampre team kit. Anyway fair play, top cyclist in your day, with lots of great memories am sure. Thanks for sharing!

Cheshire1980":2uht86yt said:
What a brilliant thread. Great looking bike, and Kit. Reminds me a bit of the Italian Lampre team kit. Anyway fair play, top cyclist in your day, with lots of great memories am sure. Thanks for sharing!
Click to expand...

Cheers Calum!
And thanks to you and boy"O"boy for the MBUKs that have helped in filling in some of the race result history
You must log in or register to reply here.