I finally got my Tioga-hubbed wheel built for this build then realised I still hadn't started a thread for it, so here goes: 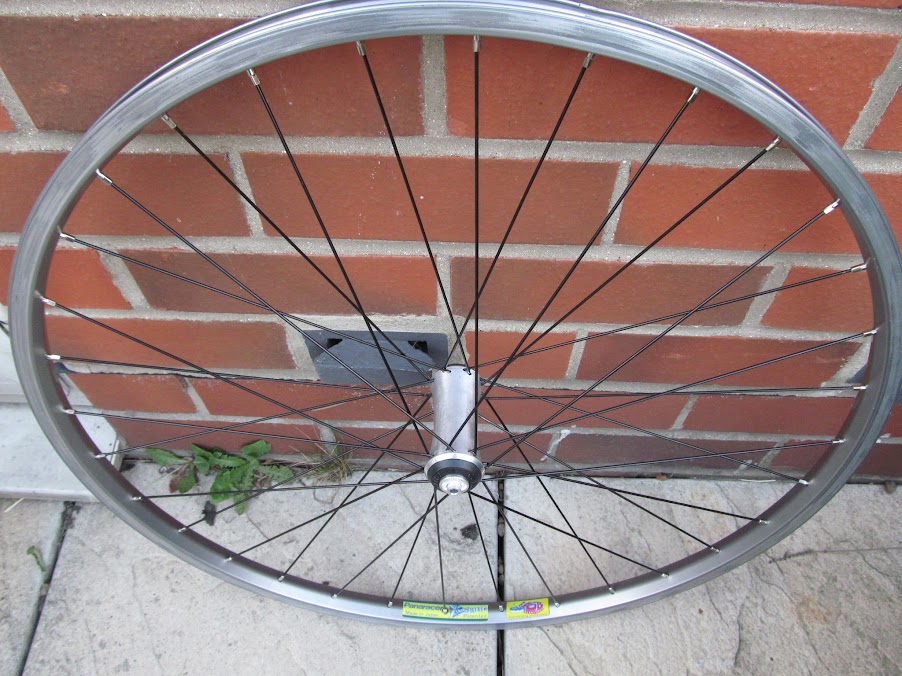 The hub was kindly karma'd to me by Bart (stumpjumper1990). The slight difficulty with these hubs is that they take 15G straight-pull spokes. After a fair bit of hunting, I did manage to find some though and having calculated the length to the best of my ability I ordered some 266mm spokes to lace to the Panaracer rim kindly karma'd to me by Ian (ishaw). Since I was paying postage anyway I got a set of 264mm spokes too - they might come in useful if I ever want to re-lace it in the future.

The idea for the build was to use a mixture of Tioga parts and M73* parts, rather than the XT/LX mix it would have had originally. I was going use black M730/M732 hubbed wheels, but having then seen the Tioga front hub I couldn't resist. Having picked up a silver M732 hub laced on an unknown grey rim, I went with the offer of the Panaracer rim as a reasonably similar colour. 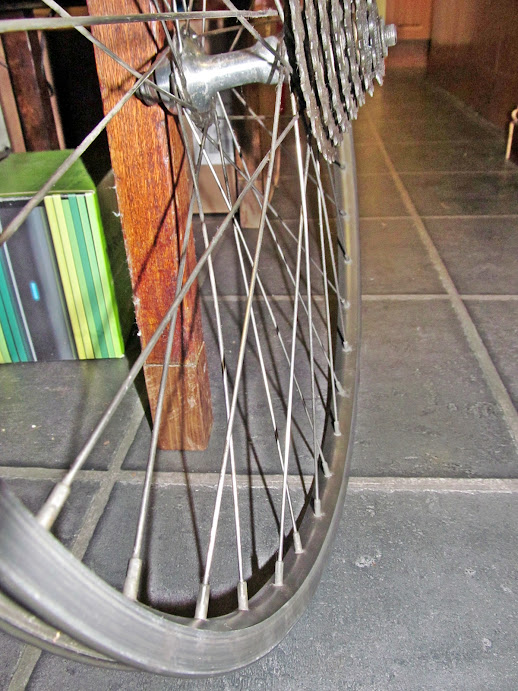 I've had this frame for awhile, having spotted it on ebay, dressed with some horrible parts as well as a few original or not so bad.

[run out of time for now - to be continued!]

Looking forward to more pics of this! I have a '92 Richter.

One of the bikes you never see , looking forward to this one

Thanks, the relative obscurity of this in the GT line-up (only 1992 and 1993 and even then they were quite different) and the use of different tubing in the frame (TT GTX heat-treated top tube and Tange Prestige Concept heat-treated down tube and seat tube apparently - thanks GM) are probably what most attracted me to it.

I should have started with the frame, since that's where it did start. I'll have to have a look through the pictures on my computer and see if I have a photo of how the bike looked when I got it.

It came with some cheap suspension forks, stem and bars, with the original DX Rapidfire Plus on the right and a more modern Shimano rapidfire on the left. The wheelset was some very cheap throwaway efforts. It had it's original M735 front mech, but a M737 rear mech, which was promptly sold on ebay. It does have it's original GT replaceable rear hanger, which was a bonus. The crankset was some horrendous cheap all-in-one steel effort, which looked to be matching but was actually 170mm one side and 165mm the other!

Finally the seat post ..... as soon as I looked closely it was clear something was wrong. After undoing the original seat clamp, the very short seatpost and heavy mattress seat pretty much fell out to leave this: 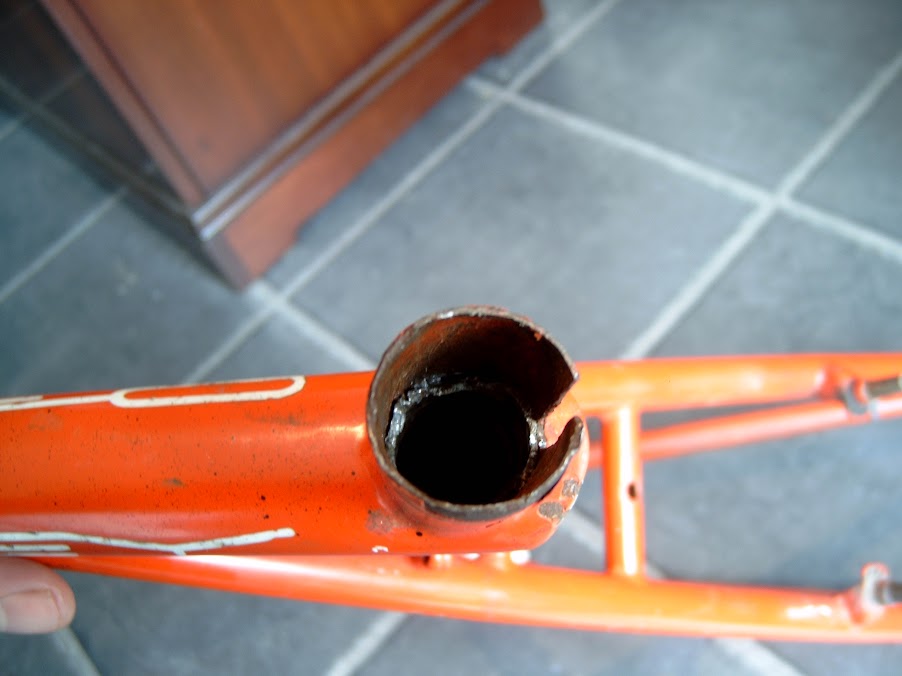 I tried several methods to remove it before resorting to caustic soda:

As you can see in the picture, the paint work was already very shabby. It was hard to tell if it had been repainted in the original colour, or whether it had just been touched up in places (including the obligatory overspill onto the headset cup. This allowed me to be more carefree with the caustic soda, as I knew I'd be having it repainted anyway.

The end result was very impressive - I cleaned out the seat tube afterwards, but there was barely any residue left.

I had decided from the start that I wanted to fit it with rigid forks, mainly because in general I prefer them and although the '93 Richter 8.0 originally came with Rockshox Quadras the geometry was still right for a standard c.395mm fork. Initially, I intended to use some nice straight blade Dawes Geo-max forks that I bought on here (thanks bren, I'm planning their use in a future project) but by this point I'd decided on an ahead stem and headset, so I searched again. Ebay to the rescue, with some bargain straight-blade 1996 Dawes Geo-max forks, which were an option on the Edge that year. They were a lovely custard yellow, but that was alright, because after a long wait, I finally took them to LSN coatings in Castleford to have the frame and forks powdercoated.

Next update will have the pictures of the frame and the forks when I got them home.
X

I wanted a Richter pretty badly BITD, and even after having owned and sold a Xizang, I still think it would be a cool bike to have. Good luck bringing this one back. The caustic soda method is super effective if you have the nerves for it. I saved my '95 Singletrack using it.

I remember you saying that you had a 1992 Richter 8.0, that's the one made of TT GTX, right? I was talking to Chris about them Wednesday, as it was the same frame as the 1992 Karakoram - almost wish I'd kept the '92 Karakoram I had a bit longer, but too many projects.

And will soon be sold.

I finally started building this up today, which reminded me I hadn't put up the pictures from when the frame returned from the powdercoaters yet.

All I did today was tidy up areas of the powdercoat and clear threads, apply some framesaver, install the headset cups and put the "Tange Prestige Concept" decal on the seat tube.

This was the frame and forks as they returned from the powercoaters: 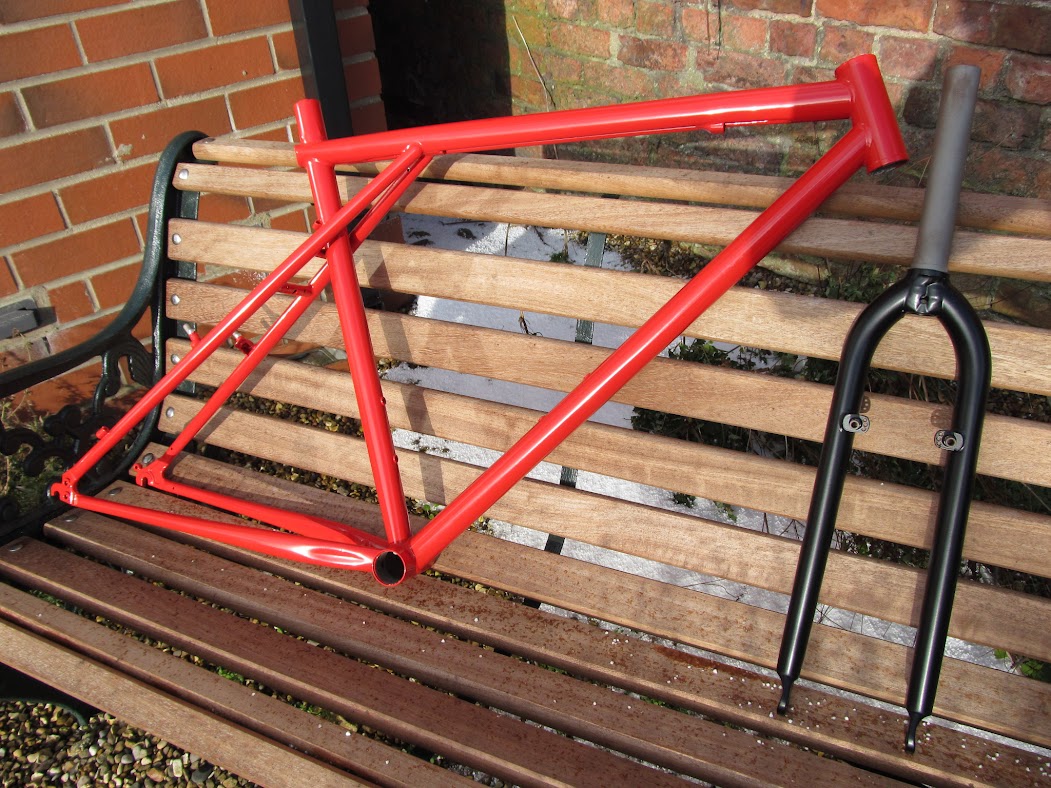 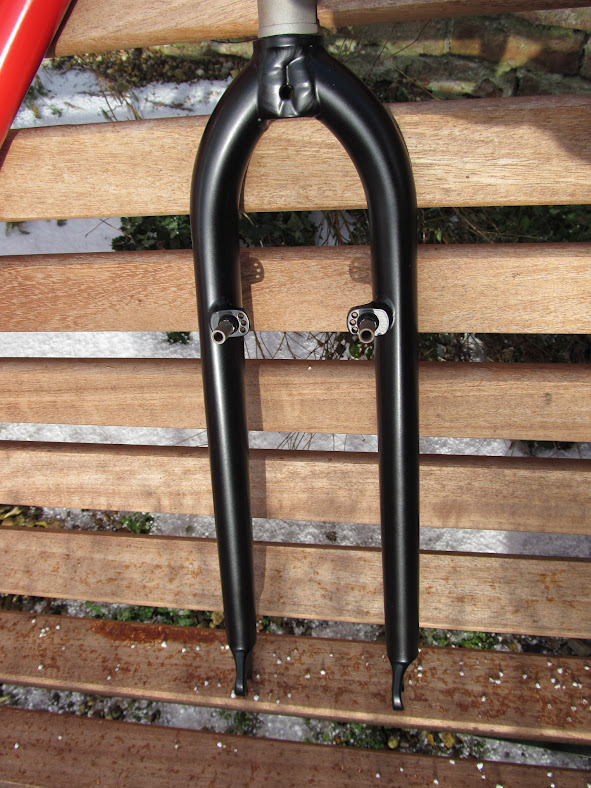 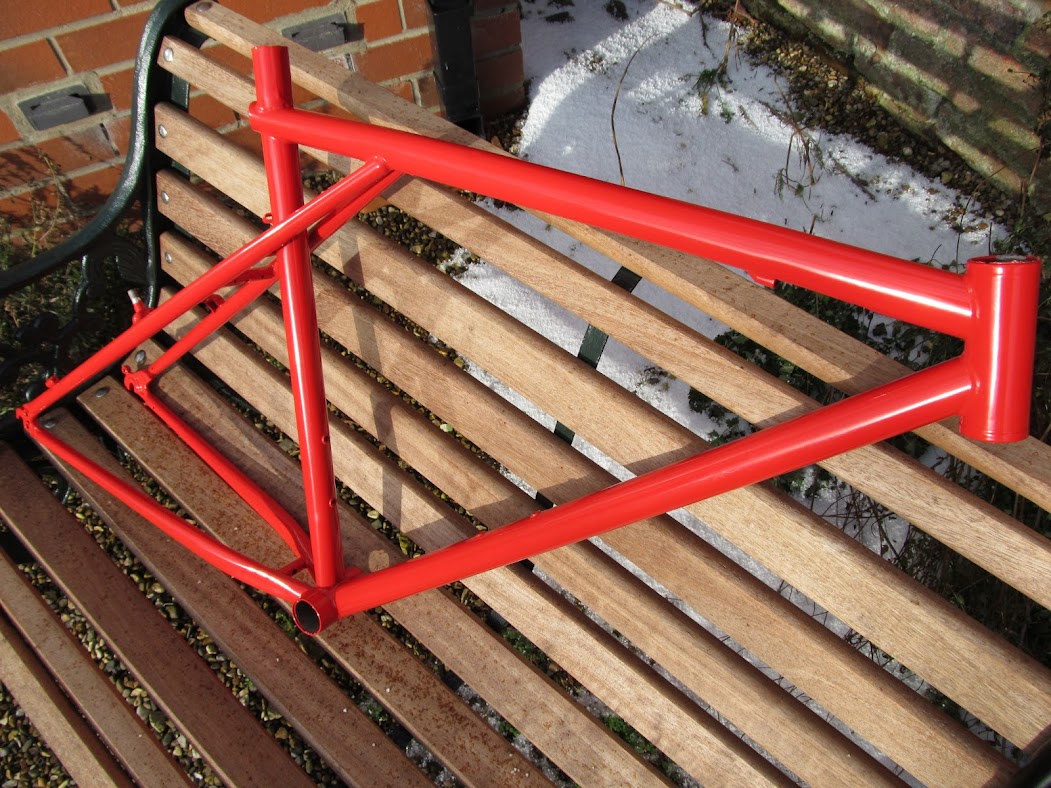 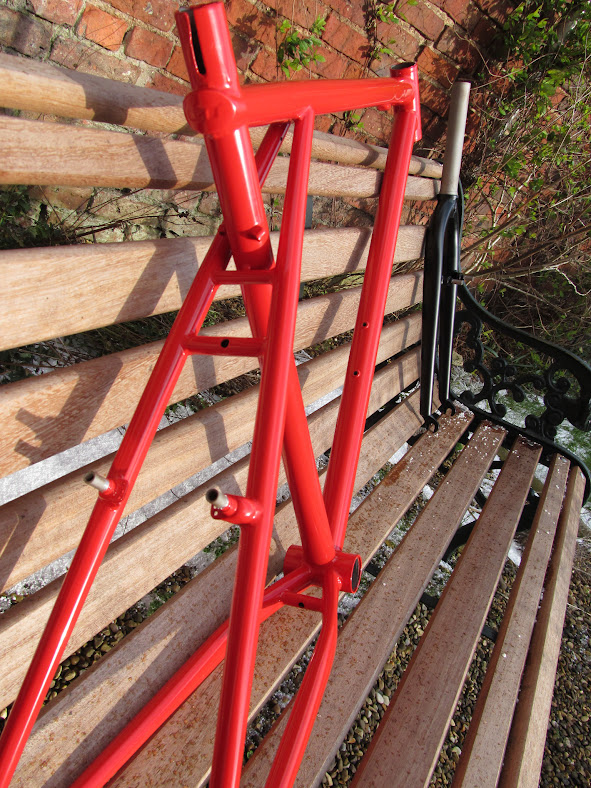 I'm really happy with the colour, it seems very close to the original 'Ferrari Red'. I forgot to take any comparison colours with me when I took the frame, but I seem to have chosen correctly. It was a bargain price and the masking was pretty good, though I had to clear the threads a little and wire wool a couple of edges.

The only real disappointment was that it returned with a small ding in the top tube. 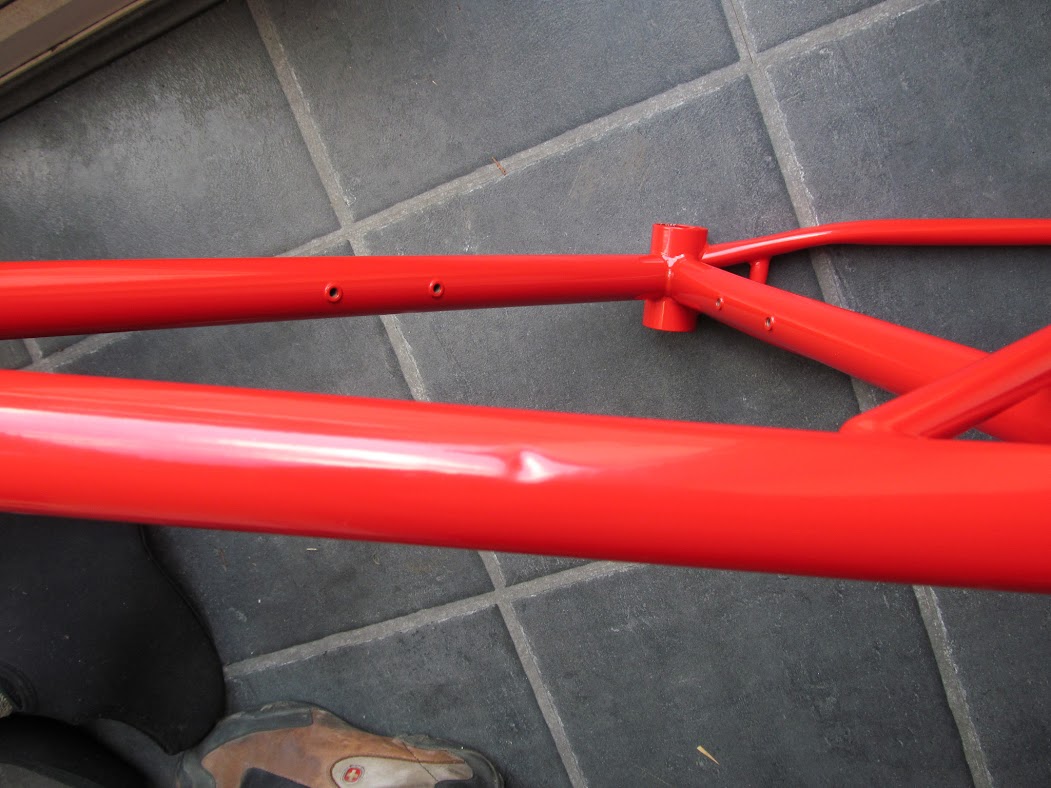 I was really gutted about that at first, but I've got over it now.

Another picture will follow when the frame and forks are together.
You must log in or register to reply here.

For Sale Few bits from the shed