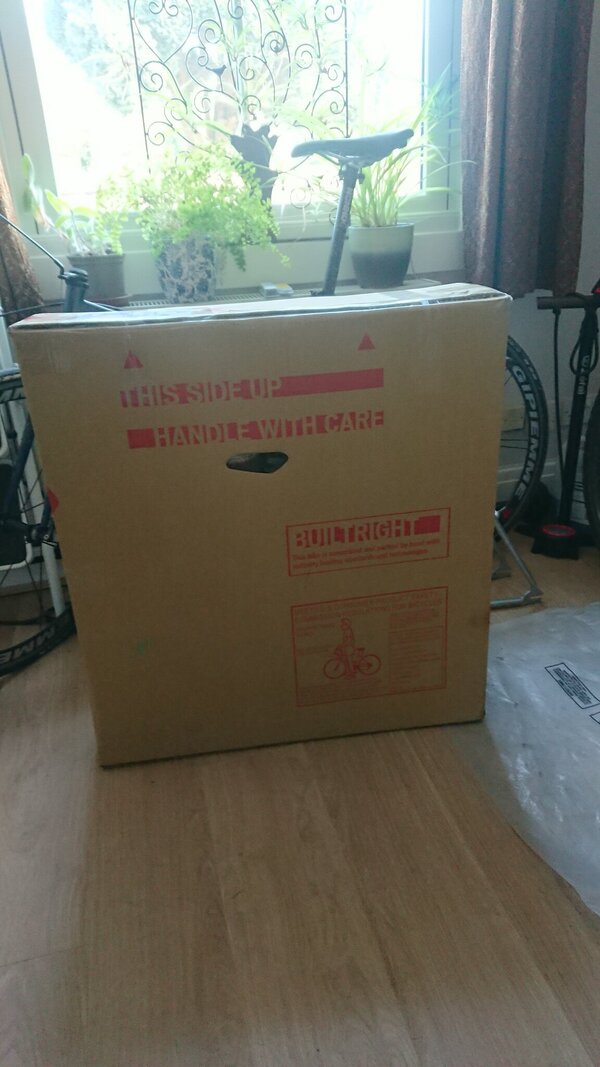 In theory, this was meant to be a quick build that I could later upgrade as necessary, but it's already taking a lot longer than planned.

I bought this unfinished project from Captain Stupido. I did originally consider stripping and polishing the frame to keep costs down, but realised it would take too long. The frame, forks and stem have therefore gone to Yorvik Engineering for powdercoating. Unfortunately, Prismatic Powders have sold out of the colour I had set my heart on and say it will be about 2 months before they make a new batch:


Therefore, I have asked them to use HMG's Latent Rose Gold instead - I looked at a smaple of this last time I went to Yorvik and it does seem fairly pink, like this picture, not too gold as some of them are: 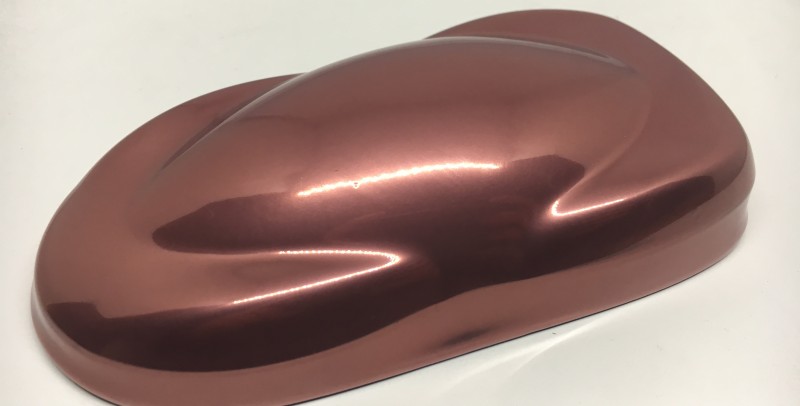 I now need to plan the build so I can complete it the same day the frame is finished. Therefore, here's a spec list, as much for my own planning as anything else:

Headset: YST Evolution 1 1/4"
Stem: Zoom (original)
Handlebar: Ritchey Forcelight 170 (silver)
Grips: Tioga
Barends: I have some RSP or Marin Lite I could use .... I haven't decided whether they are necessary.

The package came with a lot of the original parts. Really, I want to replace a lot of them to make this as light as possible, but for time and cost reasons I will try to use as much as possible, with the possibility of upgrading parts ater. The original bar was very heavy steel, despite having been cut very short, so I replaced it with the Ritchey bar for £5. I have skewers, but this may well be left outside shops, so I have ordered some Halo non-QR skewers to make the wheels slightly less attractive to opportunist thieves. There was no bottom bracket, but I am also rebuilding my Sbike, so I have Altus spares from that - I guess the BB in that is an Altus A10 one. I decided against getting the original wheels, since the front needed rebuilding on a new hub and it would have increased the shipping price. Instead, I bought some nice STX RC/Mavic X221 wheels (thank you to @dandy1 ) which I've trued, serviced the hubs, and have cleaned up nicely. Someone gave me some self-sealing innertubes, which I don't really like, but might be useful for a bike I won't be there to fix punctures on all the time.

The remaining choices to be made are the drivetrain and tyres.

I'd like to change the drivetrain from 3x7 to 1x8, for both simplicity and to loose a little weight. Using a wide-range cassette, that would give enough gearing. However, I would then need to find replacement brake levers - I do have a nice STX RC 8 speed shifter though and although the Altus A20 crank has fixed chainrings, I have a spare Altus A10 I could use with a single ring. I think for now, I'll have to build it 3x7 (assuming I have a 7 speed cassette and spacer somewhere) with a view to changing it later.

For tyres, I do have quite a lot of ununsed pairs of tyres, but I'm not sure whether any of them are right for this. Ideally, all-purpose tyres would be best as it will mainly be used on raods, but may well be taken off-road on occassion. That rules out all my off-road tyres. I do have some (cream) Geax tyres, but if I remember correctly they are really just a road tyre - they might look good with the colour though. Alternatively, I might buy some WTB All Terrain Comps for it.

For now: check the tyre stash, find a cassette and spacer, and clean up the parts I haven't cleaned yet.
Last edited: Apr 25, 2022

Klein Fan
Do you really want to waste a freshly painted frame with Altus parts? I mean - I'm confused.
Wouldn't it be better to not paint the frame an get some DX or XT parts instead if you're tight on money?

Altus - Those are parts I would suggest to put on a beater bike. One that is used to take it to the train station and not be worried if it gets stolen.

Thias said:
Do you really want to waste a freshly painted frame with Altus parts? I mean - I'm confused.
Wouldn't it be better to not paint the frame an get some DX or XT parts instead if you're tight on money?

Altus - Those are parts I would suggest to put on a beater bike. One that is used to take it to the train station and not be worried if it gets stolen.

No, that is a really good point. If the bike was for me, I would definitely improve the components, make sure I like the ride etc., then finally commit to repainting once everything else is right (my single speed had to wait a long time to be refinished). However, the paint has been stripped in places and the bike is for someone to whom the colour might be at least as important as how it rides. They will also leave the bike places I probably wouldn't leave a bike. Therefore, I'd rather build it up with Altus parts (generally seem to work alright, but I can replace any if necessary) and upgrade parts later if I'm confident they won't be stolen and the bike is being used.

But it still hurts.

I think longer term I'd quite like to build it up with full STX RC - I like the 8 speed shifter and it would match the wheels. Although that could lead to cantilever/brake lever dilemmas .....

FWIW, when I briefly rode it with the Altus parts supplied it all worked very sweetly and actually rode nicely. IMO the Altus STI units are surprisingly solid feeling, and there's not much wrong with the mechs and brakes either... If it was me I'd possibly upgrade the chainset to something a bit better looking (and slightly lighter) but better wheels is the main thing and lighter handlebars certainly won't hurt.

Thias said:
Altus - Those are parts I would suggest to put on a beater bike. One that is used to take it to the train station and not be worried if it gets stolen.
Click to expand...

The Altus kit is no worse than STX, it's just not quite as pretty. 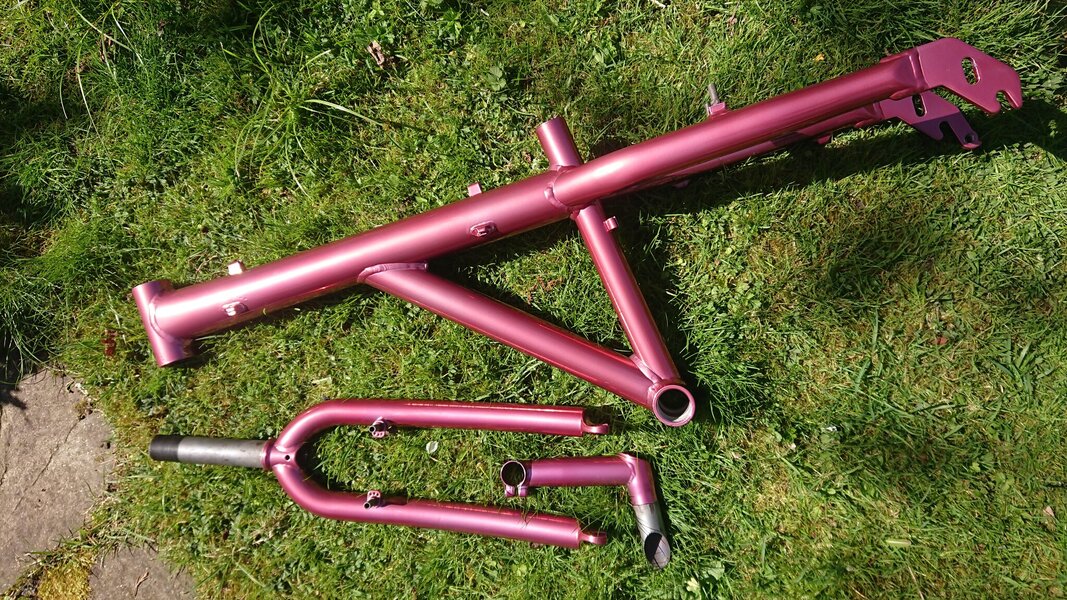 I'll probably leave it at the "rolling chassis" stage for tonight: 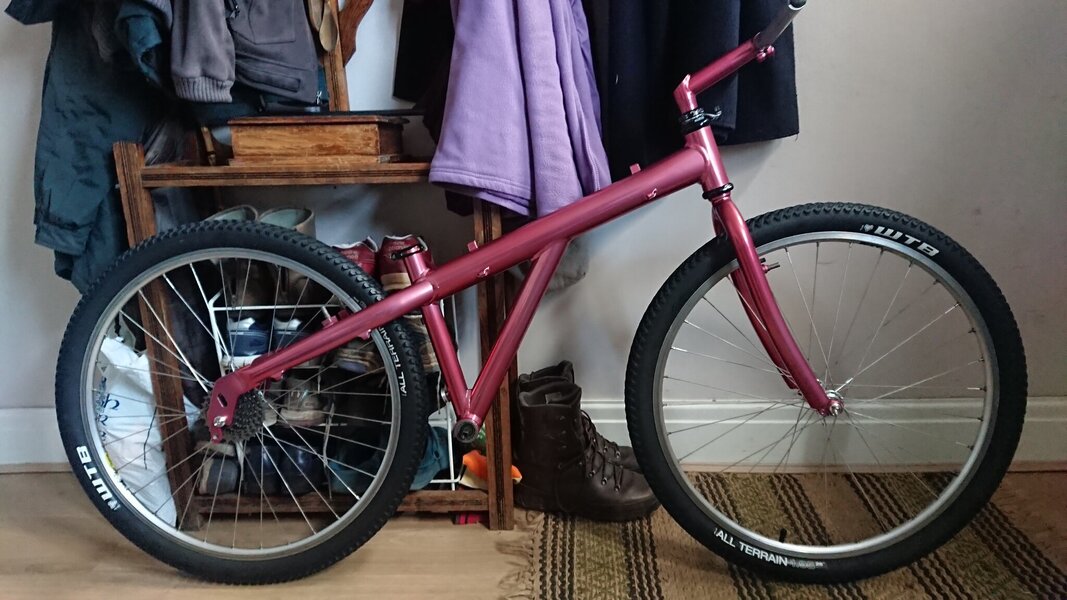