Kona Fan
I bought this bike almost exactly 3 years ago, for only $15, at my regular thrift store.

Here is the bike right before purchase, at the check out counter. 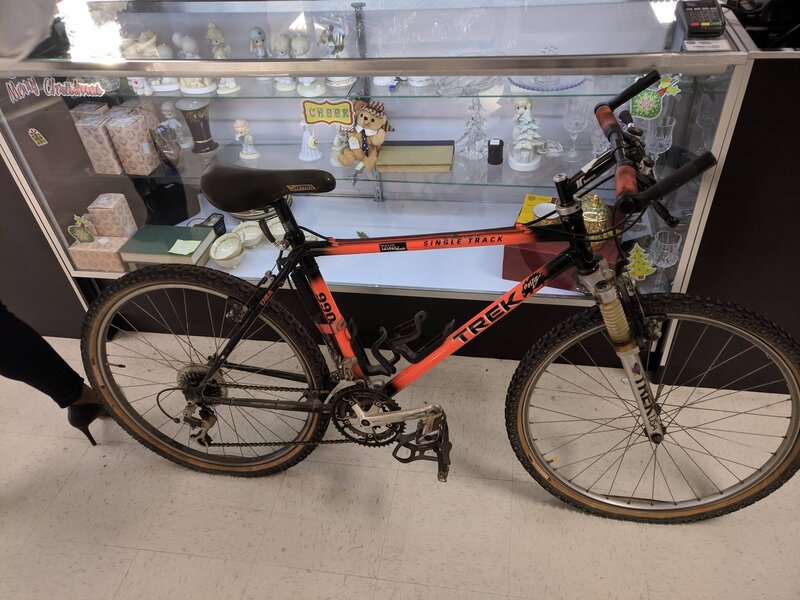 Here it is after I got it home. It was filthy, well used, and had some parts upgraded at some point. I immediately noticed the different wheels, I can only imagine the original front wheel was damaged in a crash. The Mogul Black Diamond was from '93, the M737 rear derailleur was from '94, as was the front wheel I think. The brake pads were hard, and the brake lever boots and ODI grips were so soft, they turned to mush in between my fingers, which is a shame, because I have never seen Attack grips in this color. The Ground Control tires were in OK condition, good for display, but I won't ride on them. The paint had faded, and looks less faded under where the stickers were applied. There was one Taya chain sticker and one Onza sticker on the top tube, and one Onza sticker on the down tube, all covering very small blemishes. 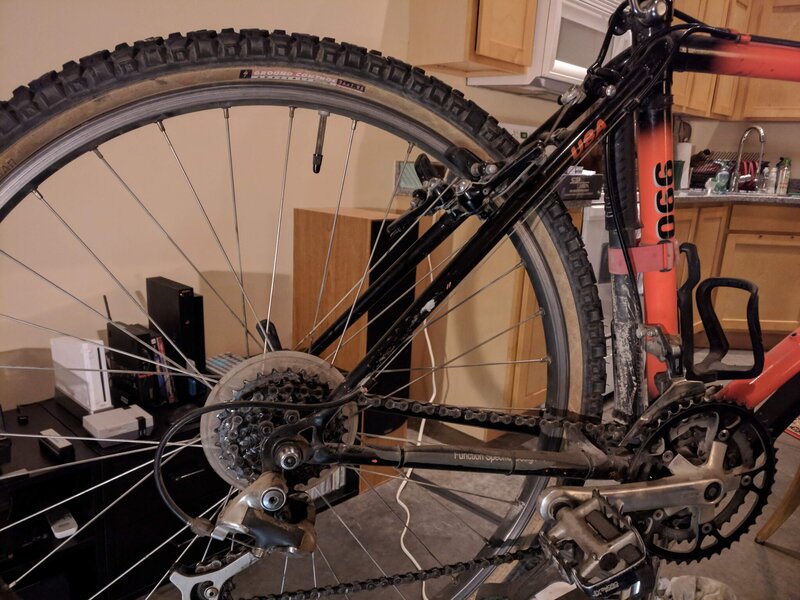 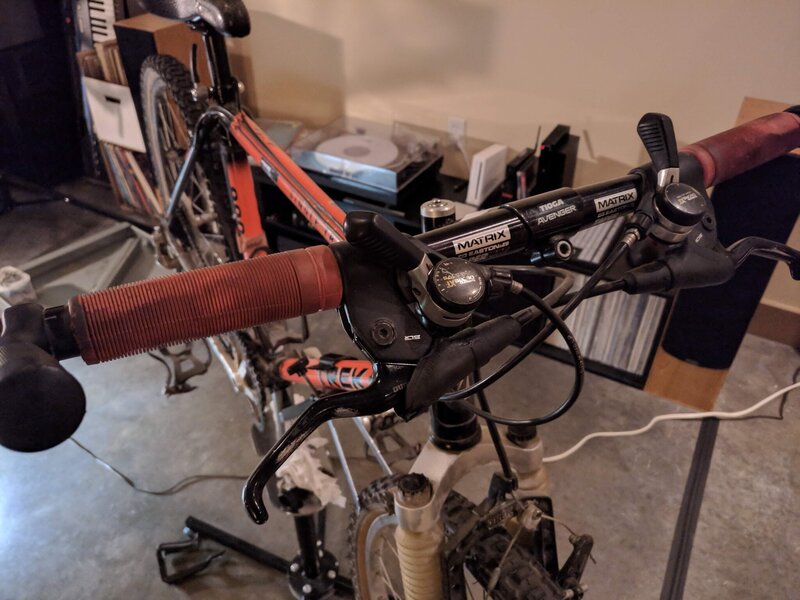 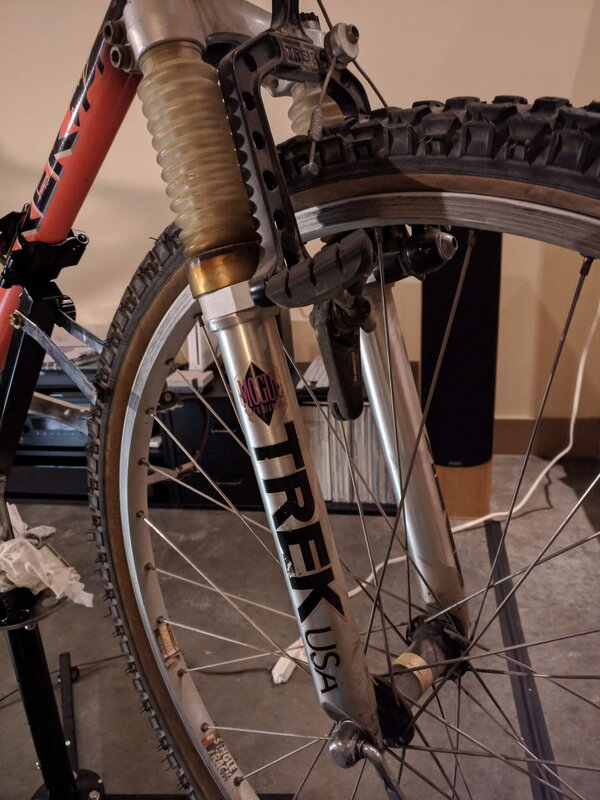 Here it is cleaned up and stripped of parts. 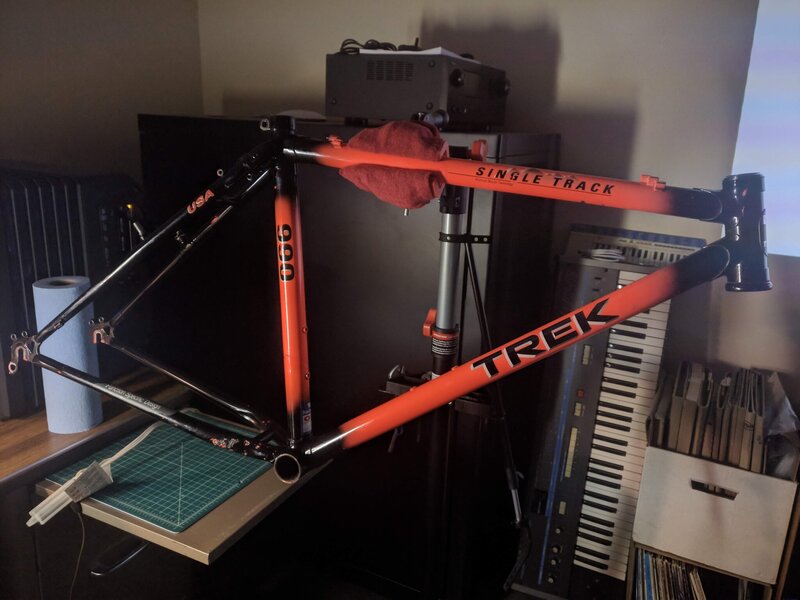 I was going to build the bike up with as many neon orange parts as I could find, since I don't like 3DV or Turq ano, or most flashy ano for that matter. The early 90's neon is more my style. 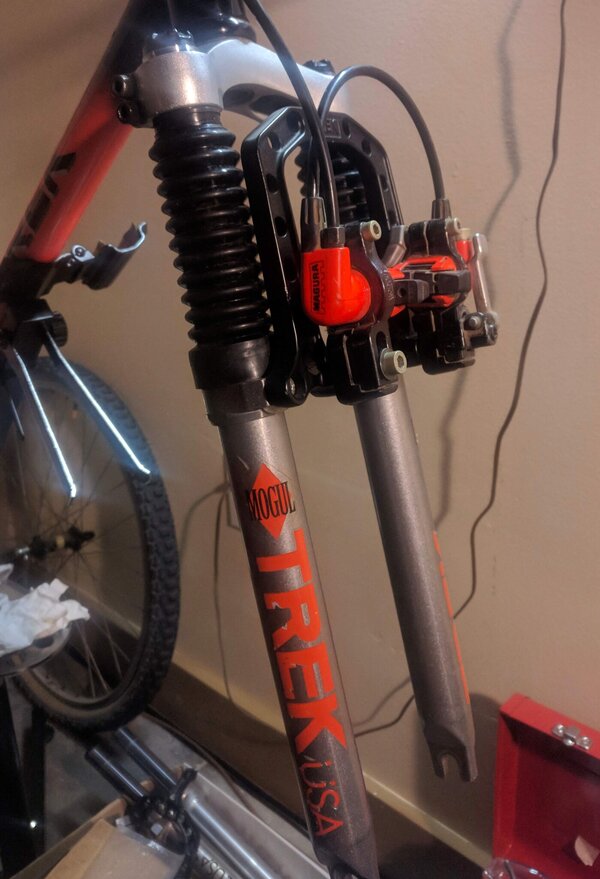 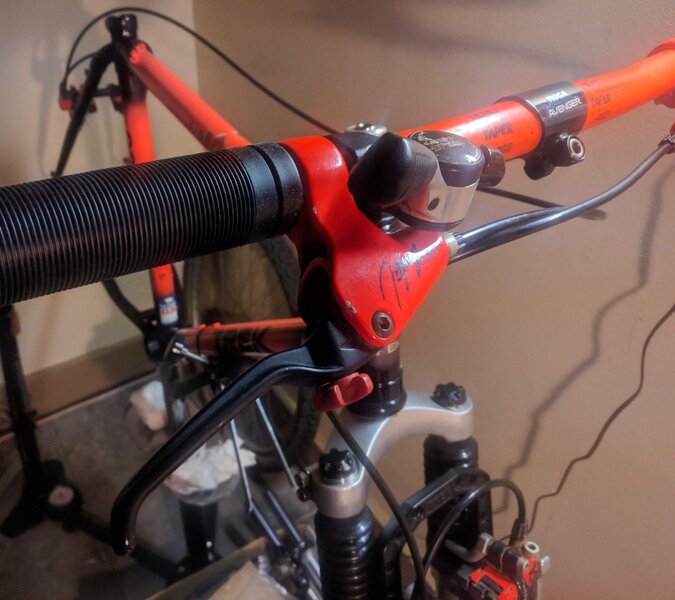 I found a matching Mogul, and some Maguras, even a Taper Lite, but after I started fitting parts, I realized that I was going in the wrong direction, and needed to find a more simple theme. I already have a '94 Marin Pine Mountain that I have fitted with my favorite fork, and my favorite cantis, and it's the perfect platform if I want to try out Maguras. I needed a simple 1991 high end bike, not an upgraded to 1994 standards bike like the previous owner did. 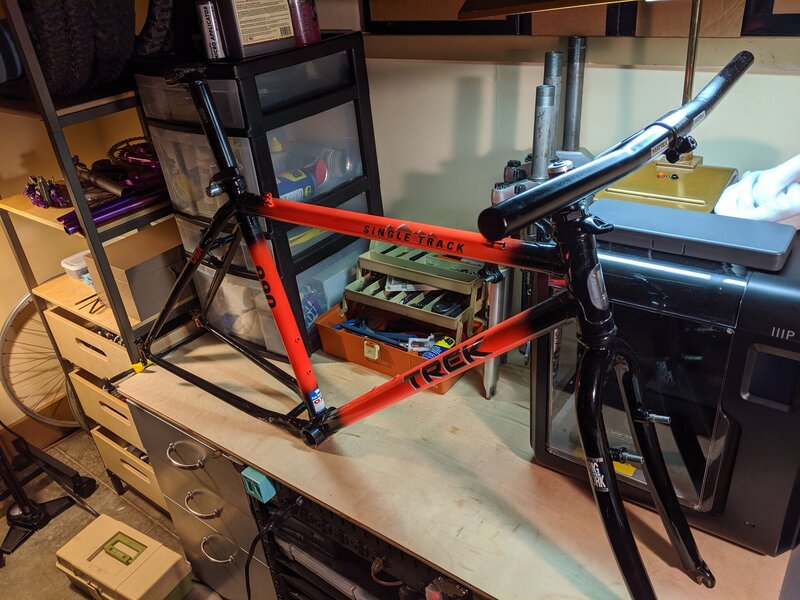 I stripped the bike back down, put the Moguls back together, and let the bike sit in my stand for a few weeks while I thought things over. In the meantime, I bought a matching Tange Big Super Fork, with a perfect length steer.

Over the next two years, I worked on other projects until I found the theme. I started sourcing Tioga parts, after I found a NOS black T-Bone seatpost in a rare 29.8mm size. The bike was already fitted with a Tioga headset and stem, and I just recently discovered the Tioga catalog from '92, as well as the video catalog that was posted in late 2020. After I realized they made a lot of neon orange accessories, as well as sleek black parts, I settled on an all black with subtle orange accents, courtesy of Tioga! I will be posting more about some of the parts that I have selected for the build in a little bit, after I clean them up and take some photos.
Last edited: Nov 30, 2021 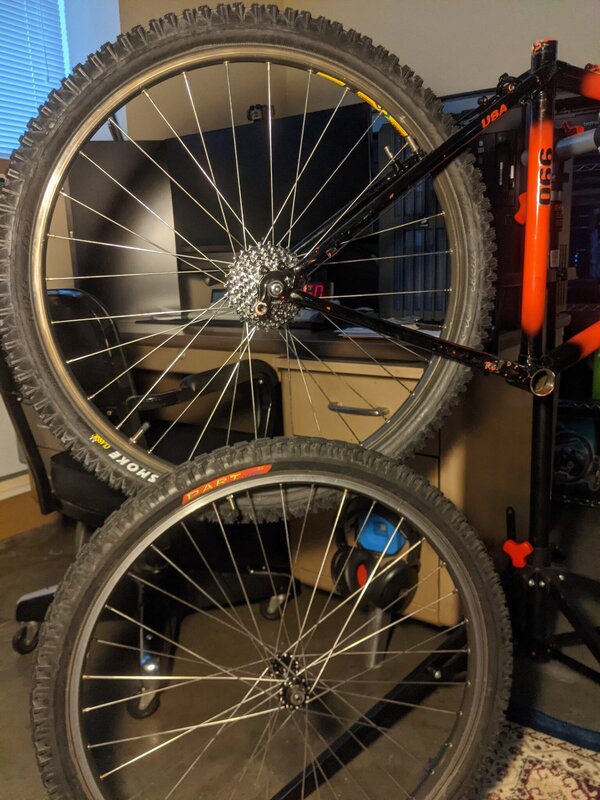 I found these on a poor Alpinestars AlMega that I got for $25 at the same thrift store I got the 990 from, only a few months after. The head tube was cracked, so I striped the bike, donated the other parts, and kept the wheels. 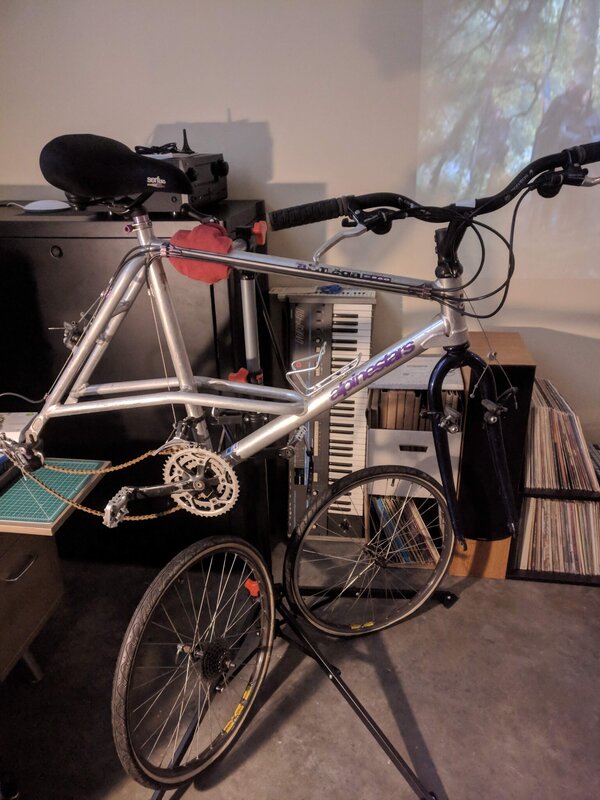 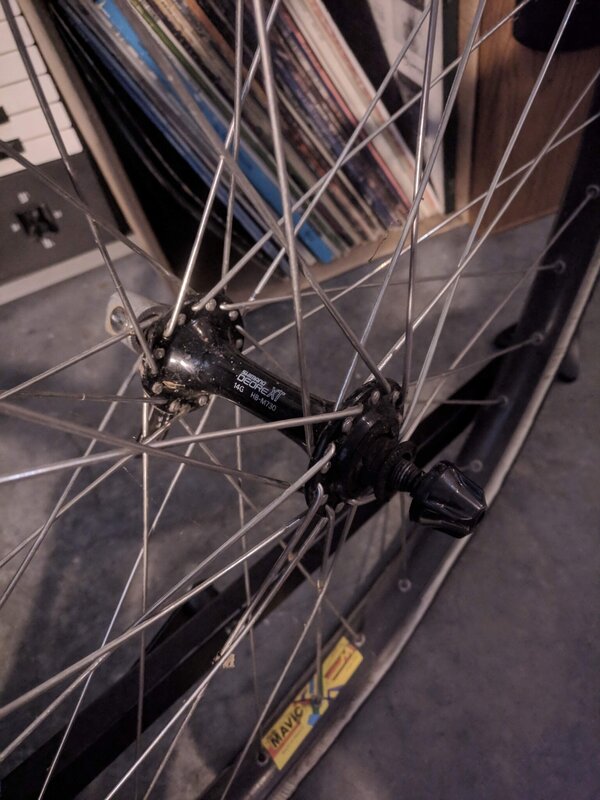 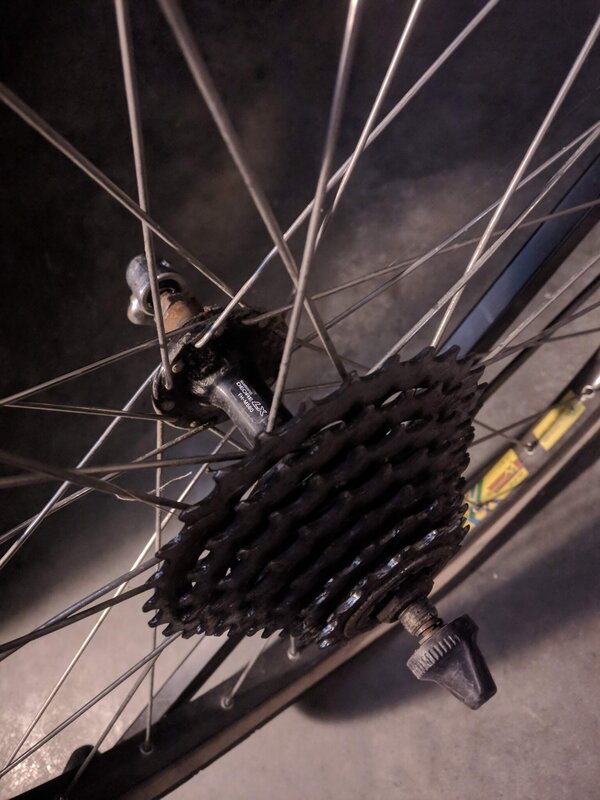 Eventually, I got around to cleaning them up for this project, and I was very surprised at the overall condition. 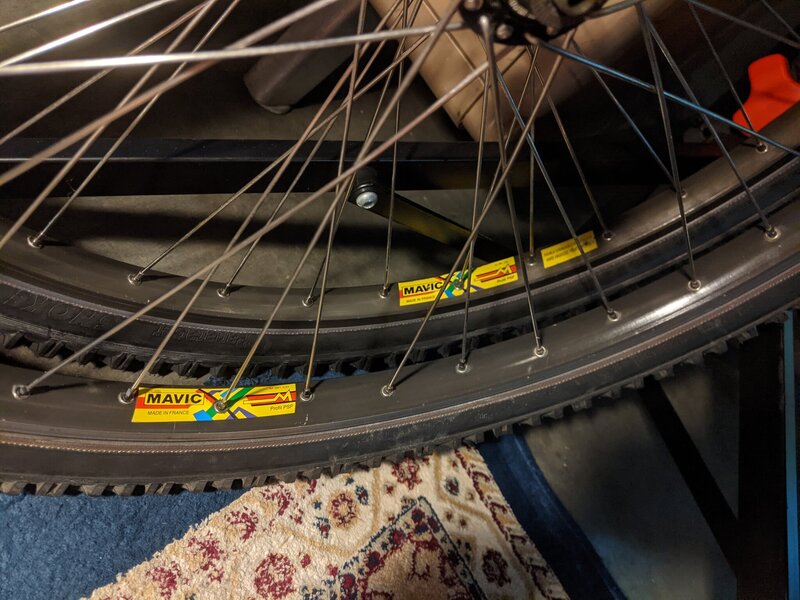 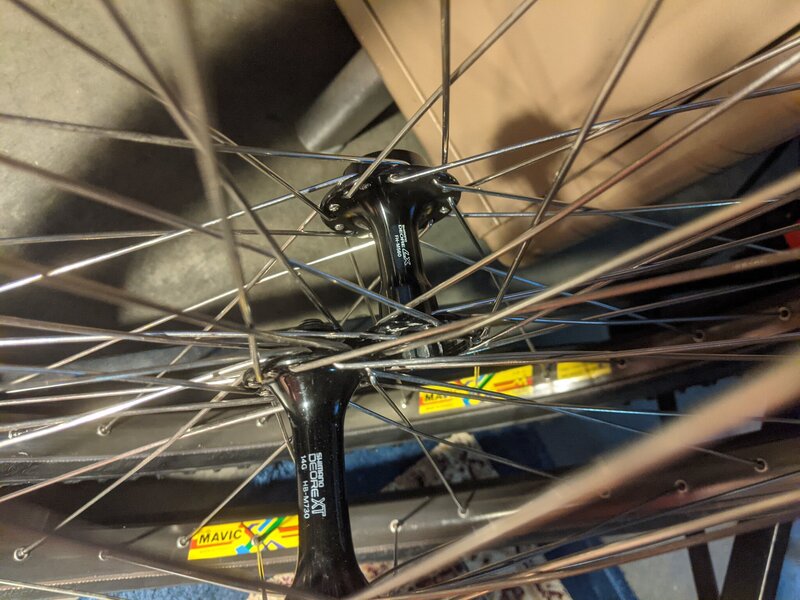 I have 8 spokes to eventually replace, but for now, a hub and free hub rebuild will do. 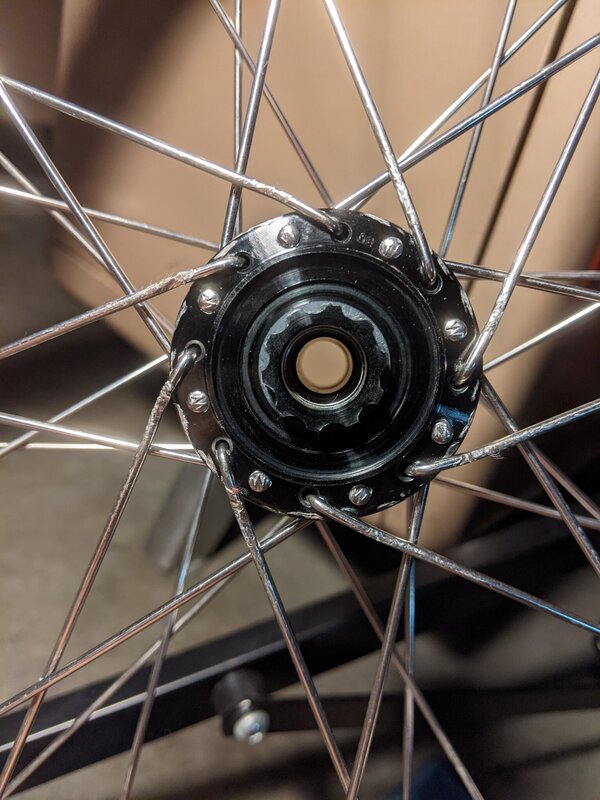 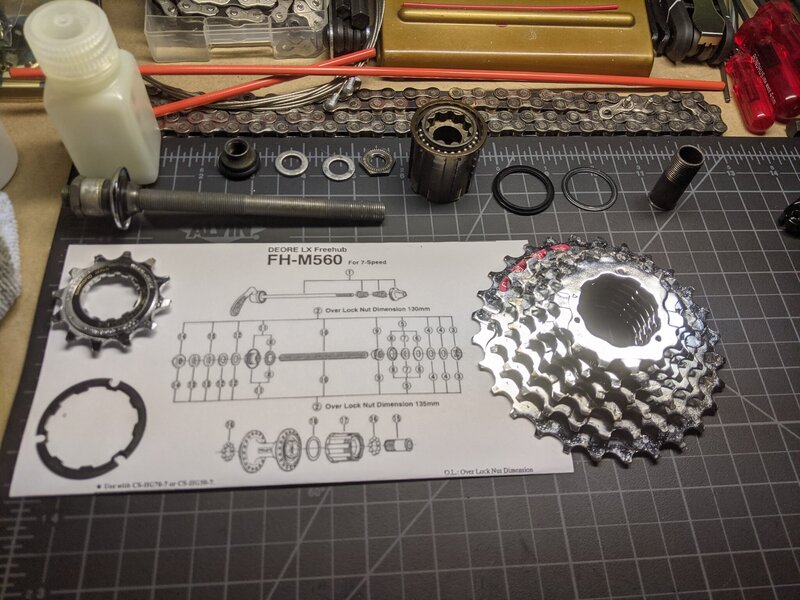 I also have a rear M730 QR, and a NOS front on the way from Norway, along with a Shark Fin. I hope that doesn't get hung up in customs!

I also have the original rear wheel, an FH-M730 laced to Matrix Single Track ATB Comp. I am actively looking for a matching front. I posted on the Rim Matchmaker thread here.

Back in the day, a wealthy neighbour bought one.. Guy was a lawyer for corrupt politicians and had also a fleet of expensive cars. I used to admire the bike and had no funds for a high end mtb. Then i read a test (was it bicycling?) saying the frame was a brick and the stumpjumper was the real deal. Anyways, i bought a 8700, new, at the dealer, a couple years later and hated it´s dead feeling ride from the go. I bet the steel 990 is way better....

Prodigal Son said:
Back in the day, a wealthy neighbour bought one.. Guy was a lawyer for corrupt politicians and had also a fleet of expensive cars. I used to admire the bike and had no funds for a high end mtb. Then i read a test (was it bicycling?) saying the frame was a brick and the stumpjumper was the real deal. Anyways, i bought a 8700, new, at the dealer, a couple years later and hated it´s dead feeling ride from the go. I bet the steel 990 is way better....
Click to expand...

A friend of mine told me they were heavy duty, emphasis on the heavy. I don't mind, I've heard the ride is nimble.

I wouldn't mind having a stumpy though! 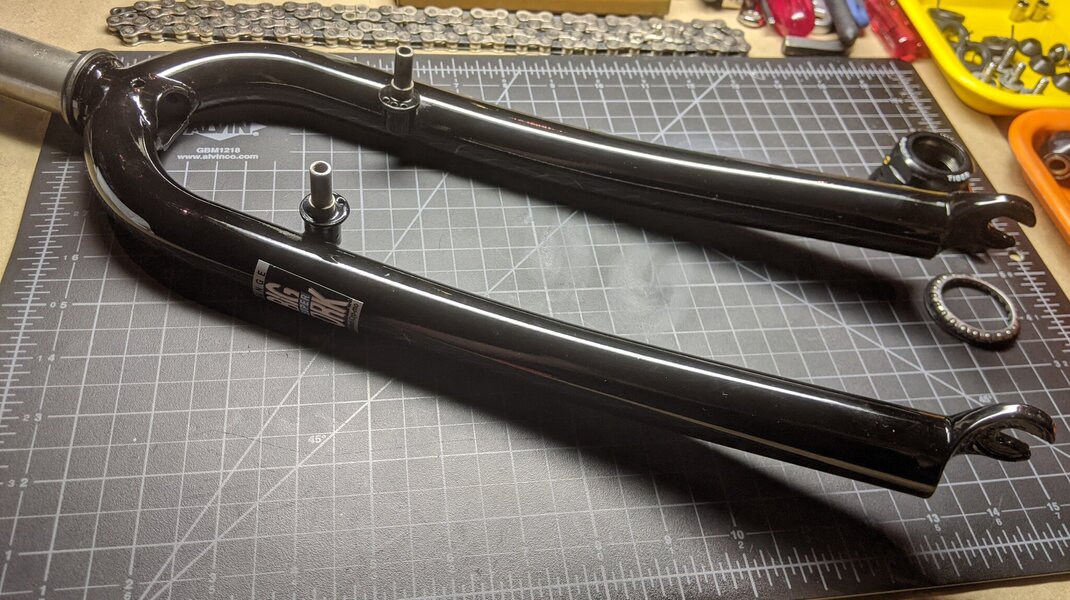 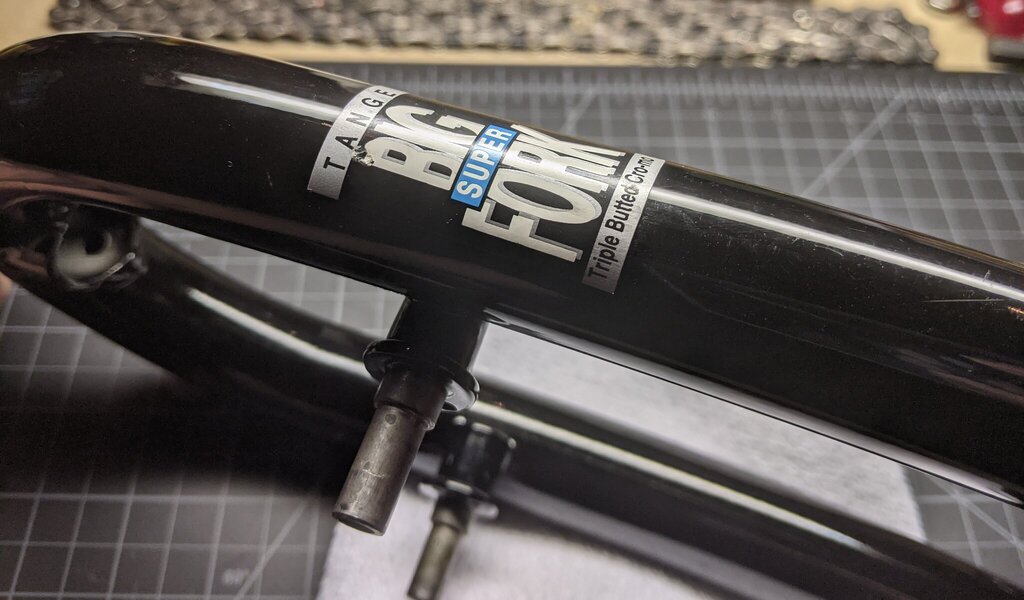 This is the fork that would have come on this bike, but it did not originally come with this bike. I bought it for $40 from a buddy Scott from one of the vintage mountain bike Facebook pages. It even came with a Tioga headset race and most of the stack that went on a '91 990, so that was a bonus. 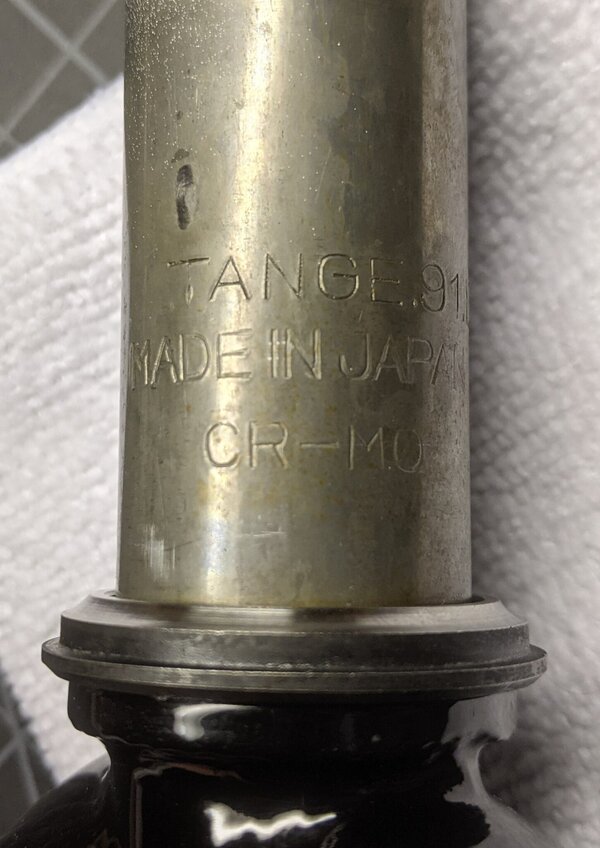 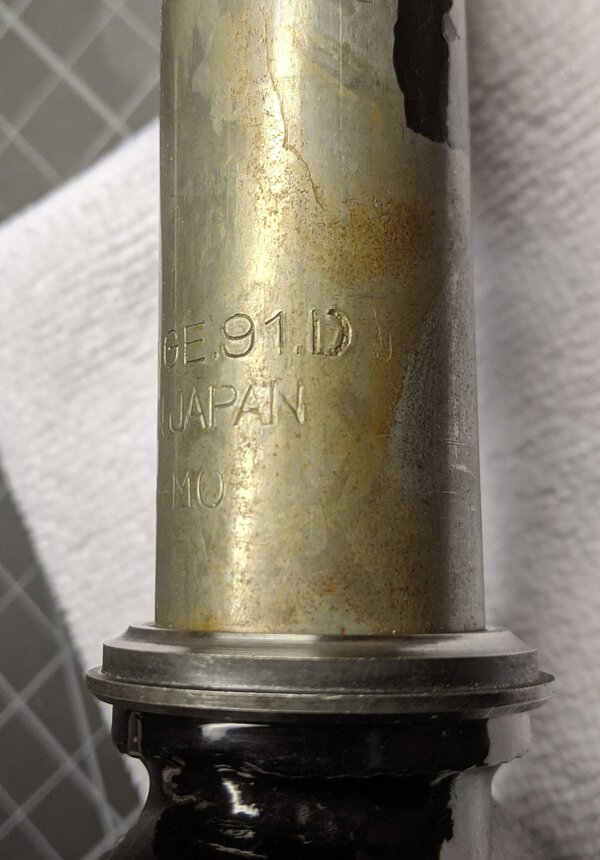 It needed a little bit of paint correction, and I finished it off with some black T-Cut, as so many people here seem to like. 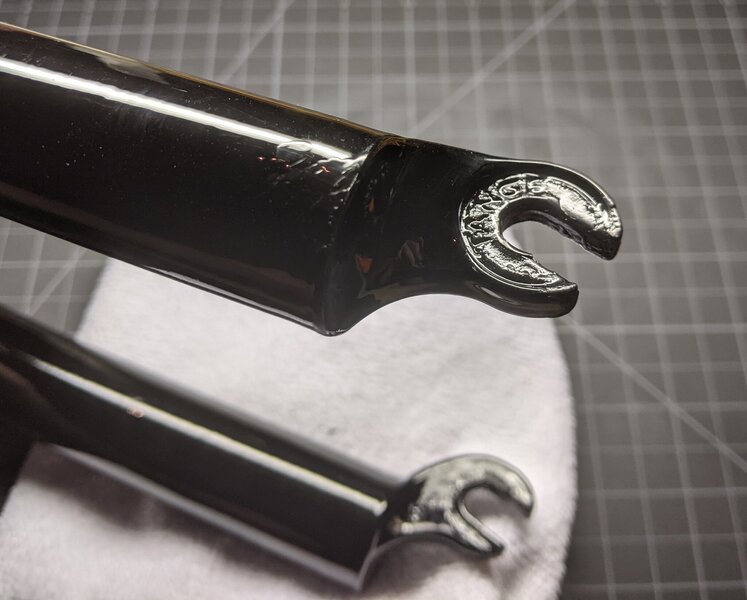 Here are all the original components, the new parts, and some spare NOS stuff that I picked up for safe keeping. 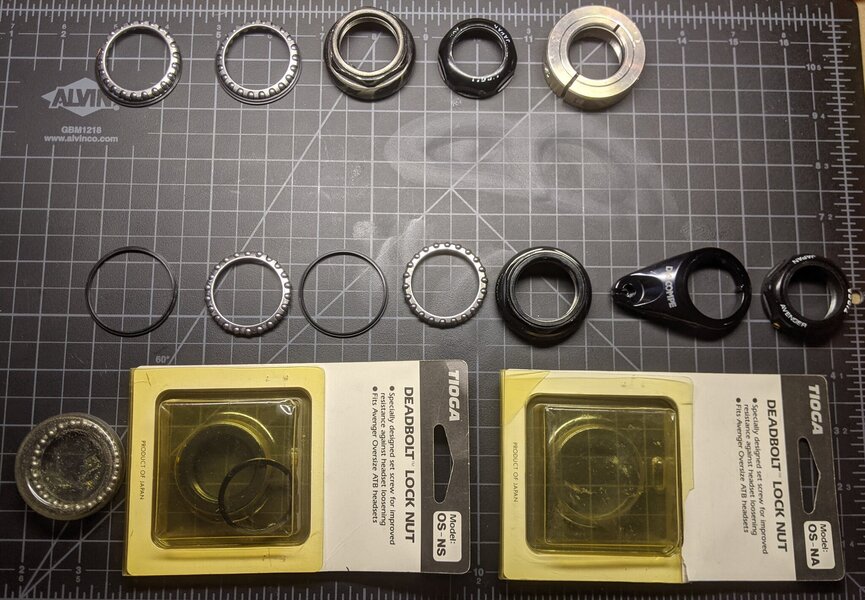 Here is the full stack that's going on the bike, including one of the lock rings. I went with the aluminum one. It's the closest thing I can get to an Impact headset! I am not too fond of the Dia Compe cable hanger. I could get a T-Bone with internal routing... 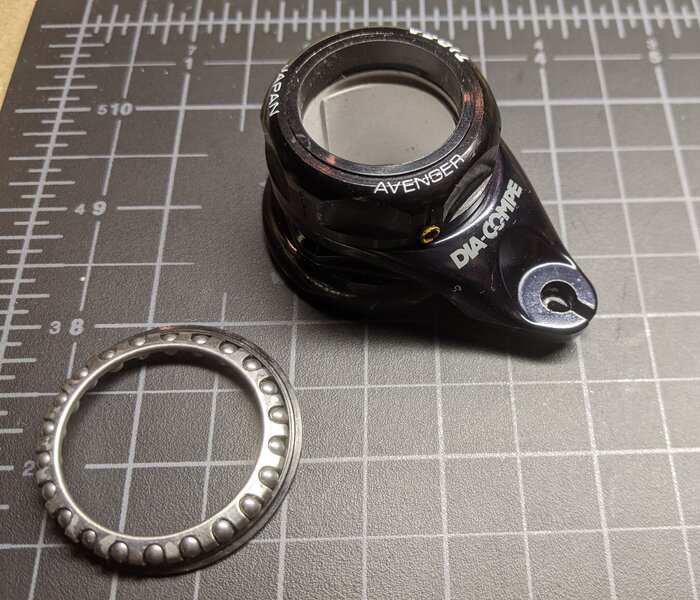 I also bought a Deadbolt in steel, and NOS OS bearings. 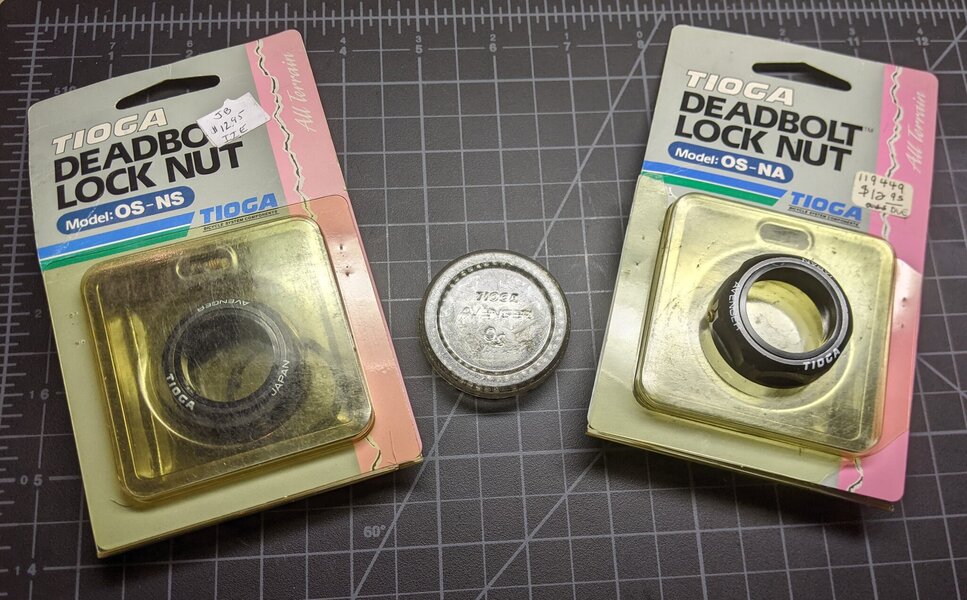 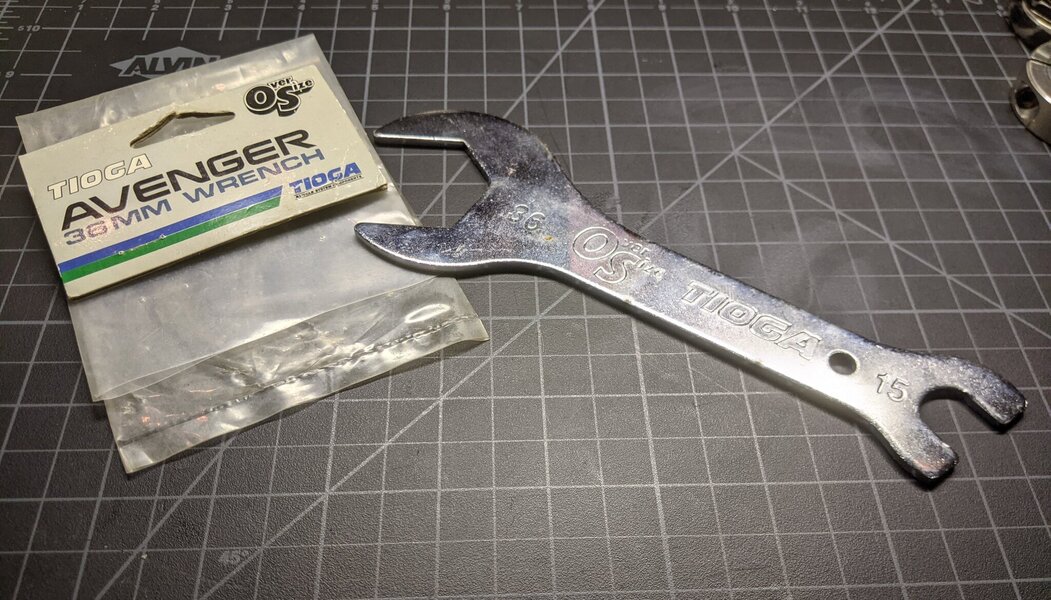 I would very much like to find a proper Tioga cable hanger to replace the original Dia Compe one. I am looking for one like the following two.