This Cindercone been through thick and thin and refused to die, suffering along the way the indignity of having everything from Gripshift SRT500’s :facepalm: Dia Compe Servo Wave levers :? and Pulstar Hubs as upgrades to being neglected and left for dead and only dragged out for outings as a pub bike.

Needless to say after seeing what “Splatter Paint” did to his with his Cindercone after a little TLC I was inspired (12 months ago) to drag the old dog out and round up the previously stripped off parts from my tool box, folks house and my brother who originally bought it back in the very early 90’s
Gradually its come back from the grave in the process its been riden at the Surrey Hills round of the National series where the headset came loose on a long decent and had it not been for Andy Z who just happened to have a 1’ head spanner I’d have ended up having to bail out

Paint is totally original, which was a torment for me, as I'm not a natural lover of Patina, but I've relented on this one and to be honest I think it was the right choice

It also went to Icon-O-Classic this year where it rubbed bars with Kleins and Fats etc and I can honestly say it didn’t get a second look .....Can yah find it 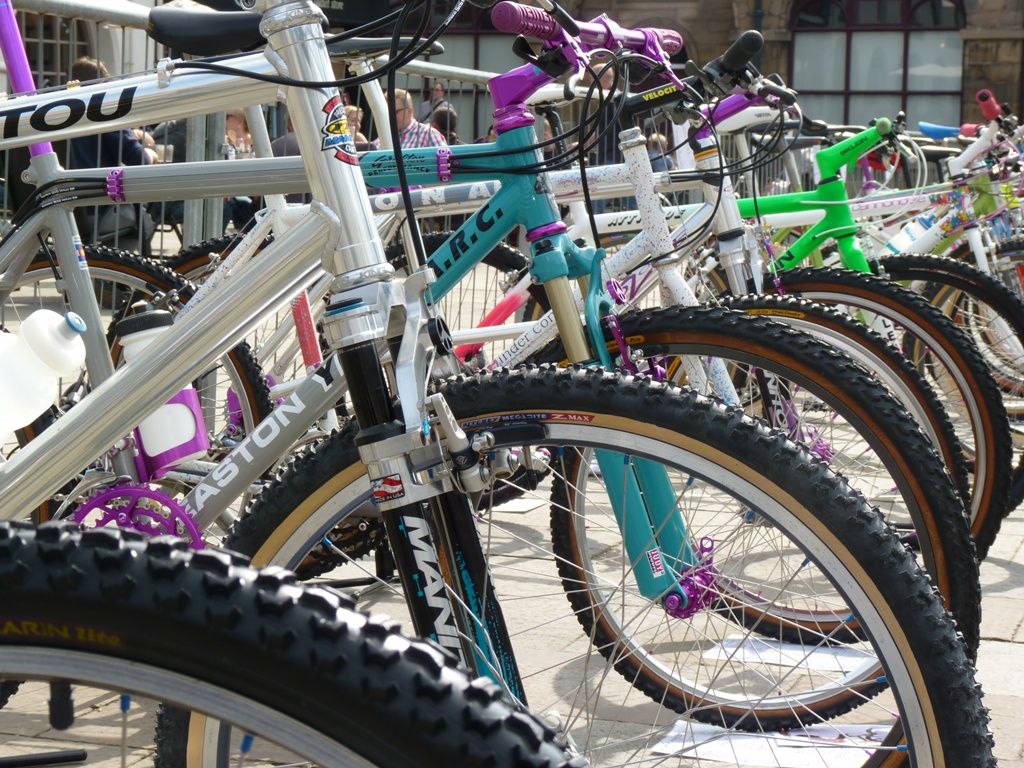 Anyway hope you like this restoration aside from the tyres (Conti 1.5’s) and ODI Grips I think almost everything is either original or period correct, However as you can see I do ride it with a Modern Turbo saddle as I find the Avocet a wee bit too hard and I prefer a black post to match the stem

Here's my 25 year old Ruff Diamond after a Polish and De-scale, she's a rider so forgive the wee bit of dirt 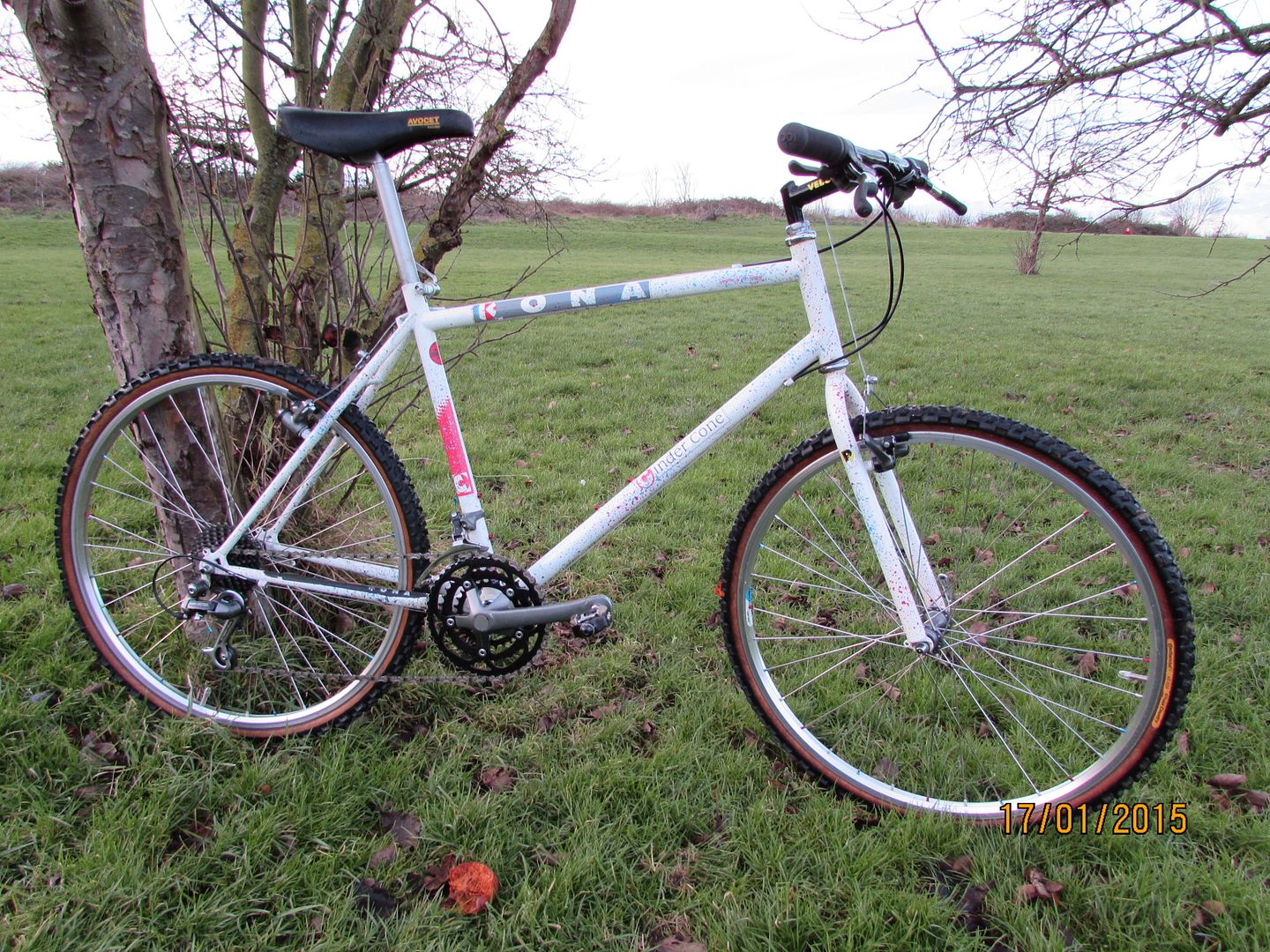 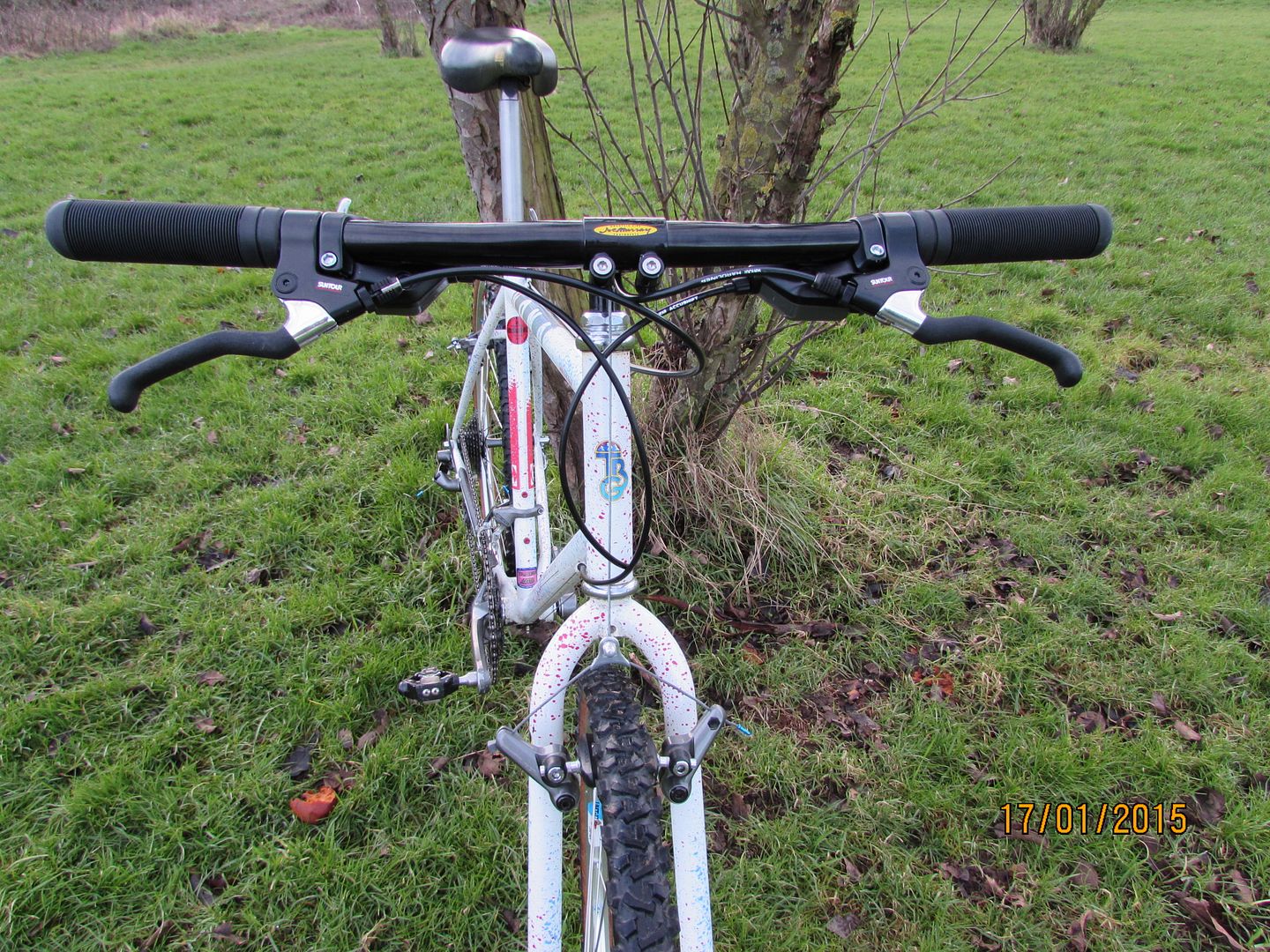 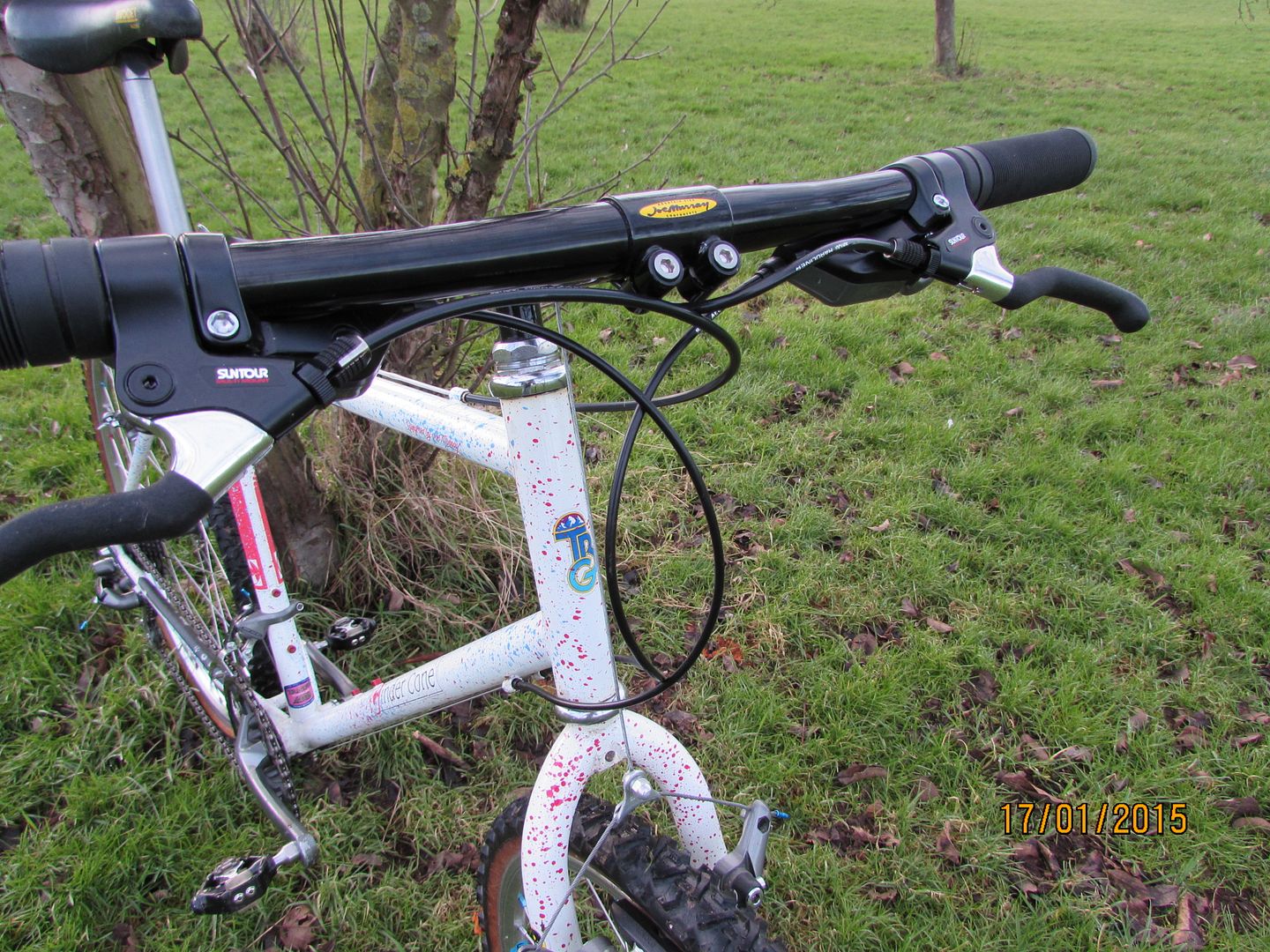 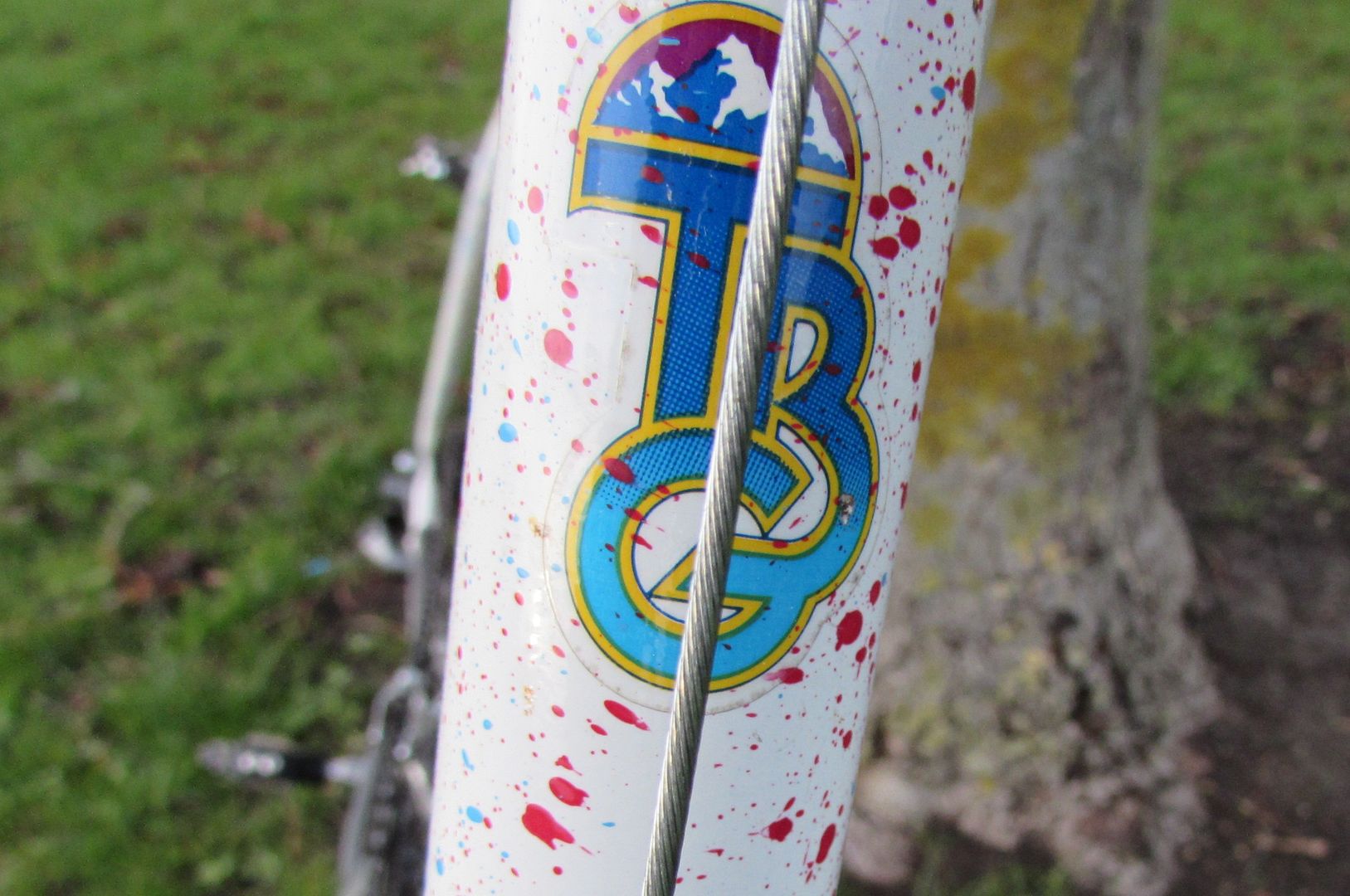 The cables and Levers were great find, as mice had chewed most of the rubber covering of the levers.. that was a bit too much Patina for me ! 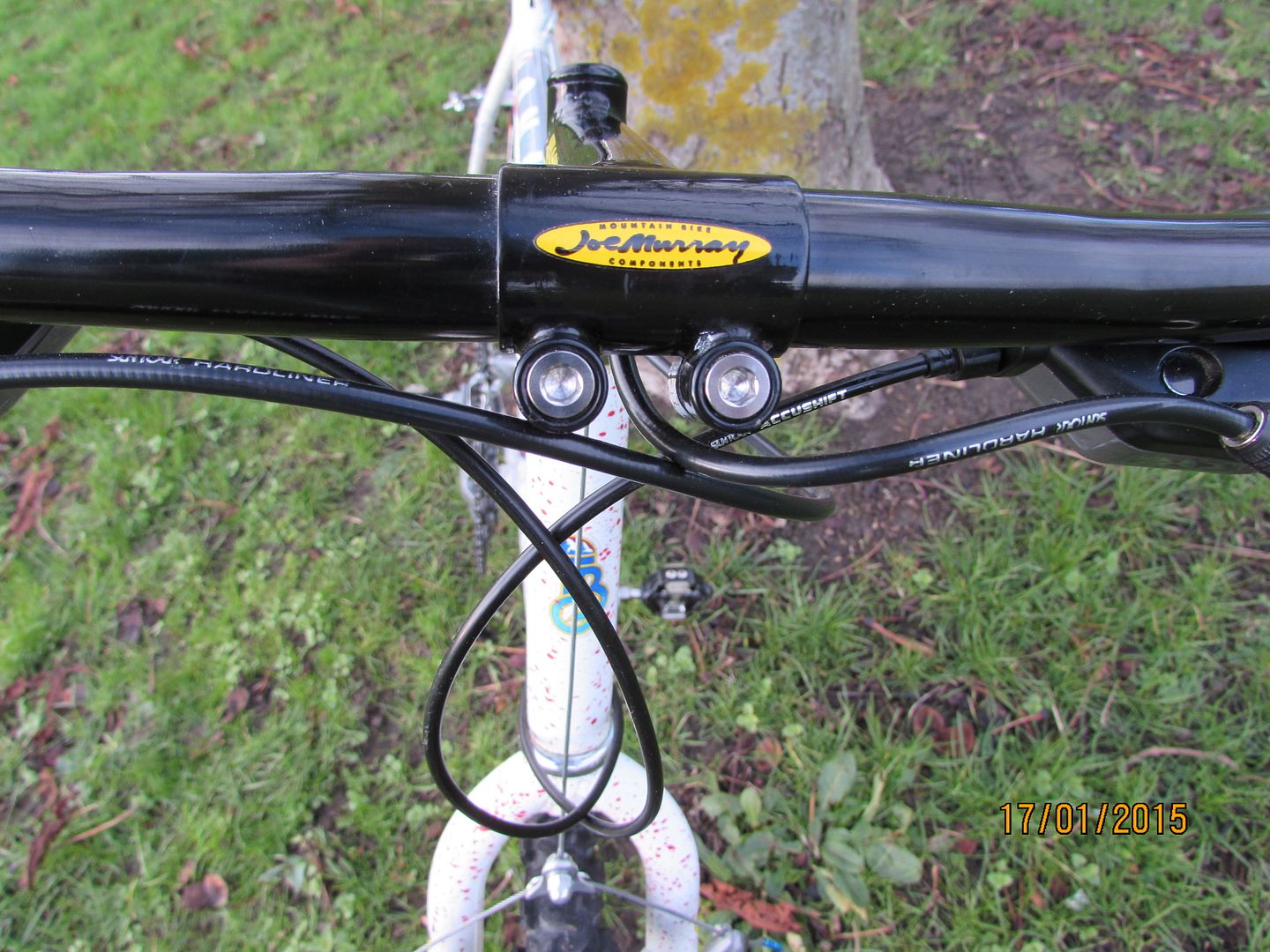 The power of Autosol and a bit of WD-Pro inspired elbow grease .... hey presto 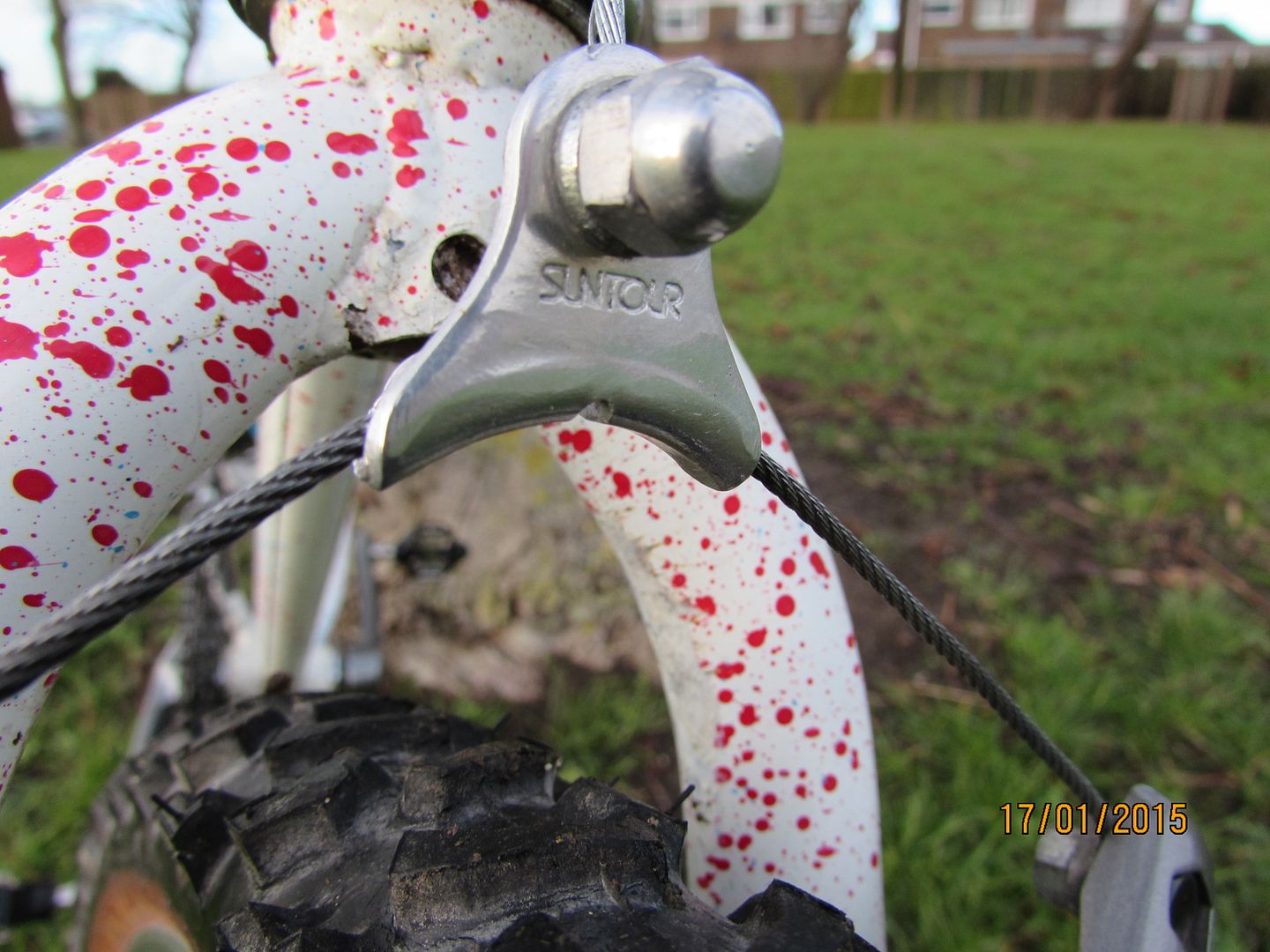 Wheels were stripped and respoked as the original spokes wouldn't polish up, and I couldn't help adding the coloured nipples (flame me if you like....but it was payback for keeping the paint) 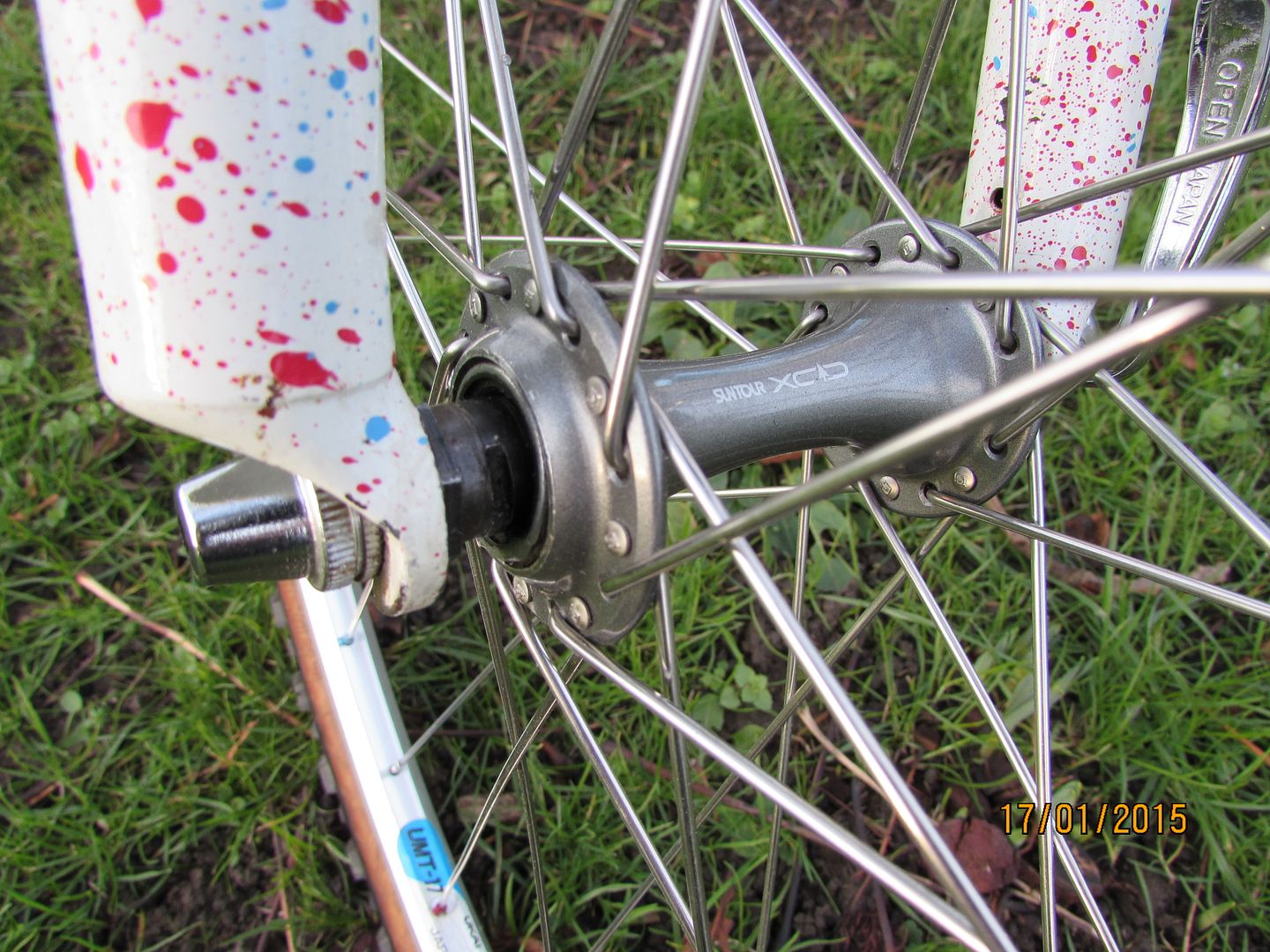 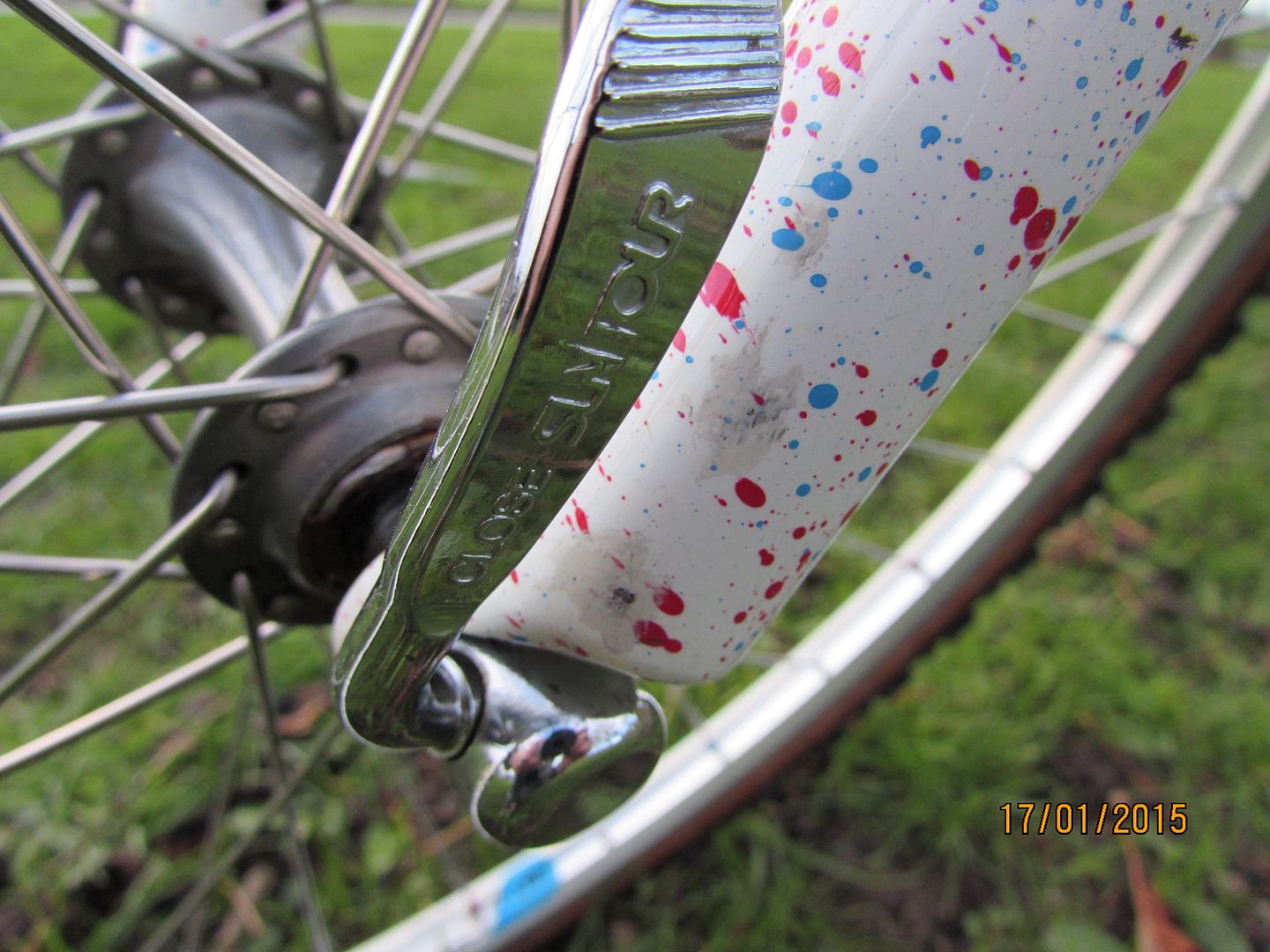 Catalogue Spec is UM20's but these have always been on this one, any ideas ? 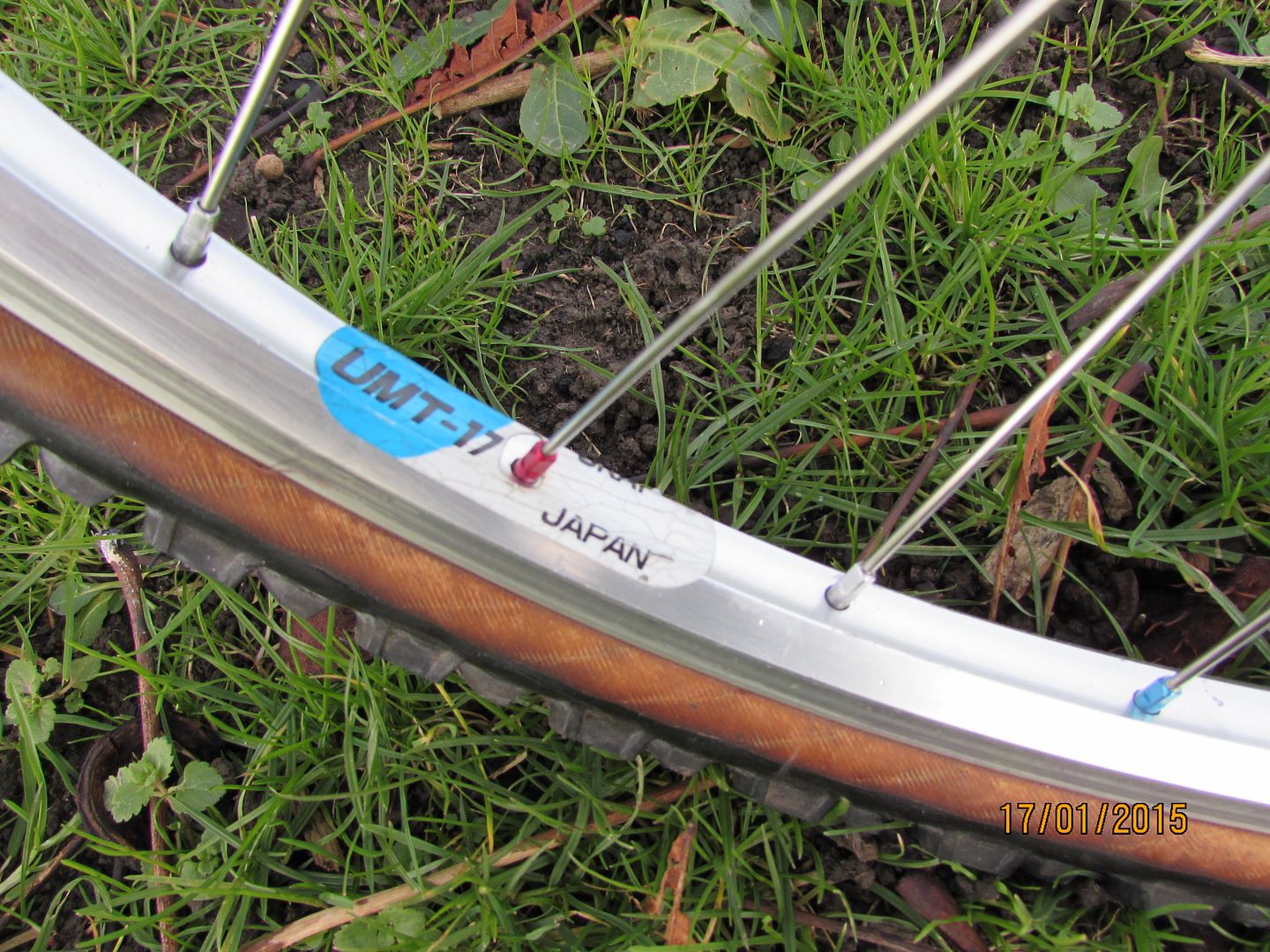 Forget Diego Maradona and his 1986 antics this truley is the "Hand of God" ...I've got proof 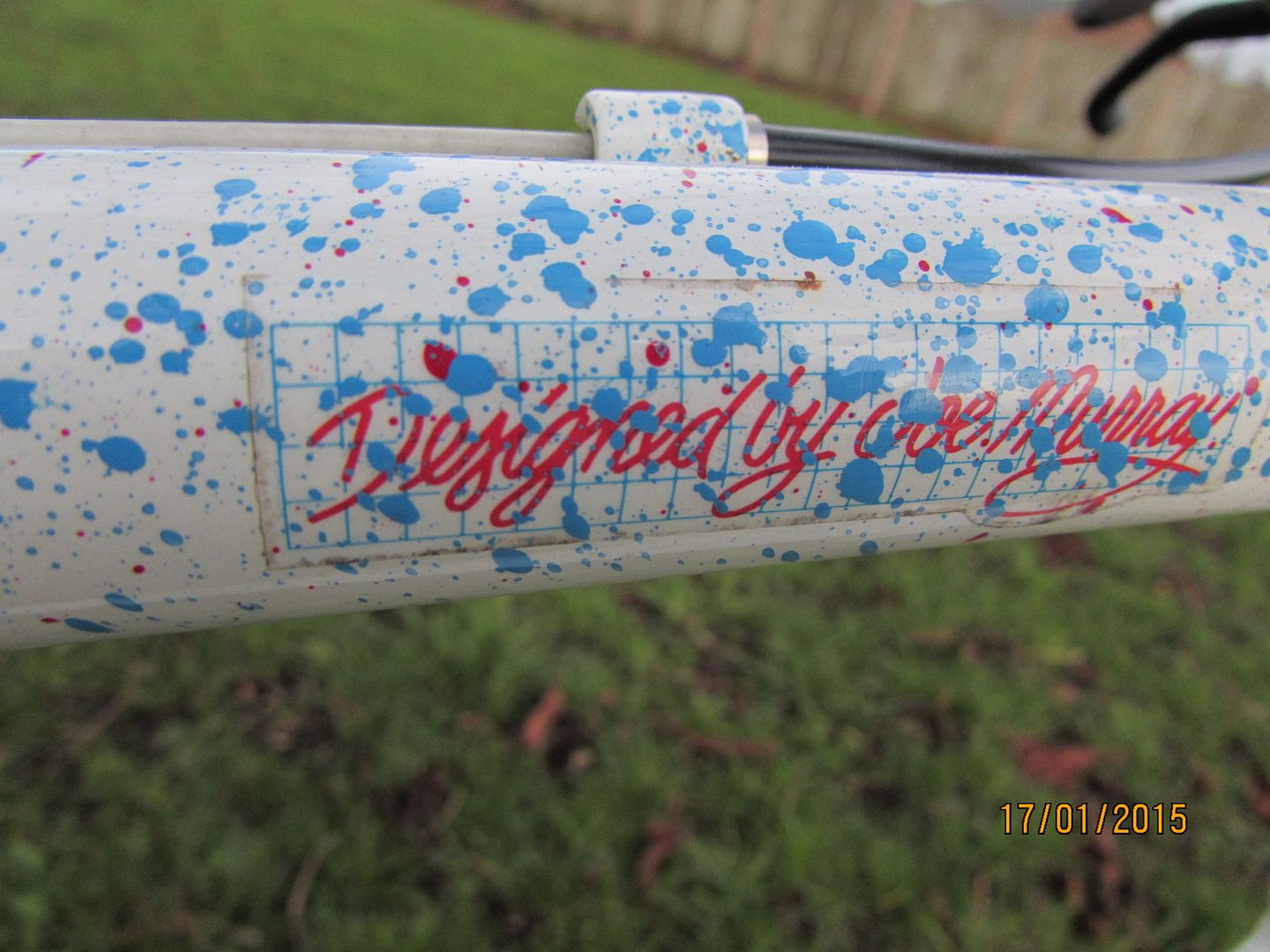 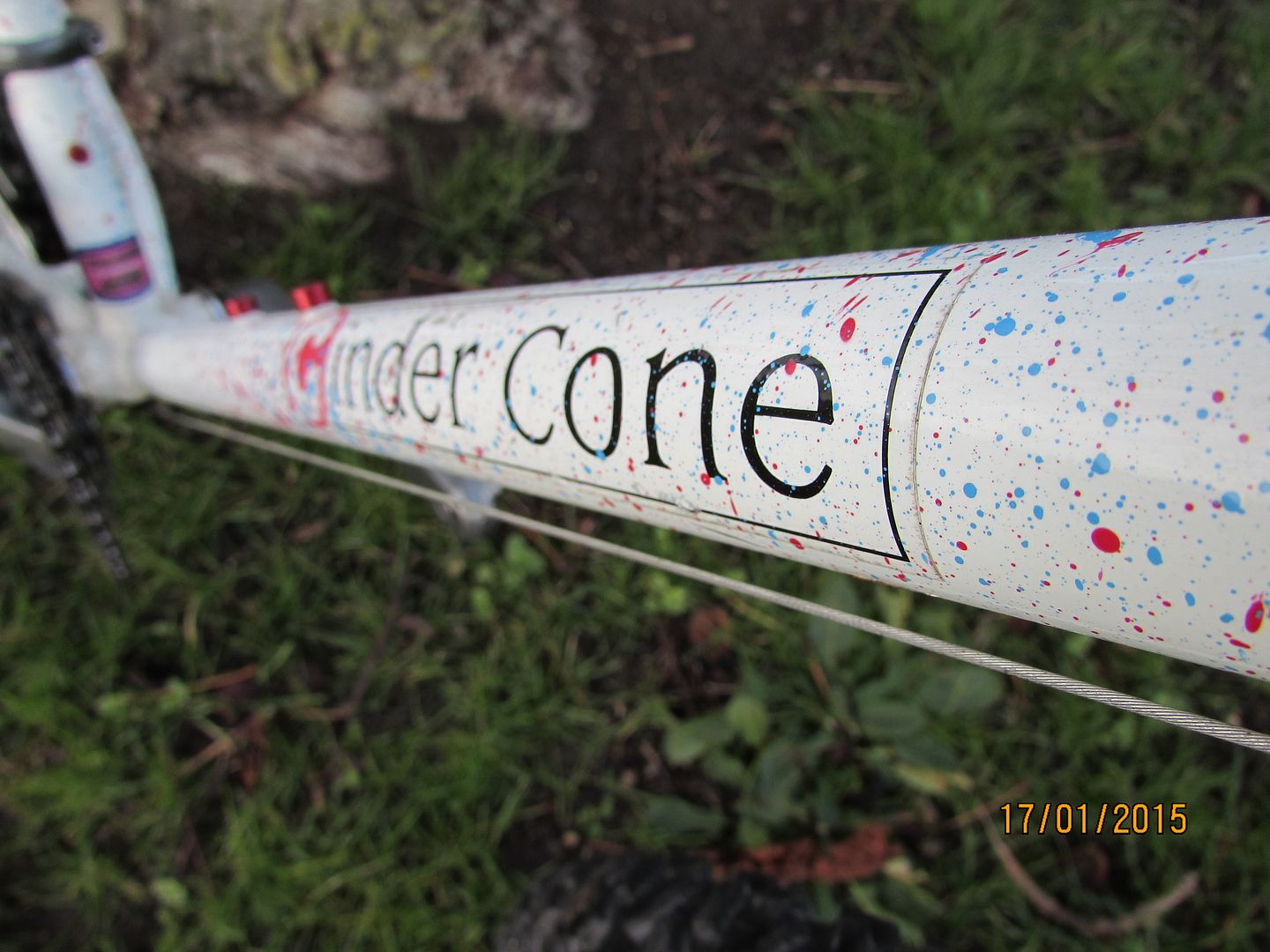 Not the lightest material in the world ... but still going strong 25yrs on 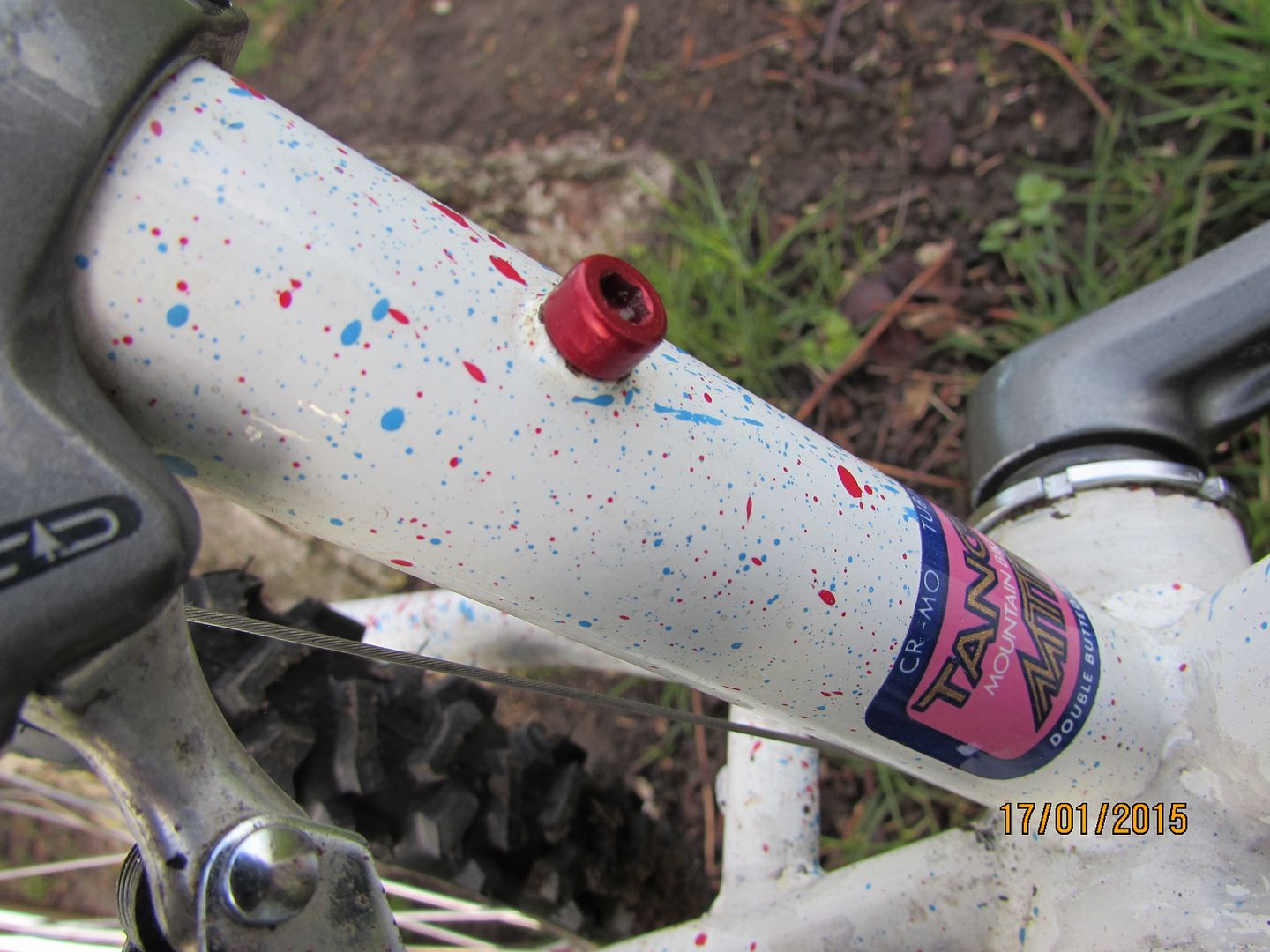 Bit of Rust or just some Patina 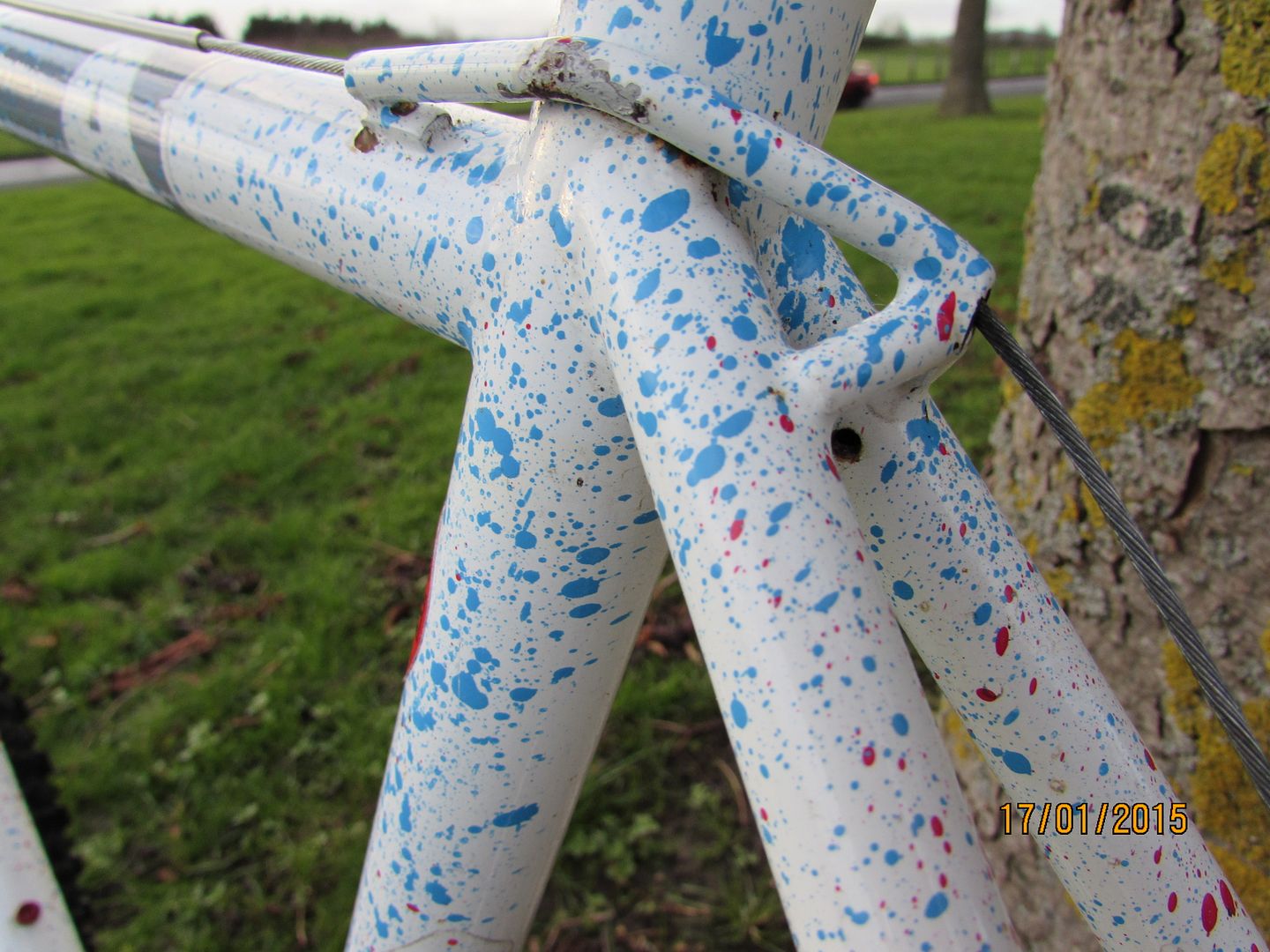 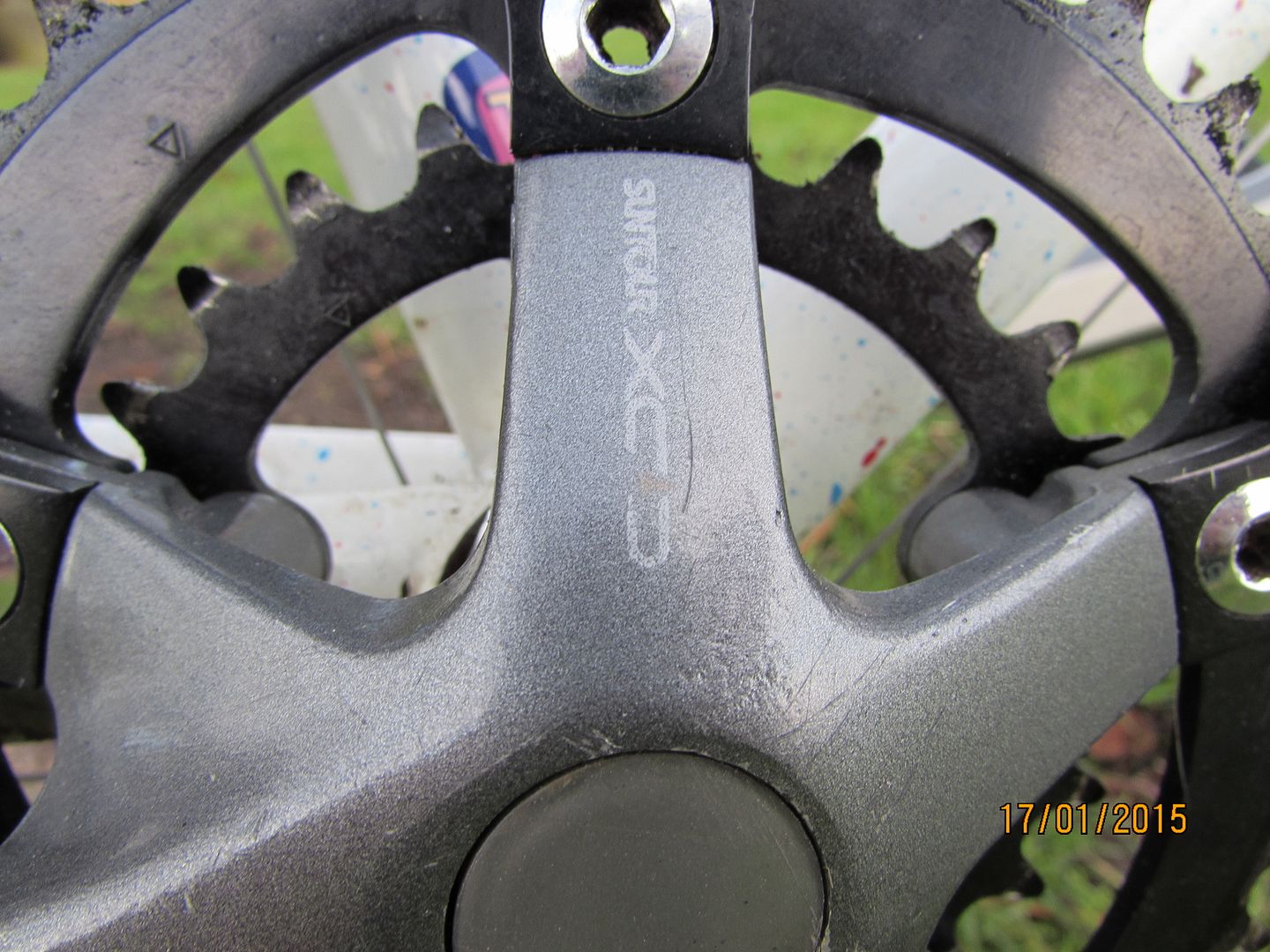 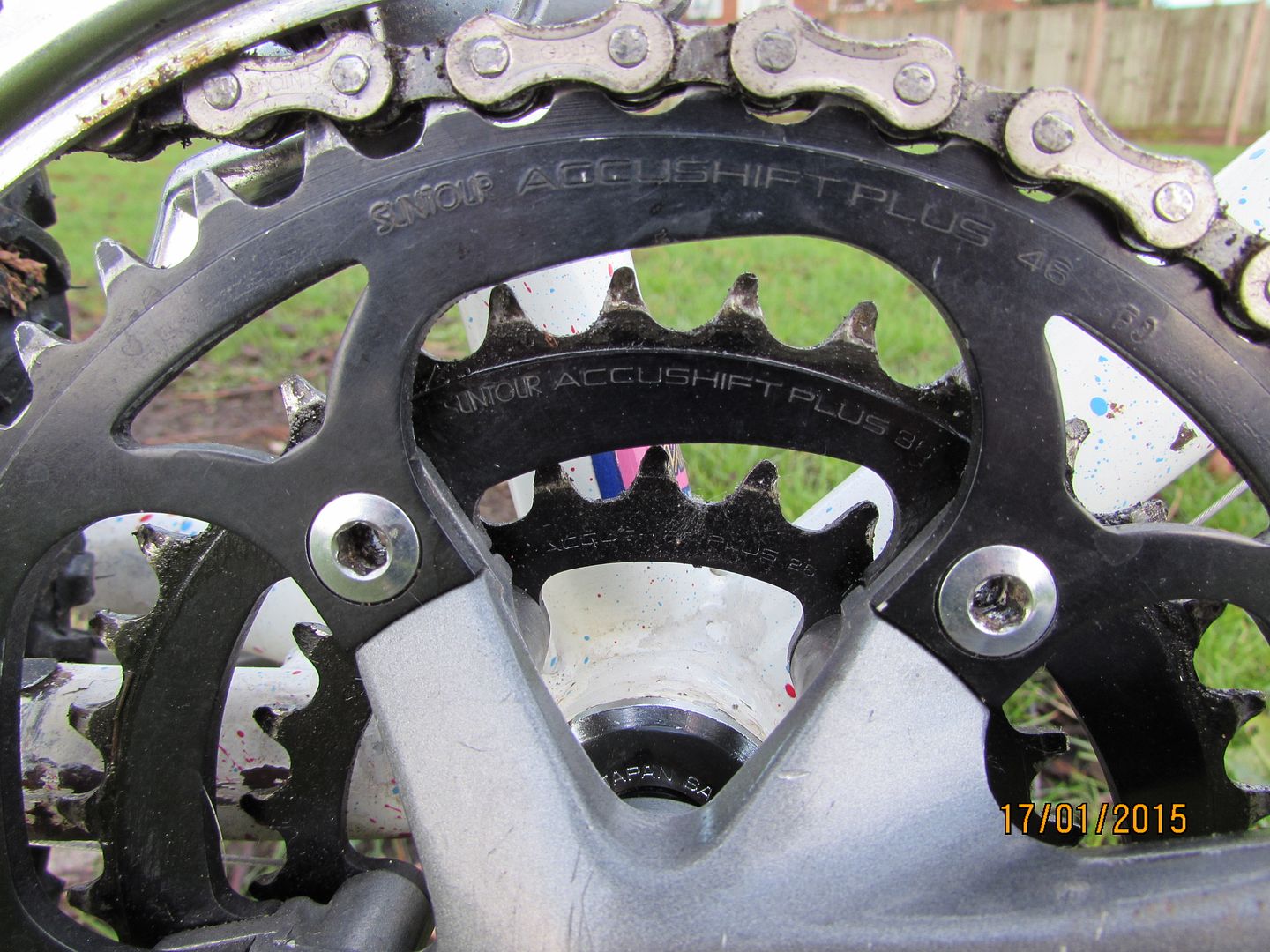 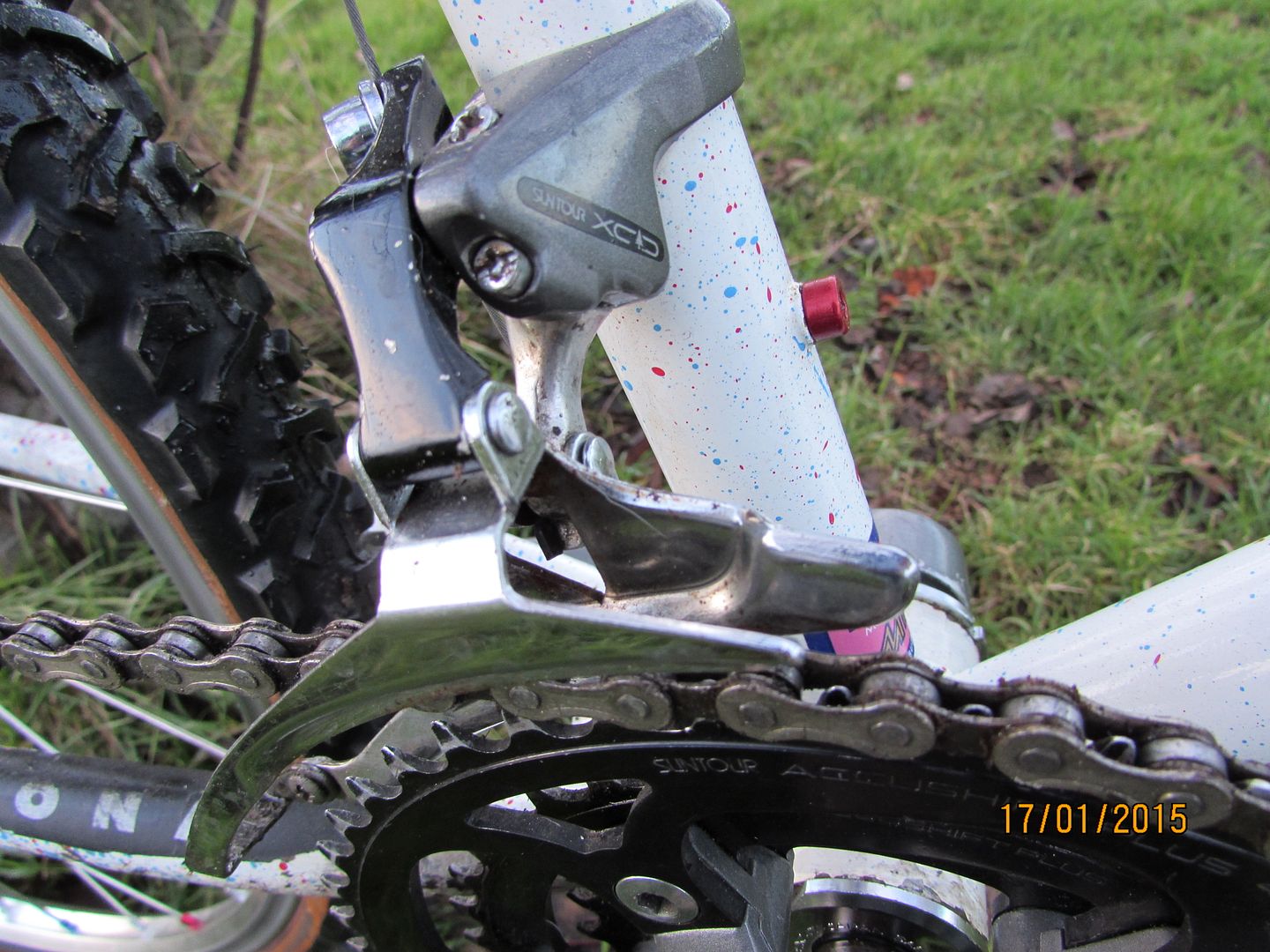 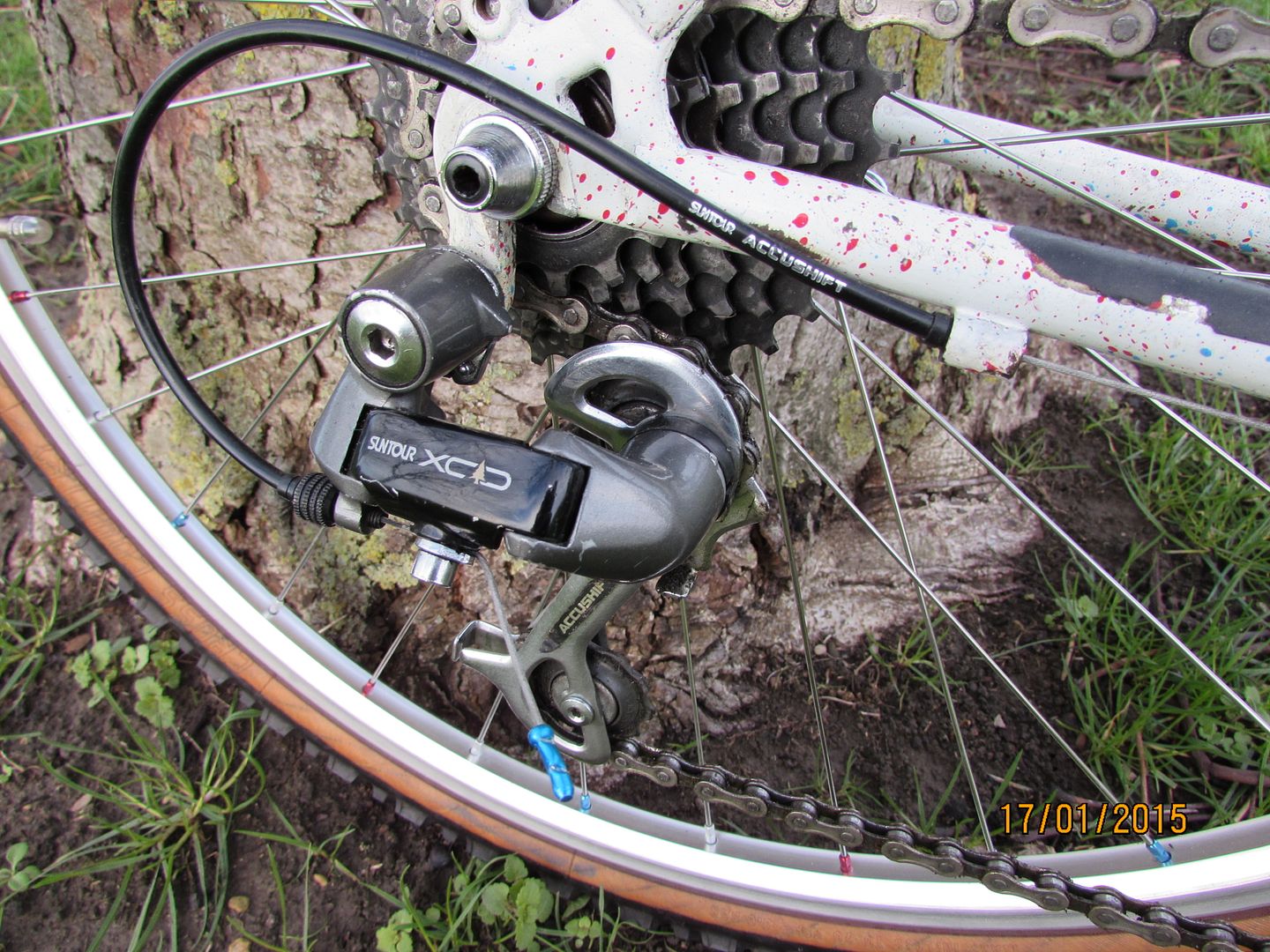 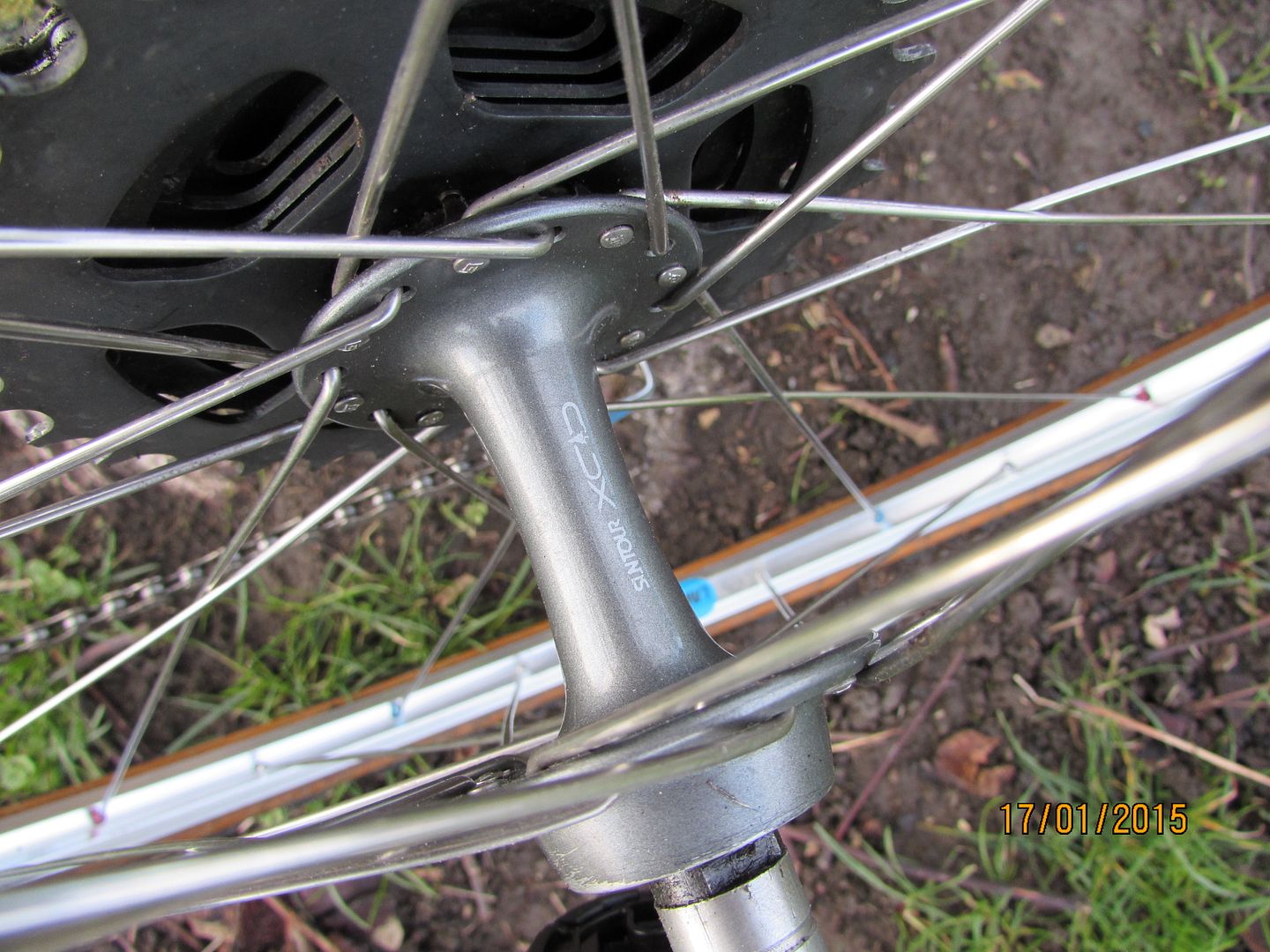 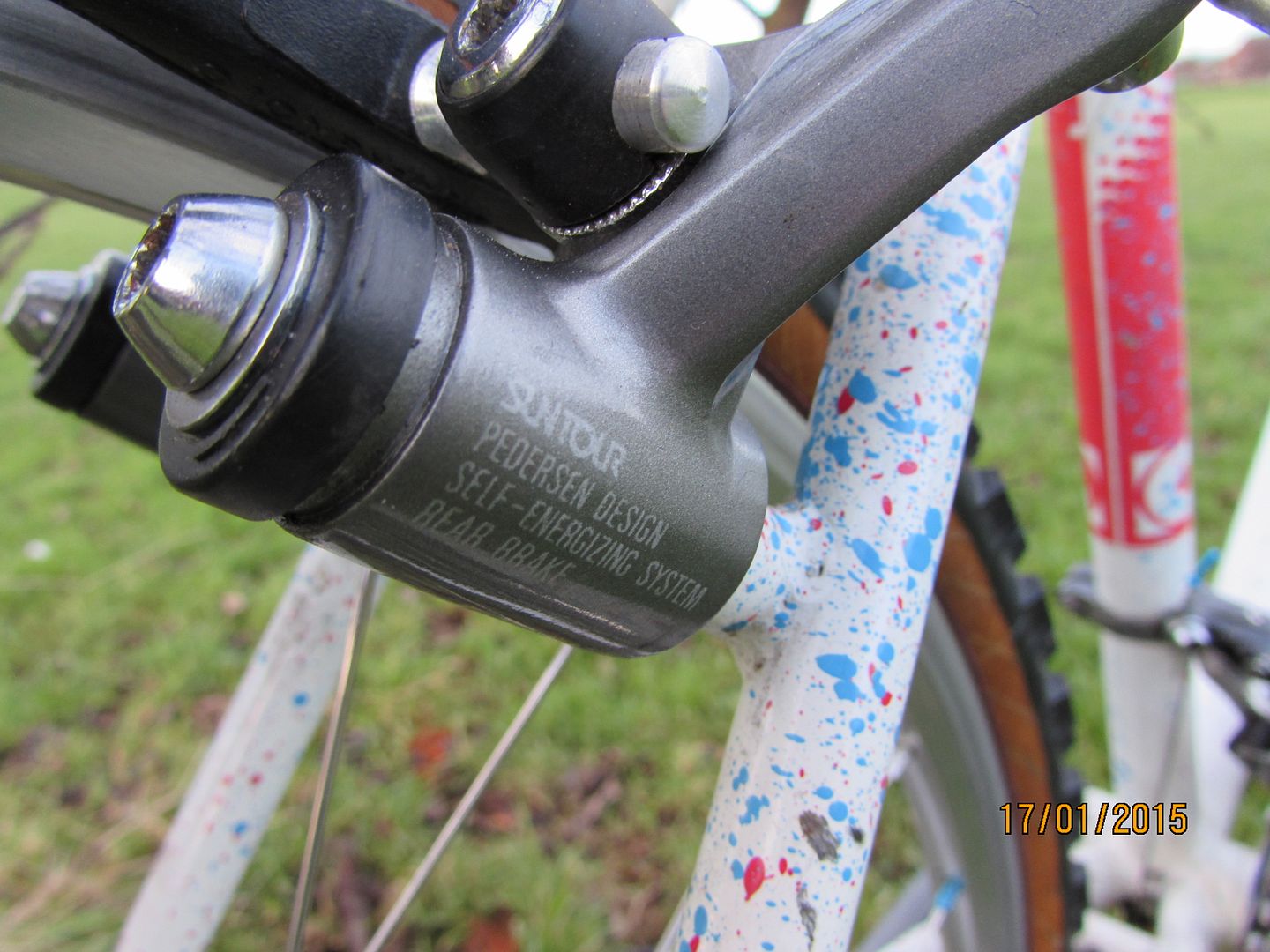 Prefer a Flite if I'm honest 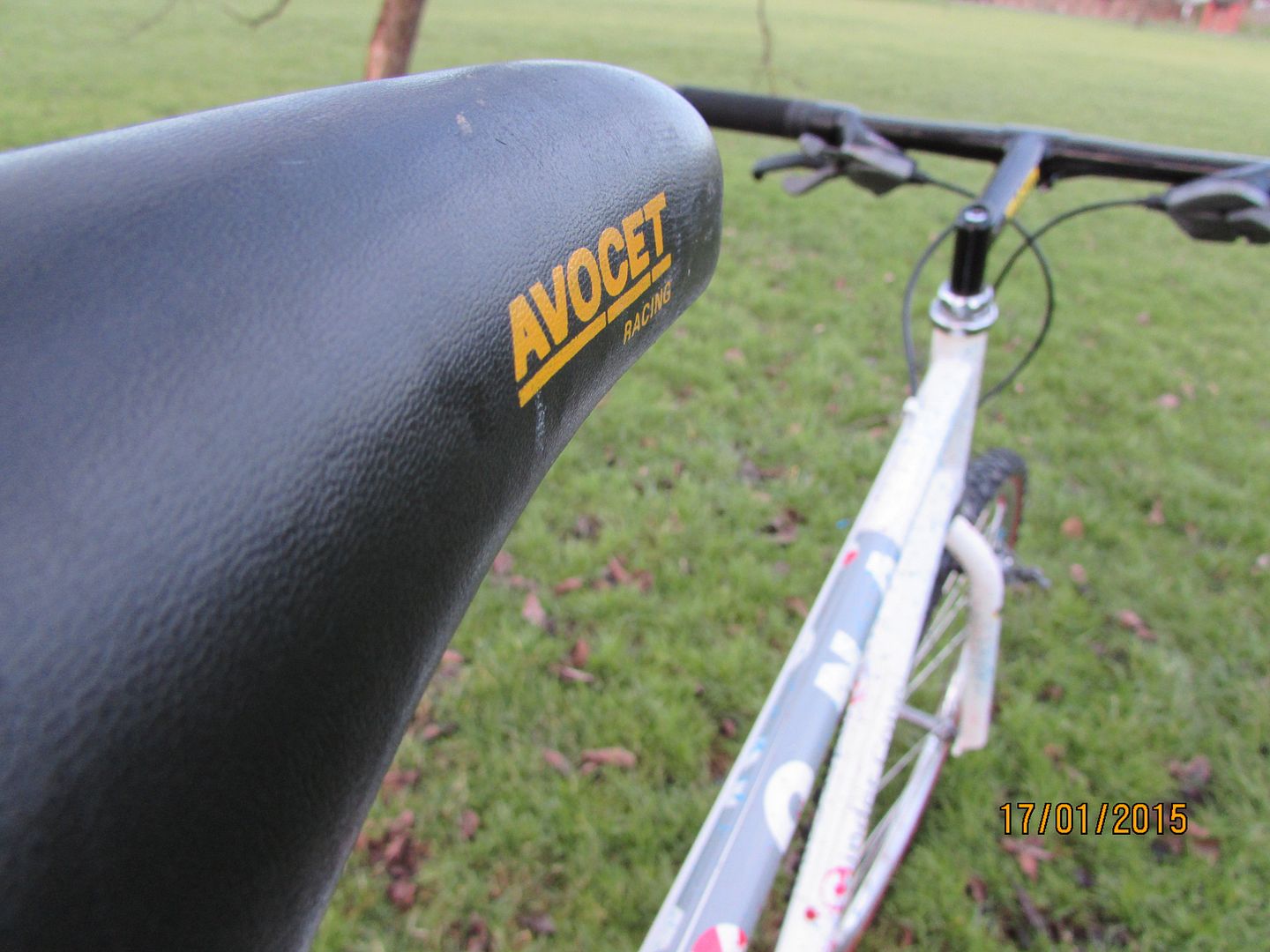 Taken just before the Surrey Hills ride ....before the heavens opened and down came the rain

And what a lovely ride that was in Surrey , eh ?

I love those Contis Wish I could find some myself :roll:

And what a lovely ride that was in Surrey , eh ?

I love those Contis Wish I could find some myself :roll:

Aside from the Headset coming loose and the forks almost falling out, the only abiding memory I have other than the rain,
is cramming into the corner shop at the lunch stop and standing under the heat curtain to get warm whilst the rest of the crew crammed into the Bus stop.

Actually I have another

Parking my Kona shod with 1.5 tyres next to LetmeTalktoMark's 29'er with wide tyres
looked like a Father and sons outing

I was in the bus stop, watching all the wet roadies going past !

Just before we rode up the river road! :shock: Well at least it cleaned the tyres

Looks like my Golf parked up next to you too

Nice the little extra touches like the spoke nipples and water bottle bolts really add to it but blend into the splatter paint scheme at the same time.

Gotta love a bit of Suntour XCD - they only did that group set for one year.

Gotta love a bit of Suntour XCD - they only did that group set for one year.
Click to expand...

Thanks for the thumbs up Adrian

its been through a lot this one, but luckily came out the other end with only a few battle scars, Graham Foot had it in his workshop for a while whilst he re-tensioned the spokes after I swapped them out
If I'm honest I've always been a disciple of all things Shimano, so running a Suntour set up does bring a new dimension to my growing collection, aside from the levers that were pretty chewed up by mice the shifters were ruff and I chanced upon another Identical set that are molded/shaped around the bar 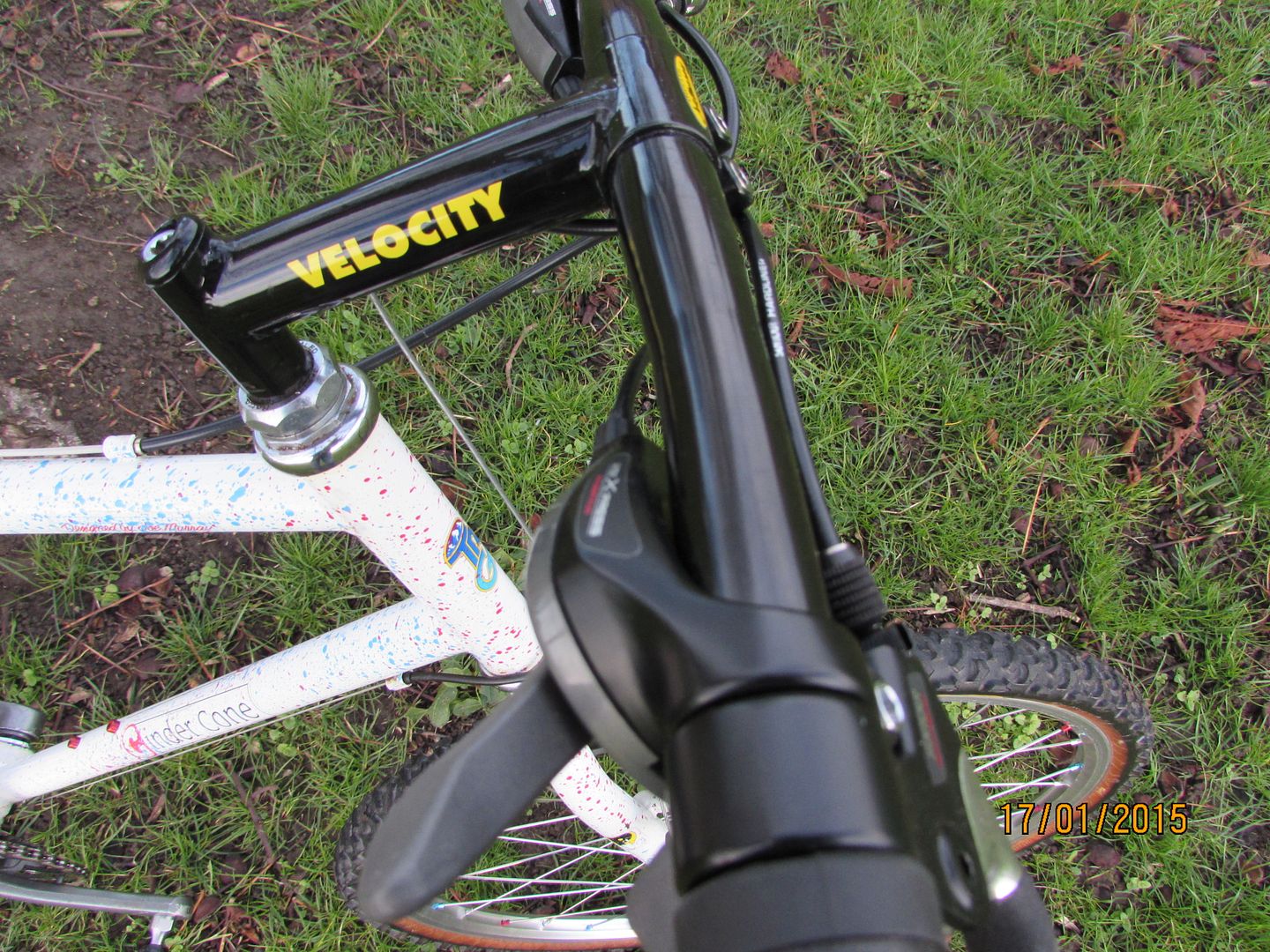 jimo746":1raxf2jy said:
Nice the little extra touches like the spoke nipples and water bottle bolts really add to it but blend into the splatter paint scheme at the same time.
Click to expand...

Thanks Jimo
I must confess it pulls the build away from being catalogue correct, but I couldn’t resist adding a little bit of a personal touch, including getting some Blue anodized valve caps 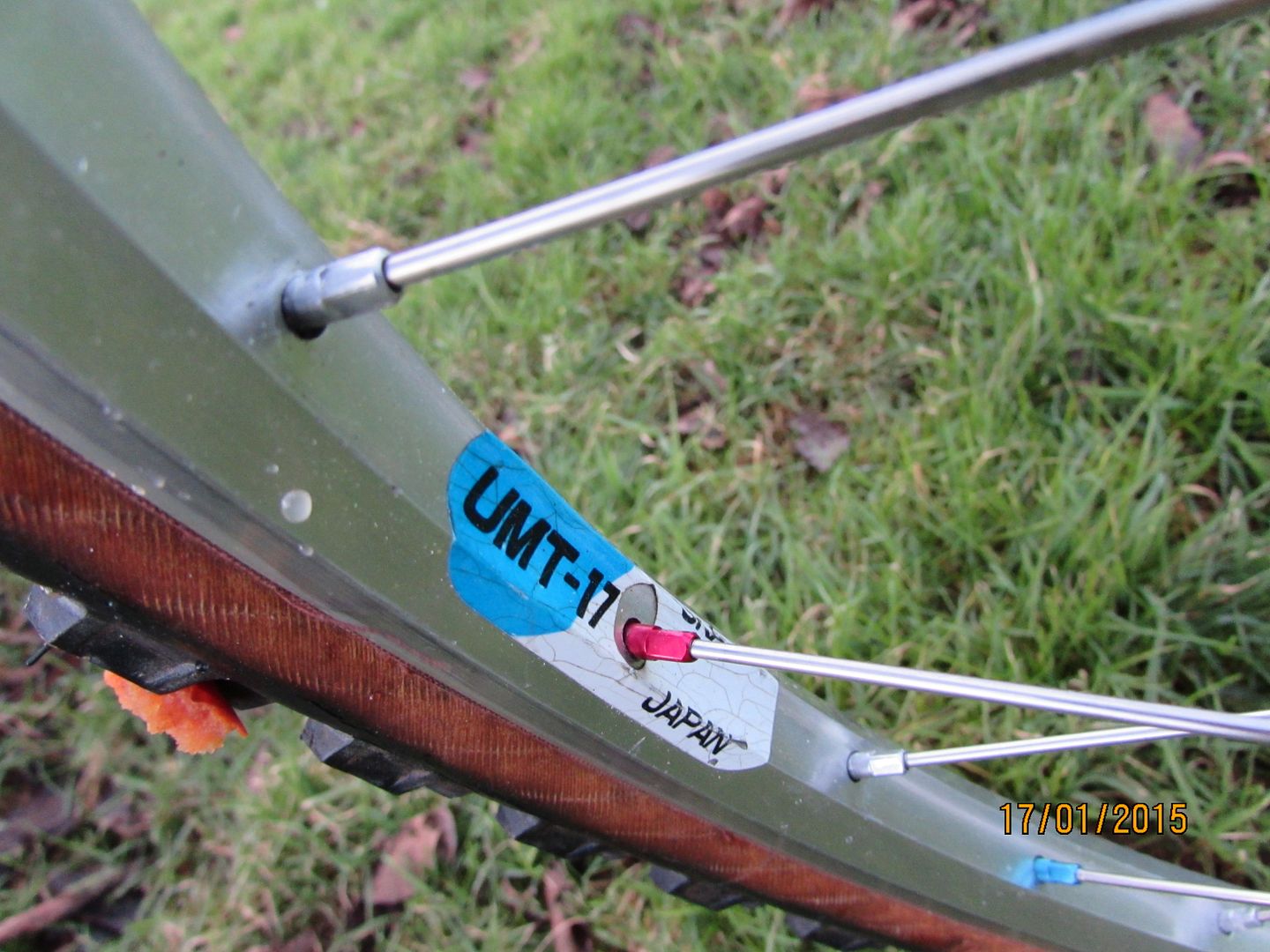