Back in the summer of '89, I was standing outside Boudin's Cycles in St. Helier, Jersey. In the shop front window were two fantastic looking bikes, like nothing I had ever seen before: an Orange Clockwork and a Muddy Fox Seeker. I was mesmerised and was trying to make my mind up which one to get. I couldn't really afford either of them, but had to have one of them! My friend pointed out to me that the rear brakes on the Orange were located at the bottom of the seat post, under the chain stays, and so would clog up with muck and become useless. That swayed my decision to buy the Muddy Fox Seeker. I quite liked the lilac colour scheme with the yellow decals, so different from anything else available then. And it came with a rear wheel disc and a yellow Cosmic Trail frame bag. It cost more than a weeks wages, but I had to have it!

I rode every where on that bike. Loved it. However, in 1995 I was making plans to leave Jersey to head over to mainland UK, to go to universtity, and needed a larger engined motorbike than the little 250cc I had. A friend had just lost his driving licence, had a 1978 Honda CB750F2 in bits in his garage, and needed a bicycle to get around on. So we swapped. I've still got the CB750, and have been hankering to get my Muddy Fox back for quite a while. However, after several years of searching and asking around, there's no sign of it.

There's been a lovely restored Seeker on eBay for a few months, but too expensive for me (£300+). Then a few weeks ago one popped up on eBay with a starting prive of £19.99, and I managed to get it for £34, which, considering the condition it's in, seemed very cheap. The seller had listed it as For Collection only, but after several emails he agreed to wrap it up and put it in the post, which cost £32 by ParcelForce. It's all original except for the seat and tyres. There's only a few marks on the frame. A few rusty screws here and there, but they are easily replaced with stainless steel versions. I took some photos of it when it arrived, but unfortunately my Nokia Lumia developed a fault and I lost all the photos on the SD card before I could transfer them to the computer. The only photos I have of the bike before restoration are from the ebay auction page: 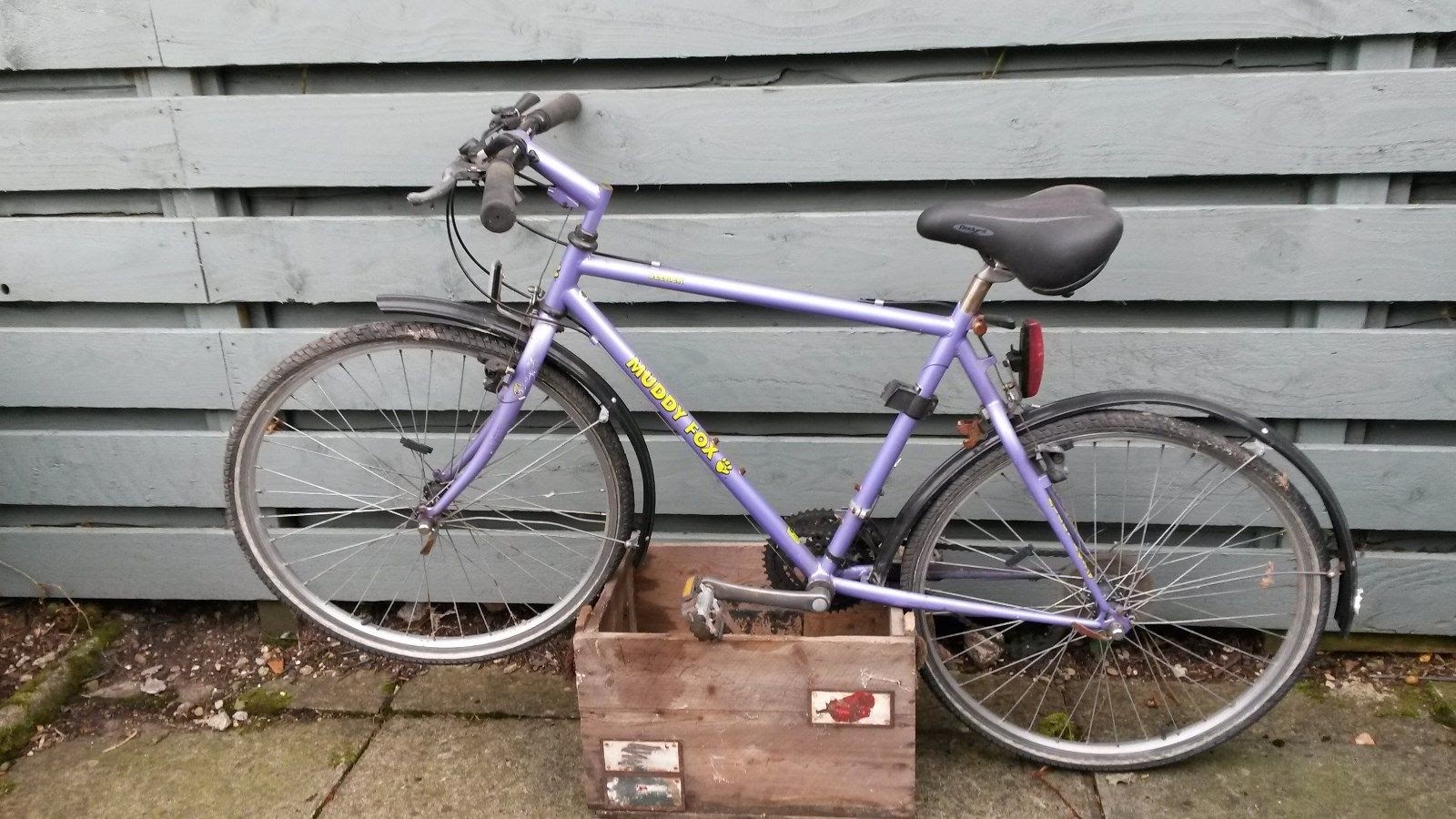 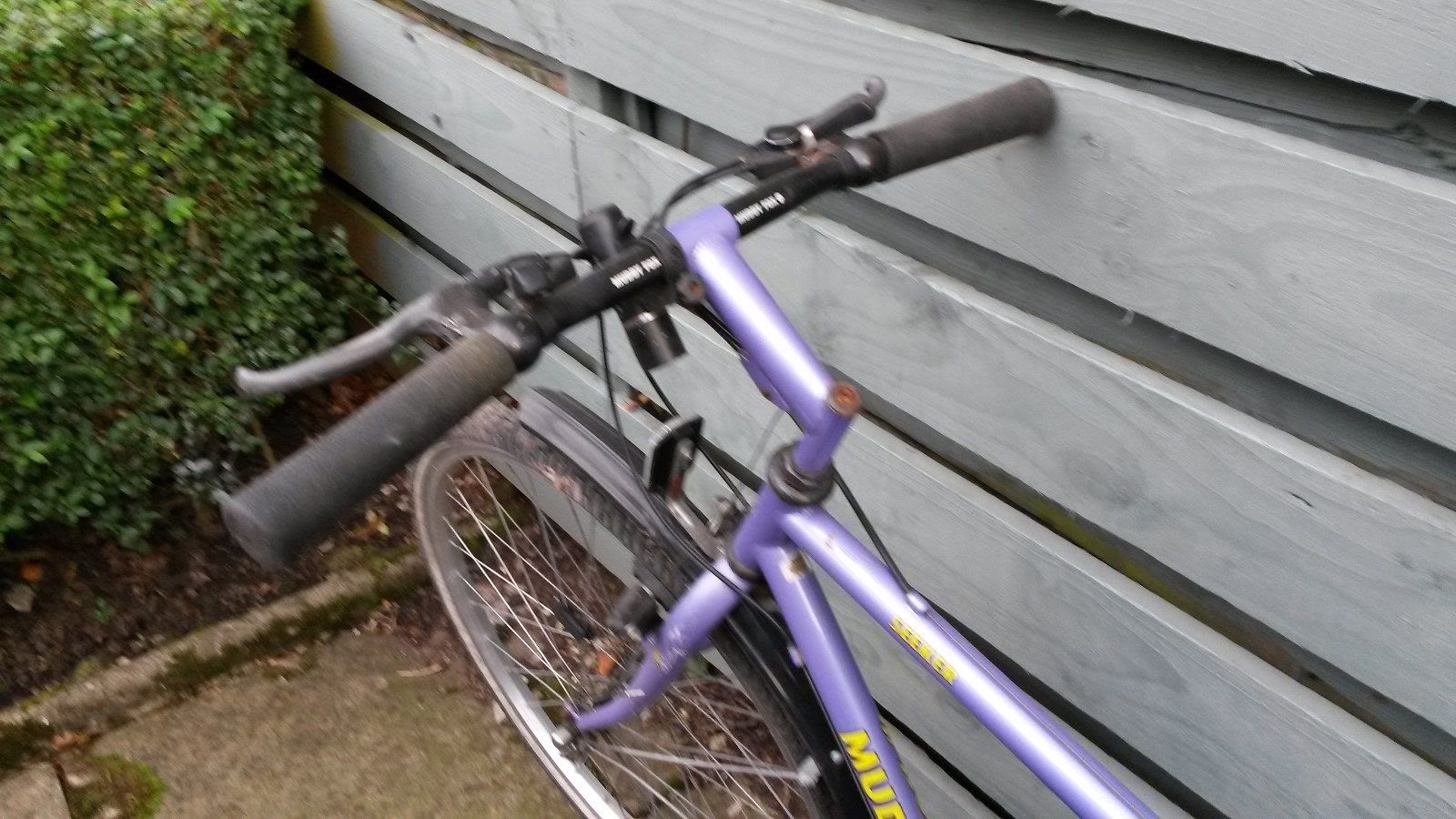 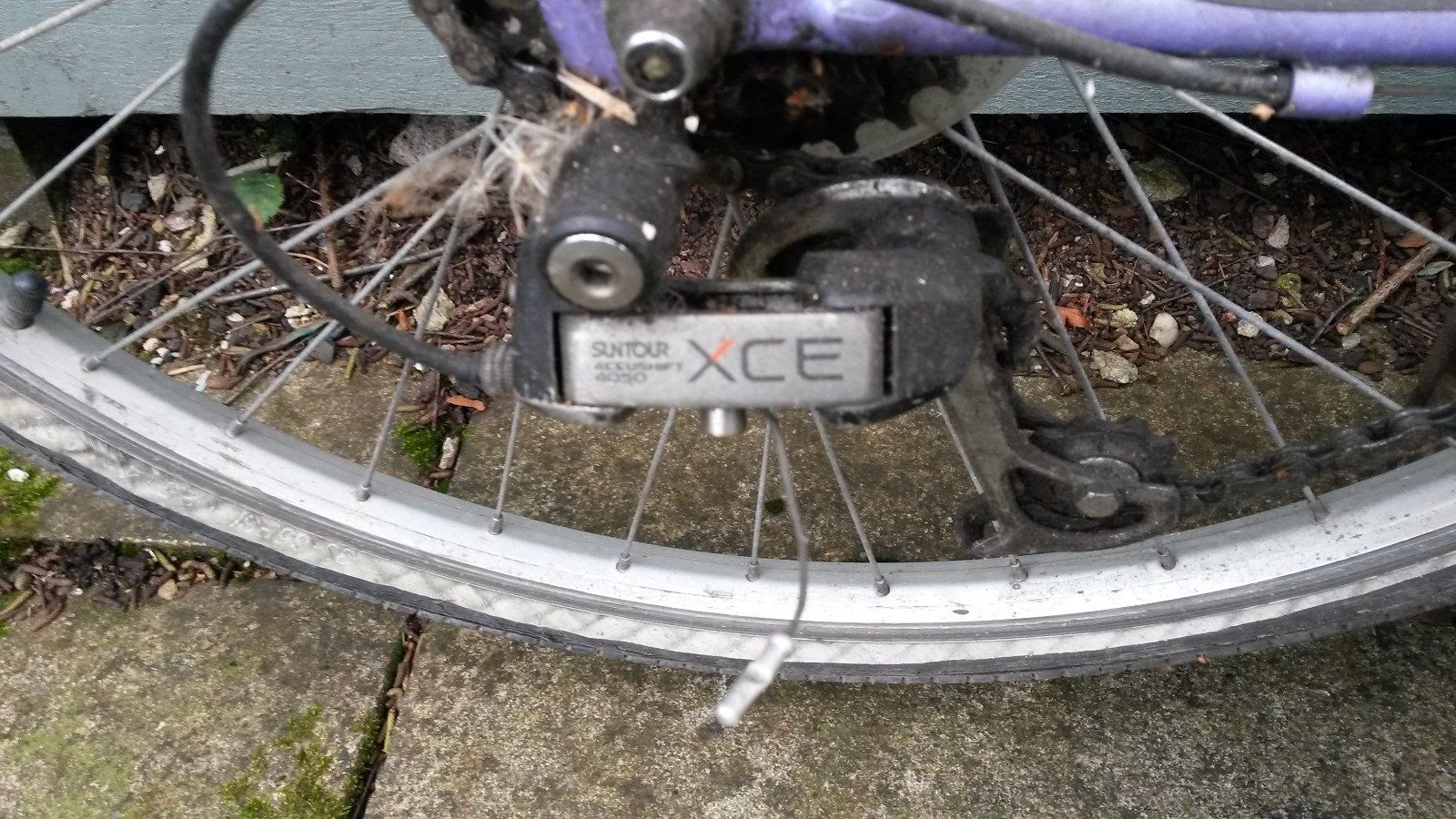 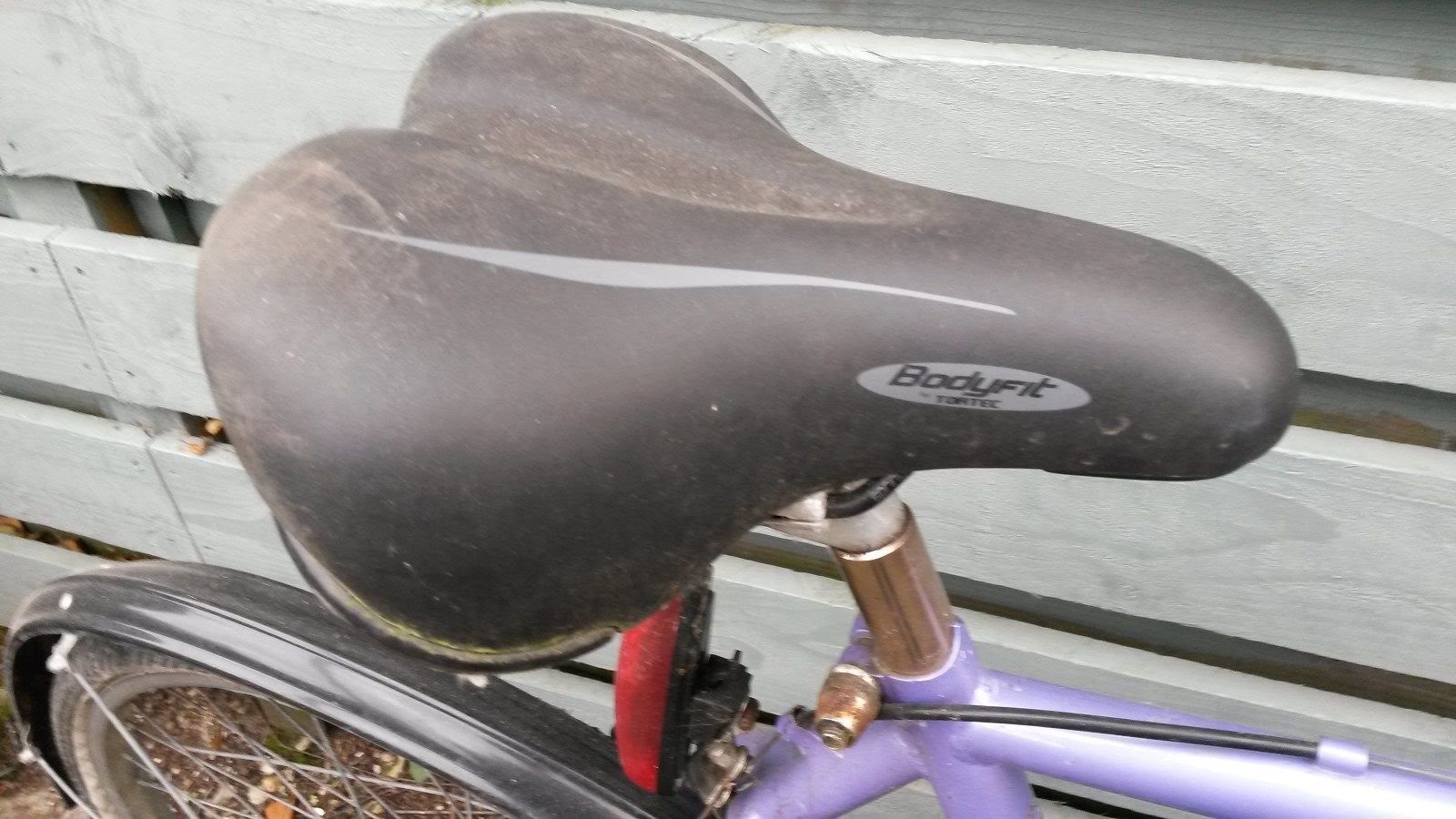 Once the bike arrived I stripped it down, cleaned all the parts and replaced any rusty screws with stainless steel ones. The crank and bearings needed replacing, as water had seeped in on one side and rusted that side of the crank and bearings. The wheel bearings got cleaned and re-greased. The freewheel sounded dry and dirty when it was spun, so I took that apart, cleaned it out and re-greased. The chain and gears needed a good clean, and I am amazed at the condition they are in: no rounded teeth and the chain still fits snug. I removed the old tyres and rim tapes, cleaned and sanded the rims with 400 grade wet & dry sand paper and trued the rims (both tyres were slightly buckled). The pedals were rusty on the metal surround were the paint had been rubbed and scratched off, so I stripped them down, sanded and sprayed the steel surround with black satin paint, polished the aluminium and cleaned and re-greased the bearings. The frame and handle bars were washed and polished with car wax. All other parts, apart from the rims, have been coated in ACF-50. The grips got a wash with some kitchen bleach cleaner to remove some moss, and they are now looking almost brand new.

And yes I did end up on my knees looking for a bearing. But I did find it!

All in all, it looks like the bike didn't get used much and has been left sitting in a shed for a long time.

I managed to get some tyres that are almost identical to the original ones that came with bike I used to have, from ebay: a pair of Duro 26 x1.75 amber walls and inner tubes for £21.99. 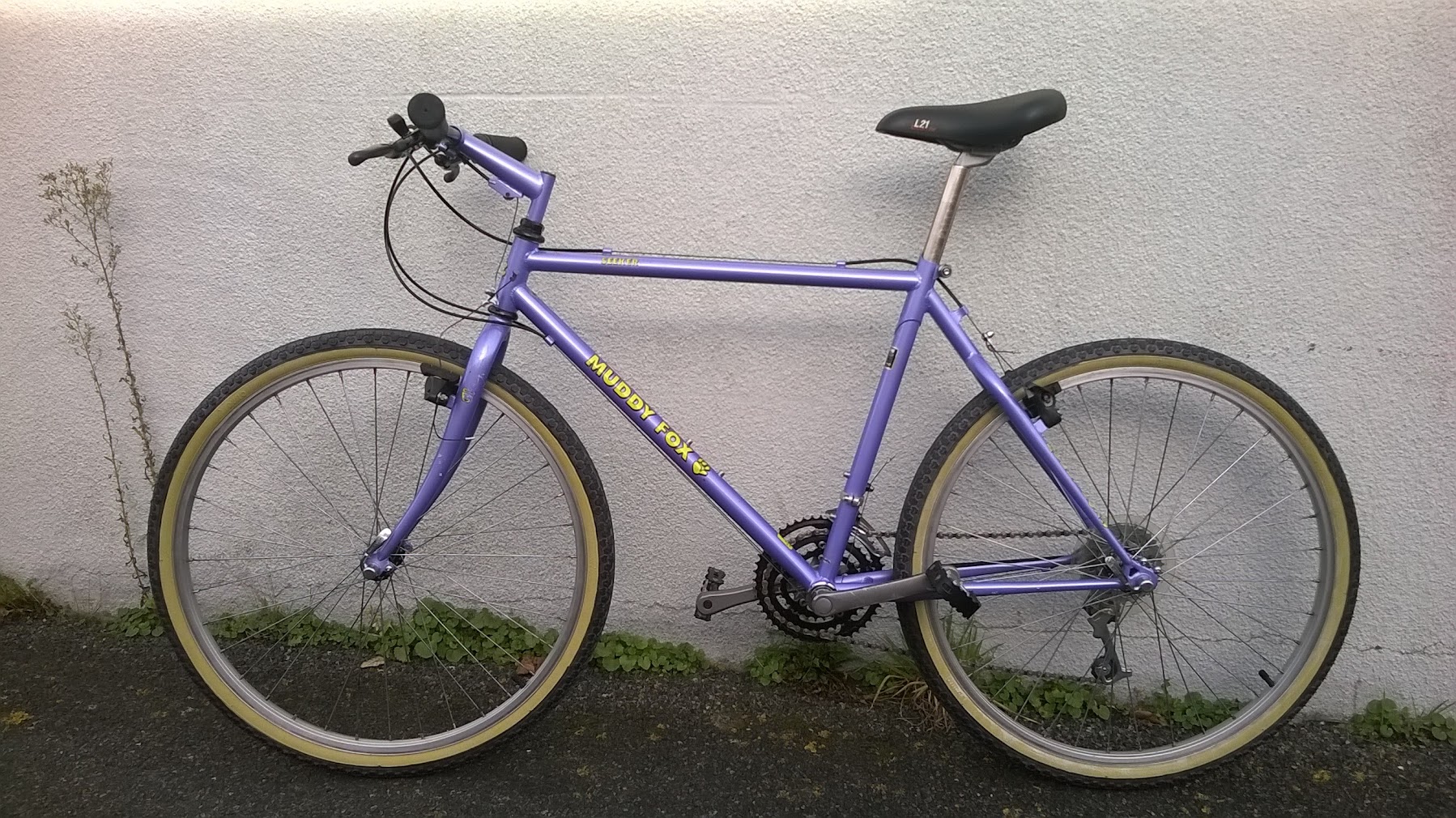 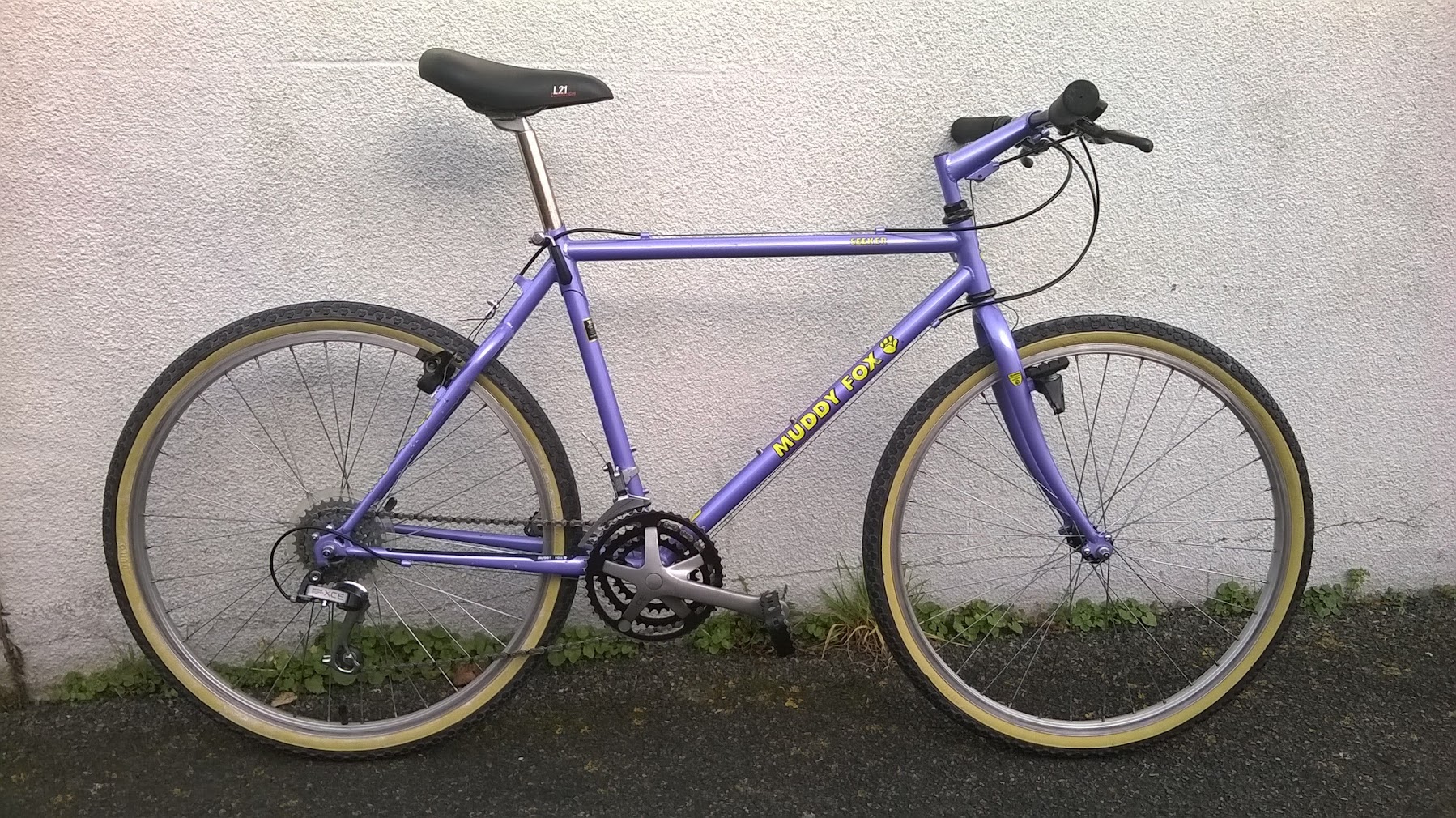 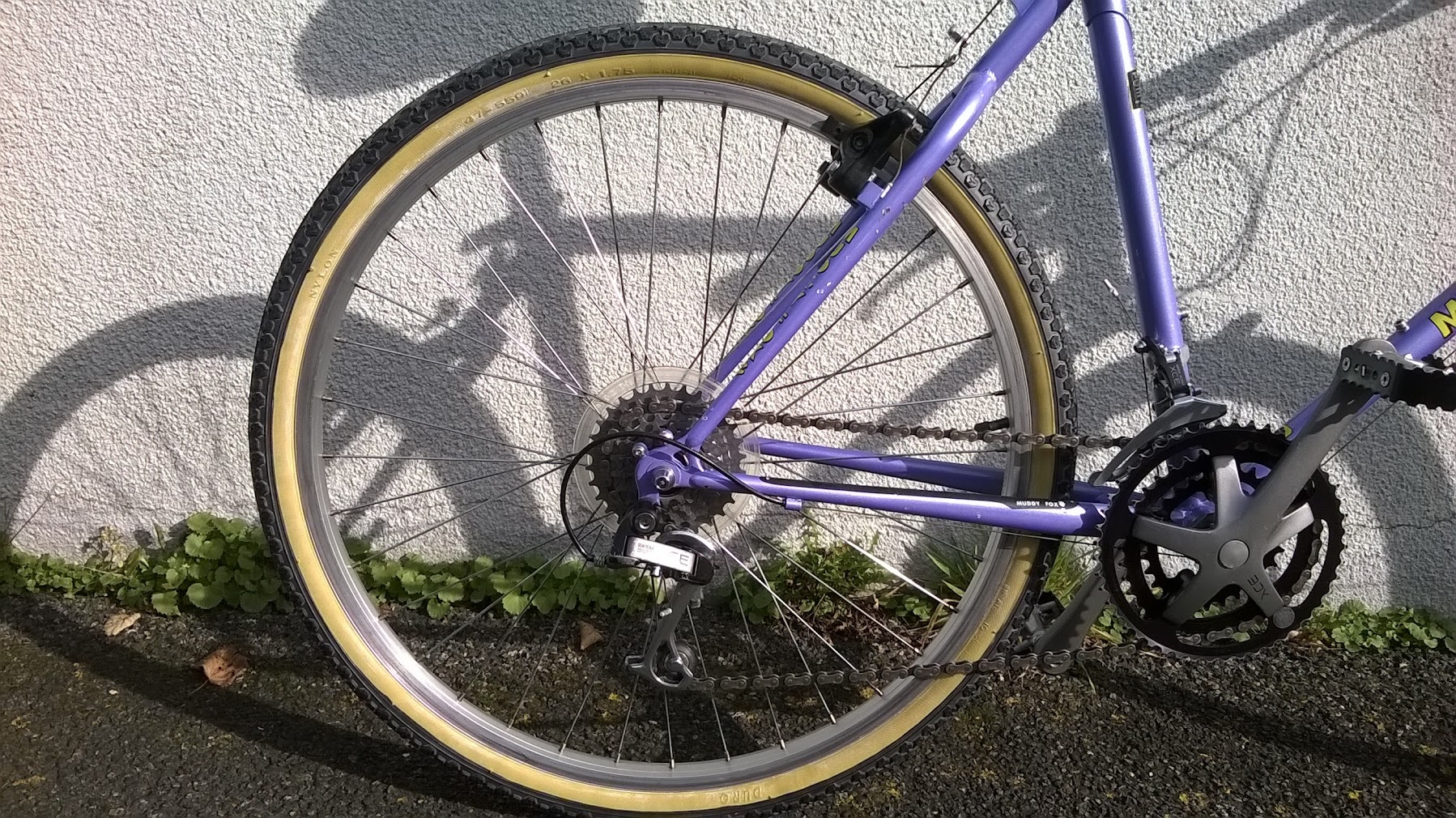 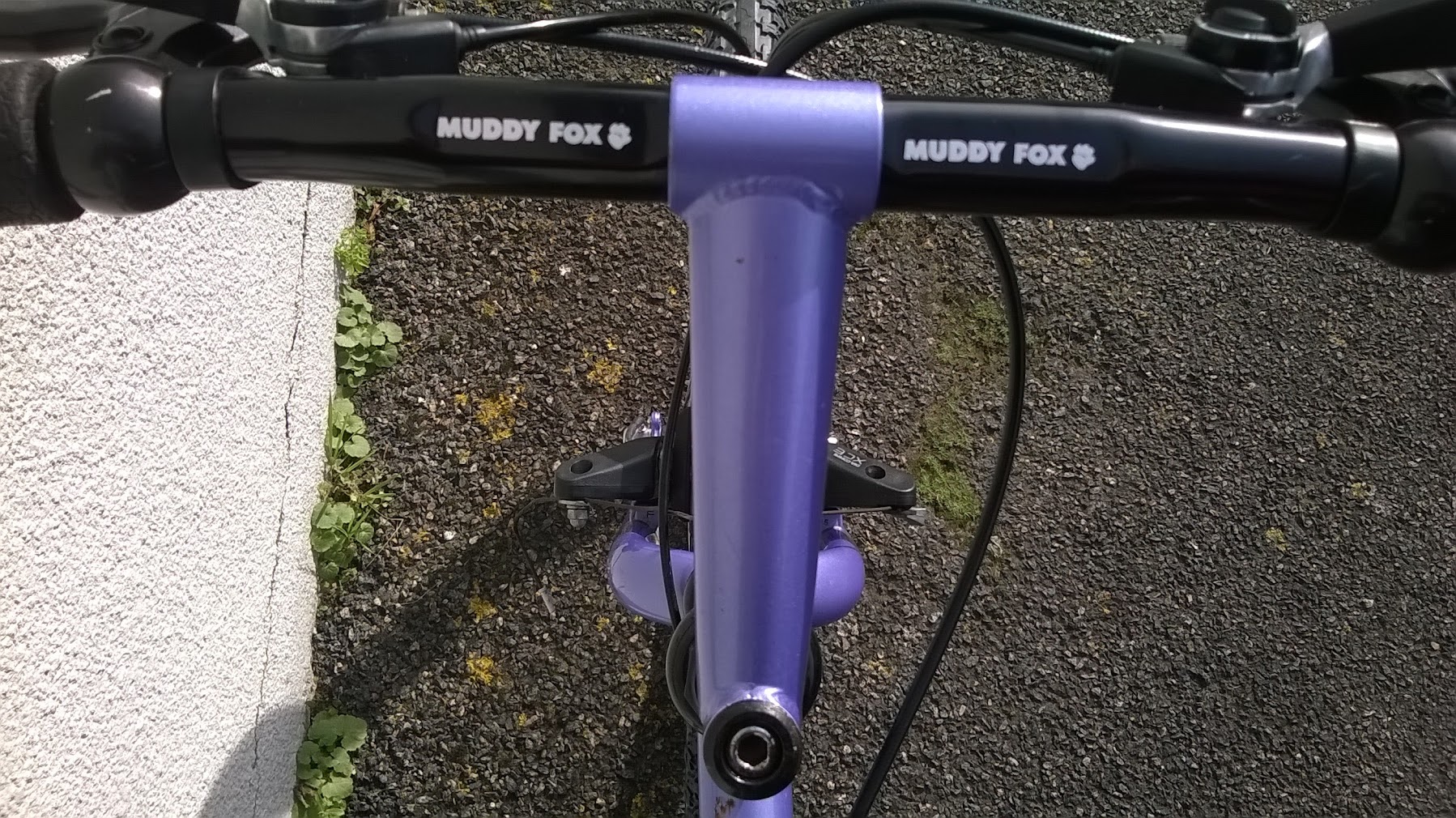 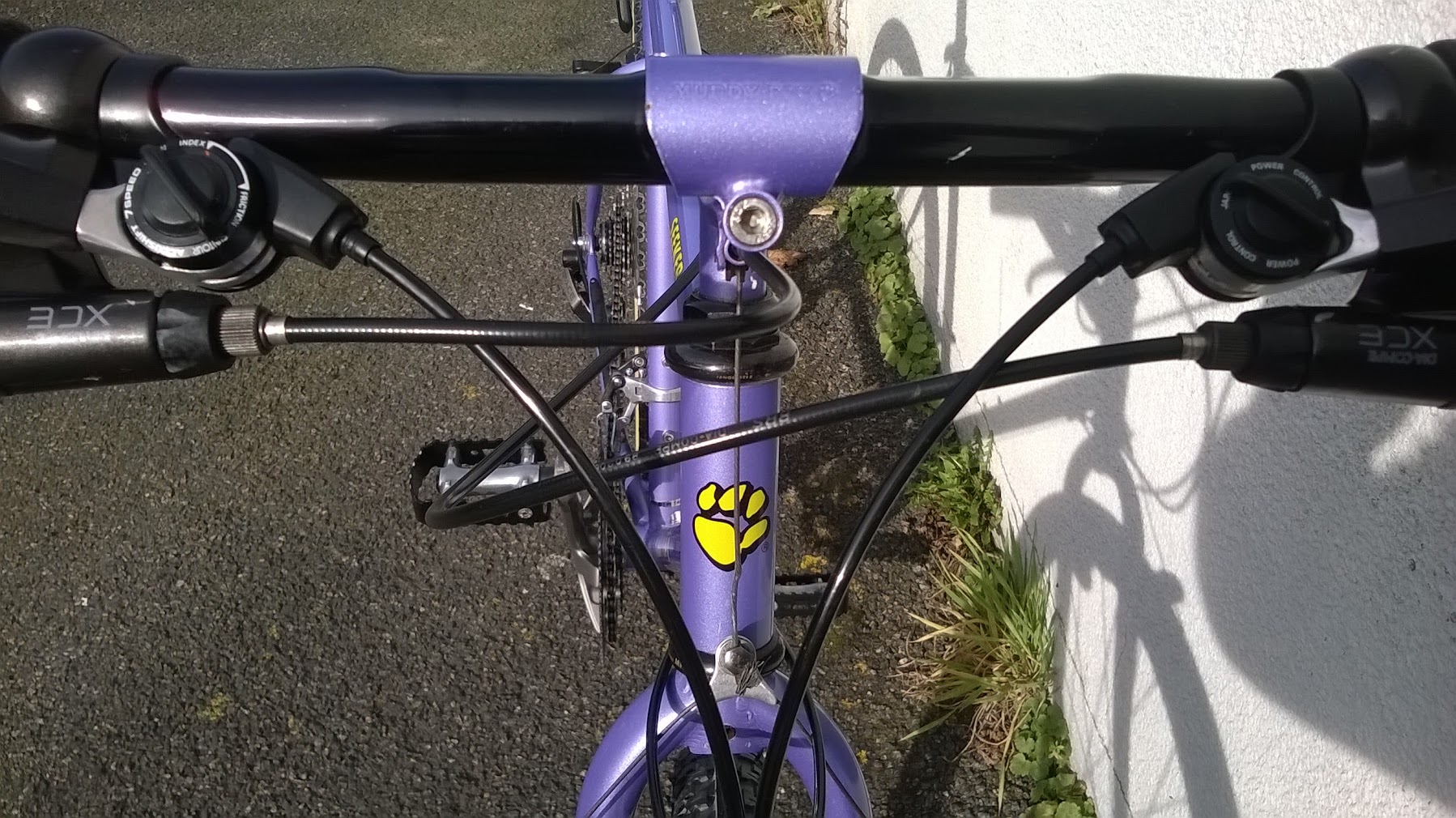 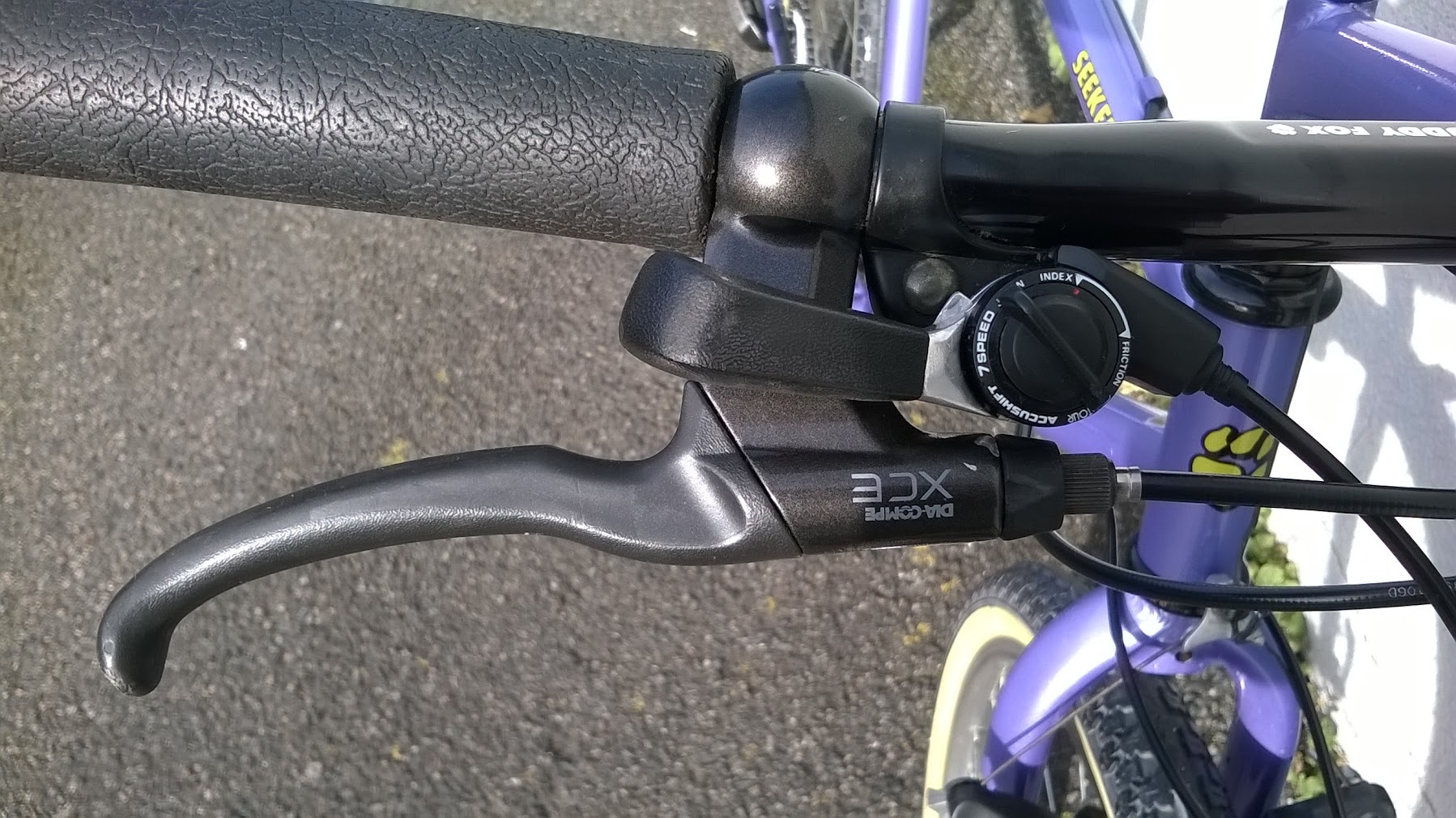 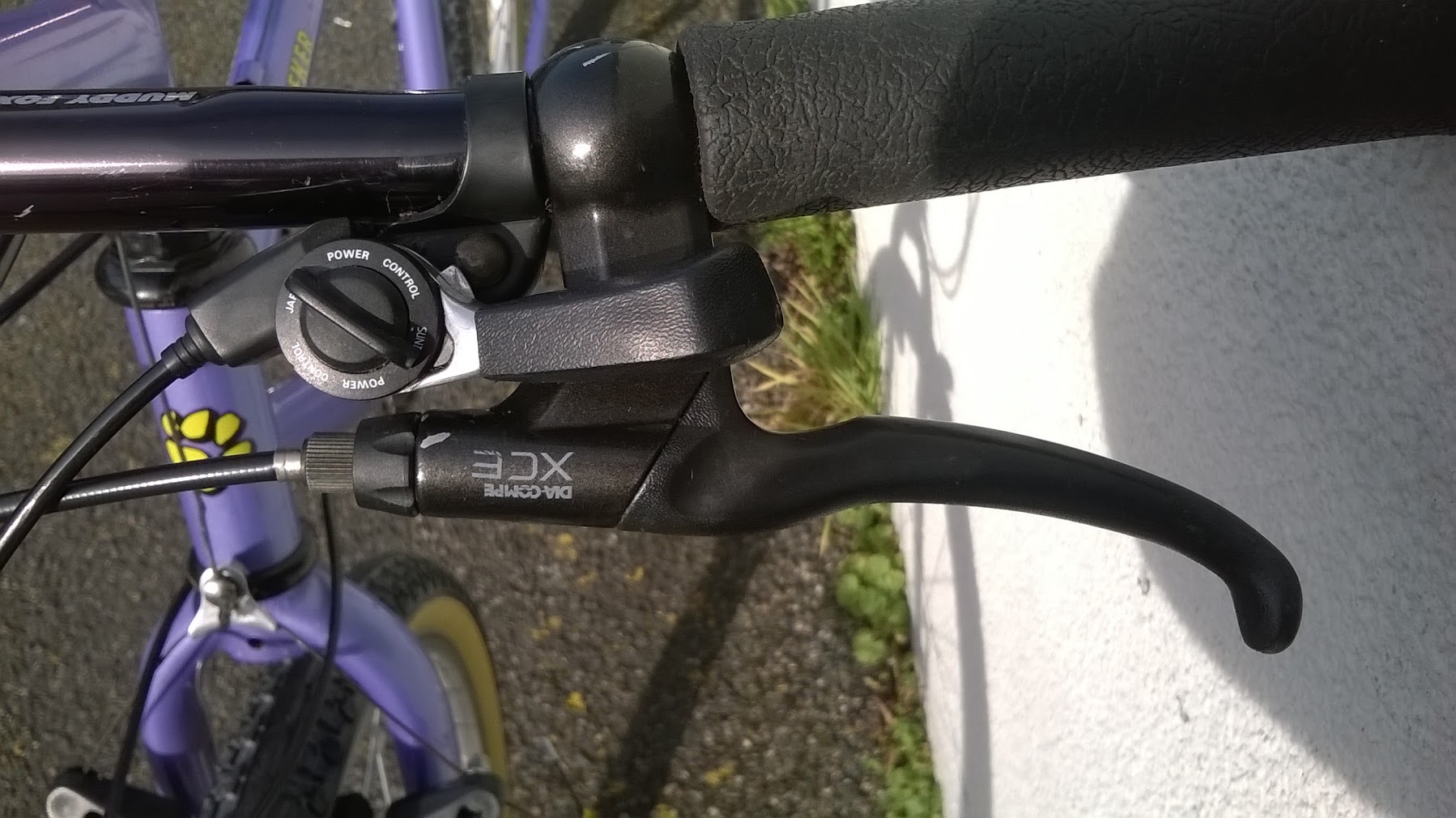 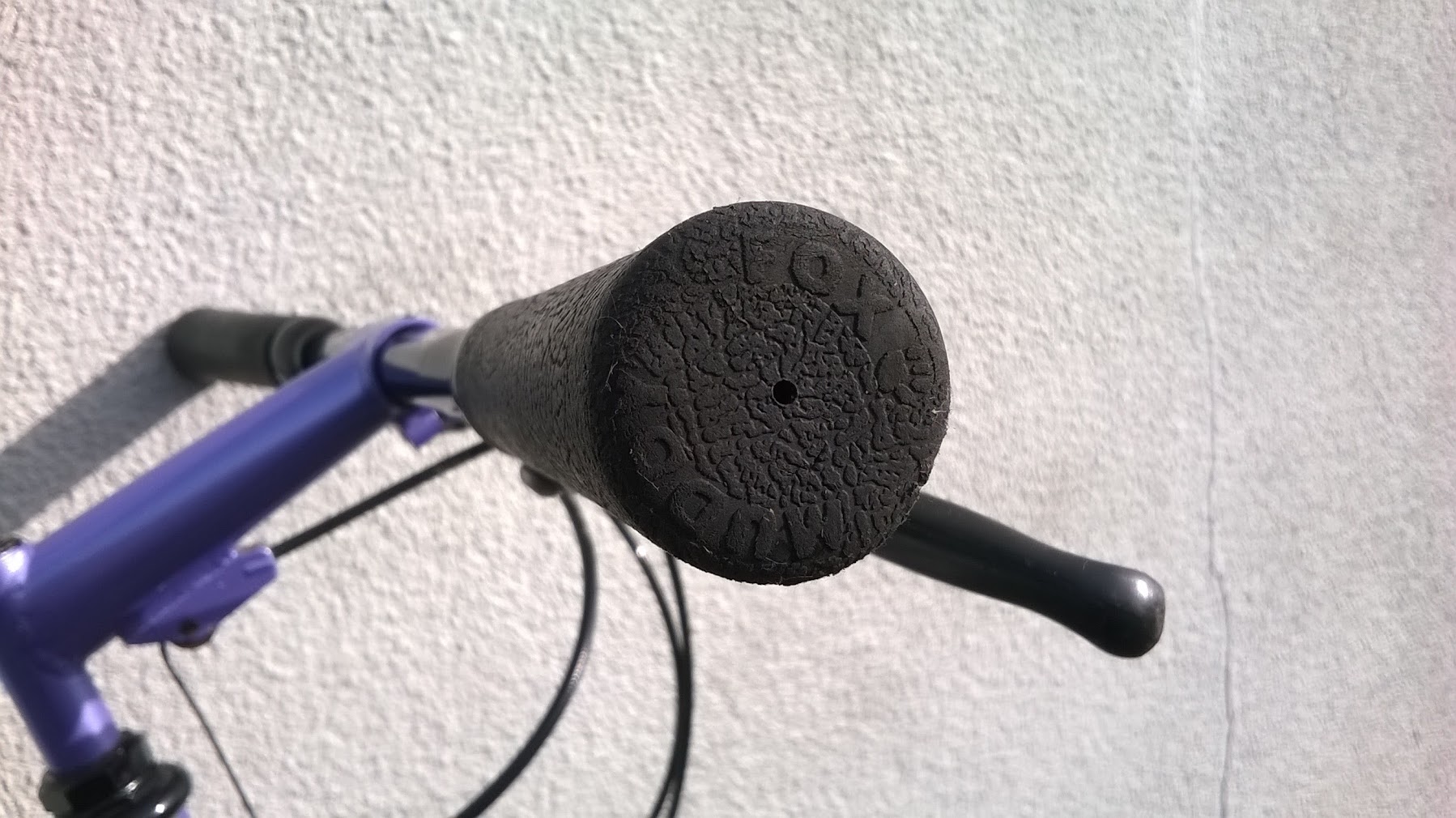 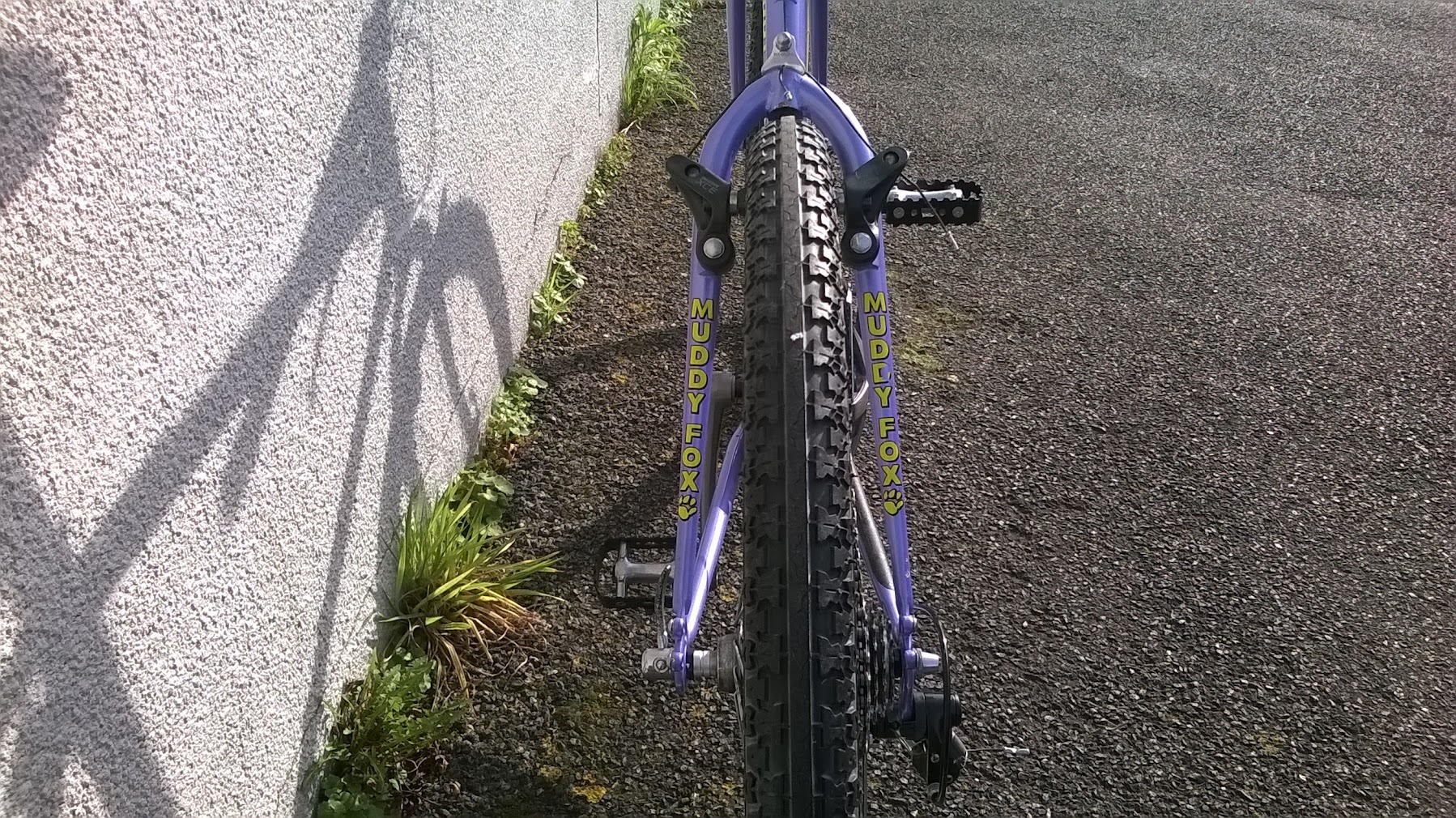 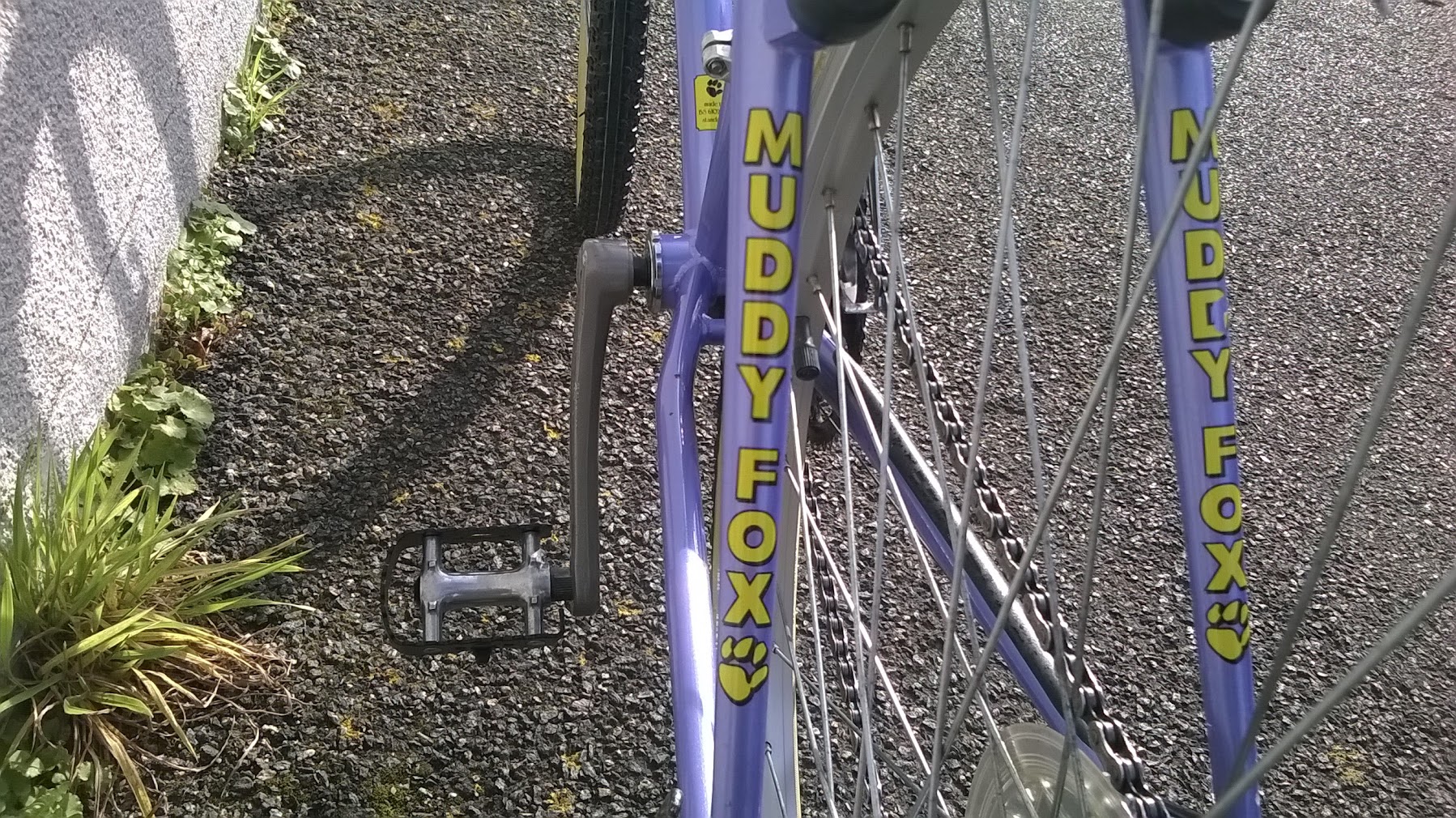 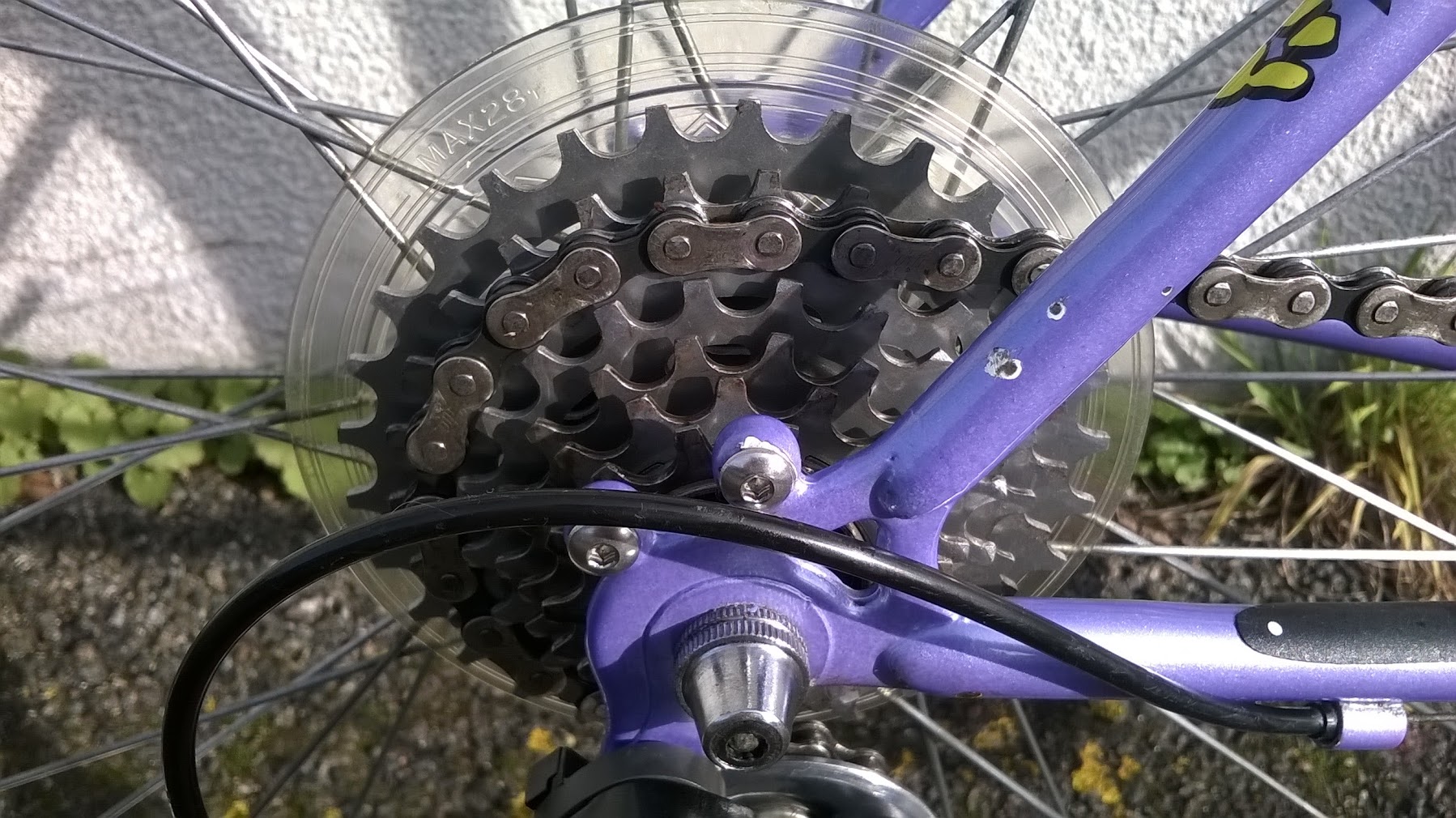 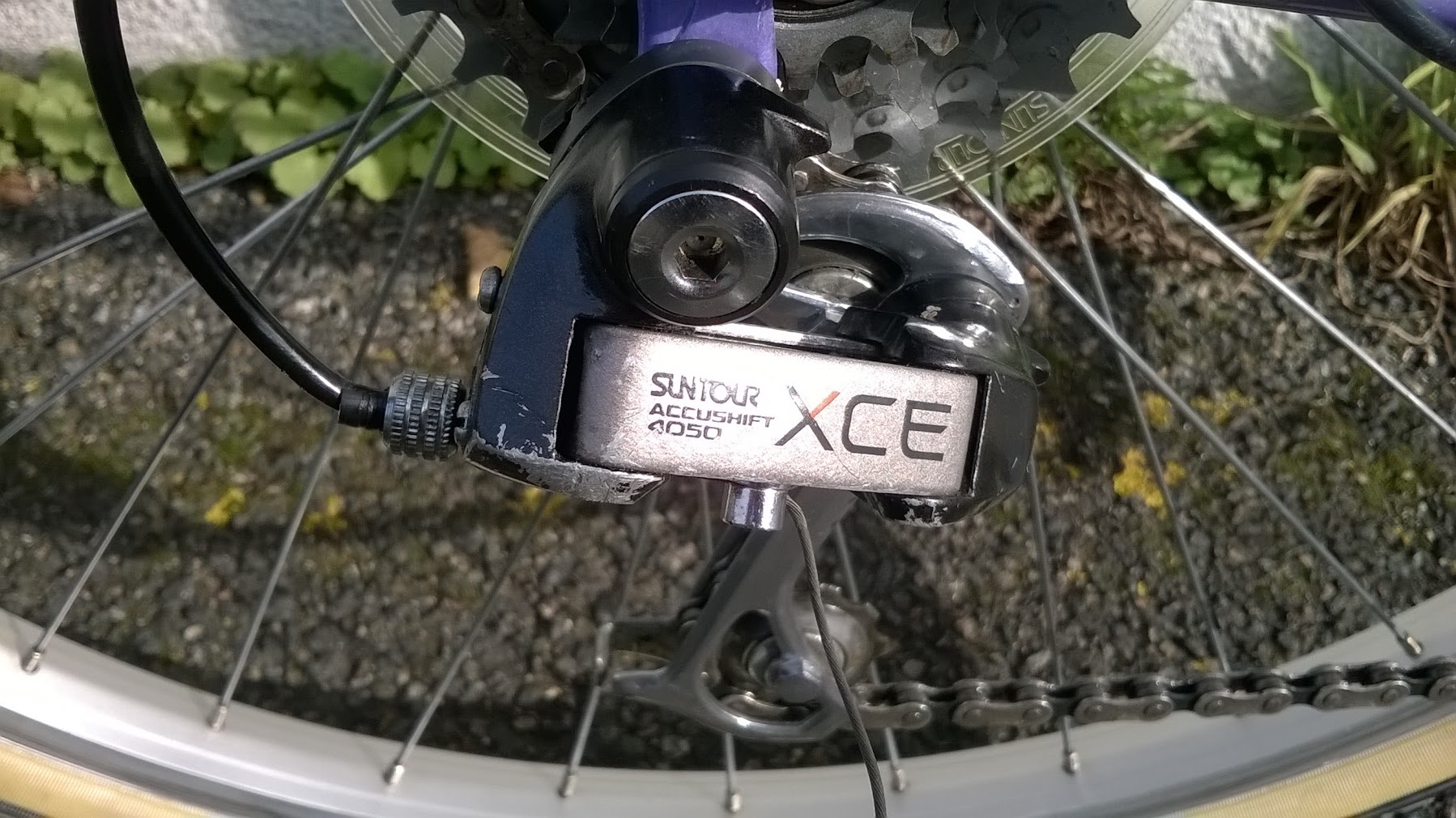 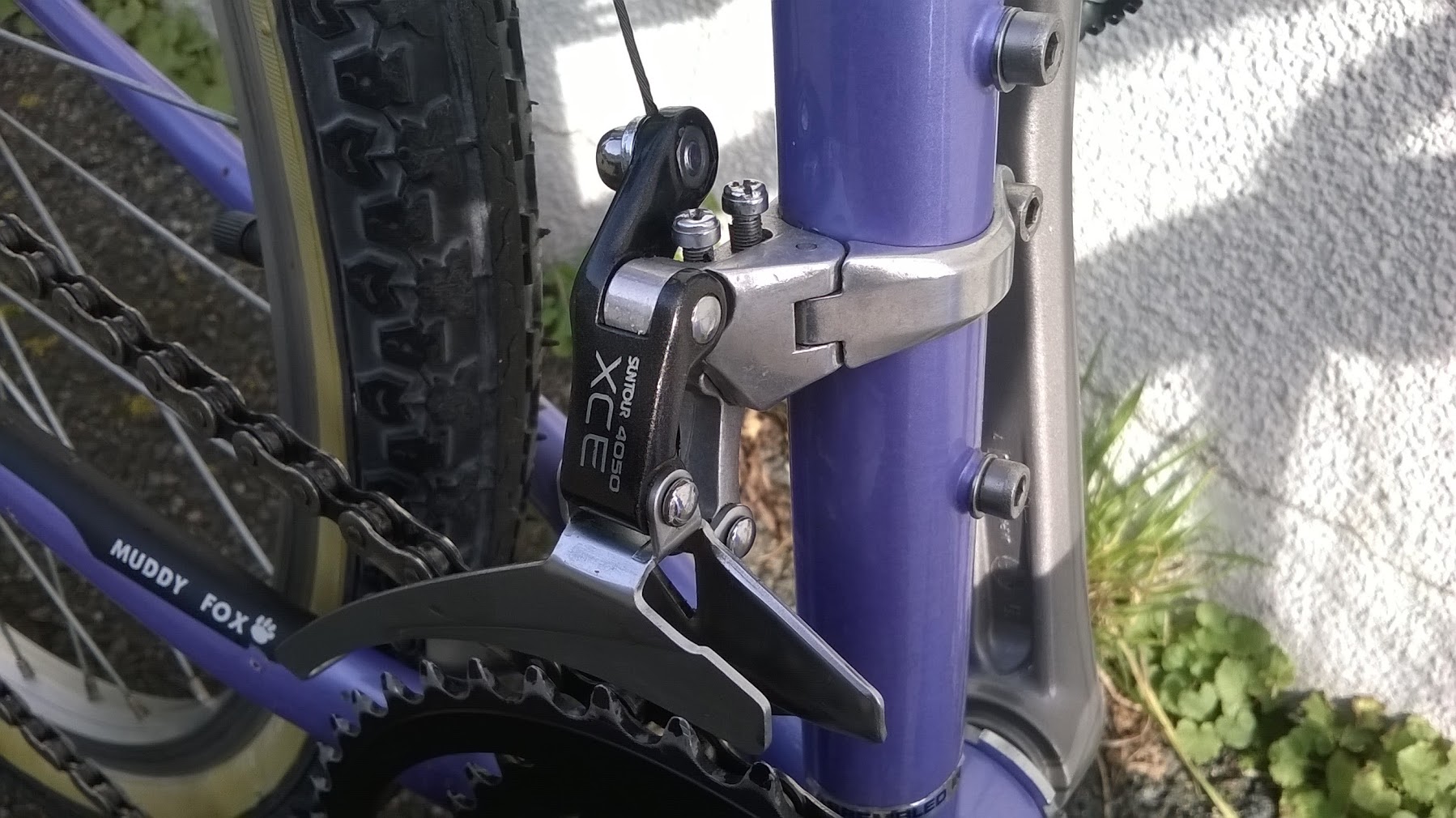 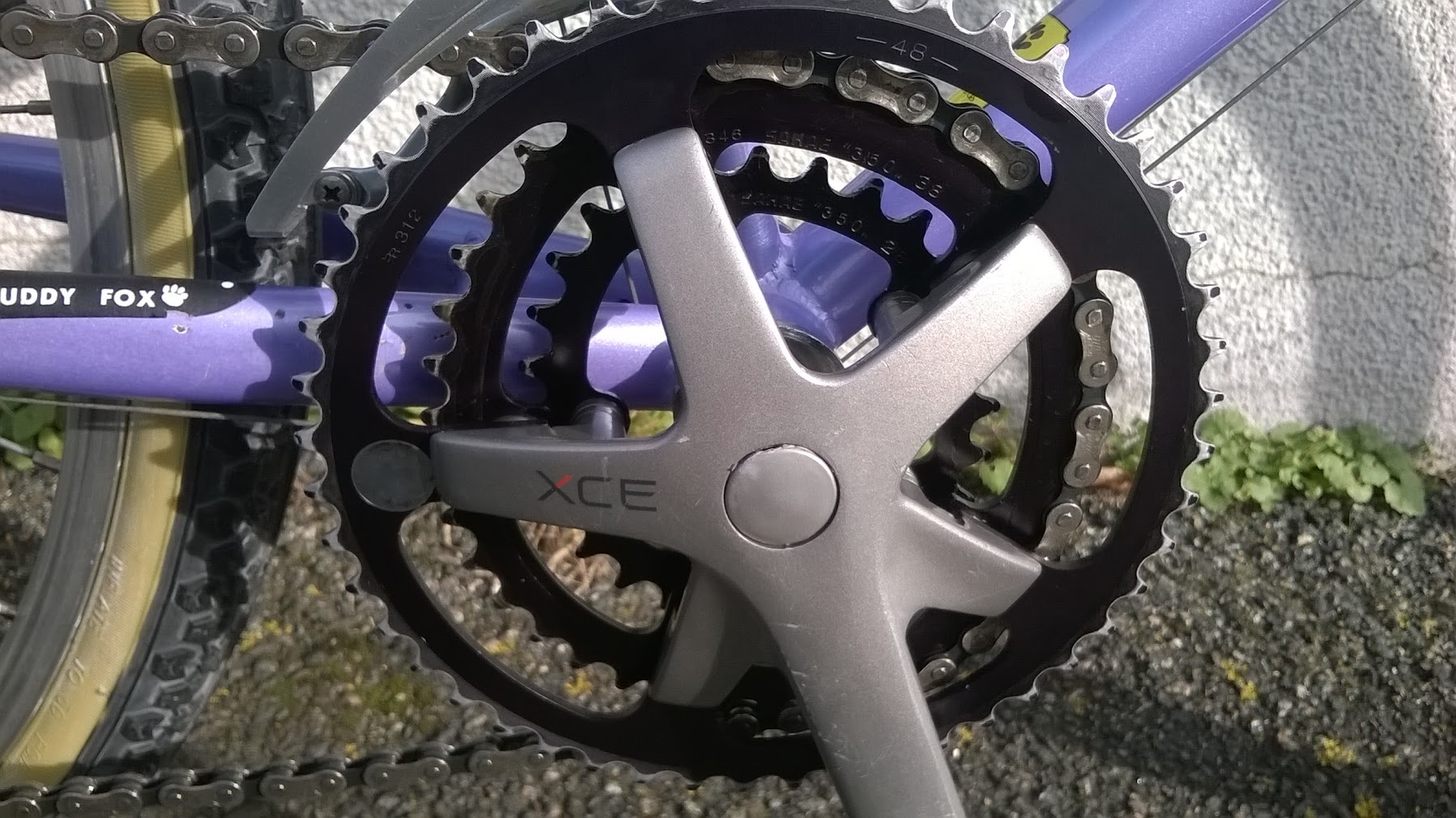 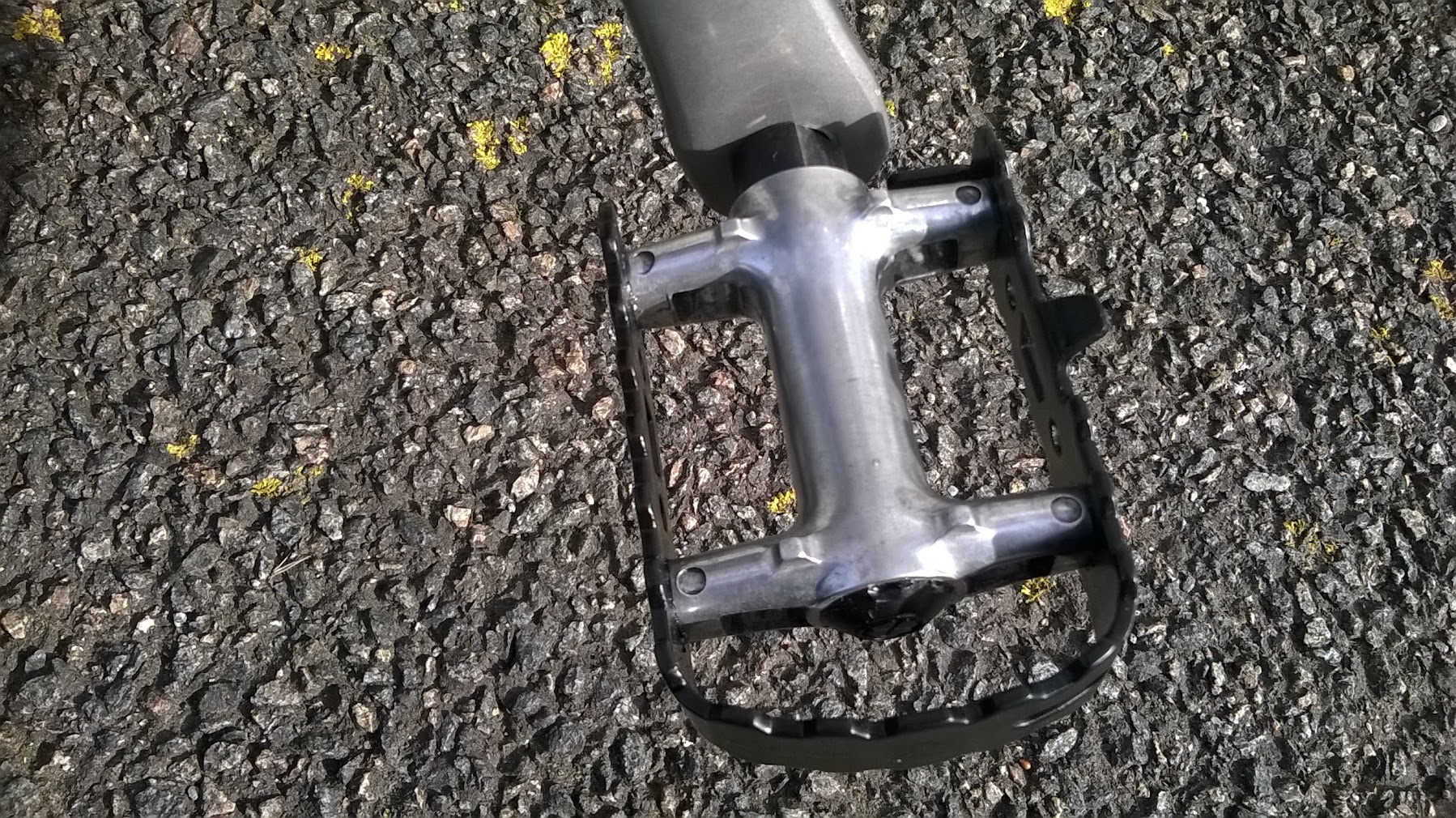 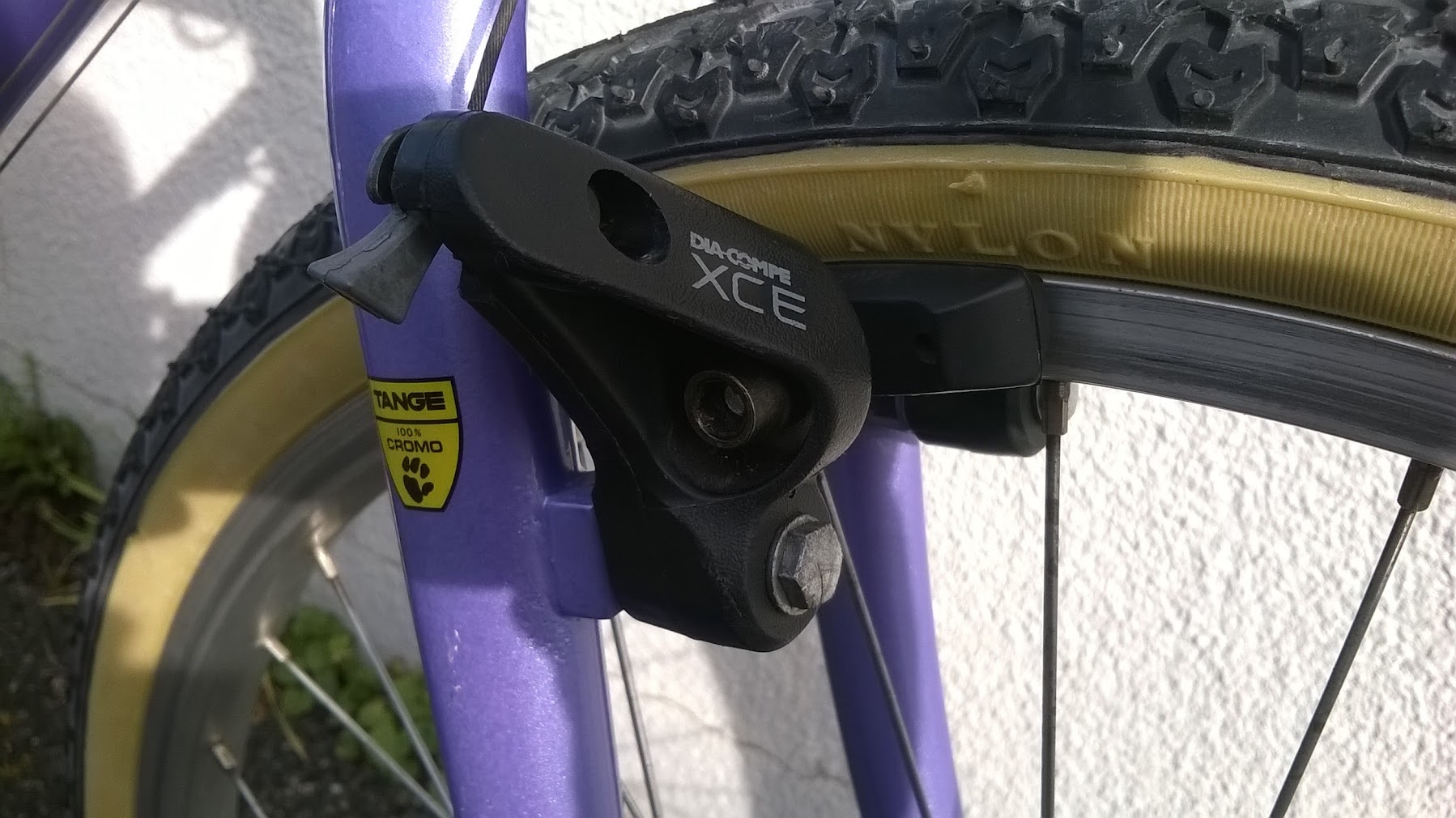 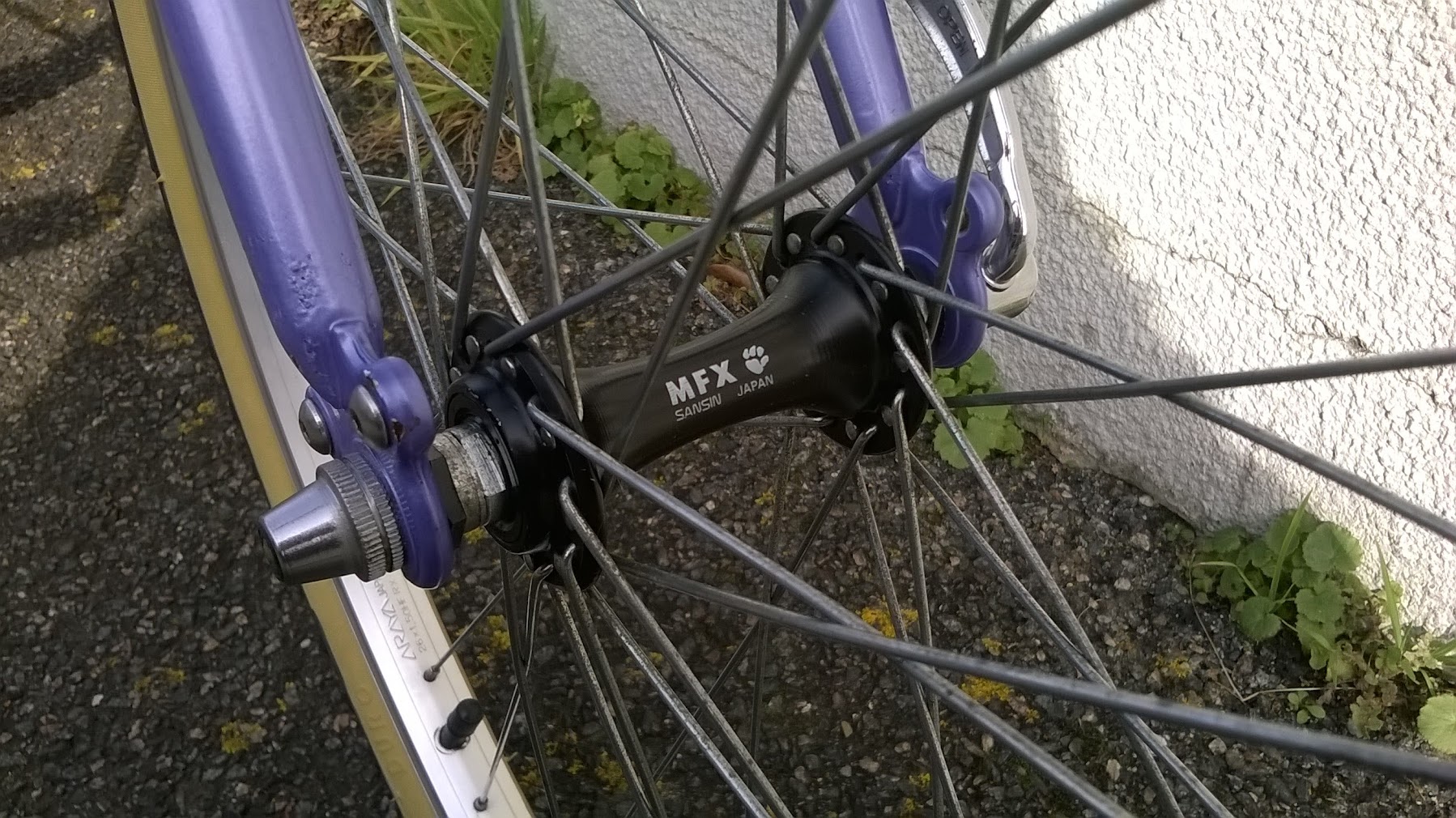 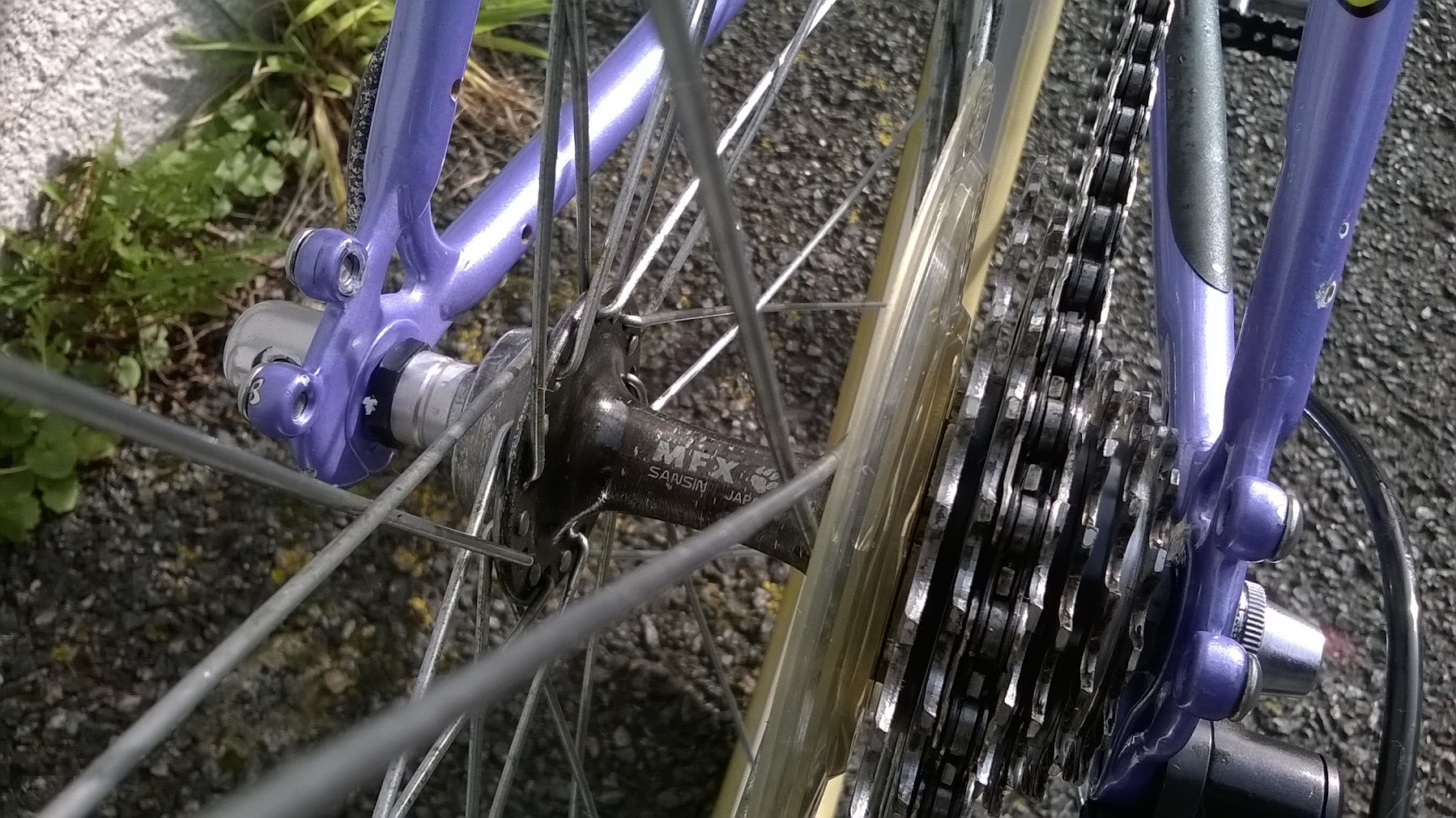 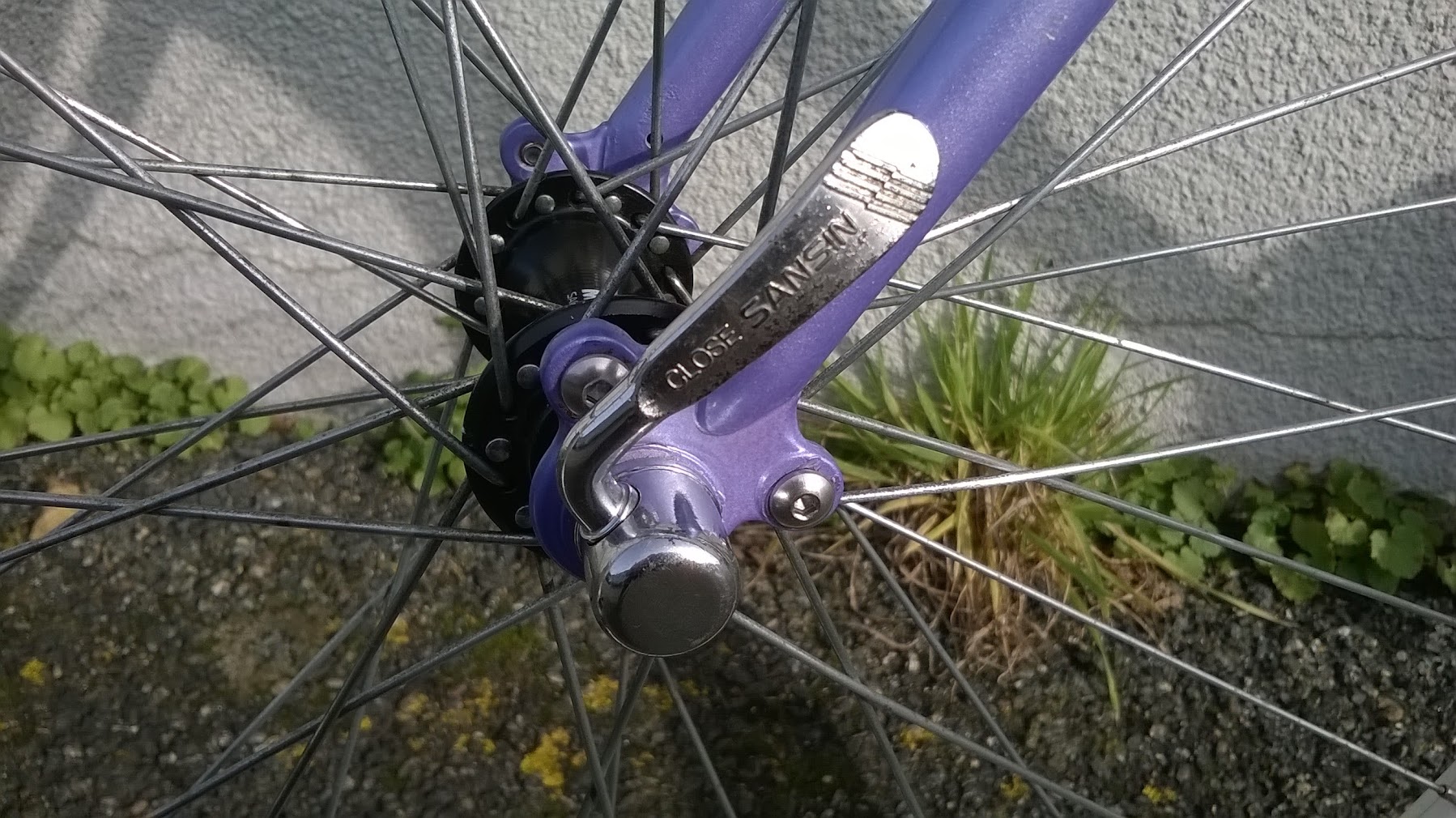 I've got a small Schwalbe saddle bag on order. I have also got a lilac bottle cage and yellow bottle on the way too. The cage and bottle are almost exactly the same as I used to have. At some point I'll get some paint to touch up the frame.

All I need now to get the bike exactly how I used to have her, is an original Muddy Fox seat and rear wheel disc, and a Cosmic Trail frame bag.

There's a seat on eBay, but the seller is asking £52. Is that a fair price for one?
I've been searching high and low for a rear wheel disc, but can't find one. Unless anyone here has one for sale, I'll make one. I've seen some instructions on the internet for making plain ones. I guess I could make one using yellow plastic, and make some stencils and spray the Muddy Fox logos on.

As for a yellow Cosmic Trail frame bag, I guess that's going to be nigh on impossible to get, seeing as the company went bust years ago. This is the next best thing I could find: https://www.ebay.co.uk/itm/TRIANGLE-TOO ... 1438.l2649. What do you guys think?

The bike is now in my lounge so I can look at it and admire it. Once I've got all the other bits i'll be taking her out and getting the Muddy Fox muddy

Now THAT's a clean build. Hats off to you sir! It looks 'right' I don't know how to elaborate on that, but hopefully you'll know what I mean.

1989 was a great year for MF, the bikes ride well and are comfortable. There were still some of the nice touches on the frame like the paw print on the seat tube lug although made in Taiwan it's before the cost cutters took real hold and the frames lost some nice touches.
Although i am not riding retro so much these days I'd still have an '89 Sorcerer Pro.

Good story and a great job of cleaning that up. Love the colour too

You should post up some wanted ads in the wanted section, people have allsorts stashed away and are always willing to help if they can

Love it, came out fantastically with all your hard work

These were fitted with an Avocet seat. They do come up from time to time and are OK to sit on but not wonderful. They do suit the look of the bike though. The seller is a member here (second part of the user name on ebay is his name on here) and may well drop the price to a more acceptable level if approached on here if he doesn't have to include ebay fees or paypal fees.

Thanks for all the great replies mates
And thanks for the tip=off about the wanted section Mr mkone. I'll head over there now with my list. And i'll give that chap with the nice seat a shout.

Cheers,
Dave
You must log in or register to reply here.