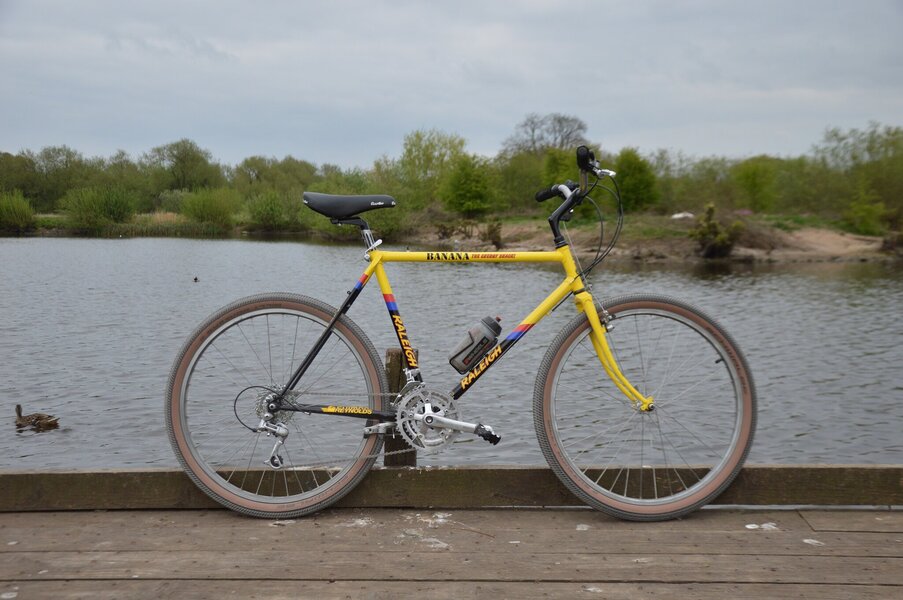 So this is my Raleigh Avanti... or what I believe to be an Avanti. I picked this bike up in 2020 after seeing it on eBay. It had a pretty random paint job but I spied the group and 531 decal and used the catalogues to track down the model. I'm fairly certain, only the Avanti had that specific fork.

Now the bike is a bit of a mystery.
- The Avanti shouldn't have come in a yellow. It's scheme was white and blue. Mine seems to have been a stock yellow with black painted over the top (badly in places).
- It had random decals but the 531 and GoD decal looked to be original.
- The frame number puts it as a Worksop built bike in January 1987.
- One of the "cool" things was an address had been stamped in to the BB shell. Which went out of service in 1991...
- All the "Deore" components should be original and are dated 1988
- It did have some updated components with M732 7 speed hubs and MT62 shifters and brake levers.

Unfortunately. I seem to have lost the original photos from picking it up but I did film a short video;


In that video one of my subs suggested I should restore it as a Banana style bike and it got me researching. Apparently... there were some of these early Avanti's sprayed up and handed out as promotional bikes in the Banana scheme. It's also likely that those bikes originated from the Worksop workshop. It got me thinking - was this bike one of those promotional bikes? I can't tell you for sure but the Banana idea stuck.

I had the bike media blasted to make sure I had a good start and sprayed it up myself. I used a good layer of Etch primer, Montana colours, decals from H Lloyd Cycles and a SprayMax 2K clear. I have to be honest - it was one of my first times using 2K and I layered it on too thick so the clear took ages to properly harden and in some spots, where something has leant up against the bike in the garage there are wrinkles in the paint


All the components got cleaned and polished. I rebuilt the wheels with fresh spokes. Found myself a nice new turbo and some other bits and reassambled it all. I did manage to find the original Nitto bars too, although they're a little spotty with corrosion.

It seemed like such a big bike to look at but it rides so nice. It's more of a comfy cruiser than a performance whip but I'm super happy with how it turned out.

At some point in the future I do want to look for the original hubs (6 speed 105) and original shifters and brake levers (6 speed MT60) but until then I'm happy!

I'll have to double check the specs

Lhatch4 said:
I thought this one looked familiar. Cool bike.
Click to expand...

Rocky Mountain Fan
Absolutely A1 top job there. The schwalbe tyres look great on it too. Well done that man.
You must log in or register to reply here.