I am pretty sure this is the first of these frames posted on RB. This is an aluminum Cameron Frame built by Harv Cameron in his East End Toronto shop around 1987-88. A couple of people think it could be a couple years older, but I don’t know. It had a Deore Headset in it when I got it and Cameron did not put serial numbers on his early bikes. He put his phone number … rolling business card! There is next to nothing on Cameron bikes online. Part of the fun of this build will be the learning. I really like this frame for what it represents. It’s insanely rare but likely not overly valuable. If you are from Toronto and grew up MTBing this is a bit of your history. If not, hopefully you’ll appreciate it to

Anyway here’s the frame … I’m going to bring it back its former glory blah blah blah. You can stop here if you want to just see something you’ve likely never seen before. If you care to read up a bit on what I have learned [been told] and will continue to research feel free. 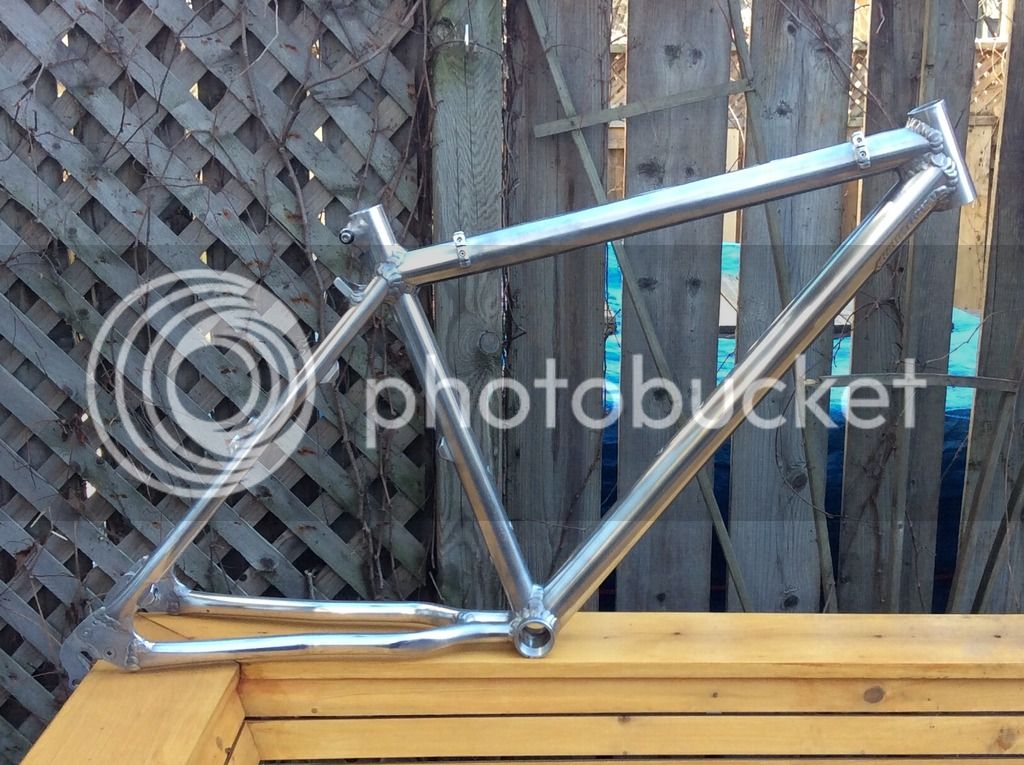 From talking to my local bike nerd conglomerate this is what I have discovered about Cameron bikes. This is sort of a work in progress so indulge me if I make some errors on dates. There is little to no documented information on Cameron bikes. Including this frame, there are two pictures of Cameron bikes online.

Harv Cameron was a trained engineer, machinist, and CAD designer. His bread and butter was aluminum machine work and engineering, but he had a passion for bicycles. The bicycle portion his business was never a real money maker for him. It was more of a side project he enjoyed. Some effort was made to turn the Cameron brand into something culminating with a full suspension design in 1994 that was reviewed well, but never made it outside of Ontario for reasons I’ll get into later.

Cameron began messing around with bicycle designs in the early 80s. He built one-off frames and tried odd things like suspension on road bikes just for the heck of it. He began producing MTB frames, forks, stems, and other custom order machine bits for the local MTB community in Southern Ontario around 1984. Harv developed some interesting ideas from building and messing around with other people bikes. He got to see a variety of bikes go through his shop and he borrowed, stole, and refined a lot of parts. None of Cameron’s early work was serial numbered or marked … it was almost all custom.

Enter CycleLogic in Toronto. John Calladine opened the well-known MTB specialty shop catering to wealthy Leaside and North Toronto boomers and their children in 1986. I actually bought my first bike there as a kid in 1991-2. John let me ride every bike in the shop I wanted, and took me on tons test rides. He seemed to understand the basic demographics of the area. MTB was rising in popularity in Toronto. The Don was becoming a hot sport for riding and he had a pile of rich kids to sell to. Not surprisingly he did pretty well.

Back to Cameron. I managed to get a hold of John and talked with him about his shop and shared some memories. He recalls Harv Cameron rolled into his shop with a bull moose handlebar he had made out of aluminum with some fancy CNC bits around 1986. John was blown away by it and the weight, and that started their relationship. CycleLogic was the sole dealer for Cameron bikes and parts. John mentioned that Harv never really considered himself much of a welder as evidence by his early work on my frame, but his hardtails were some of the best riding bikes he sold. Almost everyone in the shop had access to the best of the best. Most rode a Cameron in the late 80s. 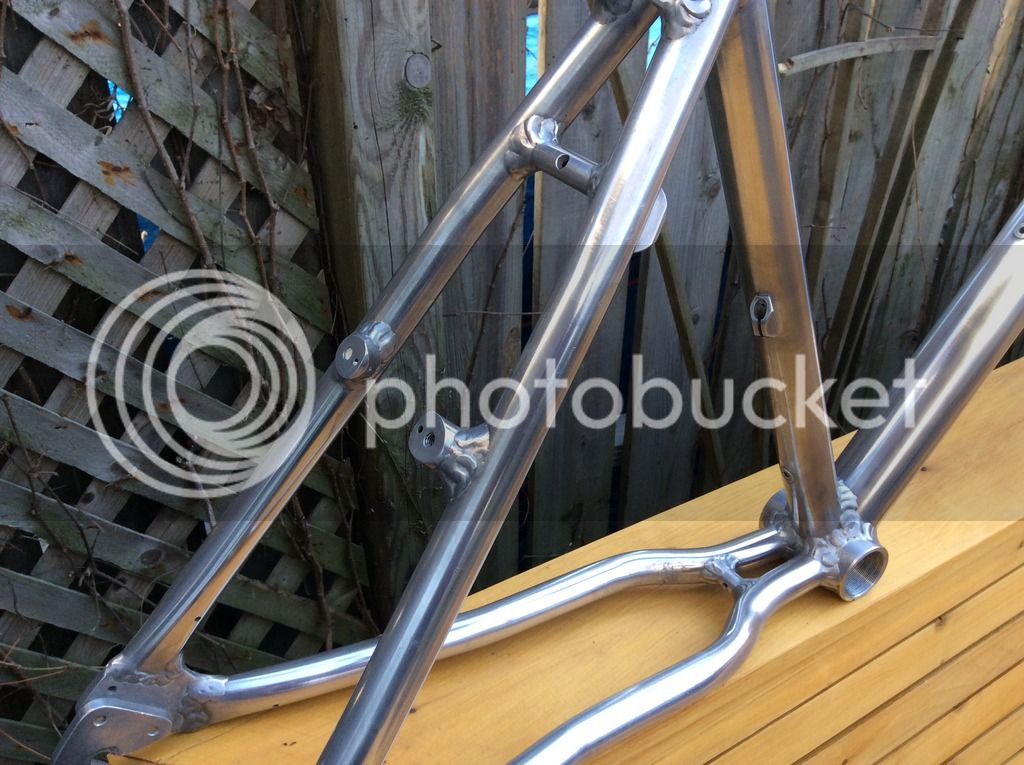 Harv began grinding down his welds a la Klein and Cannondale around 1988-9. Most of the bikes were bare aluminum but some were powdered coated black like this very cool early e-stays bike from 1988: 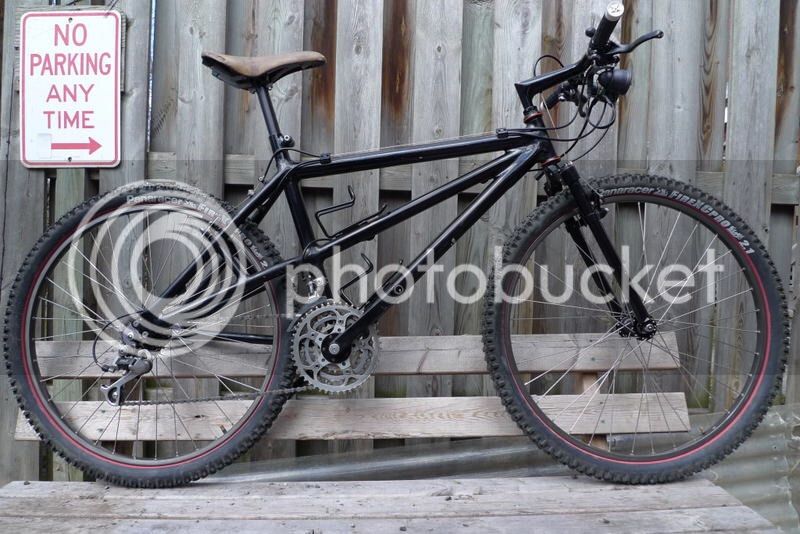 John and my local bike historians also recall some of the innovative stuff he was doing. Aluminum was still in its early stage of use for MTBs and people were less than sold on it as a construction material. Much of what he was doing was ahead of its time for 1985-7. 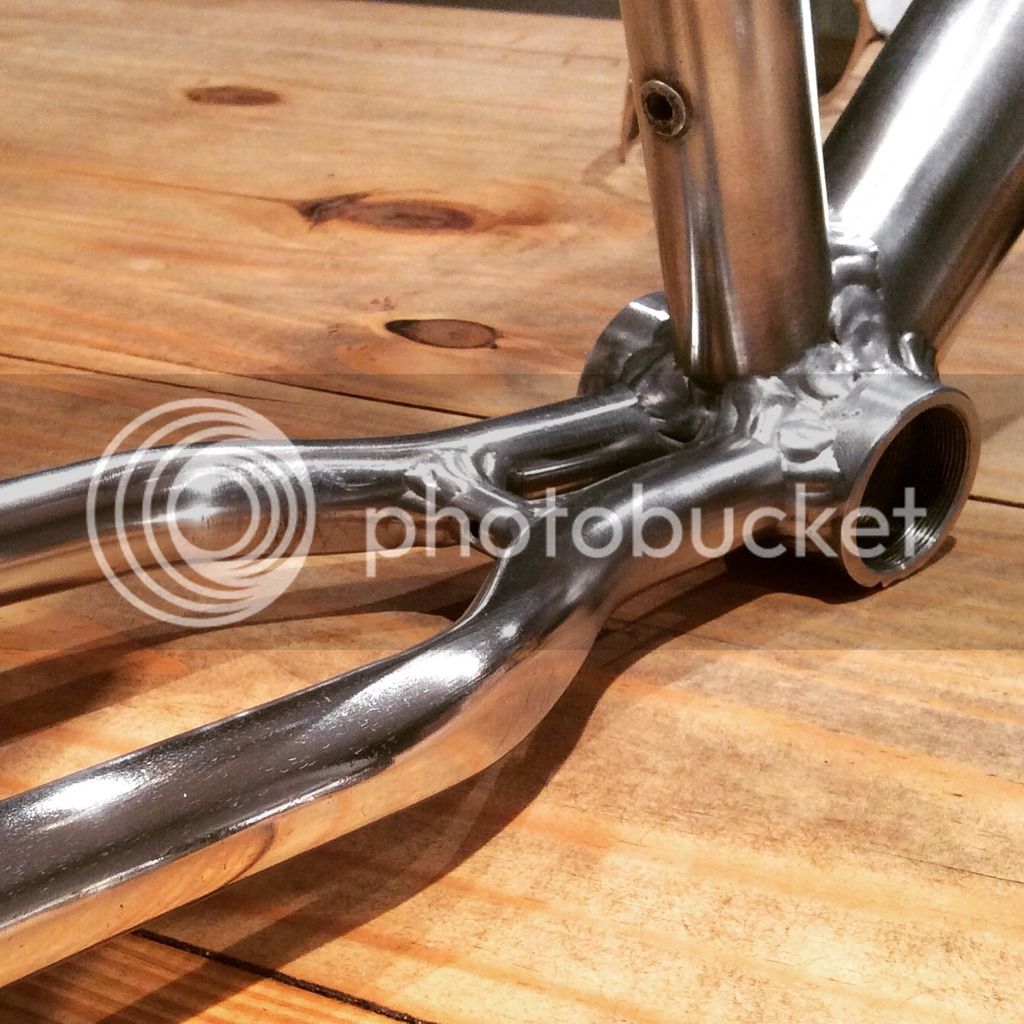 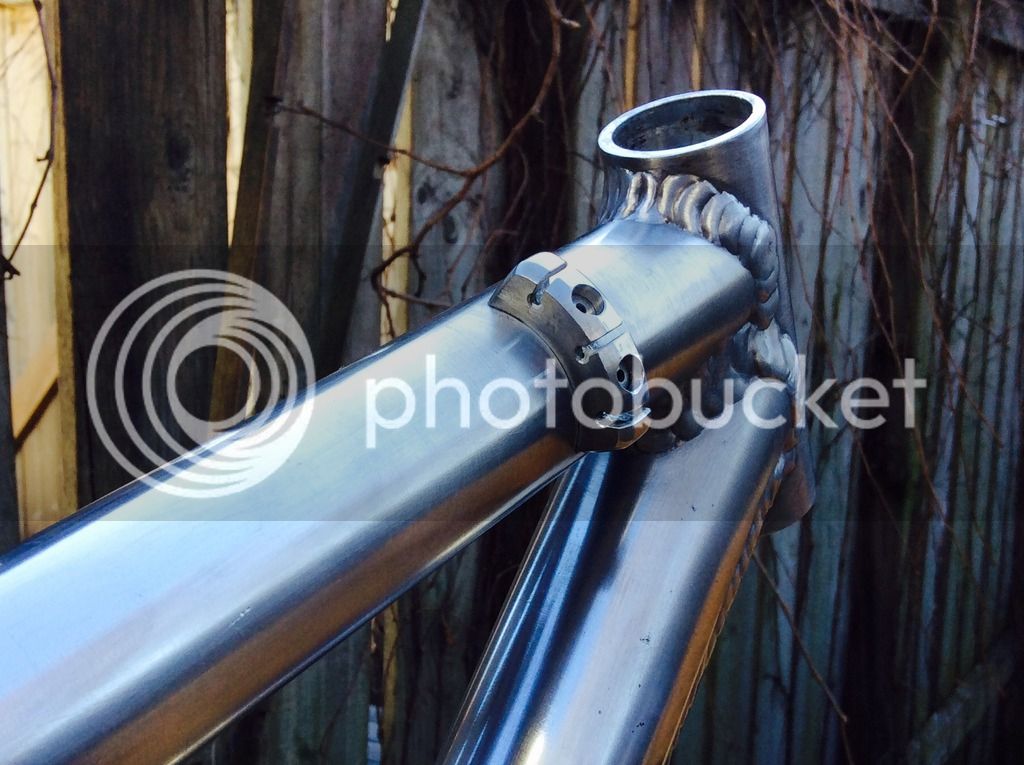 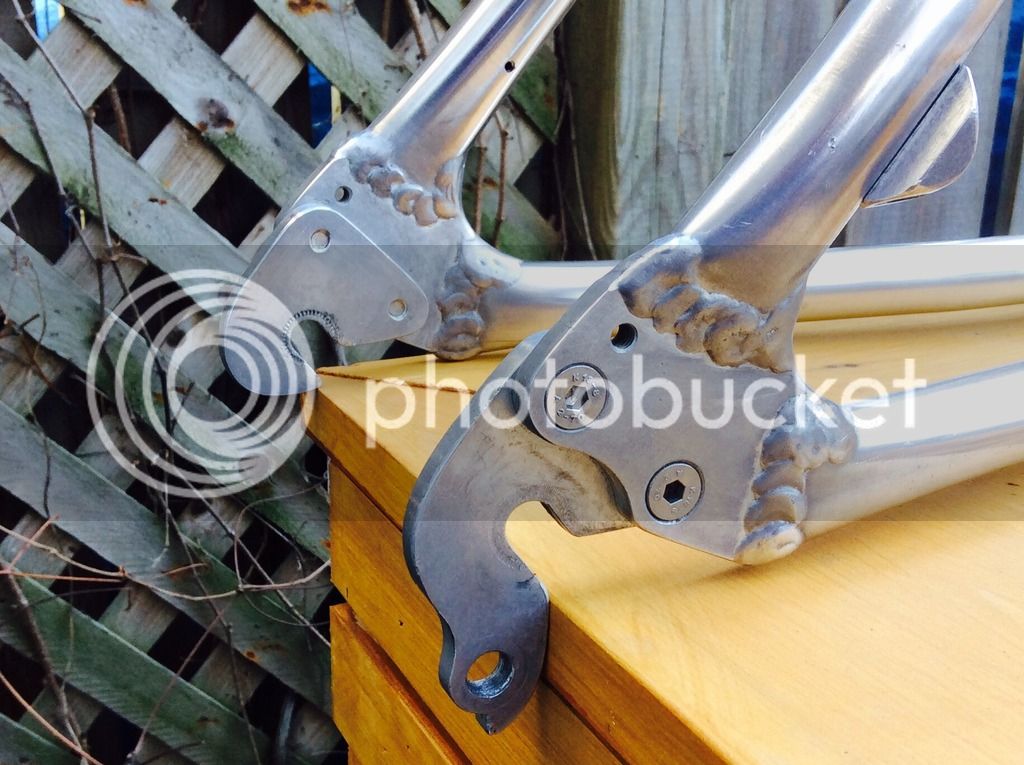 Cameron also built some of the first integrated bar-stem combos around 1987. There are probably more of these than frames as quite a few made it onto local bikes. Shutter actually had one of these. We didn’t know what it was before he sold it. I wish I knew … would have been perfect for my build! 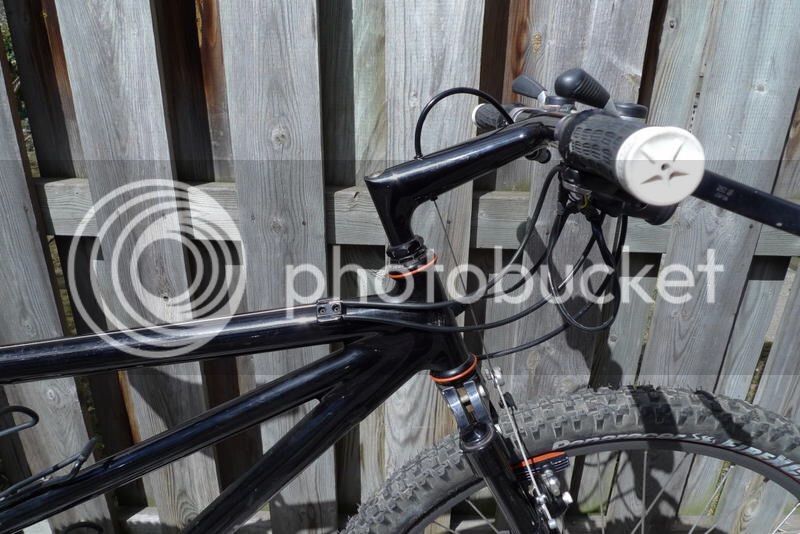 Cameron was still doing custom milling and machining for the local MTB community into the late 90s (maybe later). He also developed and sold some of the nicest frame alignment stands ever built. One is still used at Mariposa to this day. They were pricy.

Cameron was mainly interested in the design of bikes and messing around with new ideas. In the early 90s it was all about full suspension. CycleLogic was an early dealer for Mantis and ProFlex in the late 80s and Cameron took their designs and reworked them into aluminum creations. The usual innovation meets borrow/steal of ideas. The folks at CycleLogic rode these bikes and tested them. Many of those frames broke. The design and stress on the aluminum was too much. These were never really sold to the general public unless someone really wanted one. Most were test mules. After a while Cameron and John came to a design they were ready to market. Cameron did not want to do the welding so they set about outsourcing the job. Some frames were built and MBA tested out the first North American known CAMERON in their Sept. 1994 issue … anyone got it? 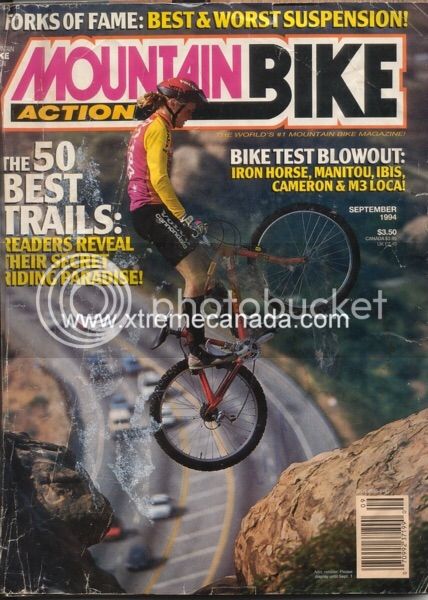 Right about the same time CycleLogic and the other local smaller shops were feeling the economic pinch of the time, and a certain large new “Source” to get bikes from locally. There were new restrictions on riding in the Don and MTB was on the decline. CycleLogic closed its doors and the Cameron FS bike never really got off the ground. Some still exist. I hope to see one in the aluminum in the next few weeks

Harv Cameron continued as an engineer and still enjoyed working on bikes past 2000. Among several positive references, I found a post that said he was a “flash in the pan”. He was deeply involved in the Toronto MTB scene for over two decades. He never really sought much in the way of notoriety and was happy to be a bit of a local secret.

Harv Cameron died 2-3 years ago. His old home was sold and is now being torn down for a new one. Hopefully the family kept the railing outside his house. Harv welded it and it looked like one of his frames. RIP.

signing up for the ride.
I remember reading about Cameron's. I'm pretty sure I have that mag.
will check when back at work Monday.
love the e-stay.


Retro_Roy said:
signing up for the ride.
I remember reading about Cameron's. I'm pretty sure I have that mag.
will check when back at work Monday.
love the e-stay.
Click to expand...

That e stay is awesome. I wonder how many he made.

It be great to see that test.

I have been prepping parts for the build. I restored some xt732 cantis for it: 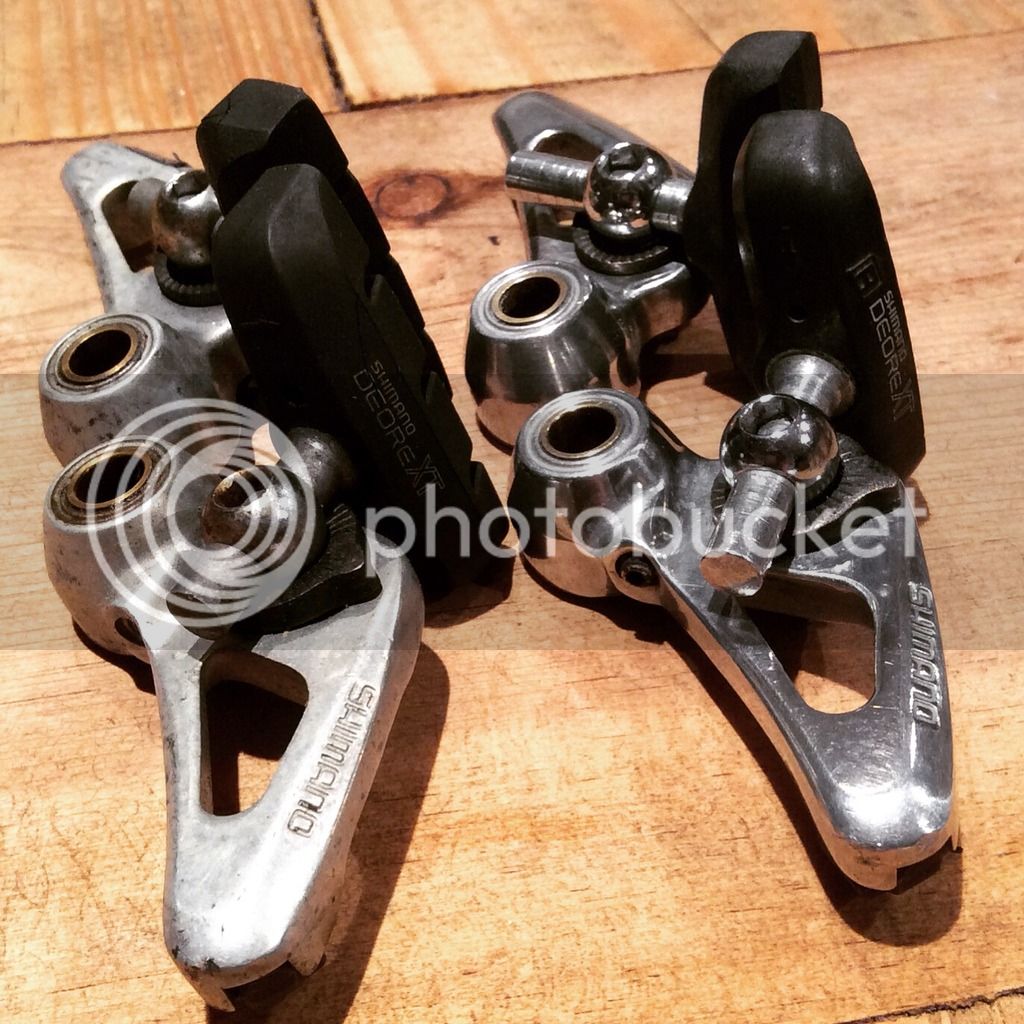 found my copy of the magazine.
article is on a full suspension model.

Nice story. Very interesting. The frame really doesn't look like one from the 80s.


Retro_Roy":1fnx9nod said:
found my copy of the magazine.
article is on a full suspension model.
Click to expand...

Awesome! Could you scan it for me? That is the bike Cameron and Cyclelogic build for an actual production bike. Things kind of fell apart on them soon after.


Thias":3h36lmdi said:
Nice story. Very interesting. The frame really doesn't look like one from the 80s.

I know! I think a lot of the 80s aluminum bikes were pretty advanced for the time out of necessity. Lot of trial and error (more of that latter )

Thanks for sharing, really good story.
You must log in or register to reply here.