Been surfing the forums for a while and my current Fixie build is nearly complete so decided to get some pics up.

Peugeot Talisman 1984 (I believe) Carbolite 103 Gas Piper, 62cm Frame so a little big for me in reality but heyho: 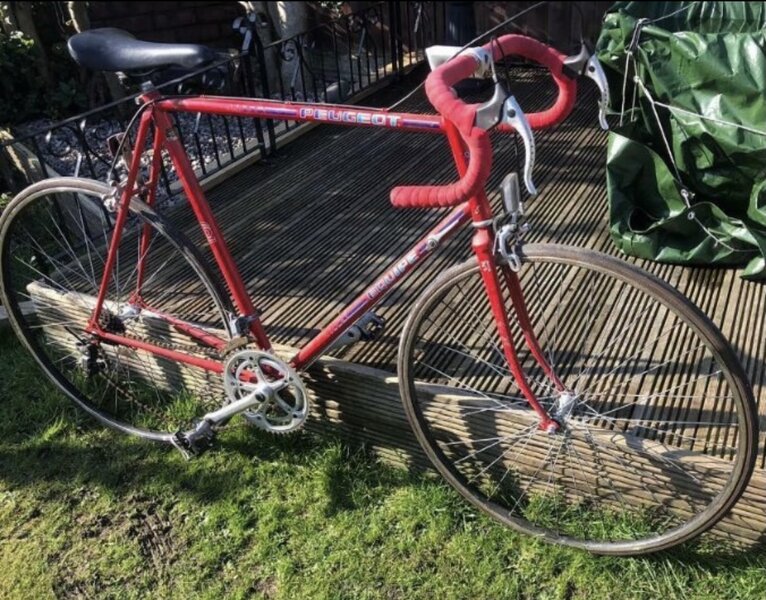 I knew from the off I was going for a fixed gear build after enjoying using a Ribble Pista Track bike I picked up last year. So I removed handlebars, brake levers, brakes, simplex derailleurs, cranks and chain wheels etc and stuck them all on eBay, getting around £45 post fees. 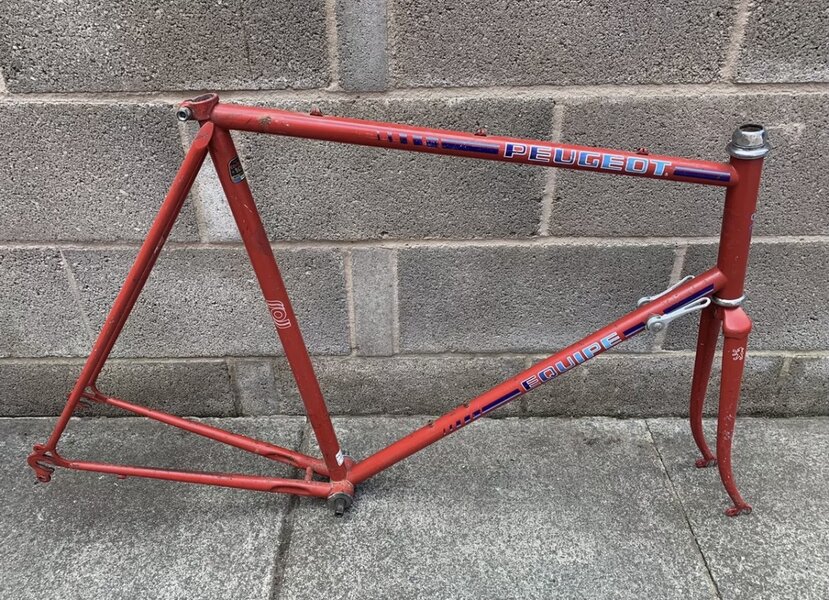 I then randomly picked up a £40 bike on eBay which the seller had clearly inherited and knew nothing about. I recognised the stickers on the wheels in the pic to be mavic so pretty much bought it for those. Once I picked up I saw the frame had bad cracks in the head tube so was scrap but it was running Dura Ace RD-7700 short Cage derailleur, Dura Ace ST-7700 shifters. Ultegra front derailleur, Ultegra Crank with strong light chainrings. Ultegra BB-6500 sealed bottom bracket, campagnolo headset and ofcourse the Mavic wheels. Again I stripped this chucked the frame and put the group set on eBay for tidy profit. The shifters alone selling for £87. I kept the crank, chainring, BB and headset and have put these on to the Peugeot Frame, as well as adding a Saddle I had from an old Ribble and painting the battered 24mm Seatpost to tidy it up. 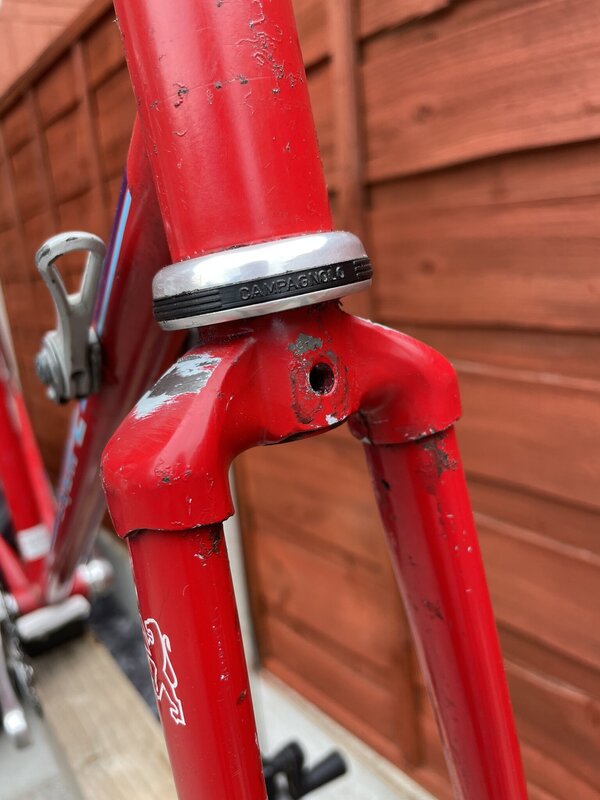 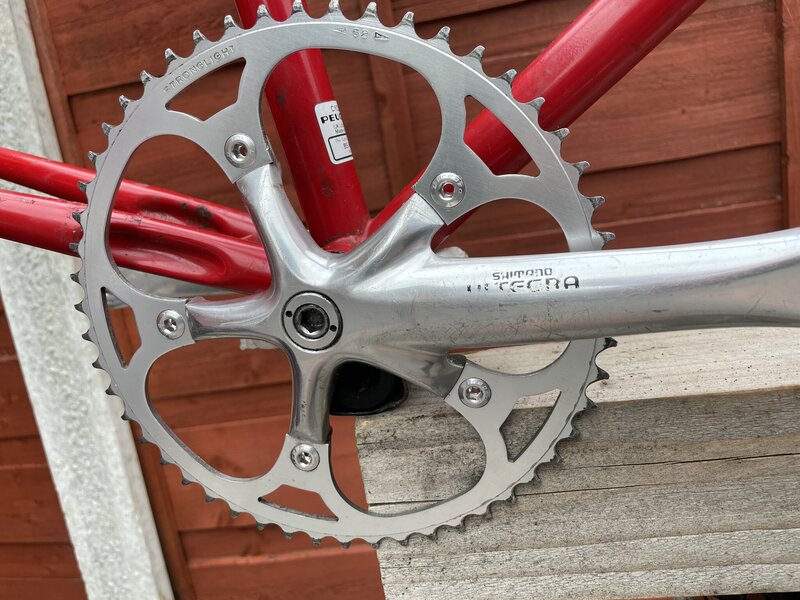 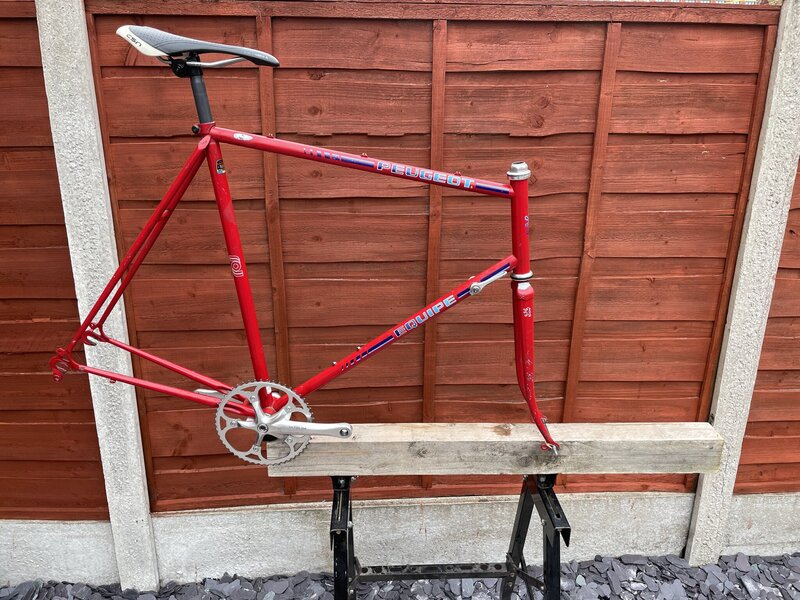 I then set about eBay and picked up some Fixie wheels for it at a cheap price and an SR 60mm Stem to stick on. I refurbed the original pedals from the Peugeot (GT85, Cleaning and a big hammer to straighten the frames out

) and stuck the handlebars on I had sat in the shed.

Here she is as it stands today, I just need to do the Bar Tape over the weekend and give it a general tidy up and clean, tighten the chain line a little and she will be ready for a maiden voyage. 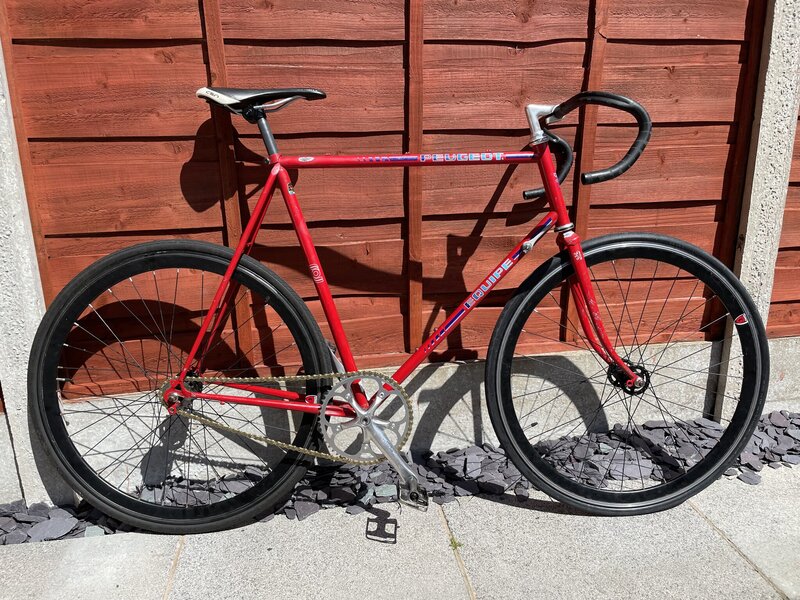 In all I think the project stands me in a little profit rather than spending anything, with the bits I’ve sold etc.
Next I am going to go round the frame and remove any further rust (done some already) and then top coat it, I don’t mind leaving some battle scars on the bike as I would like to keep the original Paint rather than have it repainted/restored.

I will probably add a brake just for a bit of safety and may put my Look pedals on for any big rides to be clipped in etc.
Granted May not be to everyone’s liking but I love it so far.
Last edited: Jul 16, 2021

Bar Tape on and a few steady miles in the sunshine… 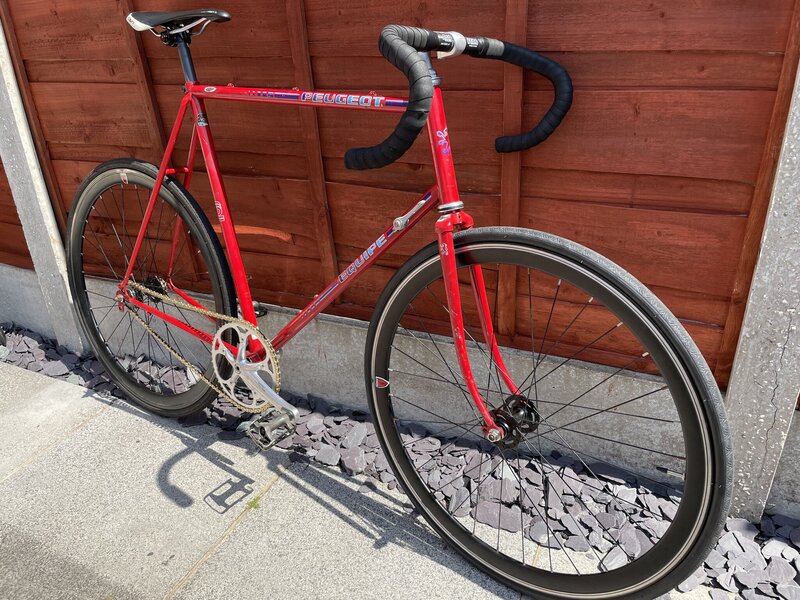 Sweet! I'm digging the red and black look, and it looks pretty proportional despite the big frame.

Lickskillet said:
Sweet! I'm digging the red and black look, and it looks pretty proportional despite the big frame.
Click to expand...

Cheers. I won’t lie it doesn’t feel the comfiest but then it is slightly too big and the saddle I’ve used for now is off a Ribble Track bike so not meant for comfort

Thinking a same era Turbo or something would be better for it.
On the look out for my next project (Raleigh Banana Fixed Gear ) and will be sourcing a better sized Frame this time