I believe this is my first road bike post on RB. I love vintage road bikes as much as vintage MTBs. I’ve been the lucky owner of an SLX Marinoni Special since 1990 but this is a story about my 1984 Marinoni.

This bike was purchased in the 90s by my Dad with my guidance. We went into Cambie cycles in Vancouver and right away I told my Dad “If it fits and you like the ride, get this one!” It did not have a Super Record RD or campy shifting, brakes or seatpost. It had indexed Shimano rear shifting and Modolo brakes. But the rest of the Super Record/Record parts were still there from original build (Modolos were most likely original).

My Dad decided in the 2000s to upgrade to a Trek Carbon wonder bike with Ultegra (not a bad ride) and offered the Marinoni for my older brother and I to fight over. My Brother had no clue what this bike was and after agreeing to part with one of my bikes to keep him happy I brought the 84’ Marinoni into my small (at the time stable).

The bike spent a few years as a single speed with 700C knobbie tires at my home away from home trailer in Birch Bay Washington State complete with Klein MC1 flat handlebar/stem. It was light and road like a dream in this form. 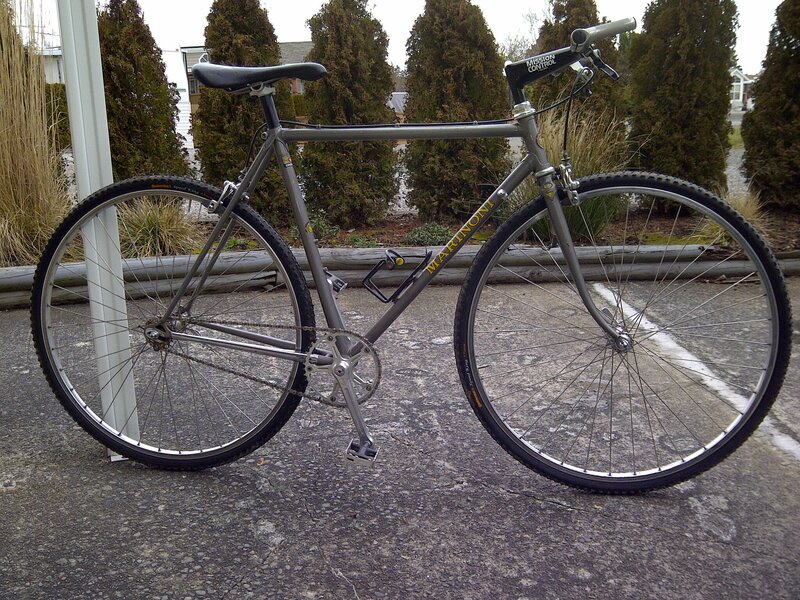 One day a family friend who’s father in law was a huge cycling enthusiast learned about my love for vintage campy parts and offered me to come by for a glass of wine and to pick through his parts, take what I wanted for free as he would never have any use for them. I now had a Super Record RD, C-Record retro-friction gear levers, Triomphe brake calipers and levers. I had picked up a 90s record seatpost which is kind of Super Record’esk without the fluting. The Triomphe brakes and modern Campy seatpost meant I could put this bike back to (roughly) how is was meant to be. I purposely made the decision to go with clips/straps, friction shifting and use non-aero brake cable routing to keep with the early 80s vibe. Doesn’t hurt that I still can ride some Diadora vintage bare bone leather shoes I’ve been riding (off and on) since the late 80s. They have survived surprising well. They were converted to accept clipless cleats at one point and I believe I tosses the cleats needed. Luckily I managed to source a modern cleat for use with clips/straps.

In the current form seen below this bike gets lots of use while being stored at my Birch Bay trailer. It is an unbelievable joy to complete a 22km loop made up of mostly country roads and seaside roadways on a sunny day. At 52cm the frame is a couple centimeters smaller than my size. The seatpost position and slightly longer stem still manage to give me a riding position I really like.

The bike weights in at 23lb 10oz. It once weighed more than a pound less (and much less than that as a single speed). The 25C tires, campy skewers put back on and saddle swap from a Flite added some weight but really contribute to the character (and ride).

I’ve ridden my Dad’s Trek carbon wonder bike a few times. Nice bike. Would not trade it for this vintage steel wonder bike any day. Just something about the ride that’s hard to put my finger on, these vintage lugged steel bikes are special. 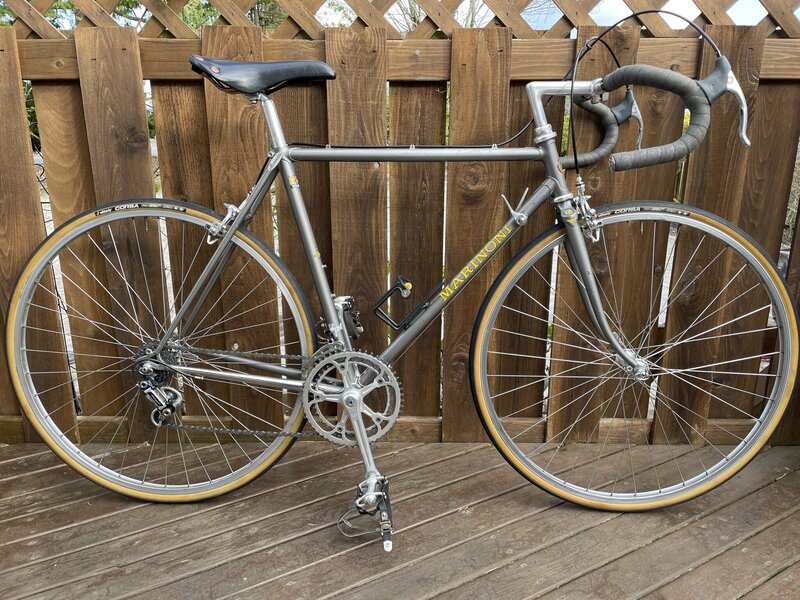 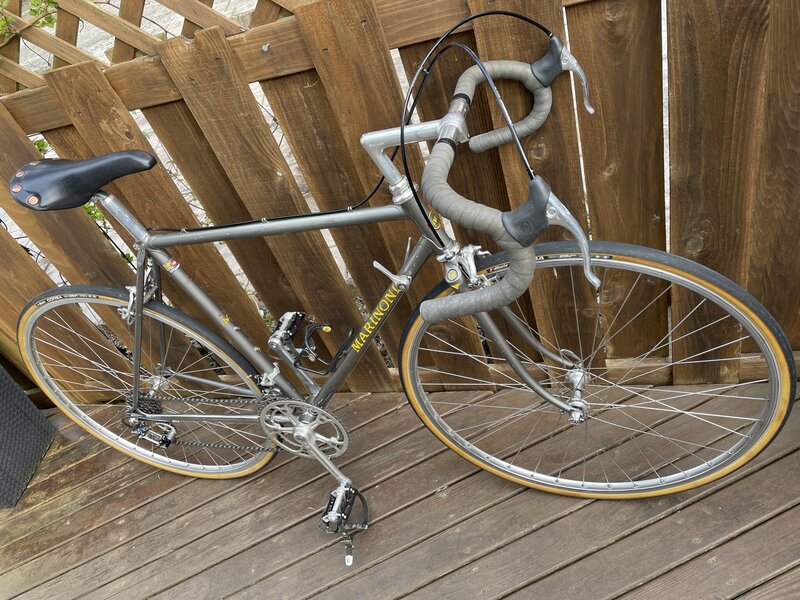 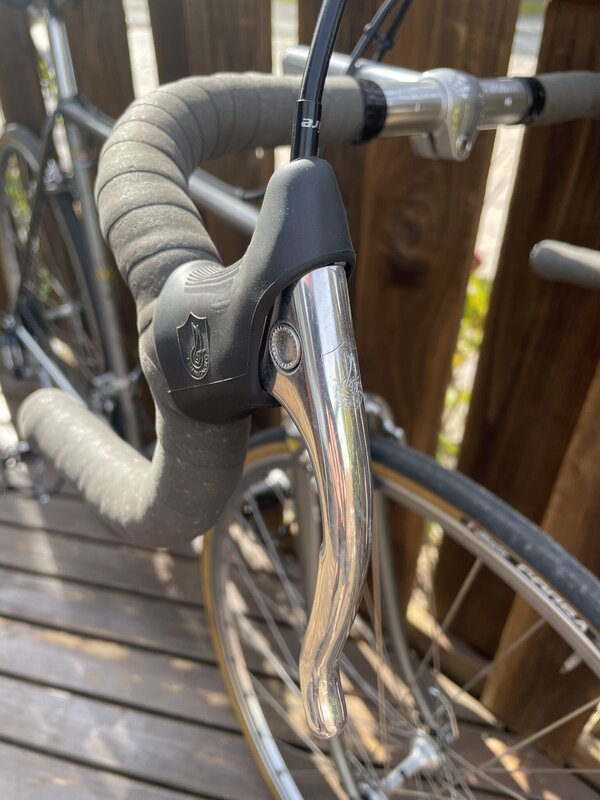 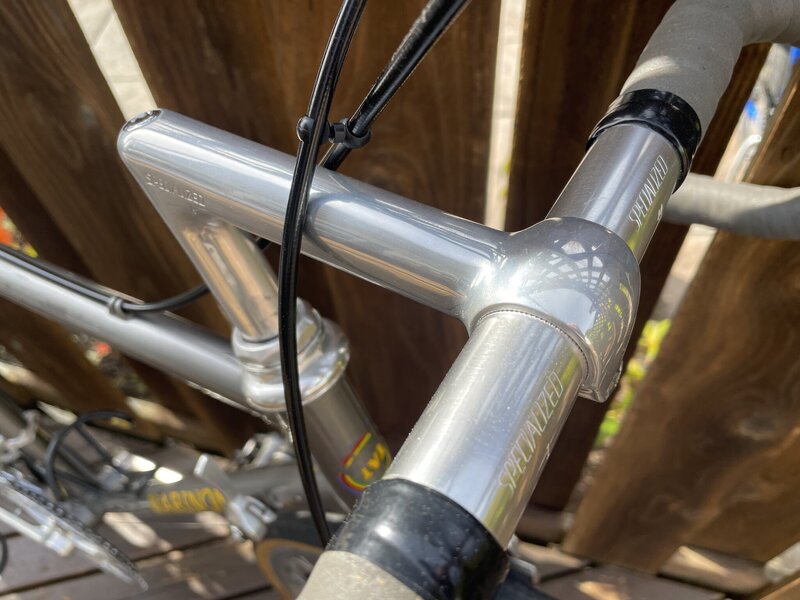 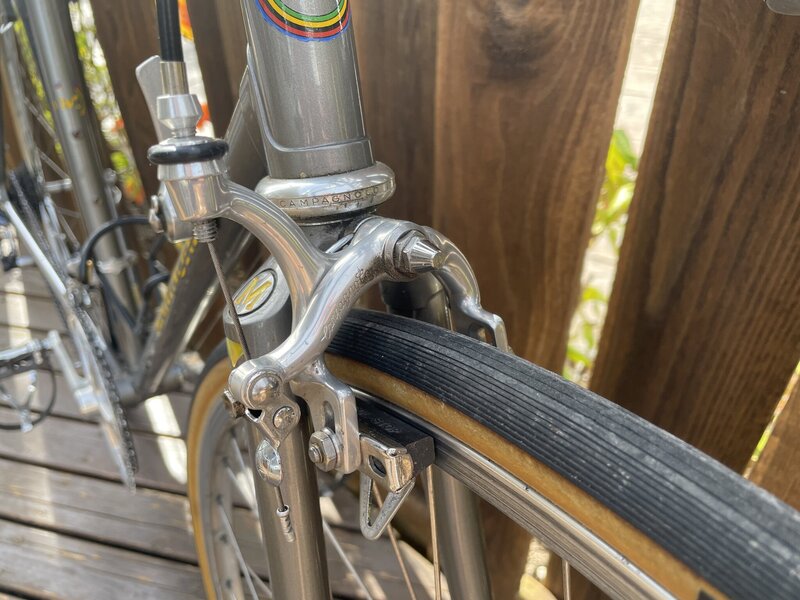 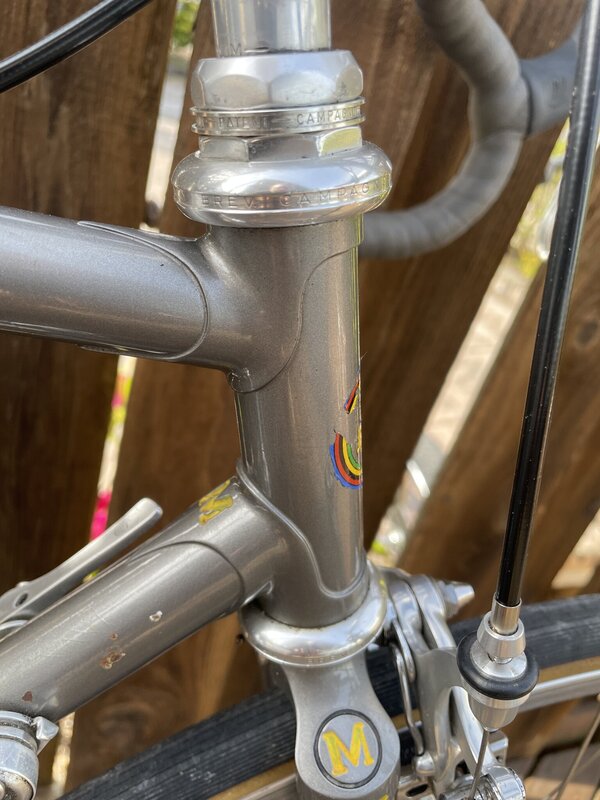 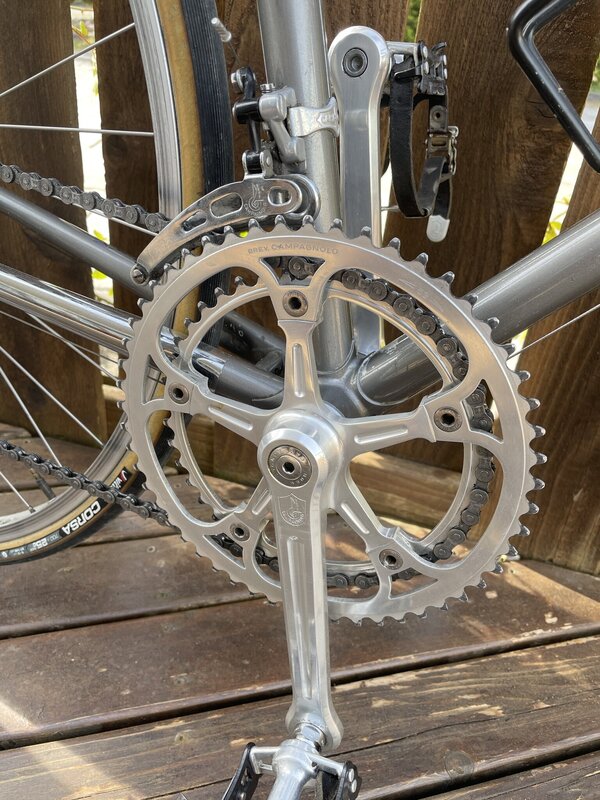 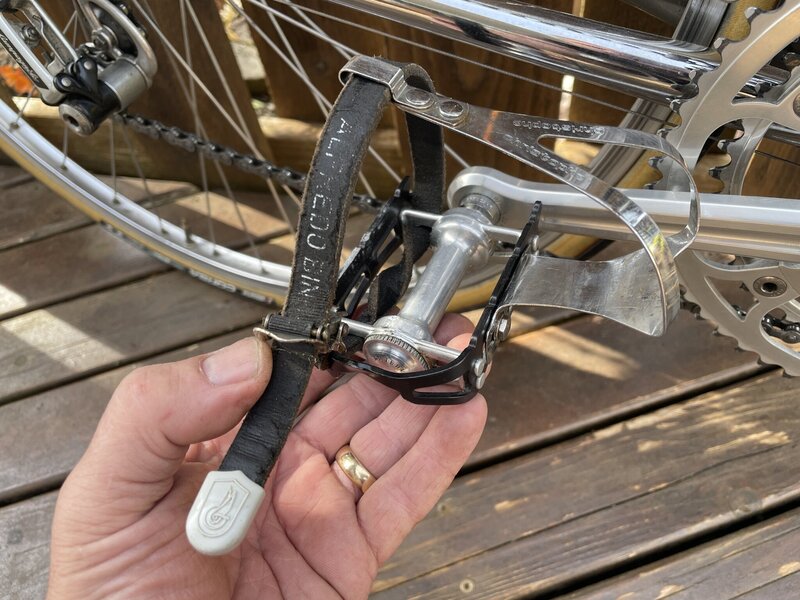 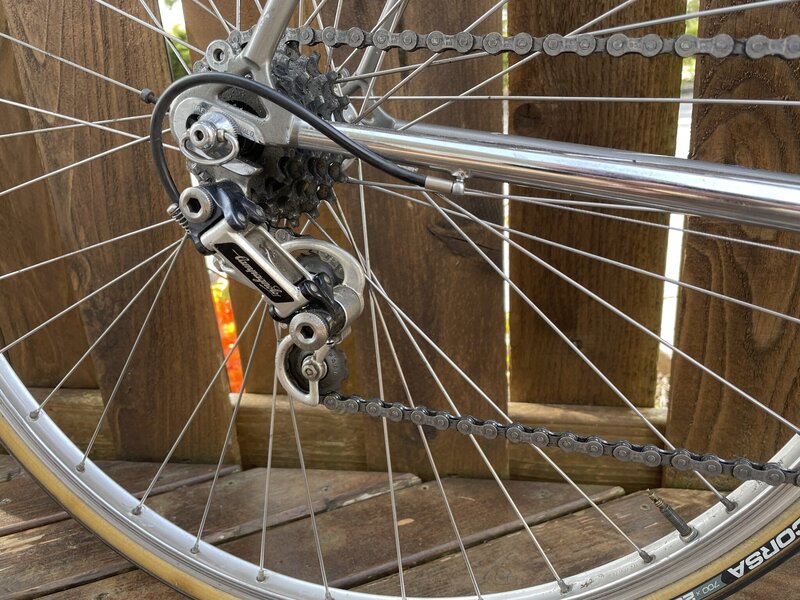 Selle San Marco Regal Girardi saddle: bit of a story. Picked up for 5-10$ due to ultra used condition. It was my most challenging leather saddle recovering to date, dealing with the rivets, etc but I’m very happy with the outcome, probably the most comfortable saddle I’ve ridden, lightweight it is not though. 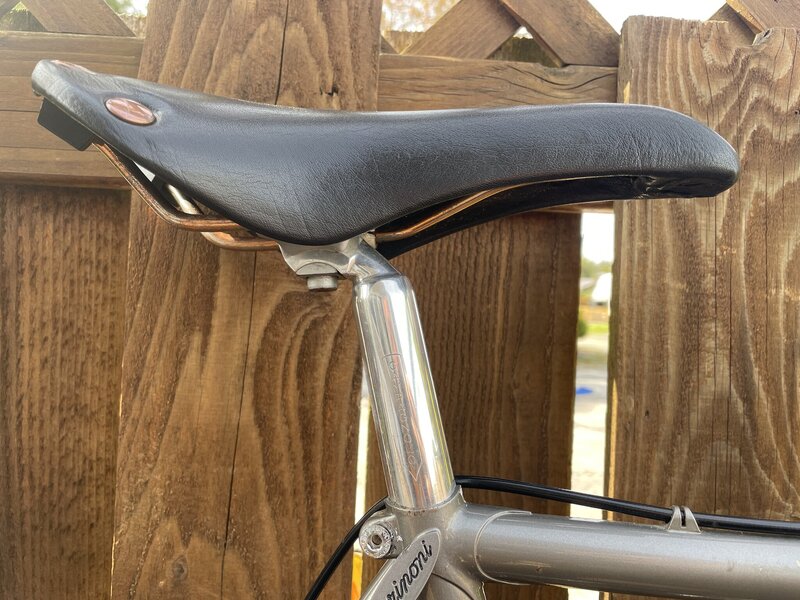 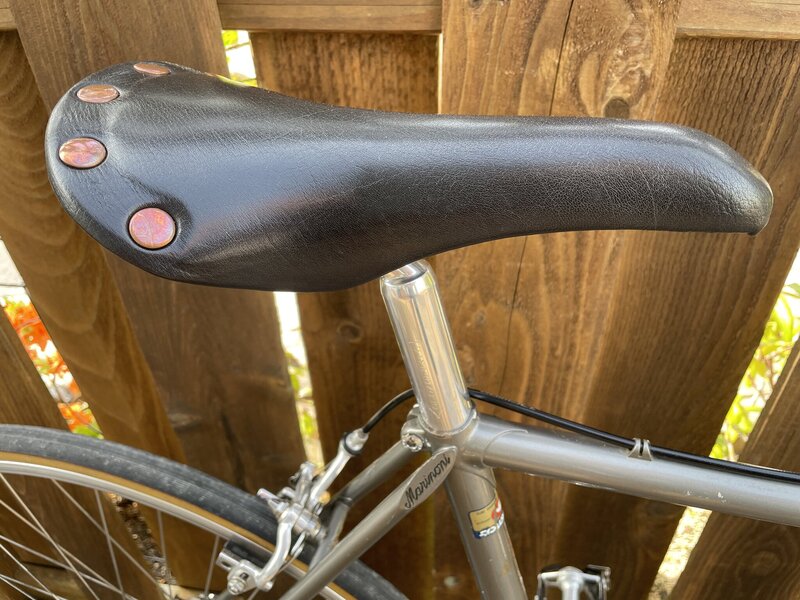 Very nice! The only thing I'd change (apart from making it my size

) would be that bottle cage for a silver one.
D

Nice. I keep looking at used Marinoni's on Craigslist and thinking about adding one to my collection, but my wife would kill me.

Looks fantastic and I'm sure rides beautifully. Great to read your story too!
You must log in or register to reply here.

J
Questions from a noob about buying a Vintage road bike